Disney is in the Details: A Closer Look at Buena Vista Street

Spoiler warning: This article contains details about the new Cars Land; readers wishing to avoid spoilers should skip this article.

[Note: All photographs for this article were taken during the annual passholder previews of Cars Land and Buena Vista Street on Saturday, June 9, 2012. The author paid for admission to this event.]

Yesterday, I shared some of the fine details in Cars Land that casual visitors may overlook, but are worth seeking out if you're a Disney or Pixar fan. Today, let me showcase some of the design and prop gems of Buena Vista Street I discovered during the annual passholder previews of the new area.

Designers had not yet finished decorating Buena Vista Street when the previews began so this article may be a bit premature, but it should still give you an idea of how much attention Imagineers put into the to story as they rebuilt the main entrance of Disney California Adventure.

Like some Pixar references found in Cars Land, it will help if you know a bit of Disney history to appreciate all of the details in Buena Vista Street. Though these buildings are not decorated with the tribute windows found on Disneyland's Main Street, U.S.A., there are plenty of nods to people and places that influenced Walt Disney.

The most obvious is the list of instructors on the Atwater School of Art and Animation sign. Messrs. Clark, Larson, Johnston, Thomas, Kimball, Davis, Kahl, Lounsbery, and Reitherman are better known as Walt Disney's "Nine Old Men," the core group of Disney animators responsible for Snow White and the Seven Dwarfs and later animated features. 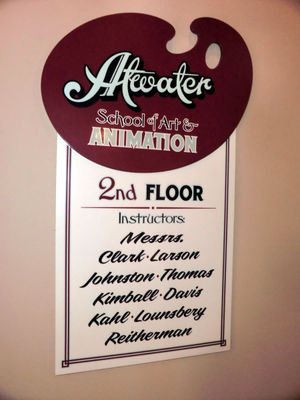 The Atwater School of Art & Animation sign pays tribute to some of Walt Disney's earliest animators. Photo by Adrienne Vincent-Phoenix.

The numbers of the Red Car Trolleys are direct Disney references—car 623 refers to the month and year (June 1923) that Walt Disney came to Los Angeles, while car 717 refers to the July 17 grand opening of Disneyland. 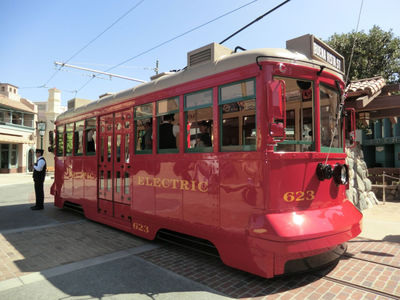 Look carefully at the decorative moldings above Mortimer's Market, and you'll spot tiny mice carved into the design. Mortimer was Walt Disney's first choice to name his new animated mouse character, but Walt's wife, Lillian suggested the name Mickey instead. 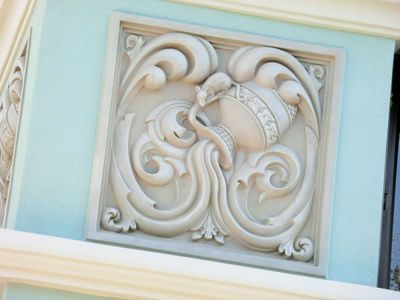 While not a Disney reference, the molding above Trolley Treats is also worth a look, with two bears in a ring of stars. The display window of the store features a model of Rock Candy Mountain, a never-built element of Disneyland's Storybook Land Canal Boats. Inside, the highest shelves of the store's south wall are decorated with piles of toy train tracks and cars, possibly a nod to the former Engine-Ears Toys store at this location. 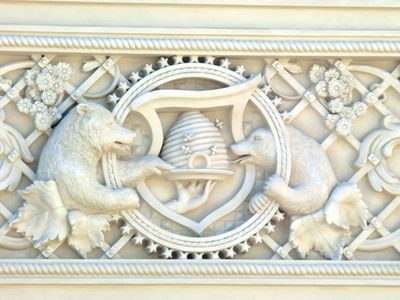 The bears and star in the carved detail above Trolley Treats evoke the California state flag. Photo by Adrienne Vincent-Phoenix. 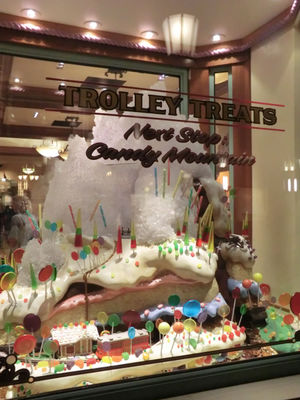 The window of Trolley Treats displays a model of Rock Candy Mountain. Photo by Adrienne Vincent-Phoenix. 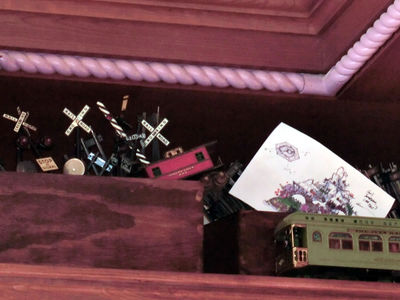 Some have claimed that one element of DCA's original entrance was reused for Buena Vista Street, but we've compared photos and feel comfortable stating that the "Candy" sign outside Trolley Treats is not the same one that once hung outside the former Greetings from California store.

The Julius Katz & Sons stores are a reference to Julius the Cat from The Alice Comedies. One section of the store is themed as a watch repair shop, with glass displays of watchmaker's tools. The other section is ostensibly an appliance shop, and the upper shelves of the store are filled with broken appliances in need of repair. The repair tags on each item are filled with puns and jokes—I imagine the designers spent several wonderful hours writing these tags. 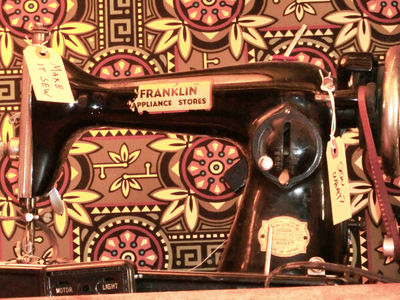 The broken appliances displayed in Julius Katz & Sons bear humorous repair tags like "Make it Sew" and "Sew What?" Photo by Adrienne Vincent-Phoenix.

Kingswell Camera Shop is a reference to the street where Walt and Roy Disney opened the Disney Bros. Cartoon Studio. Kodak was an original Disneyland sponsor in 1955, and this new store in Disney California Adventure is filled with vintage Kodak advertising and signs. A display case on the north wall of the store is labeled "our satisfied customers," and is filled with black-and-white photos. (If any Disney designers are reading this, I'd love the back story on those photos - the cast members in the store had no idea what those dozens of photos represent).

Also on display is a black and white photo of a Rose Parade float. I spent my college years building floats with the Cal Poly Universities, and I was instantly curious to learn more. With the help of a MousePlanet reader, I was able to identify the float as a 1948 entry into the Tournament of Roses Parade. Though the photo is black and white, the float promotes Cinecolor motion picture film, and is titled "Our Golden West in Color Motion Pictures." 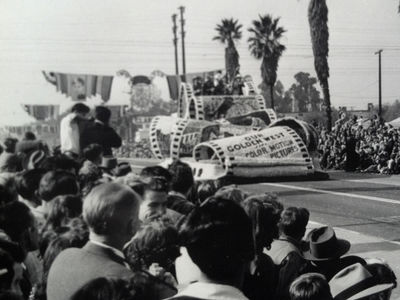 Researching the origins of this photo led to a fascinating lesson in animation and film history. Photo by Adrienne Vincent-Phoenix.

These are the little discoveries that are so fascinating to me, seemingly insignificant decorations that really point to a much richer history. This level of detail is what illustrates for me the core difference between the old and new Disney California Adventure. Where DCA 2001 had a theme, DCA 2012 has a story, and you can feel the distinction the moment you step onto the street.

The last gem is something I'll leave for you to experience in person during your next visit to Buena Vista Street. Look for the second-story sign for the Atwater School of Art and Animation, then grab a seat on the nearest bench and wait a while. If you're lucky, you'll hear a young man named Walter describe a story called "The Princess and the Little Men" to his animation class. The class ends before he can finish his pitch—but you just need look down the street to the Carthay Circle Theatre to know how this story ends.