Adventures by Disney: Seeing is Believing Part 3 - Traveling with your Ohana

When MousePlanet offered me the chance to take the assignment of a four-person Media Sample of the Quest for the West tour, my sons agreed to try out our own version of “Mommy Summer Camp” without Dad. Typically, we all travel together, and often with friends. So when we had the opportunity to travel on an Adventures by Disney tour, I naturally wondered how my three sons would fare among a group of total strangers. My concerns were unwarranted, however, because by the end of the trip, everyone on the tour became "ohana"—that is, a family, "where nobody gets left behind, or forgotten."

Adventures by Disney offers tours worldwide, throughout six continents. One of the unique aspects of an Adventures by Disney tour arises from the special attention given to families and children. From the schedule of activities on the tour to the high ratio of two Adventure Guides for only 27 to 40 guests, Adventures by Disney provides an abundance of opportunities for children traveling with their parents (for the rest of my articles about this trip, see "Wyoming Bound!" for my pre-trip thoughts, then part 1, "Adventure in Wyoming," and part 2, "What to Expect on a Tour"). 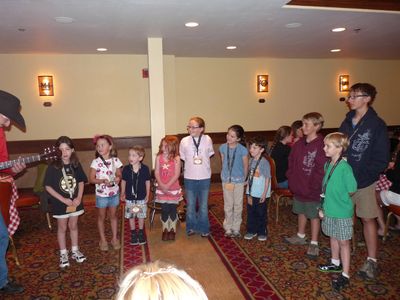 The children gather at the welcoming dinner to provide sound effects as the evening’s entertainer engaged them with his song. Photo by Adrienne Krock.

From the beginning, the atmosphere of our Adventures by Disney tour felt like a family gathering. Just as families come in all shapes and sizes, so did our tour. Some members of our tour were single and others were married with no children at home, while those of us with children had kids representing a variety of age groups from 4 to 14. Adventures by Disney offered activities that appealed to each age group together and individually. 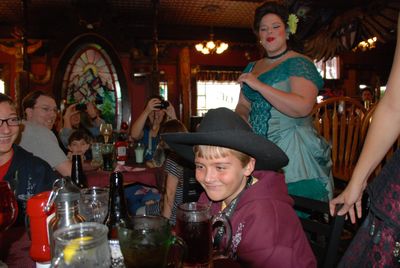 The cast of the Playhouse Theater’s production of Cat Ballou serenades Spencer Krock with “Great American Cowboy,” much to his mother’s delight. Spencer endures the experience. Photo published with Spencer Krock’s permission. Photo by Adrienne Krock.

The tour provided multiple interactive family-friendly shows, so everybody felt welcomed. During the welcoming dinner, a local Jackson Hole entertainer serenaded our group. When we finished dinner, he called up the children to supply the sound effects for his grand finale. The next day, we enjoyed lunch at the Playhouse Theater, where our servers serenaded our group.

Some activities, such as whitewater rafting and longer horseback rides, required a minimum age to participate. The tour made sure nobody felt left behind, by also offering alternative activities for those who did not meet those age guidelines, such as an alternative boat ride and a shorter, directly guided horseback ride. At the Grand Tetons, they offered alternatives for those who did not feel up to making the hike up to Hidden Falls. 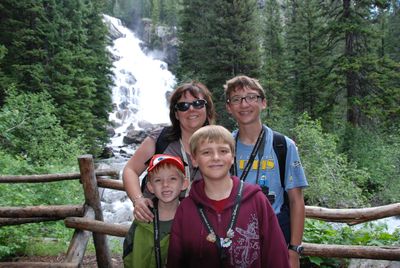 The Krock family pauses for a photo at the Hidden Falls near Lake Jenny in the Grand Teton National Park. Photo by Adrienne Krock.

Matthew (14) – "I liked everything on the trip but my favorite activity was the whitewater rafting because it was fun. I liked sitting on the edge of the boat and the waves. The views at the Hidden Falls in Grand Tetons were spectacular and Old Faithful was amazing!"

Spencer (11) – "My favorite part of the trip was jumping in the Snake River during the whitewater rafting. I liked having our Adventure Guide Drew on our raft because he made it easier to go in the river. I felt safe going in with someone else. I did not like the show at the Playhouse Theater because they were picking on me in the show."

Spencer does not like being the center of attention. The entertainers in the show serenaded Spencer during their production of “Great American Cowboy.” I thought it was hilarious. Spencer, my introvert, survived, but preferred the songs that focused on his brother instead.

Colin (8) – "I liked horseback riding the best, seeing the geysers at Yellowstone and the cabin at the Brooks Lake Lodge. I did not like sitting in the front row of the whitewater rafting boat. I had fun on the raft when I moved to the back of the boat."

Our rafting guide had one fleece blanket in his bag and shared it with Colin shortly into the trip. Unfortunately, the river quickly soaked the blanket. Moving further back in the boat proved to be the trick to improve his mood. Several of the women on the boat all tried to cheer up Colin. This story took on a life of its own through the rest of our trip together, among those of us who shared our raft.

Sometimes my children’s appetites amaze me. One moment they barely touch a meal; the next, they appear to fill bottomless pits. My teenager, naturally, clears platefuls of food. More and more, my 11year-old orders off the adult menu instead of the children’s menu. He took turns between adult and children’s menus throughout our tour without problem. Even during the kid-focused evenings, the boys ordered adult portions if they wanted. While all of my children enjoy trying new foods and sometimes surprise servers by their adventurous menu selections, the menus on our tour always offered basic selections so even the pickiest of eaters could find something they could eat. 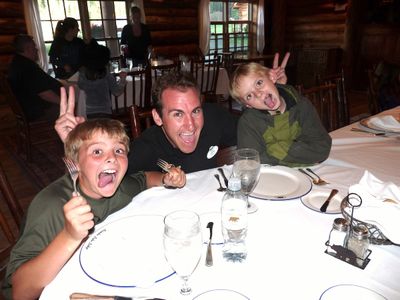 Matthew (14) – "I liked ordering game on the tour. I had venison, elk, buffalo and stag at different restaurants and it was all good. The huckleberry soda at the Playhouse Theater was good, too."

Spencer (11) – "I liked having game for dinner one night but sometimes I just wanted chicken nuggets and macaroni and cheese. My favorite meals were the breakfasts."

Colin (8) – "I had sarsaparilla in a bottle at the Playhouse Theater. The hotels were awesome. They had big rooms and big breakfasts. I liked the breakfast buffet at the Brooks Lake Lodge. I liked picking the food myself."

On occasion, we enjoyed buffets or partial buffets, where the servers brought plated entrees but our salads and side dishes came off a buffet. My boys love buffets both because they control what they goes on their plate and the portion sizes. 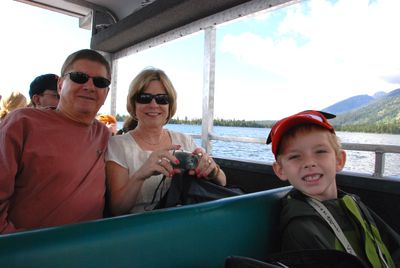 The group format gave everyone an opportunity to make new friends, which encouraged us to get to know those outside of our immediate family. After the first kid program, my 8-year-old made friends with Noah, a young man traveling with his family. Having a child closer to his maturity level than his older brothers really perked up Colin’s mood for the rest of the trip. One guest traveling without children sensed our family dynamic at the Brooks Lake Lodge. She took it upon herself to teach foosball to my middle son, Spencer, but with an agenda. She told me, “I’m going to teach him everything he needs to know to dominate his big brother at this game!” I laughed and took pictures. Throughout the group, children paired with other children their own ages or even with adults in other groups. 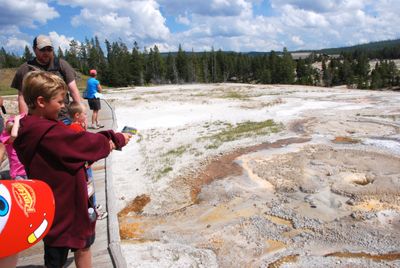 Spencer Krock aims a laser thermometer at the Anemone Geyser at Yellowstone. Photo by Adrienne Krock.

During our walk around the geysers near Old Faithful, the Adventure Guides pulled out laser thermometers for the children to share. All of the adults helped make sure that the children took turns sharing the thermometers, but more importantly, they interacted with the children to find out just how hot were the various geysers, mineral springs and even run-off streams.

Even though my husband stayed at home, I had plenty of help with the boys. One fellow traveller commented that they gained a bunch of moms as well as new brothers and sisters—just like a real ohana.

Thanks to the Adventure Guides and hotel staffs, I never needed to juggle our luggage while herding the boys. Outside of the airport and our hotel rooms, we never touched our luggage. The hotels provided very comfortable accommodations. The boys especially liked each having his own bed at the Brooks Lake Lodge. The schedule on the tour generally allowed for bedtime flexibility. Many nights, the official activities ended by 8:00 or 9:00 p.m., a decent vacation bedtime for younger children. The venues offered plenty to do for tour members who wanted to stay out later.

Matthew (14) – "It was easy to find people I got along with in the group. There was one lady from Florida who was really fun. I made more friends with some of the adults more than the kids but the adults were nice and fun to talk to."

Spencer (11) – "When we were out with the group it was fun. When we were on the rapids, the people on the boat were funny. We pretty much always had something to do when we were going places because there were so may people to talk to or play games together."

Colin (8) – "It was fun having other kids on the trip. Noah and I beat our Adventure Guide Drew at foosball and we gave each other high-fives. One lady was funny on the bus and she would make up jokes. She made me feel better when my mom and brothers made me angry."

Family dynamics—gotta love them, right? At least Colin had somewhere else to go when he reached his limit with his family.

Throughout the Adventures by Disney itineraries, Disney planners schedule kid-only interactions. On some trips, Adventure Guides take the children on a specific activity such as gelato tasting or visiting an animal sanctuary, while their parents join the adults in a wine-tasting tour. On our first night at the Brooks Lake Lodge, the Adventure Guides set up a special “kids’ table” in the dining room at Brooks Lake Lodge so that the adults could dine with each other and focus on adult conversations. The next night when we arrived for dinner, most of the children elected to dine together at the table again. 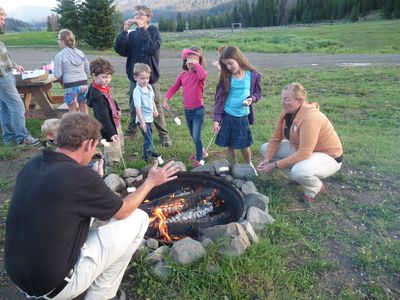 Everyone loves s’mores by a campfire. The Adventure Guides help the children make s’mores out by the fishing pond. Photo by Adrienne Krock.

After the planned adults-only dinner, the Adventure Guides hosted all the children in our group, from preschoolers to teens, with a movie night and craft activity. Despite their age range, all three of my children enjoyed the kid-only programs with the Adventure Guides.

Matthew (14) – "I liked getting to know our Adventure Guide Drew on the hike and playing “What’s the rule?” riddles. Drew and I showed each other card tricks, too. We fly-fished together at Brooks Lake Lodge. Tiffany played games, too. Tiffany and some of the adults listened to me playing the piano at the Lodge and said I played well."

Spencer (11) – "I liked playing Capture the Flag at Brooks Lake Lodge. I told our Adventure Guide Tiffany my idea for a strategy for Capture the Flag. She helped be a part of my idea."

Colin (8) – "Drew was fun when we went on the hike. I liked eating with Drew and Tiffany. We had fun at the kids’ table. I liked s’mores because they were yummy. I had fun at Capture the Flag because we won." 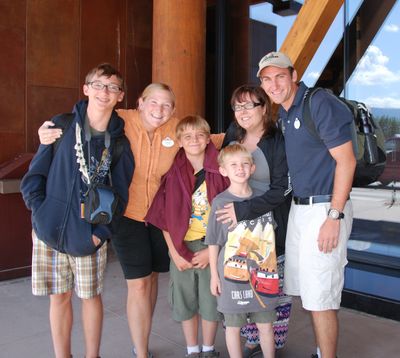 The Krock family stops for one last picture with their Adventure Guides at Jackson Hole airport before reluctantly saying good-bye. Photo by Adrienne Krock.

Without any of the normal travel hassles like dealing with reservations or scrambling to decide on where to eat, the Adventure Guides kept everyone occupied and stress-free, allowing us to enjoy not only the trip itself, but the company of everyone in our group. The group dynamic worked well for our family, with kids and parents spending time together but also able to take breaks from each other. The individual groups all came together to form one large, friendly ohana, enjoying each others’ company and helping each other out, with shared experiences and newfound bonds.

Colin said it best on the last day of our trip. As we packed our luggage for the last time, he looked at me and said, “I don’t want to leave this place!”