Indiana Jones Goes Under the Knife

The safety patrol that just finished adding boat-perimeter netting, dock bumpers, and a new tethering system to the Jungle Cruise is next turning its sights on the Indiana Jones Adventure (see "Jungle Cruise reopens with new safety modifications" from our Disneyland Update last week for more information). [Edited to add: the refurbishment is scheduled from September 4 to December 7.] 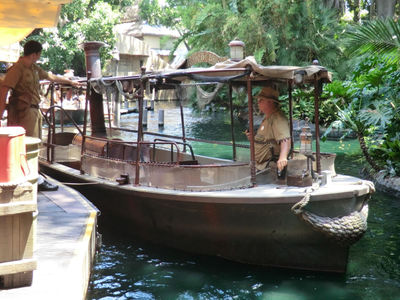 Disneyland has installed safety nets and a new tethering system to the Jungle Cruise boats. Photo by Adrienne Vincent-Phoenix.

Among the most noticeable changes will be widening the bridge in the “big room” to accommodate a new car maneuver. “They want to eliminate the chance that vehicles will put guests in precarious situations if they stop there," said one cast member. "The zone afterwards is a notorious spot where vehicles get ‘lost.’”

There will also be a significant number of Disneyland president George Kalogridis’ pet fall-protection enhancements. Ever since Disney was forced to rush Alice in Wonderland through an emergency rehab/disfigurement, Kalogridis has insisted on cutting OSHA off at the pass and incorporating better, more naturally themed protection devices on other attractions, such as the less-noticeable, rustic-looking railings along the Matterhorn track.

Indy will also receive plenty of show work and rehabs of the breakroom—a very welcome makeover considering how infrequently this attraction goes down.

Although other online sources cite Big Thunder Mountain as next in line, that coaster’s top-to-bottom safety update/rebuild is not scheduled to begin until January.

In the August 10 edition of “Resort Today Team Talk,” cast members learned that those who park at the Katella Cast Member Lot will again be forced to park off-property. According to the announcement, “As Annual Passholder block-outs begin to lift at the end of this historic summer, the Disneyland Resort will continue to be an exceptionally popular destination. To ensure the best experience possible for Guests, Katella Cast Member Lot (KCML) will be used for Guest parking on Monday, Aug. 20, and potentially on Sunday, Aug. 26.”

On August 20, cast members will be diverted to Angel Stadium; on August 26 to Honda Center.

The resort forced employees to park remotely twice earlier this summer and, although the parking blackouts were cancelled halfway through the day, cast members suspected that their employer would make the inconvenience more and more frequent.

The new announcement’s FAQs contain pretty much the same information as before, with one twist:

Q: Will we be getting meal vouchers again?

A: No. Meal vouchers were given to Cast Members on peak attendance days in June in appreciation of their hard work supporting the grand reopening of Disney California Adventure Park.

Just like a good politician, management passed out the perks to pacify those inconvenienced, but now that the inconveniences are to continue, they realized they had to slightly rewrite history.