Welcome back to Disney Stuff.

Hurricane Sandy has come and gone here in New York and for many of us things are slowly creeping back towards normalcy. These have been some trying times on Long Island for sure. Our area had power problems and giant trees down everywhere, but our distance from the ocean spared us the devastation that much of Long Island has experienced. With work, school, and life essentially screeching to a grinding halt over the past few weeks, it was the quality time with family and friends that made it bearable. Whether it was playing board games by candlelight during the power outage, or gathering at the lucky homes that had electricity to cook, we ate and drank and tried to laugh together—and did whatever we could to make the time pass.

Given the fact that school was closed for about two weeks, entertaining the 10-year-old twin boys certainly became a priority. After exhausting most of the toy closet and, for that matter, most other options, it was a relief to hear that the local movie theater had regained power and was thankfully showing Disney’s latest film Wreck-it Ralph. We couldn’t wait to get there and we thoroughly enjoyed it. For an old gamer like me, it was a throwback to the classic days of video games. For the boys, it was an introduction to the new Disney characters as well as an introduction to some of my old favorite game characters.

Our power came back on around the same time, and when we came back home the boys and I began poring through the old video games in the closets and cabinets. We worked our way up through the different systems and along the way found plenty of…you guessed it…Disney video games. One game in particular stood out as one of my all-time favorites from the original Sony PlayStation. Walt Disney World Quest Magical Racing Tour was released in 2000 and was available on the PlayStation and Sega Dreamcast consoles. There were also versions for the Nintendo Game Boy Color and PC. Crystal Dynamics and Disney Interactive developed the game and Eidos Interactive, best known for its Tomb Raider franchise, was the publisher. 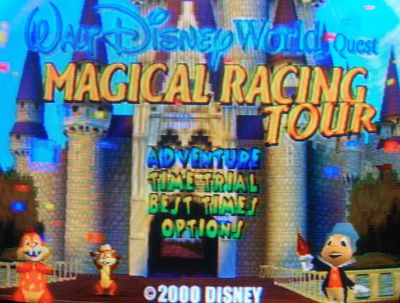 Cart racing games were pretty standard fare when this game was released. What sets this game apart are the different racetracks inspired by the four theme parks of Walt Disney World in Florida. The story goes that Chip and Dale have wrecked the Walt Disney World fireworks machine with some of their misplaced acorns. The pieces of the machine have been scattered throughout the resort and it’s your job to race through the parks and waterparks, find the pieces and save the day for all of the Disney guests. After all, what would a day at Disney be without fireworks? You have the option of playing as Chip or Dale in their Rescue Ranger outfits. Aside from Jiminy Cricket, who can be unlocked late in the game, the rest of the playable characters were created specifically for this game. But it’s not the characters that make this game. It’s the scenery and the setting that make this game a winner. 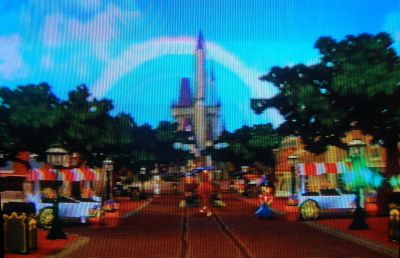 A view down Main Street U.S.A. Photo by Chris Barry.

For a Disney World fan, there's a visual treat around every corner. The title screen features none other than Jiminy Cricket welcoming you to Main Street U.S.A and Cinderella Castle with the Disney classic song "it’s a small world" playing in the background. Once the game begins you have your pick of places to visit and it’s a classic list of Disney attractions. At the Magic Kingdom, you get to race through Space Mountain, Splash Mountain, Big Thunder Mountain Railroad, Pirates of the Caribbean, Jungle Cruise, Tomorrowland Speedway, and Haunted Mansion. At Animal Kingdom you get to experience DINOSAUR. Test Track is the sole attraction from Epcot. Rock ‘n’Roller Coaster and an area curiously referred to as the Disney Studios represents what was then known as Disney-MGM Studios, although there is no mention of the park by that name. You also get to race through Typhoon Lagoon and Blizzard Beach. 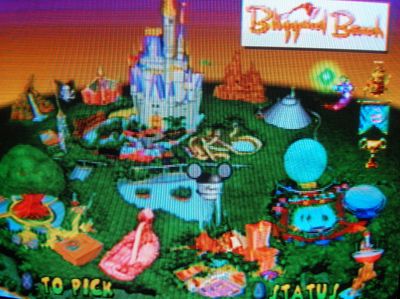 The map of parks and attractions that are available as race tracks. Photo by Chris Barry.

Within each attraction there are familiar sights and sounds. For instance, as you whiz by the famous hitchhiking ghosts in the Haunted Mansion, the attraction’s classic song "Grim Grinning Ghosts" plays. 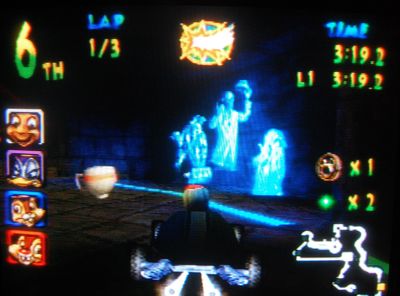 You cruise by the auctioneer and the redhead in Pirates of the Caribbean while listening to "Yo Ho (A Pirate’s Life for Me.)" 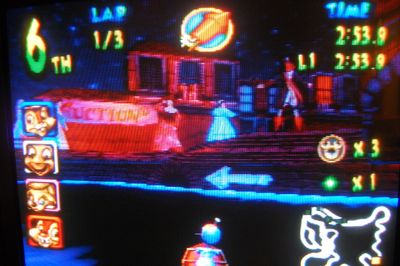 "We want the redhead!" Photo by Chris Barry.

"Zip-a-Dee-Doo-Dah" can be heard welcoming you to the Splash Mountain riverboat scene just like in the park. 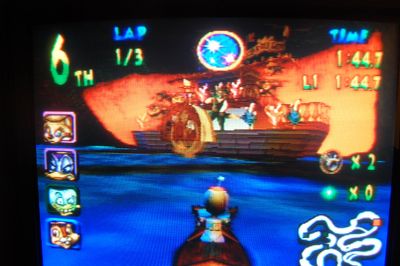 Back to the Briar Patch. Photo by Chris Barry.

Not every attraction has the correct song, but they all have the right visuals.

Here’s a famous moment from the Jungle Cruise. 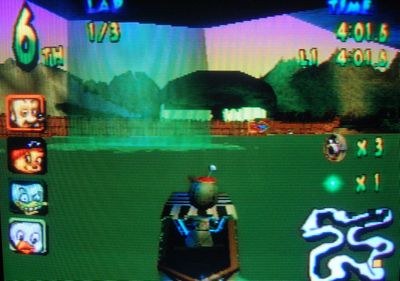 You can spot the Tower of Terror in the Disney Studios section. 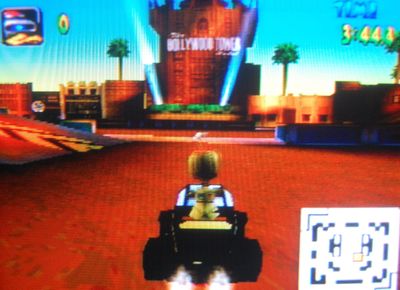 My favorite moment in the game is seeing the Contemporary Resort as you whip around the Tomorrowland Speedway. 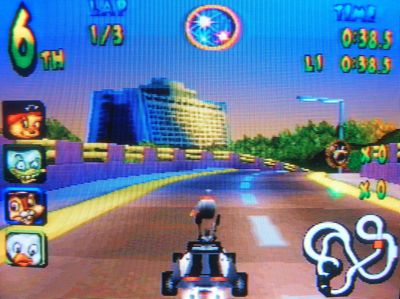 You can also see Space Mountain from the speedway. Photo by Chris Barry.

This game is a blast for gamers of all ages. Sure, the graphics are a bit dated by today’s standards, but it’s fast moving and fun. For the Disney fan it’s the park visuals and original music that are the real draw here. Some real Walt Disney World fans must have been in charge of making this game because the images, music and sound from the actual parks and attractions are a real treat.

There are lots of ways that we can remember the simple happy joys of our visits to the Disney parks. We look back at photo albums. We listen to the music. We visit sites like MousePlanet. Here’s yet another option, the Walt Disney World Quest Magical Racing Tour. If you own a PlayStation or Dreamcast dust it off and find this game on the secondary market out there. It’s definitely worth seeking out.

Do you own this classic Disney video game? It’s not so widely known. If you’ve never seen it before, what do you think? Click on the “Discuss this article on MousePad link below and let us hear your thoughts.