Disney's Hollywood Studios is foremost a theme park. But stripped down, it is also a museum—and of some considerable caliber. Most people don't see it as such, but there are a tremendous number of exhibits, artifacts, and priceless pieces to be found throughout the park. 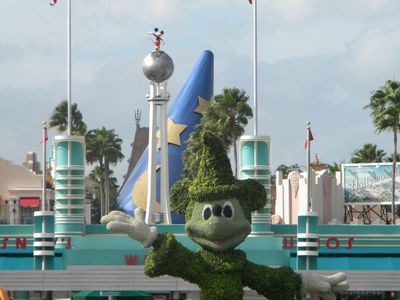 Lots to do at Disney's Hollywood Studios—including some amazing museum treasures. Photo by J. Jeff Kober.

There are many attractions that replicate exciting moments from the movies. But the gold idol in the Indiana Jones Stunt Spectacular, C-3P0 in the queue at Star Tours, and the dress Dorothy is wearing in the Great Movie Ride are replicas. Even the props that lie in dust on the shelves of the Hollywood Tower Hotel library are replicas—they are not the real things (there are two libraries anyway). Still, there are many things that are very much the real thing. And this article highlights those treasures. 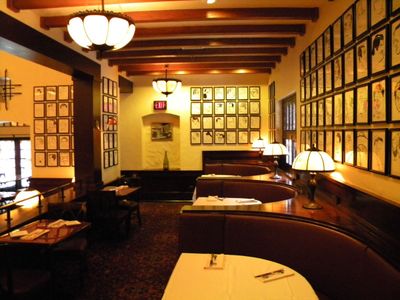 Viewer beware! This is a fascinating display of Hollywood caricatures, but after all is said and done they are simply prints and not the originals. Photo by J. Jeff Kober.

There are three major museums that are a part of the Studios. We'll cover each of them. And then we'll take a look at authentic pieces found throughout the Studios in places you might not consider. If you like the real Hollywood, you've found the place.

The Magic of Disney Animation

This is the first museum to be established. Most people have simply seen it as a corridor. Originally guests waited before entering the attraction. Now it's more of a post-show. I remember filming one night for the Disney Institute after hours. We had to have the curator on hand, and he spent most of the evening making sure that the alarms wouldn't sound. You probably don't think of a theme park needing a curator. But Disney hires them to take special care of the pieces and artifacts on display. 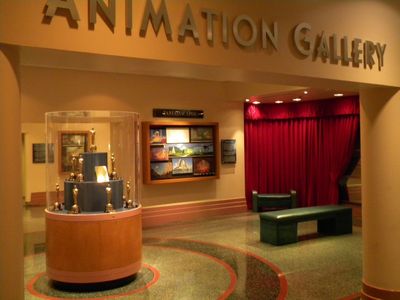 The statues in the center of this exhibit were removed recently for the filming of the new Tom Hanks movie, Saving Mr. Banks. Photo by J. Jeff Kober.

There have been many exhibits over the years focusing on various elements or themes such as character development or villains. 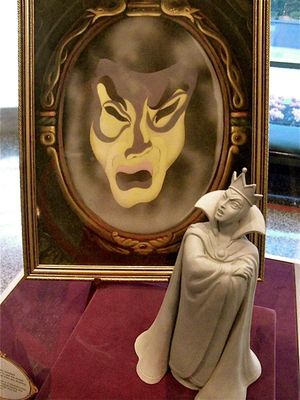 A previous exhibit honoring the art of Snow White and the Seven Dwarfs. Photo by J. Jeff Kober.

Currently, the display is a focus on animated backgrounds and layouts. 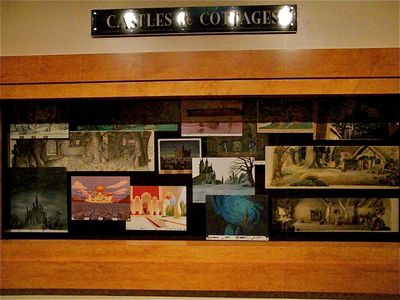 Many of these in the Castles & Cottages section of the exhibit appear to be originals, though with CGI, they would simply be prints. Photo by J. Jeff Kober.

It's easy to quickly rush through and on to your next attraction. But there is treasure if you stop and study this exhibit. No serious fan of Disney animation should pass it by. 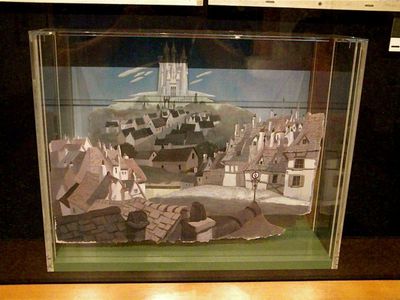 This is a great example of a background done on glass for Cinderella as seen through a multi-plane camera. Photo by J. Jeff Kober. 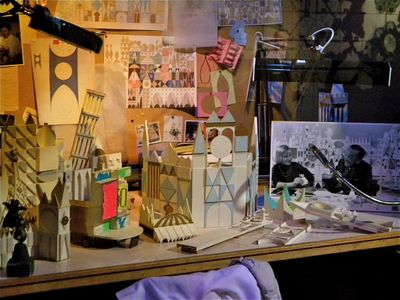 An Imagineer's desk holding various models and designs for "it's a small world". Photo by J. Jeff Kober

The exhibit is filled with treasures: Walt's desk as a child; a multiplane camera; a puppet-style, early Animatronic of Buddy Ebsen dancing; and former World's Fair and Epcot animatronics. 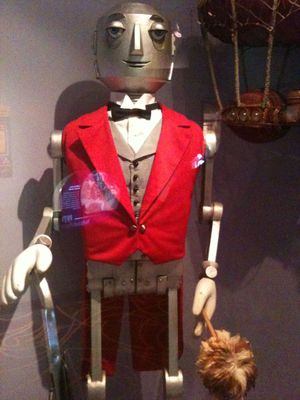 The original robot from Horizons at Epcot. Photo by J. Jeff Kober.

It's also home to some great models that have been done by Imagineering. One of the oldest is half of Disneyland's Main Street, U.S.A. The most recent of these has been the "New Fantasyland." You could spend a big chunk of time studying these works of imagination. 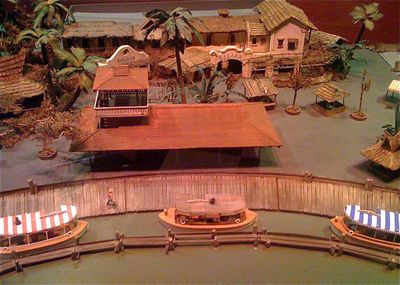 A model of Adventureland and the Jungle Cruise dock at Disneyland during the early years. Photo by J. Jeff Kober.

But the centerpiece is Walt's office. It has been carefully laid out just as he left it some 45 years ago. A map of Disneyland fills one wall. Reference materials are found throughout. I love a wind-up clock that is the same as one that we had in our living room growing up. Walt's office is not one of the biggest offices for Hollywood moguls during that era. But it was certainly one of the most creative. 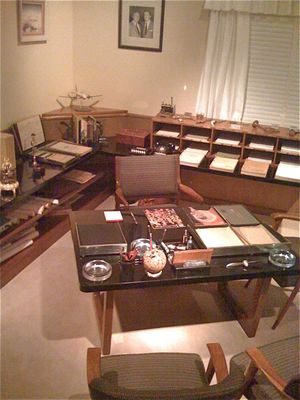 Walt's office just as it was when he passed away in 1966. Photo by J. Jeff Kober.

The climax of this exhibit is a wonderful film of Walt's life—a version of the original Walt Disney Story. You leave this attraction with a great appreciation for Walt Disney's hopes, sorrows, and accomplishments.

Most people don't know what the American Film Institute (AFI) Showcase is at Disney's Hollywood Studios. That's largely because you only see it if you go on the Backstage Magic tour. And even then most people step right through it on their way to the next attraction. But slow down, and you'll see some terrific gems. 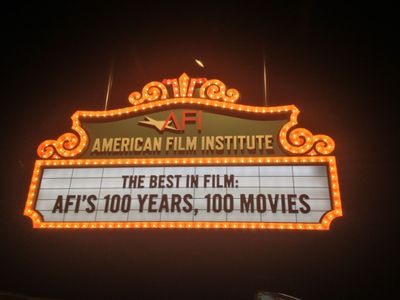 In the past, there were a number of Disney-related items in this exhibit, such as props from the Pirates of the Caribbean series. The last exhibit focused on villains. Recently, AFI created a new exhibit around the best in film over the last 100 years from the top 100 movies. What's different about this exhibit from those in the past—and the other two described earlier—is that there is hardly any Disney presence. 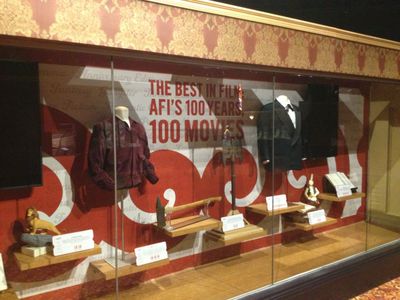 A case honoring a number of items from films like The Lion King and Dead Poets Society are the only Disney films referenced. Photo by J. Jeff Kober.

There are a number of costumes on display from films like The Godfather and Gone with the Wind. 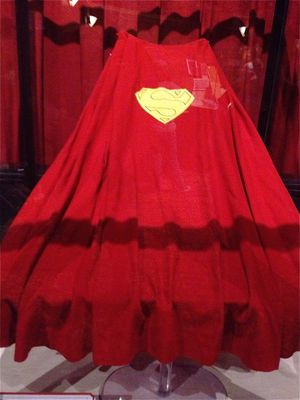 There are also lots of props large and small. 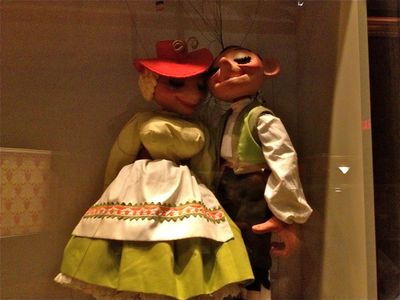 Puppets hand-crafted by Bill and Cora Baird for The Sound of Music. Photo by J. Jeff Kober. 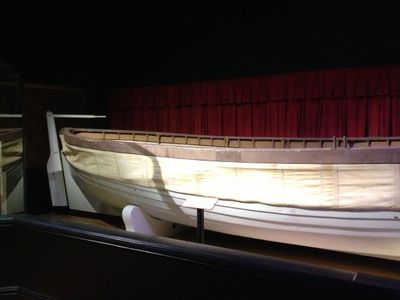 The largest of all props on display here is the rowboat from Titanic. Photo by J. Jeff Kober.

If you love movies, you will love this exhibit. You can easily spend a 30 minutes after your tour studying the treasures on display.

There are so many authentic pieces that the Backlot Tour itself should be considered a museum. Only the pieces found along the trail are larger than life. Start with the queue filled with pieces from Pearl Harbor and Pirates of the Caribbean. 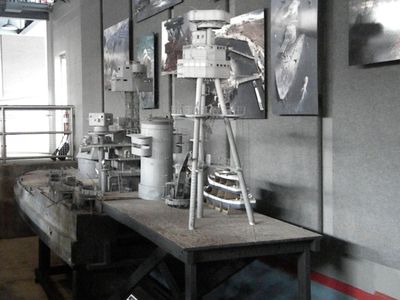 After the water special effects demonstration, there is another building you enter just before you line up for the trams themselves. There are more things housed in here than one can study. And it doesn't help that much of it is locked away. A lot of it is former props and Animatronics from the Studios and other parks like Epcot. For instance, you'll see many of the former characters from World of Motion. But there are also authentic film pieces from movies like The Black Hole and Dick Tracy, as well as TV shows of the past such as Home Improvement. 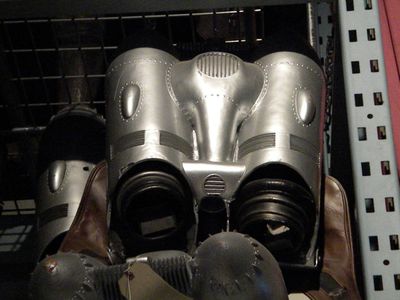 There are a whole lot of backpack jets from The Rocketeer on display here. It's hard to know if they were used in the film or for other purposes such as promotional events. Still, step outside and you'll see a dolphin that was part of the fountain used in the restaurant during the movie. Photo by J. Jeff Kober.

On the tram trail, other major props too large to house will be found. 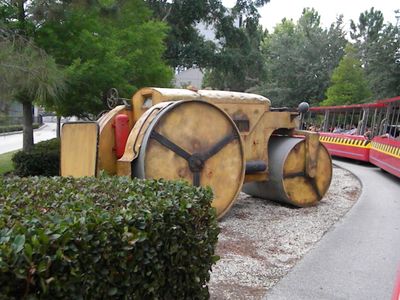 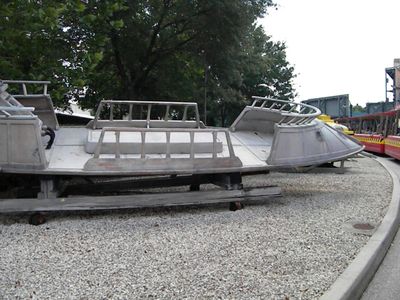 The ship used to fly over the Great Pit of Carkoon in Star Wars Episode VI: Return of the Jedi. Photo by J. Jeff Kober.

These are more obvious treasures. Others require a little more searching. Did you know that the Planet Hollywood shop on Sunset Boulevard holds some unique props from a number of films? Definitely the props and costumes in the queue at The Great Movie Ride are authentic. But most of the props and costumes on the ride are not. Still, there are exceptions. John Wayne's belt buckle was actually the one he favored wearing in the movies. 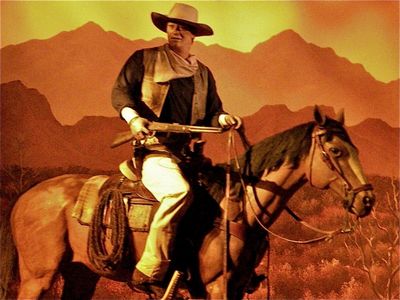 Difficult to see, but this small prop was important to the family when they loaned it to be worn at the Great Movie Ride. Photo by J. Jeff Kober.

Outside you get another authentic experience, but not directly from Hollywood. 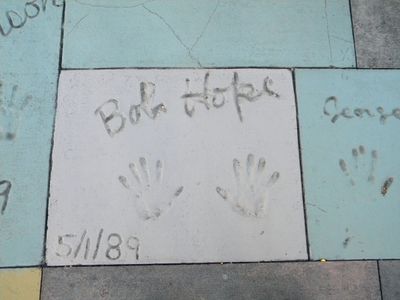 These prints don't come from the original Chinese Theater, but they really are Bob Hope's handprints. Photo by J. Jeff Kober.

Where most exhibits are only for the looking, Sid Cahuenga's offers the real thing—for sale! Most of them are autographed pictures of checks. But there are unique items, such as Bert's jacket worn by Dick Van Dyke in Mary Poppins. 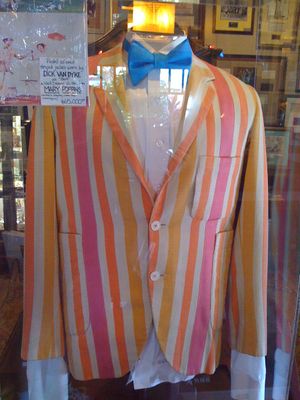