Welcome back to Disney Stuff.

Things certainly come and go in the Disney Parks. Sometimes just when you get accustomed to something being there… poof, it's gone—the Disney magicians have decided that it's time for a change and something you liked or enjoyed goes away. Despite how much you like this item, attraction, food, character or souvenir there are others who inevitably feel different. Maybe it's not as popular as you think. Maybe it's not selling and costing the company too much money without earning enough of a return. Will it ever come back again? Who knows? More than likely it won't. The Disney magicians make these decisions for a reason. Something that has been gone from the Walt Disney World parks for the past five years now is Pal Mickey. 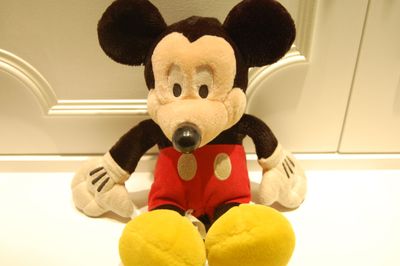 For five years—from 2003 through 2008—the parks and resorts of Walt Disney World sold a 10-½ inch plush Mickey doll with a very special feature. Before the days of apps and a flood of smartphones in the parks, there was this little bit of Disney interactivity. Pal Mickey was a toy, but he was so much more. This Mickey had a sensor built into that cute little black nose of his. When he came near an infrared transmitter somewhere in the parks, he would vibrate and chuckle. When you heard or felt Mickey chortling, you were supposed to squeeze his belly and he would relay some handy park information to you. In a way, it was a precursor to the My Disney Experience application available now for download to your smartphone. It was a way for the resort to push information to the guest, all in the guise of a plush toy.

Pal Mickey responded to over 400 different infrared transmitters located throughout the theme parks. He would provide interesting tidbits about attractions or specific areas of the parks. He would remind you how soon it was to the start of a parade or show. He would also tell you which of the Disney costumed characters could be found nearby. The sky was really the limit. As much as they wanted to record and store in the system was as much as Mickey could receive and clue you in on. The possibilities were endless. 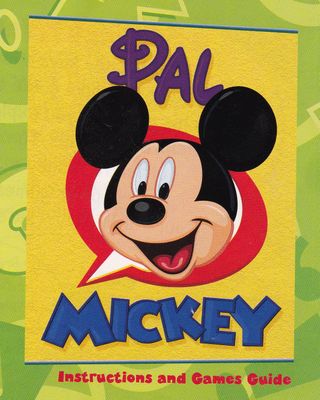 The original booklet that came with Pal Mickey. Photo by Chris Barry.

To make Pal Mickey even more appealing, he was loaded with over 700 different prerecorded sayings. When you were away from the parks, squeezing both of his hands simultaneously would switch him into game mode. You could follow his lead with "Mickey Says," a Simon Says type of game. There was "That Isn't Here," which is a game regarding places and things in the four theme parks. Finally, there was "Fast Friends," a game that also followed Mickey's lead and asked you to squeeze his hands or belly when you heard certain friend's names. Subsequent versions of Pal Mickey added three more games. If you weren't in the parks, or weren't in the mood to play games, Mickey would just tell corny jokes whenever you squeezed his belly.

The first Pal Mickey hit the parks in 2003 and was available to purchase for $50 in all four parks, the resorts, and at Downtown Disney. In the beginning, he was also available for rental. This is how we got the Pal Mickey that you see pictured in this article. Rental was around $8 for the day with a $50 deposit. If you didn't return him, the $50 was charged and you made a purchase. My daughter was 4 years old and had to have a Pal Mickey on her amazing first trip. We weren't so interested in coughing up $50 for a stuffed animal, but agreed to try him out through the rental program. Of course, returning Mickey was never even a consideration for Samantha after she spent that first day with him, so he quickly became ours. My guess is that this became the norm for many parents because the rental option was dropped after the first year. They raised Pal Mickey's price to $65 and he was exclusively for purchase.

We have the earliest version dressed in Mickey's classic red shorts, yellow shoes, and white gloves. A second version was released in 2005. To coincide with Disney land's 50th anniversary and the "Happiest Celebration on Earth" promotion, this version of Pal Mickey came in a tailcoat and bowtie and he had a golden medallion in his hand. The third and final version of Pal Mickey was sold with the mouse dressed in his famous sorcerer robe and hat from Fantasia.

Eventually, Mickey needed a change of clothes and in 2006 several outfits were sold in the parks as well. Here's Pal Mickey in his "Pin Trading" outfit, complete with pins on his vest and a pin book. 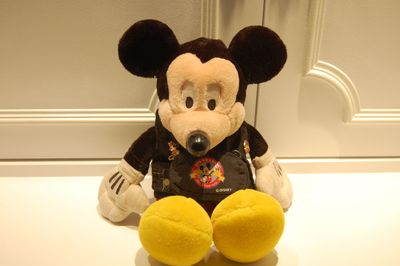 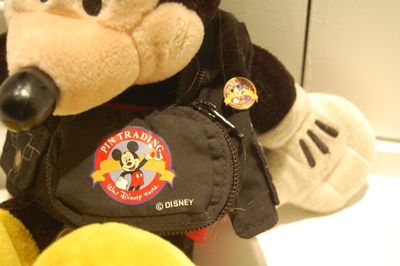 You can see the details of Mickey's pin bag and one of his jacket pins. Photo by Chris Barry. 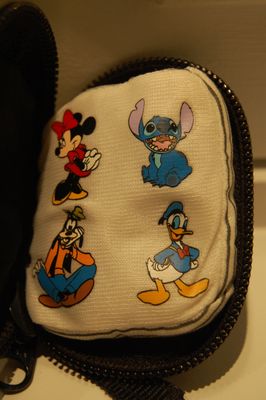 Inside Mickey's pin bag are some of his "pins." Photo by Chris Barry.

We also have the "Rain Wear" outfit for those frequent Florida thunderstorms. 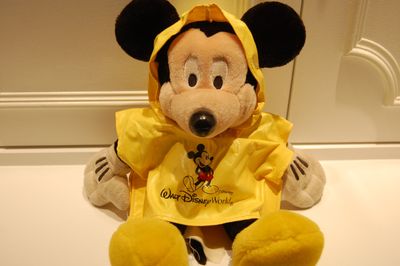 The "Safari" outfit and binoculars came in handy when we visited Disney's Animal Kingdom. 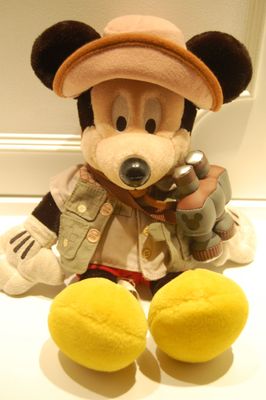 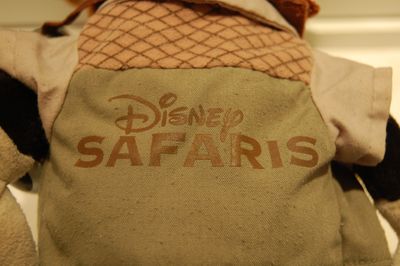 Take a look at the back of Safari Pal Mickey's jacket. Photo by Chris Barry.

Cashing in on the popularity of a certain Disney movie franchise, Mickey could wear his "Pirate Cap'n" outfit. 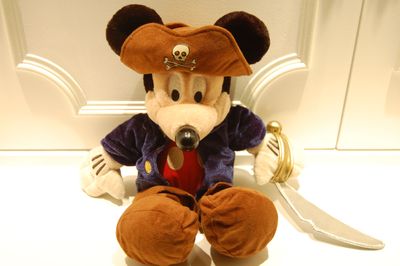 There was also a "Santa Mickey" outfit, which proved to be the most elusive to find, and finally a "Mickey Mouse Club" outfit that my daughter decided to just plain pass up. Each outfit was sold in the parks and resorts for $10.

Pal Mickey was, unfortunately, short-lived. Only five years into his existence, production of Pal Mickey was ceased in 2008. The transmitters would still operate, but once the remaining dolls were sold he was produced no more. If you're looking for a Pal Mickey, he is frequently for sale on eBay and can sometimes command quite a high price. I've seen him still in the original box for a $199 asking price. A more typical and reasonable price would be around $50.

The big question, of course, is, will Pal Mickey still work in the parks? Unfortunately, I don't have firsthand experience with this one. On our last trip this past summer it was just me and my boys. My daughter is the keeper of Pal Mickey, and without her on the trip he was sadly left at home. There are conflicting reports online as to whether or not he is still a functioning mouse. I've seen a report as recent as the fall saying that Pal Mickey gave their owner a "Welcome to Epcot" greeting upon entering the Epcot turnstiles. However, the same report said that he was silent as they walked through the rest of the park. I've seen other reports that the transmitters are still functioning and as long as your Pal is in good working order, he should still receive messages.

At any rate, Pal Mickey is a nice piece of Disney park history. It was very technologically cool for the time. Nowadays with the official Disney park app, or the multitudes of others out there, you can certainly get your info quicker and more accurately. But remember this… you can't hug an app or a smartphone. Well… I guess you could, but you might get some strange looks.

With that said, keep the batteries fresh and keep him dry, and you and your kids can have a Pal Mickey to play games, tell jokes or just to be a pal for a long, long time.

What did you or do you think of Pal Mickey? Does anybody have a recent confirmation of their Pal mickey working or not working in the Walt Disney World parks? Click on the link below and let me hear your thoughts.