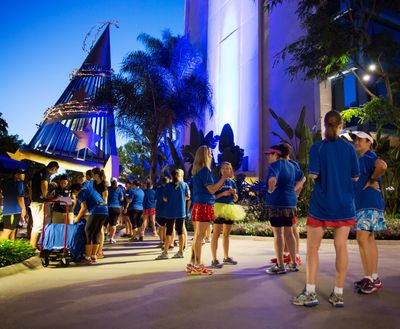 Participants wait at dawn for the start of the Disneyland Half Meetup. Photo by Jimmy DeFlippo, © Disney.

With the sun barely out, the meetup started with a greetng from Bob Hitchcock and Tony Morreale from Disney Sports, who thanked everyone for attending. Tony then introduced Lauren Noble and Kiko Magana from New Balance.

Lauren and Kiko introduced attendees to Good Form Running, a program by shoemaker New Balance that teaches people how to run with better form. As Lauren described each key component, Kiko gave examples and encouraged attendees to follow his lead. 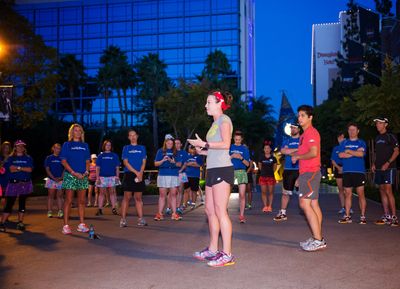 According to Lauren and Kiko, the four steps of good form running are: 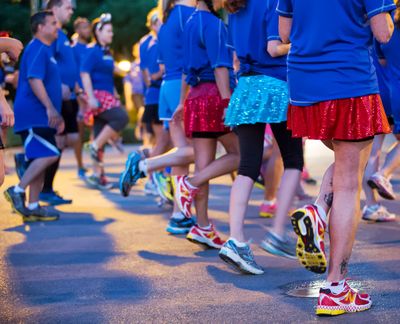 After the New Balance team gave their presentation, a white furry blur suddenly appeared in the crowd. The blur turned out to be the White Rabbit from Alice in Wonderland. Keeping in character the White Rabbit rushed around (because he's late, right?). He didn't really stick around long enough for a meet-and-greet; instead, he used his arms to indicate that he was urging people to get going... which meant it was finally time to start running! 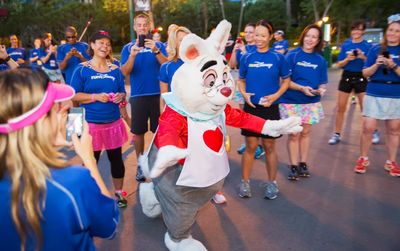 The White Rabbit makes an appearance at the start of the runDisney meetup. Photo by Jimmy DeFlippo, © Disney.

The meetup participants were given an option to run with either the continuous-running group, led by 2012 Disneyland Half Marathon female winner Cindy Lynch, or with the run/walk interval group, led by Olympian and runDisney running coach Jeff Galloway. 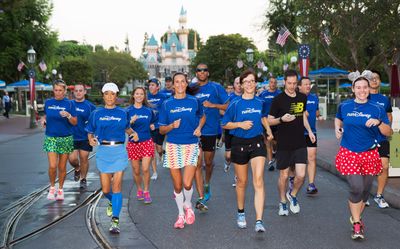 The runDisney meetup participants split into two groups for their run through the parks. The first group to take off is led by 2012 Disneyland Half Marathon female winner Cindy Lynch (center, in ponytail, pink running shoes, and white running skirt with multi-colors), who keeps up a brisk 10:30-minute pace. [The author went running in this group in her light blue skort and white Team MousePlanet cap.] Photo by Jimmy DeFlippo, © Disney. 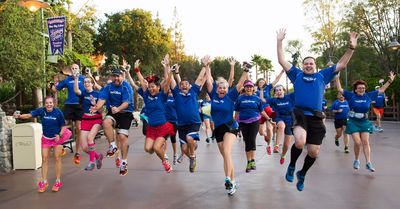 With the attendees split into two groups, Cindy's group took off first, heading out from the Disneyland Hotel and into Downtown Disney. Runners then headed through the Esplanade into Disneyland, down a completely empty Main Street. After getting to run right up Main Street and through Sleeping Beauty Castle, the runners got to Fantasyland, where it was time for a quick break for a special visit from Alice. Do we see a theme here, between Alice and the White Rabbit? We do, because they are the characters associated with the inaugural Disneyland 10K. 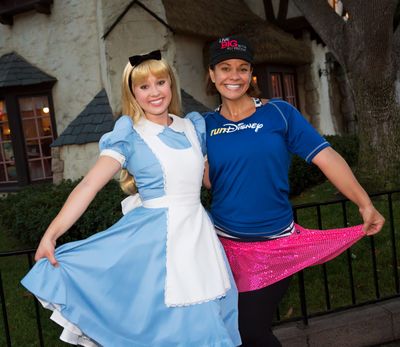 Two "Ali" gals Alice and Ali Vincent are all smiles during the runDisney meetup. Photo by Jimmy DeFlippo, © Disney.

Everyone got a chance to enjoy a meet-and-greet with Alice, and those who were waiting were encouraged to ride the Mad Tea Party teacups. While having zero wait time for the tea cups was very exciting, some of the participants wondered out loud whether spinning in a teacup right after going jogging was such a good idea. 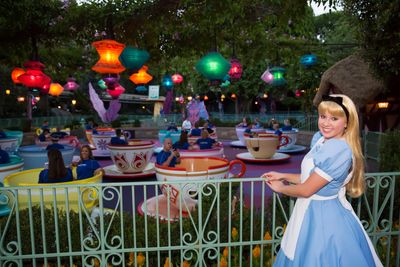 Alice makes an appearance in front of the Mad Tea Party teacup ride in Disneyland's Fantasyland during the runDisney meetup. Photo by Jimmy DeFlippo, © Disney. 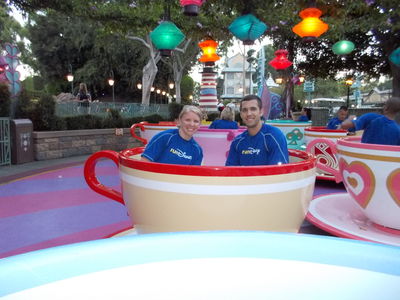 Two runDisney meetup participants enjoy a spin on the Mad Tea Party during a run through the park. Photo by Lani Teshima.

After everyone had a chance to ride the tea cups and visit with Alice, it was time to start running again. This time, the runners headed to Disney California Adventure park. Once in DCA, the runners got to run past Buena Vista Street and through Cars Land 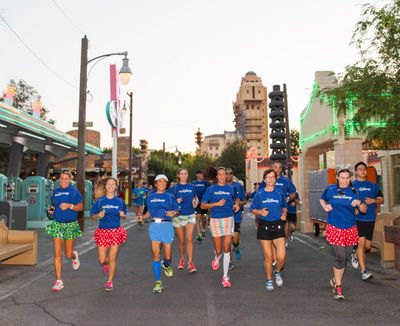 The continuous running group, led by Cindy Lynch, enjoys a run through a very empty Cars Land during the Disneyland Half Meetup. Photo by Jimmy DeFlippo, © Disney.

The run finally ended at the back of Hollywood Pictures Backlot, where they had set up some refreshments for the attendees. In addition to such healthy options as yogurt and fresh fruit, there was a large coffee pot for people seeking caffeine. 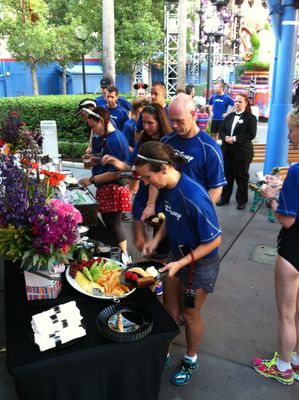 Disneyland Half Meetup participants treat themselves to a light breakfast after the run around the parks. Photo by Lani Teshima.

Once everyone had a chance to grab some food and relax, it was time for some presentations.

Jen Roth from ABC-TV talked about a new TV series, Once Upon a Time in Wonderland, a spin-off from ABC-TV's Once Upon a Time series. The new show revolves around a contemporary Alice, who falls in love with the Genie (from Aladdin). Jen explained that the merging of these two worlds makes this new show very interesting. 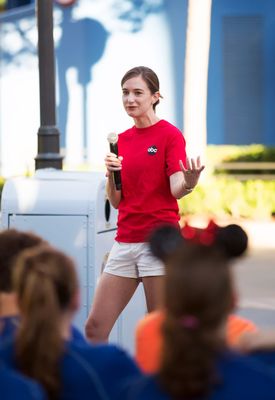 Jen Roth from ABC-TV discusses the new TV series, "Once Upon a Time in Wonderland," which extends the world of "Once Upon a Time" with the introduction of Alice and the Genie from Aladdin. Photo by Jimmy DeFlippo, © Disney.

After this introduction, participants were treated to a long trailer for the show.

Next to speak was Cindy Lynch, who talked about how she became keenly interested in racing in a runDisney event when she found out that winners get a Golden Mickey. She was sad to learn that the 2012 winners got plaques, and encouraged the runDisney staff at the meetup to consider bringing back the Golden Mickeys. 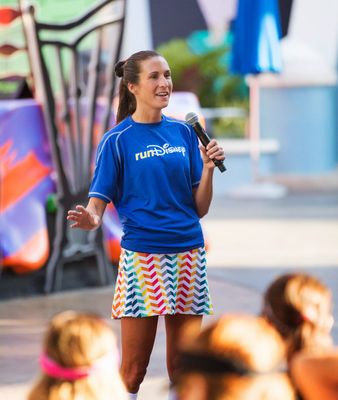 2013 Disneyland Half Marathon female winner Cindy Lynch answers questions from the runDisney meetup participants about some of her training. Photo by Jimmy DeFlippo, © Disney.

Cindy answered a number of questions from the meetup participants, including her fuel of choice ("Gu Roctane"), and what she thought about the race course (she said she thought the first three miles of the course, through the parks, were surreal).

Participants next got to listen to runDisney's official nutritionist, Tara Gidus, also known as DietDivaTara. Tara offered a number of tips for running and nutrition. For example, she said it was possible to carb load without resorting to eating a whole loaf of bread and 14 pounds of pasta right before a race. 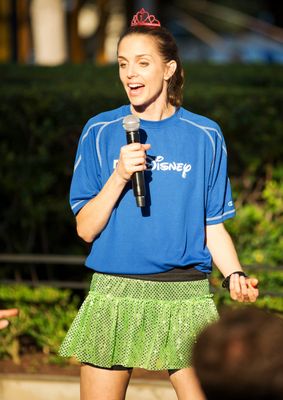 After Tara spoke, participants had a chance to listen to two-time Olympian and official runDisney coach Jeff Galloway. 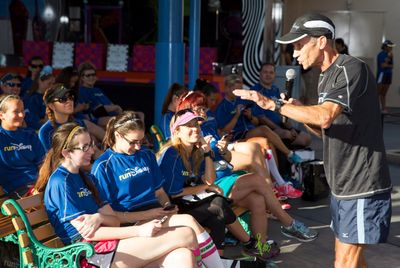 Two-time Olympian and official runDisney running coach Jeff Galloway talks about how he used to run 140 miles a week at his peak (he doesn't run that much anymore). Photo by Jimmy DeFlippo, © Disney.

When someone asked Jeff how many miles per week he was running during the height of his competitive career, he said he ran 140 miles a week. "I don't recommend that, though," he added.

Next to speak with Ali Vincent, the first female winner of The Biggest Loser and current host of Living Big with Ali Vincent (on the Disney/ABC-owned Live Well Network).

Ali talked about motivation, and how she uses the big moments in her life (such as winning The Biggest Loser) to draw strength from and to help motivate her. 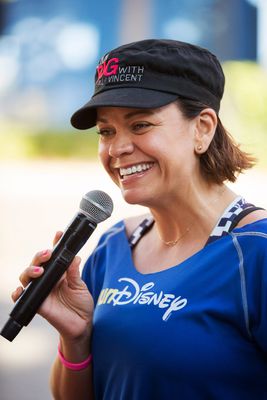 Ali Vincent, the first female winner of "The Biggest Loser" and host of "Living Big with Ali Vincent" on the ABC-owned Live Well Network, talks about the big moments in her life and how they help provide motivation in the day to day. Photo by Jimmy DeFlippo, © Disney.

"The day to day is when I'm most proud—to find the strength," she said. She also encouraged people not to pick on themselves. For example, instead of getting down on yourself for hitting the snooze button on the alarm clock repeatedly, she suggested taking a positive view: "I got up on the third snooze—yay!" (instead of waiting for the fourth or fifth snooze).

Ali also talked about how races keep her motivated, and reminded participants that they were setting a positive example for everyone else in their lives. "Anyone who has the desire can cross the finish line," she said.

Actor Sean Astin was next to speak, and talked about how proud he was that he was able to go running with one of his daughters. He noted that as they started talking about her grandmother, his daughter forgot about the difficulty of running, and began to run faster as she was filled with inspiration. 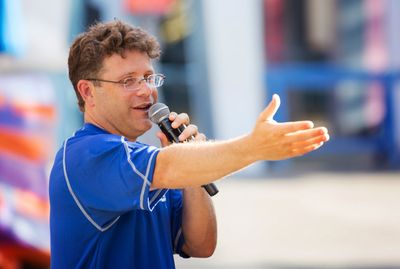 Actor Sean Astin talks about what inspires him. Photo by Jimmy DeFlippo, © Disney.

The last celebrity to speak was 'NSYNC member and host of My Family Recipe Rocks (Live Well Network), Joey Fatone. Joey talked about how he found himself volunteering to run the Goofy Challenge at Walt Disney World this past January after his wife, a veteran Goofy runner herself, had broken her foot and had to pull out from the challenge. 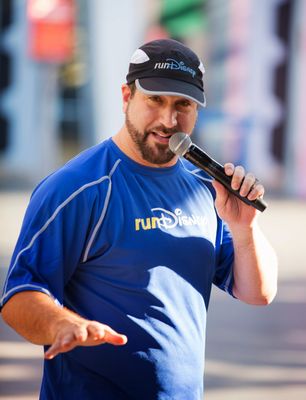 Joey credited Jeff Galloway and his run/walk method for helping him to successfully complete his Goofy Challenge. 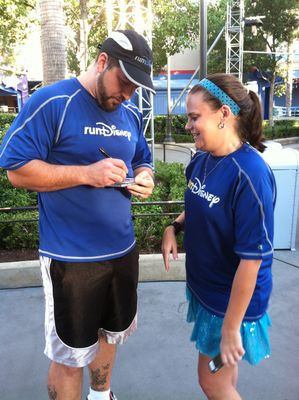 During the meetup, Joey Fatone takes a moment to autograph an 'NSYNC CD case for Brandi Gilbert. Brandi brought the CD with her to the meetup because 'NSYNC was her first boy band crush, from when she was 14 years old. Photo by Lani Teshima.

After the speakers were done, the runDisney staff took a few questions from the audience, such as whether there might be more runDisney events in the plans. Without giving any actual details, they said there are "four weekend activities being planned" for the next two years. Those in the audience tried to get more details. Could these be in Paris? Tokyo? For now, mum's the word. 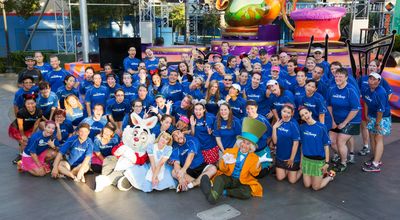 After the Q-and-A, the runDisney staff drew back the curtains to reveal the new medals for upcoming runDisney events. 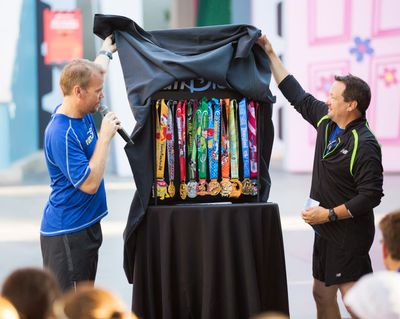 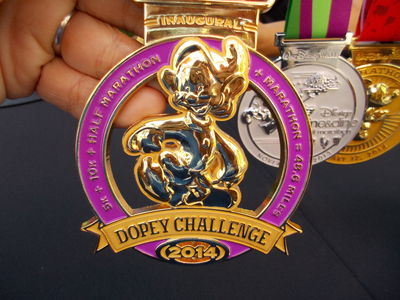 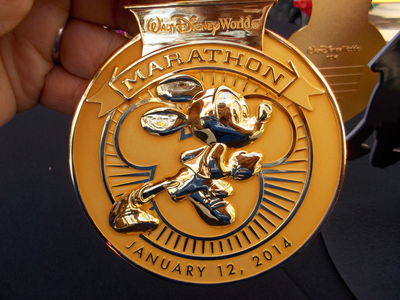 The Mickey medal is not as elaborate as the one given for the 20th anniversary earlier this year, but the 2014 version looks more like a part of a series. Photo by Lani Teshima. 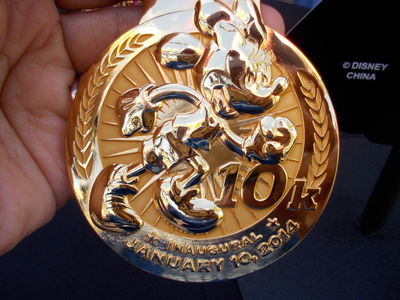 The brand new Minnie medal for the WDW Marathon Weekend 10K event is slightly smaller in size from the Mickey medal.Photo by Lani Teshima. 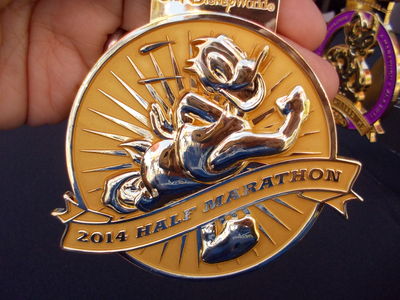 The Donald medal resembles the Mickey and Minnie medals, and does away with the various oddly shaped medals the Donald was known for in the past. Photo by Lani Teshima. 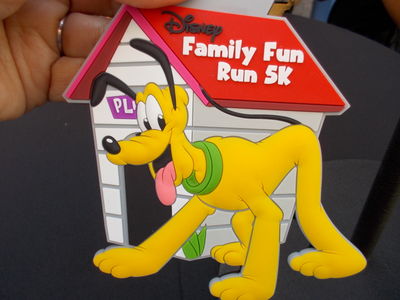 The mascot for the 2014 5K Family Fun Run is Pluto. Photo by Lani Teshima. 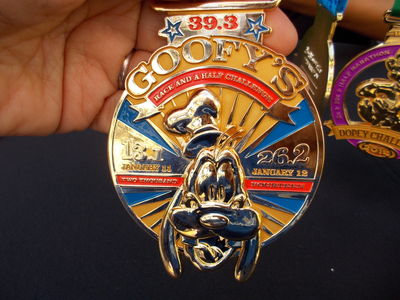 The Goofy medal gets a brand new look, with a lot of color. Photo by Lani Teshima. 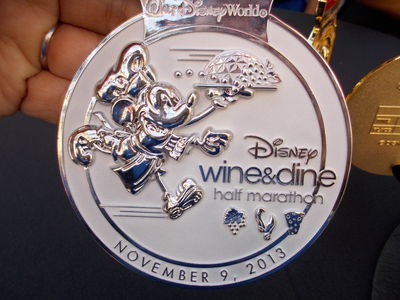 The 2013 Wine and Dine medal does away with the round Spaceship Earth motif. Photo by Lani Teshima. 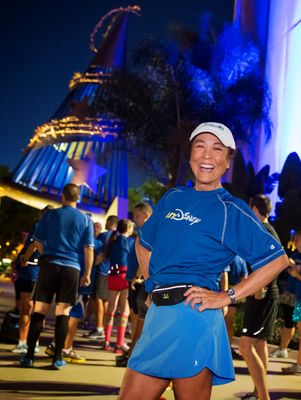 The author at the runDisney meetup. Photo by Jimmy DeFlippo, © Disney.