The First (and only) Disneyland Marathon

In January 1994, Walt Disney World hosted its first full marathon. Covering 26.2 miles of the then-three WDW parks, the marathon boasted close to 7,000 runners and started the trend of Disney park destination running. To this day, the WDW Marathon remains one of the most successful Disney-hosted distance events.

But did you know that Disneyland hosted its own marathon as well? Just over one year later, on March 26, 1995, Disneyland hosted the inaugural Disneyland Marathon and accompanying 5K in celebration of the park's 40th anniversary. It would be over 10 years until Disneyland would attempt another distance run in the park.

On November 17, 1994, Disneyland officials held a press conference to announce the inaugural Disneyland Marathon and 5K to be held March 26, 1995. While local Orange County business leaders applauded the announcement, as this would bring the marathon (and marathon dollars) back to the county that had last hosted a 26.2 mile event in 1991, the new marathon was less than well-received by the competing L.A. Marathon, which was scheduled to happen three weeks before the Disneyland date. Generally, marathon runners only run one or two marathons in a single year (and rarely so close together) and the race organizers for the Los Angeles race feared the new Disneyland Marathon would syphon off participants from their event. Questions also arose at the $55 registration fee, which was expensive at the time (especially compared to $35 for the L.A. Marathon) and $20 for the 5K as well as a lack of appearance money for national and world-class runners.

In order to smooth ruffled feathers between the proposed Disneyland Marathon and the more-established L.A. Marathon, a cooperative agreement was made between event officials to put more emphasis on the Disneyland 5K event (which boasted a $31,000 purse) than the Disneyland Marathon which would have a $19,000 purse. The L.A. Marathon would offer $500,000 in appearance and prize money with world-class runners such as Arturo Barrios scheduled to attend. The Disneyland 5K would feature Matt Guistu, the 1994 U.S. 5,000-meter champion and Annette Peters, the U.S. women's 5,000-meter record holder. It was either the start of a beautiful friendship between the two events or would end up a "one and done" with only one race left standing.

After months of preparation, the marathon weekend was kicked off with a two-day expo held on Friday, March 24 and Saturday, March 25 at the Disneyland Hotel, a tradition that continues to this day. While Sunday race-day registration was not available, registration for both the marathon and 5K was still open at the expo. Both events were capped at 5,000 participants, although the final numbers were "balanced" a bit; the Disneyland Marathon ultimately hosted 2,200 runners, while the Disneyland 5K hosted close to 5,800 runners and walkers. 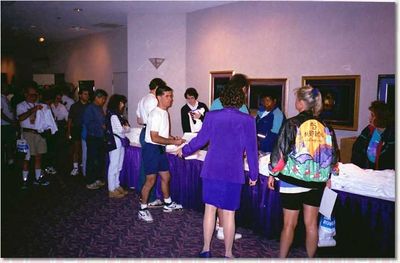 Registration was available at the race expo. Photo by Don Gworek/Disney Deads Photos.

At 7:00 a.m. Sunday morning, the marathon started under blue skies and light winds, with the 5K starting close after at 7:15 a.m. As with all Disney running events, Mickey, Goofy, and Donald were on hand to send off the participants. Both events began and finished in Disneyland, which amazingly still opened for park guests as scheduled that morning at 8:30. The 5K route took one loop around the park and surrounding Anaheim streets before finishing back in the park at the end of Main Street. The marathon course featured two loops around Disneyland, with runners then moving out into Anaheim and passing by Arrowhead Pond (now known as Honda Center) and through Anaheim Stadium (now called Angel Stadium) before finishing back in Disneyland. Both routes also included the now iconic run through Sleeping Beauty Castle. 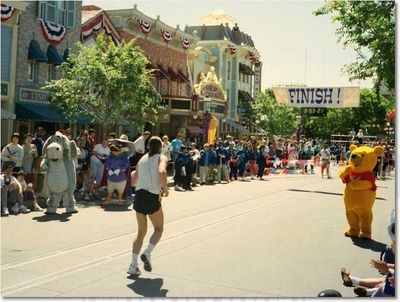 Disneyland Marathon participants, who came from as far away as Zimbabwe and Japan, were required to finish the race in five hours, which equates to a 12-minute per mile pace. At that time, no other major marathon had a similar rule; not even the mighty Boston Marathon had such a short timing cutoff. The 5K course was open for an hour (a 19-minute per mile pace) which is considerably longer than today's 16-minute per mile pace maximum; any participant not finishing the 5K in an hour was required to move off the course to make way for incoming marathoners. All finishers were escorted out of the park after crossing the finish line and were required to purchase park entrance if they wished to visit Disneyland that day. Interesting how some things never change.

As with any inaugural running event, the Disneyland Marathon did not go 100 percent according to plan. Between miles 1 and 2, the entire pack of runners, following apparently confused bicycle escorts, took a left turn instead of right, which cut nearly a half a mile off the course. Marathon runners, many unaware of the "shortcut" they had taken, were baffled for the remainder of the race, as every mile marker following mile 1 was now off.

Given that the Disneyland Marathon was a Boston Marathon and Olympic Trials qualifying event, it was imperative to quickly address the issue and recertify the course prior to the first finisher crossing the tape so as not to cause issues with potential qualifications. Race organizers were able to use a calibrated bicycle to measure the "shortcut" and in the nick of time, tack the appropriate mileage on after the 25-mile mark. In fact, according to Race Director Doug Thurston in a 1999 Runner's World magazine article, the course changes were made in such real-time that "the lead runners were bearing down on us" as the course cones were being moved. The course blooper is so infamous that it was awarded two "awards" in the 1999 "Running's Greatest Bloopers" article in Runner's World magazine: "The Best Adventure in Race Certification Blooper by the Amelia Earheart Society" to the race, and to Doug Thurston went "The Best Sense of Humor in the Aftermath of Disaster Award." 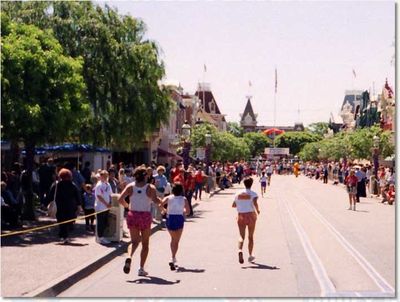 The eventual 1995 Disneyland Marathon men's winner, Eddy Hellebuyck of Albuquerque, New Mexico, said his plan was to stay at the front of the pack no matter where they went and then have a kick at the finish. He finished in 2:19:46, beating Japan's Toshinobu Sato by four seconds. The women's winner, Kathy Smith of Aliso Viejo, California, finished in 2:44:51.

All participants in both events were awarded a special Disneyland race T-shirt and a water bottle. Marathon finishers received a gold-plated Mickey Mouse icon medal similar to the ones awarded in WDW. Winners of each event also received a Mickey Mouse trophy and were honored guests in the afternoon parade. 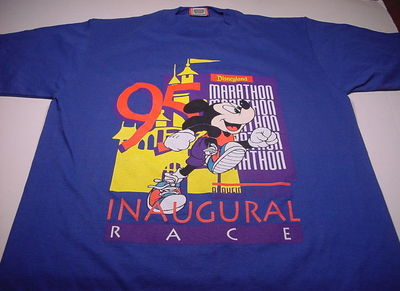 While race officials announced that the 1995 Disneyland Marathon and 5K would be the first in a series of events, there was no actually guarantee that the marathon distance would continue at Disneyland. In fact, as part of the cooperative agreement with the L.A. Marathon, Disney officials agreed that Disneyland would host 5K, 10k, and half-marathon events in 1996, but going forward marathon runners would be bused to Los Angeles to run in that event, thus creating at the time what they hoped to be the biggest running weekend in the world. That weekend never materialized. While the L.A. Marathon is still held each March, the 1995 Disneyland Marathon was the last full marathon Disneyland would host. It would be years until Disneyland would hold another distance running event. 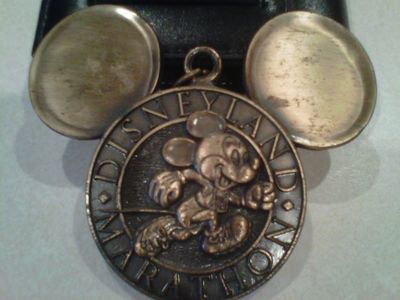 In fact, distance running would not return to Disneyland until September 2006 when the inaugural Disneyland Half Marathon and 5K were held during the last month of the Happiest Homecoming on Earth, Disneyland's 50th anniversary celebration. The 10K distance was added in 2013 with the introduction of the Dumbo Double Dare Challenge (completing both the half-marathon and 10K in the same weekend). The park is now home to the Disneyland Half Marathon and 5K every Labor Day weekend, as well as the Tinker Bell Half Marathon. The inaugural Avenger's Half Marathon occurs this November, and the inaugural Star Wars Half Marathon Weekend in January rounds out races throughout the year. While it is unlikely that the marathon will return to Disneyland because of the extensive Anaheim road closures it would require, there are more than enough distance events in Disneyland to keep runners and walkers coming back each year to the Happiest Place on Earth.