Monstrous Summer kicks off this Friday at the Disneyland Resort | “Jump, Jive, Boogie Swing Party” returning to Disneyland select nights in June | D23 announces free memberships and a redesigned website | This and that...

Monstrous Summer kicks off this Friday at the Disneyland Resort

As we reported two weeks ago, the 24-hour operation of Disney California Adventure park is a mix-in with a Grad Nite celebration. This mix-in includes the closure of some of the most popular areas of California Adventure park to regular guests; Grad Nite students not only have exclusive access to Cars Land, Paradise Pier, and the Twilight Zone Tower of Terror starting at 11:00 p.m. Friday night, but Disney has also confirmed that Radiator Springs Racers will remain closed once Grad Nite ends at 3:00 a.m.

Disney posted the following disclaimer on its website Friday,

“While some “Monstrous Summer” activities will continue to take place at Disney California Adventure Park, portions of this theme park will be closed, including Cars Land, Paradise Pier and The Twilight Zone Tower of Terror™, from 11:00 PM to 3:00 AM for a Grad Nite special event. Additionally, Radiator Springs Racers will remain closed for the remainder of the night after 3:00 a.m. Other attractions may also close early due to maintenance or other reasons. Please check the Entertainment Times Guide on the day of the event for a more complete listing of scheduled closures.”

This means, the last opportunity for guests attending the 24-hour all-nighter to ride the most popular attraction at the Disneyland Resort is 11:00 p.m. on Friday, May 24.

Disney also has plenty of entertainment, food and special merchandise lined up for the all-nighter.

Some Downtown Disney resta:urants and stores are offering extended hours during the all-nighter. All restaurants remain open until 2:00 a.m. (ESPN Zone and Ralph Brennan's Jazz Kitchen Quick Service close at 3:00 a.m.), The House of Blues and Tortilla Jo's will re-open on May 25, at 6:00 a.m. to serve breakfast. Café Rene, Planet Popcorn, Wetzel's Pretzels, Jamba Juice and La Brea Bakery Express will remain open the full 24 hours. And there will be live entertainment through 4:00 a.m. on May 25 in various locations throughout Downtown Disney.

Resort parking may prove to be a challenge, and was definitely a major factor during the similar February 2012 "One More Disney Day" promotion. We are advising guests who plan to visit the Disneyland Resort this weekend to consider a few driving and parking tips.

Also this weekend, the Disneyland Resort premieres a new stage show and holds a Greek food and entertainment celebration:

As we reported in last week's park update, "Opa! A Celebration of Greece," a Greek music, food and entertainment event, takes place in various locations at both Disneyland and Disney California Adventure park Saturday, May 25 through Monday, May 27..

Memorial Day weekend will definitely be a busy one for the Disneyland Resort.

In an announcement made so quietly you probably missed it, Disneyland confirmed that starting June 15, the "Jump, Jive, Boogie Swing Party" is returning to the former Carnation Plaza Gardens stage on select nights. The popular Saturday evening swing dance was moved out to Downtown Disney in April for the construction of Fantasy Faire. The stage and dance floor, now known as The Royal Theatre, once again plays host to big bands and dancers.

Disney had maintained the "Jump, Jive, Boogie Swing Party" would return to Disneyland park following the completion and opening of Fantasy Faire, only to officially say its return was being "looked into" when asked about it during the grand opening media event. This left some fans feeling as if they had been lied to and that there was really no intention of returning the decades old tradition to Disneyland park. However, this past week, the Disney Parks Blog quietly posted the following:

“…beginning June 15 the “Jump, Jive, Boogie Swing Party” will return to the Royal Theatre for select nights during the summer”.

The new D23.com also features new "departments" and sections as well. Weird Disney will look at the more unusual pieces of Disney's past. Characters will profile the most beloved characters from television, film and comics with concept art and biographies. The Quotable Walt Disney will contain a digitized version of the out-of-print book featuring Walt quotes. Ask a Legend will be a video feature where Disney Legends such as Marty Sklar will answer fan questions. First Look will give members a look at new, upcoming releases. And the current video series Armchair Archivist and Disney Geek will return with new episodes.

In addition to the new and redesigned website, D23 also announced a free membership level which will include access to the members only content on D23.com, exclusive merchandise access, a subscription to the weekly D23 FanFaire e-newsletter and discounted tickets to the 2013 D23 Expo at the Anaheim Convention Center. The free membership is in addition to the existing gold and silver levels.

…The Disney Parks Blog is holding a "Mickey and the Magical Map" meet-up on May 31. The announcement was made Friday on the parks blog. Disney updated its blog within hours to say the event had filled and all confirmation emails had been sent out.

… It has been a few months since we took a look around the Disneyland Resort in photographs, and there are various projects, closures and openings taking place. 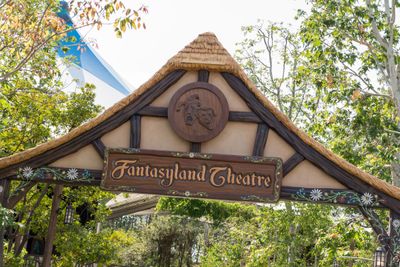 The new Fantasyland Theatre sign has been installed near the entrance to the refurbished stage show venue. Photo by Bryan Pugh. 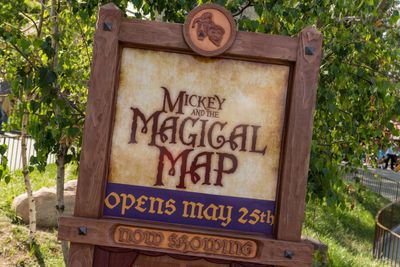 A "Mickey and the Magical Map" sign and show times board has been installed near the entrance to the Fantasyland Theatre. Photo by Bryan Pugh. 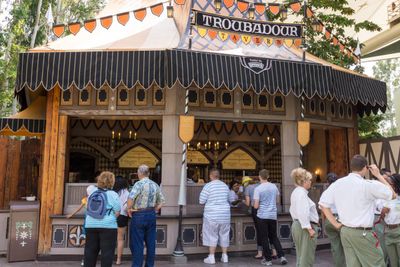 Troubadour Tavern, the quick service food location near the entrance to the Fantasyland Theatre, has reopened. Photo by Bryan Pugh. 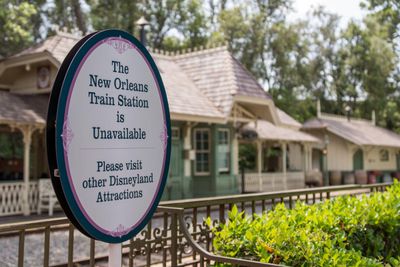 The Frontierland Train Station remains closed for a refurbishment. Photo by Bryan Pugh. 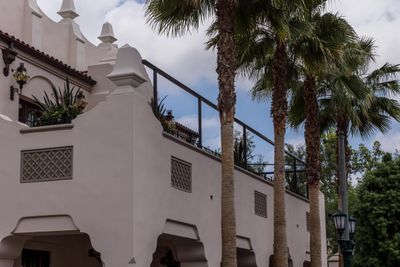 New, permanent awnings are being installed on the outdoor patio portions of the Carthay Circle Restaurant. Previously, the restaurant used umbrellas to shelter diners. Photo by Bryan Pugh. 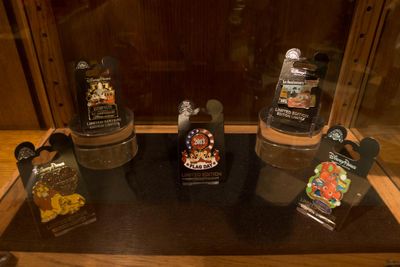 Commemorative pins, including first anniversary pins for Cars Land and Buena Vista Street, have appeared in various shops across the Resort. Photo by Bryan Pugh.

Note: Not all of these have been officially confirmed by Disney, and are all subject to change at any time. We recommend checking for updates as you plan your visit.

Costco Travel Packages – many different travel packages including visits to Disneyland and Disneyland hotels are available through Costco.

Disney's Resort Magic and Good Neighbor Magic Packages – package includes accommodations in one of the three resort hotels or at one of 40 Good Neighbor hotels; Souvenir Park Hopper ticket with voucher for admission to Mickey's Toontown Morning Madness, plus one Magic Morning (early entry) for three-day or longer Park Hoppers; preferred seating at three DCA attractions (Disney's Aladdin – A Musical Spectacular, Muppet*Vision 3D, It's Tough to be a Bug!); preferred showing of Turtle Talk With Crush (priority viewing at the first Turtle Talk With Crush show of the day, on any one day—one voucher per guest); Disney Dream coin keepsake (one per package), luggage tag and lanyard with pin; a Downtown Disney Fun Card; and a "Character Call" from Mickey, Minnie, Goofy or Crush. Contact Disney Travel or your favorite travel agent.

Military 3-Day Park Hopper Discount – active and retired U.S. military can now purchase up to six 3-Day Disneyland Resort Park Hoppers at the discounted price of $125 each, a 50 percent savings off the regular adult price. The tickets may be used through September 28, 2013 with block-out days from March 25 through April 5, and July 4.

Valid only for active duty or retired U.S. Military, including the National Guard, Reservists, and the U.S. Coast Guard. Valid and active U.S. Military (or Military spouse) ID required for purchase and admission. Limited to one (1) purchase of up to six (6) tickets per valid ID and Military member (or spouse) must accompany the persons using these tickets for Theme Park admission.

Purchase with Purchase offers – Disneyland Resort shops frequently offer a reduced–price souvenir (often a tote bag, watch, or blanket) with a qualifying minimum purchase. These are offered at Disney-operated stores only, and generally can not be combined—you must choose one of the eligible offers. If you're a passholder, the minimum purchase is calculated after your discount, and your discount does not apply to the promotional item.

Character Dining Vouchers – discounted character dining vouchers are available for purchase online, in advance of your trip, through Get Away Travel.

ESPNZone MVP Club – membership in the MVP Club does not offer any discounts on food. However, once a member you can make an online reservation for your party up to three days in advance and will get a 25 percent increase in points purchased when playing games in the Sports Arena (and 40 bonus points at activation). You must register online and your membership card will then be mailed to you within two weeks. The card must then be activated at any ESPNZone by the person who signed up for the card and ID will be required (link).