Construction of the New Disney Springs

This past spring, Disney announced what is perhaps the biggest expansion ever to Downtown Disney at Walt Disney World: Disney Springs. This new creation will double the shopping, dining, and entertainment offerings already available to guests. With construction and openings occuring in phases between now and 2016, Disney Springs is expected to feature four outdoor neighborhoods connected by a flowing spring and nearby lakefront: 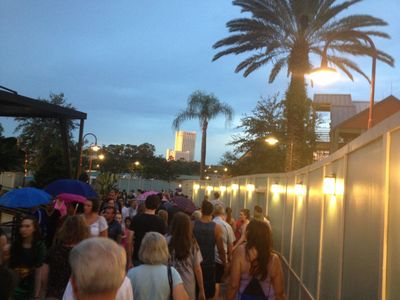 Pleasure Island boarded up for renovation. The fencing on the right hides the entire section from the Mannequins to Comedy Warehouse. The fencing in the forward section hides what was put up originally for the Hyperion Wharf. Photo by J. Jeff Kober.

Perhaps equally as challenging but "oh, so needed" is the development of two parking garages to hold around 6,000 vehicles. If you always visit Downtown Disney via a Disney bus or boat, you probably are not aware of the huge number of cars that come in and out of Downtown Disney. So more car parking is needed. The first of these to be constructed fronts the AMC theaters. The latter will be more toward the Marketplace side. Hopefully both will create access to and from I-4. 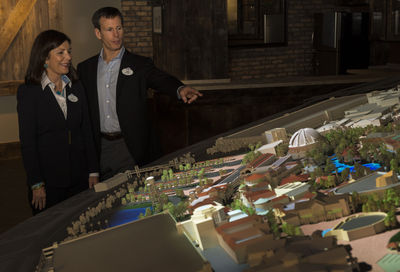 Tom Staags and Meg Crofton overlook the model to Disney Springs. Note the two parking garages in locations where parking is currently needed. Also note the bridge leading over Buena Vista drive. This is a proposed pedestrian bridge connecting to what will probably be a cast services building. The construction of that bridge as well as the parking garage will make the traffic flow through this area very tight. Photo Copyright Disney.

Originally named the Lake Buena Vista Village, the entire sprawl of activity that grew to include Pleasure Island and the West Side is a story any mall developer would be proud of. On the one hand, Disney should be embarrassed that it's having to spend money to create parking garages when it owns property twice the size of the Island of Manhattan. But frankly, who would have guessed this sprawling shopping district would be so successful? Even since the end of the club years of Pleasure Island, there are more people visiting than ever before. Any local who drives a car and parks there knows that on a Friday or Saturday evening, you can expect to spend half an hour just trying to find a parking space. The crowds are simply crazy. Lake Buena Vista intersections nearby around I-4 and the Crossroads can be stop and go.

And now much of the parking will be under re-construction. So how do you manage visiting Downtown Disney during this period? This article  offer some important suggestions for you to consider.

If as a tourist you've used Downtown Disney as a bookend to your trip, consider using it as a bookend on the morning you leave, as opposed to the night you arrive. The morning hours are simply much easier to get in and out of. You can do everything you want in probably half the time that it would take in the evening. At the time I was preparing this article, Disney's Magical Express was testing doing guest pickup at Downtown Disney--thus promoting spending time there earlier in the day. If that's a service you use while staying at Walt Disney World, check it out.

If you have a car, do the same. This is especially true of the entertainment available. Splitsville offers a lower price during the day than during the evening. A movie at AMC before noon is almost half the price than during the evening hours. Crowds at DisneyQuest are smaller. And the hot air balloon is often more reliable weather-wise in the morning than in the evening. You may fare better going earlier than later. You also won't have as many crowds when it comes to shopping, and in many restaurants you can practically walk right in. It really is a more manageable experience. 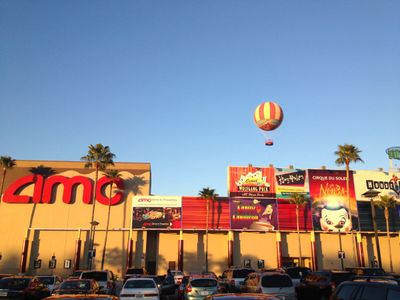 AMC Movie Theater and Characters in Flight Balloon are great places to visit in the day. Coincidentally, this lot will be the location of the first major parking lot structure. Photo by J. Jeff Kober.

The area north and west of Cirque du Soleil is really the best location to park. There are usually more spaces available there than anywhere else. And since the marina exists close to House of Blues, you can walk from one end to the other, then return using the boat shuttle from the Marketplace marina near the Rainforest Cafe. No matter what time of day, this is probably your best choice when parking at Downtown Disney, and when wanting to walk the length of the experience. 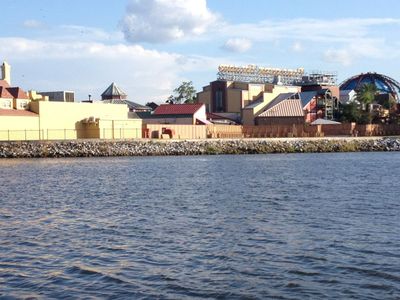 From the water you get a view of changes coming to Downtown Disney. Photo by J. Jeff Kober.

Another new option is being put in place is parking at Team Disney, across from the Pleasure Island area. This involves a little more of a walk than ever before. But it will probably be faster than trying to find a parking space in the areas closer to the shops and restaurants. 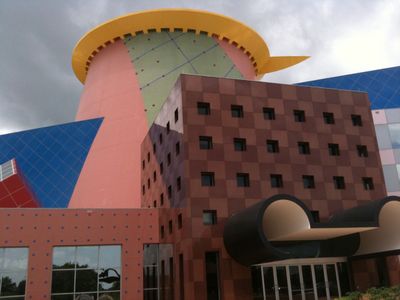 Don't let the building intimidate you. This may be one of the fastest ways to not only get a parking space, but to get in and out of the Downtown Disney area. Photo by J. Jeff Kober.

Speaking of marinas at Downtown Disney, shuttle service runs from Old Key West, Saratoga Springs, and Port Orleans French Quarter and Riverside throughout the day. This is a nice way to head over to Downtown Disney. And if going to this place is a key part of your vacation experience, consider even staying at these locations. Just note the hours of operation and frequency, as earlier times in the day are slower. There can also be long lines of guests waiting to board later in the evening. Time your travel carefully so that you get the best experience possible, then sit back and enjoy the ride. 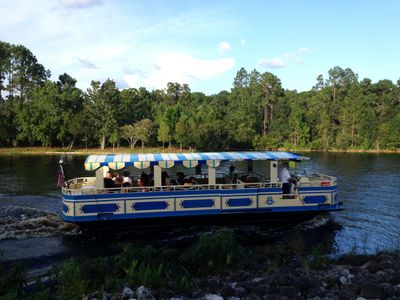 Here the boats head from Port Orleans down the bayou to Downtown Disney. Photo by J. Jeff Kober.

I used to tell people to save their time at the parks for enjoying attractions and then spend their time at Downtown Disney on their last day doing shopping. I'm not so sure that's a good idea anymore. Honestly, the Emporium on Main Street U.S.A. is really easier to get in and out of than World of Disney, which is ground zero for being busy and crazy all at once. I can't really think of any product available at the Disney stores in the Marketplace that you can't get in the parks. It may be better to get it there, and if you're staying at the resort, having it shipped to your room.

With all of this construction, I might just add that it may be a better idea to consider going somewhere else to spend your evening. The Boardwalk is one idea. It certainly has a more casual attitude. But I would also consider grabbing a bite to eat at Old Key West, or finding a hammock at nearby Caribbean Beach Resort, or watching the Electrical Water Pageant along the shores of Fort Wilderness after taking in the Hoop de Doo. Remember, many of you are on vacation, and it's not worth it if you're stuck in traffic and crowds in order to enjoy your evening. 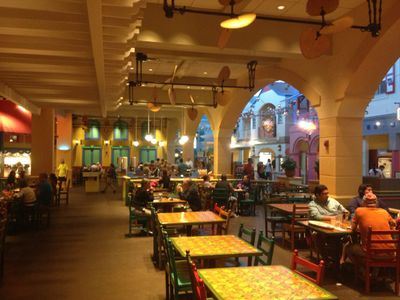 Plenty of seating nearby at Disney's Caribbean Beach Resort's Old Port Royale food court. Grab a bite to eat, take a stroll around the lake, and find a hammock to sit back and enjoy. Photo by J. Jeff Kober.

Thinking you might go to one of the major malls in the Orlando area. Know that the two outlet malls and the Florida mall are some of the biggest and busiest malls in the industry. They have huge offerings, but they also have big crowds. Mall at Millennia is also busy. If you think getting in and out of Downtown Disney is bad, you should try navigating the traffic at the Lake Buena Vista factory stores—especially around Saturday evening mass where crowds are getting in and out of Mary, Queen of the Universe next door. And the Florida Mall off of OBT isn't much better. If you are from out of the country and want to make purchases you can't get at home, go for it. But if you live in the United States, I would think carefully before going to these shopping destinations, as they really offer most of the same retail outlets you get at your mall back home. And while a premium factory outlet sounds like a good deal—believe me, it really isn't.

No matter when you go, be ready to sit back and relax. Be patient with crowds and long lines. Know that Downtown Disney is working hard to monitor traffic in the parking lots and are doing their best to make this as safe and workable as possible.

How do you manage the crowds and the parking at Downtown Disney? Share with us your ideas. Do you plan to check it out during the construction phase? Tell us what you're looking forward to.