What's This I Hear About Disney Having a Marathon?

[Editor: This article was revised October 25 with corrected information regarding registration deferrals. See #6 for updated information.]

#1 – So Disney has a marathon inside the theme parks?

Yes! It's possible to participate in an race that traverses past iconic locations in the Disney theme parks! Currently, Walt Disney World in Florida has one full marathon and a half-marathon in January, and other events throughout the rest of the year, including half-marathons and a smattering of events with shorter distances. Disneyland in California has two half-marathons (one in January and another over Labor Day).

The courses for the Disneyland races include the streets of Anaheim, while all Florida Disney races are technically on Disney property, since Walt Disney World in its entirety is so large. All courses involve going into and through the theme parks, and depending on the race, you can run past such iconic sights as the castle at the end of Main Street. 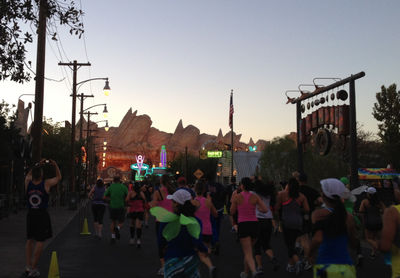 Colorful neon signs glow in the background as Disneyland Half Marathon participants run through Cars Land in Disney California Adventure at dawn. Photo by Stephanie Wien.

The full and half-marathons are officially sanctioned, with chip times and formal results posted online. In fact, the Walt Disney World Marathon is a relatively flat course that a lot of fast runners can use to qualify for Boston Marathon eligibility.

The Disney races are very popular, so most of them typically sell out well in advance. They also don't maintain a wait list and unless you are planning your trip eight months in advance, you are likely to encounter sell-outs.

The good news is that if you want to get a feel for the excitement, these road races are held over a weekend full of activities that you might be able to participate in. Most of them have a shorter 5K that doesn't sell out quite so fast. You can always be a spectator and watch, or even visit the expo. 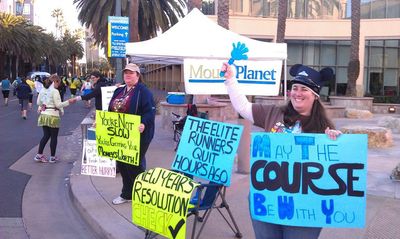 Members of the MousePlanet Cheer Station turn out to support the 2013 Tinker Bell Half Marathon participants. Photo by Adrienne Vincent-Phoenix.

How fast an event sells out depends on a lot of variables, but special anniversary years (10th anniversary, and so on), inaugural events (for example, they have recently started introducing 10Ks into the weekend of activities), and omnibus offerings ("run both events over the weekend, get a special medal") seem to be particularly popular. For example, Disney introduced a 10K for next February's Disney Princess Half Marathon Weekend in Florida, and the "Glass Slipper Challenge" (running both the inaugural 10K and the half-marathon) sold out the day registration was available.

OK, how do I know when registration opens, how soon do I have to sign up, and how do I get a reminder so I don't forget?

First, check the runDisney website and note when the events occur to see if any of them might coincide with a future trip. Second, follow runDisney on its various social media outlets (Facebook, Twitter, Instagram, runDisney blog, posts about runDisney on the Disney Parks Blog) so you have a general idea of what's going on. Finally, make sure you join the Team MousePlanet forum of our MousePad discussion boards, where we discuss Disney running in detail, including things like tips and the latest rumors. That way you'll have plenty of advanced warning about upcoming registrations. It's also a great place to meet the many MousePlanet staff members and MousePadders who have picked up a healthier lifestyle (Need to quit smoking? Get in shape? Lose some weight? We provide a great support system!)

Unlike your local races, runDisney races tend to be a little expensive. The entry fee for the 2013 marathon, for example, was $150 for the "early bird" price. Once you start adding additional races like the 5K family fun run, your registration for the weekend can easily top $200. 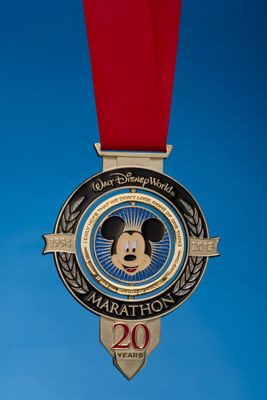 Finisher's medals from runDisney events are known for their quality; this medal was given to finishers of the 2013 Walt Disney World Marathon, which celebrated its 20th anniversary this year. The face of Mickey was on a separate piece that spun, with the other side showing an image of classic black-and-white Mickey. Photo © Disney.

Consider these Disney races as marquee events, like those of the Rock 'n Roll series, which also charges in the three figures.

Fortunately, there are ways to save money. Check out some of our previous articles for more info:

#4 – Is park admission included in my race registration?

Surprisingly, race registration does not include park admission for the rest of the day. The only time you will be able to go into the theme parks is while you're running the course itself. You also don't get an admission ticket for use on a future visit. If you want to visit the theme parks before or after your race, you have to pay for admission separately.

The only people who get "free" admission are those who sign up as official volunteers for the events, so this may be something you might want to look into. Be aware that there is a formal registration process for volunteers (you use the same form as race registration) and you must sign up well in advance of the event.

Typically, Disney offers various activities leading up to the main event. These include things like the expo, 5K family fun run, 10K, and pasta party. Florida offers a couple of nighttime road races, and Disney has after-event parties that runners can attend (and for which spectators can purchase separate tickets for). 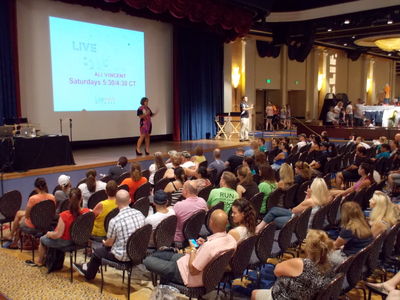 Ali Vincent, the first female winner of "The Biggest Loser" TV show and host of "Live Big With Ali Vincent" on the Live Well Network, speaks to the audience at the main stage about running the half-marathon during the Disneyland Half Marathon expo at the Disneyland Hotel. Photo by Lani Teshima.

Just be aware that these adjunct activities also require registration (except the expo), and that they can sell out pretty quickly. 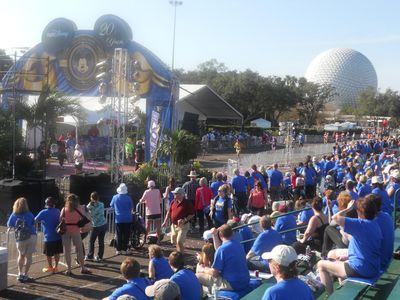 Tickets are available for access to prime spectator viewing areas, such as this ChEAR section at the finish line of Florida's Walt Disney World Marathon. Photo by Lorree Tachell.

#6 – I broke my leg and I can't run this event. Can I transfer my registration to next year? Can I sell my bib on eBay or give it to a friend of mine?

[Revised October 25] Although you cannot get a refund for your registration or transfer your registration to another person, Disney does offer deferrals if you are injured, become pregnant, or otherwise cannot participate. Here is the exact wording from the runDisney 2014 Walt Disney World Marathon web page:

Note that requests for the Walt Disney World Marathon Weekend events must be made by December 17, which is about three weeks before the races. This means that if you sustain an injury or discover after the deadline and you cannot participate, you are out of luck.

[Thanks to MousePlanet reader Ian Olexsak for this correction. Ian suffered an Achilles tendon injury that prevented him from participating in this year's Disneyland Half Marathon, and was able to request a deferral to the 2014 Walt Disney World Half Marathon in January. Based on Ian's experience, it appears that you may be able to choose an event of the same distance, and not just automatically defer to the same event the following year.]

Unfortunately, you're completely out of luck on this one. There used to be a time many years ago where Disney was more flexible, but with tens of thousands of participants, their rules are pretty strict. You cannot cancel your registration and get a refund; neither can you transfer your registration to another individual or to a future race. The only way to get your money back would be if you bought your own comprehensive travel insurance.

Mannequins don official merchandise for during the 2013 Disneyland Half Marathon Weekend. By the end of the expo when almost everything was sold out, cast members would not remove the clothes to sell them to pleading customers (we aren't sure why). Photo by Lani Teshima.

Some people have given their bibs to other people, but this is strictly unofficial, and neither we nor Disney can condone this. Should the person who winds up with the bib get injured on the course, this could cause massive confusion. Also, earlier this year in one of the women's races, officials discovered that the woman who came in second was actually a man wearing a woman's bib!

#7 – This sounds like a lot of hassle to me. Is it worth doing one of these Disney races?

This is probably the biggest question. Having participated in most of them over the course of many years, I can speak from experience that a runDisney event is pretty special. What other races offer you the chance for character meet-and-greets along the course, or are started by Mickey Mouse as fireworks shoot overhead? And I'm almost sure there are no other races (at least in the U.S.) that involve running through a magical castle! 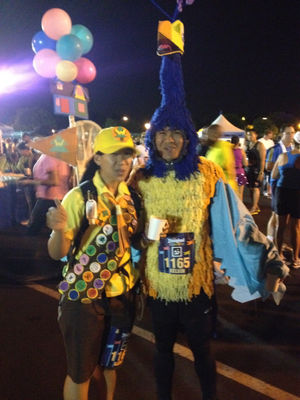 Some participants really get into the spirit of runDisney events, including a couple who dress up as characters from Disney-Pixar's UP. Photo by Stephanie Wien.

That said, these runDisney events aren't for everybody. Some of the drawbacks include:

There are also a lot of novice runners on the course for whom these Disney events are the culmination of a dream come true to live a healthier lifestyle... and for many of them, this is a very big social event with lots of friends, or full of spirit as they don costumes (such as fairy wings). If you're "all business" and you're just looking for a fast course, the Disney premium is probably not an incentive for you. 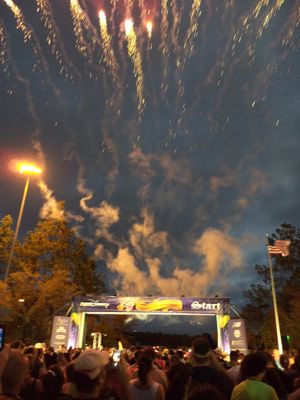 Fireworks signal the start of the 5K Family Fun Run at the Disney Princess Half Marathon Weekend in February 2013. Photo by Lorree Tachell.

However for most of us, I think it's a race you should try at least once. It's difficult to describe how I felt when I ran my first Disney event (the full marathon back in 2003). I was so tired and sore by the end, but it was so emotionally exciting; I can still feel how my sweat and tears got all mixed together, even more than a decade ago.

If there's a special place in your heart for all things Disney, and you're a runner (or want to become one), consider signing up. If you need to start training, you will have plenty of time for a future event. The next big event that'll open for registration will probably be the Disneyland Half Marathon, which happens over Labor Day weekend next year; the registration window for that event will likely open up in early 2014. In addition to the half-marathon itself, there is also a 5K family fun run/walk, a 10K fun run, and kids' races for children of all ages—offering something for everyone.

Will we see you there?