Being a runDisney Legacy Runner

runDisney legacy runners. You may have noticed them in the Disney parks after the races—they’re the ones whose finisher’s medal lanyards look a bit different from the rest, with phrases such as "Perfectly Goofy," "Disneyland Half Marathon Legacy," "Perfect Princess," and "Perfect 20." And coming this November? "Perpetual Wine-rs." Well, OK—I made that last one up. But in November 2014, runDisney is awarding legacy status on yet another group of runners, at the 2014 Wine & Dine Half Marathon, to recognize participants who will have finished all five years' worth of that race.

To be an officially recognized runDisney legacy runner, you must have registered for and finished the same runDisney endurance event since its inaugural year, keeping the streak alive by officially registering for and finishing the race year after year. All it takes is time, money (for registration and associated travel costs), good health to be able to return every year, as well as luck getting through registration. However even with loads of money, the one thing you absolutely cannot do is purchase legacy status for a race. If you didn't finish all the races, you cannot be a legacy, period.

Currently, Disney only officially offers legacy status for distances of at least half-marathons (13.1 miles), although it may offer legacy status for the Tower of Terror 10-Miler in the future. Shorter races, such as the 3.1-mile 5K (kilometer) or 6.2-mile 10K, do not participate in the legacy program.

Disney commemorates legacy status for an event beginning at its fifth anniversary; to be recognized at that time, you would have had to finish all five years of the race at that time. That is, you must officially register for, and complete \each year’s races. If you are unable to attend or finish a race (even if you register for the event), you lose your legacy status for that race—giving you strong incentive to keep entering. Fortunately, there are multiple runDisney races now that have been going on for enough years that you can be a legacy runner in many of them. Those that currently recognize legacy runners include: 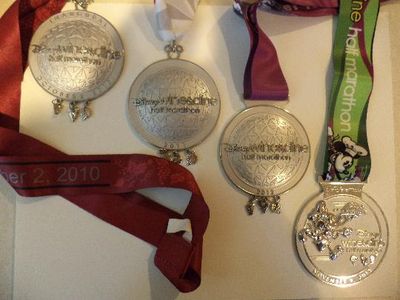 Four years down and one to go. Disney Wine & Dine Half Marathon medals from the 2010 inaugural race thru the 2013 event. Photo by Lorree Tachell.

There are no limits to the number of events you can be a legacy runner in, as long as you individually qualify for each event. You cannot qualify if you skip a year or miss the inaugural year.

In addition to bragging rights, Disney offers additional perks for its legacy runners, such as:

Legacy runners are also recognized in other non-Disney races, and eligibility is also pretty similar. Rewards and recognition vary depending on the event. Some races offer modified legacy programs that don't require completion of the inaugural event, and these may be enticing to those who haven't been running marathons for 20+ years. For example:

For many of these, the biggest benefit of legacy status is guaranteed entry, since the larger marathons have switched to a lottery system due to their overwhelming popularity. 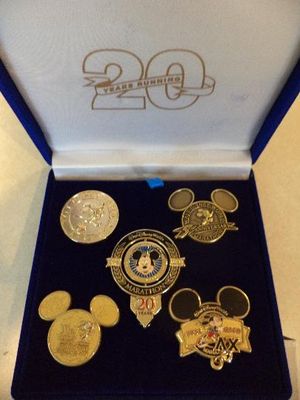 As you can imagine, the number of legacy runners for every event shrinks slightly over time. At last count there were approximately: 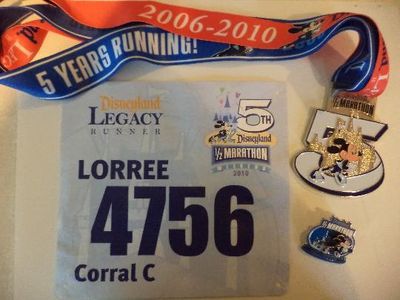 Disneyland Half Marathon Legacy Bib and lanyard from 2010. In 2015, we will celebrate 10 years! Photo by Lorree Tachell.

Some facts at a glance: 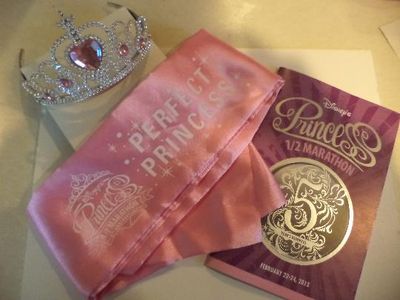 Perfect Princesses were "crowned' in 2013 at the Disney Princess Half Marathon. Photo by Lorree Tachell.

Is it worth coming back year after year to earn legacy status at runDisney events? That just depends on why you are attempting to earn legacy status. If you’re doing it for cool goodies and glory, runDisney legacy is probably not for you. However for many of us, it’s more about what we gain in setting and achieving personal goals. It takes commitment to keep coming back—but for the legacies, it’s an added perk to something we love to do. 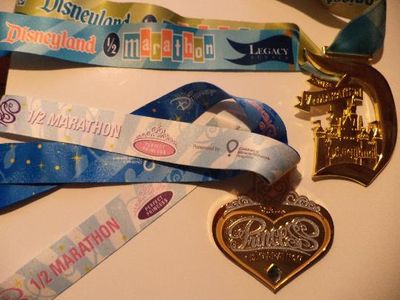 The legacy continues with the most recent Disneyland Half Marathon and Disney Princess Half Marathon lanyards. Photo by Lorree Tachell.

So if you see a runDisney legacy runner post-race in a Disney park, make sure you give them a high-five, a thumbs-up, or just a smile to acknowledge yet another year of a job well done and yet another personal goal achieved.