"It's just a zoo and we have a better one at home."

I recently read a blog written by a university professor who took Disney to task for being "fake." He actually disparaged the Kilimanjaro Safari attraction for not being in Africa. Seriously. What did Disney's Animal Kingdom do to deserve such abuse?

When Animal Kingdom opened, we all marveled at its Imagineering feats. Joe Rohde and his team had worked wonders to bring slices of Africa and Asia to those of us that might never make it there in person. Haven't we all marveled at the very real artifacts on display in the queues at Kilimanjaro Safari, Expedition Everest and the Kali River Rapids? I, for one, am willing to suspend reality for a few moments to imagine the Baobob is a real tree and not a concrete structure, the tusk marks on the side of the road were truly made by elephants and those same elephants have been scratching their hides on the termite mounds on the savanna. What does it hurt? 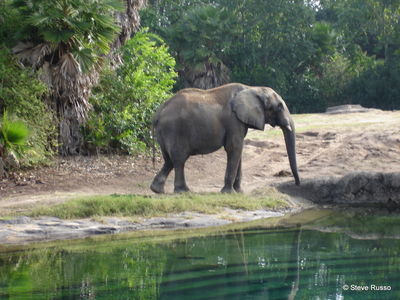 In the natural habitat? Photo by Steve Russo.

I read a recent trip report, written by my friend and fellow Disney nut, Jim Pertierra. To my horror, Jim admitted that Animal Kingdom was his "least favorite park." I gasped for a moment but then recalled how my own daughter, Stephanie, has often taken her leave of the park after just a few attractions. She also views it as her "least favorite." This caused me to do a little soul searching and realize that… wait for it… Disney's Animal Kingdom is also my least favorite park! 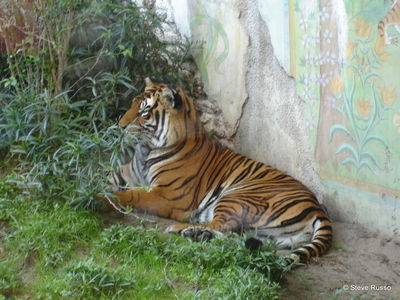 Up close and personal. Photo by Steve Russo.

There… I said it. But it's not as strong a condemnation as one might think. For me, all it means is that, if I were to rank the four major theme parks comprising Walt Disney World, Animal Kingdom would rank fourth—but a close fourth. By my estimation, Epcot leads by a smidge over Magic Kingdom which noses Disney's Hollywood Studios, which edges Animal Kingdom. In fact, the distance between first and fourth is not all that great.

So, why the negative vibe from so many people: friends, relatives and college professors? To my mind, it's perception. I think many people own a perception of what Animal Kingdom should be and are disappointed when it falls short. Take, for example, the professor's gibe that the Safari is not actually in Africa. That's sort of like being disappointed in the Peter Pan ride because pirate ships can't actually fly. If we could just suspend our hold on reality for a bit and embrace our imagination, the Safari is indeed in Africa; and Everest is real and contains a Yeti (non-moving as he may currently be); and we are walking through Asian temples on the Maharajah Jungle Trek; and… you get the picture, right? It's a theme park in central Florida—but for some of us, it's as close as we'll ever get, or maybe ever want to get, to the real thing. 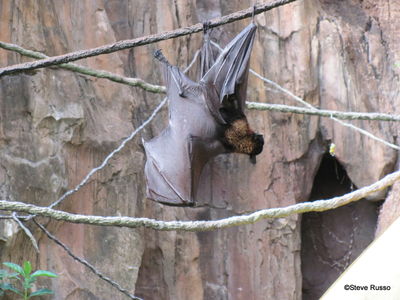 Just hangin' around for your viewing pleasure. Photo by Steve Russo.

You see, Disney's Animal Kingdom is not a zoo. At the risk of disappointing all those who insist on comparing it to one, it was never intended to be a zoo. A few years ago, Disney embarked on a significant advertising campaign to tell us Animal Kingdom was "Nahtazu." Remember hearing, "Disney's Animal Kingdom, it's a lot of things but remember, it's Nahtazu"? It's clever marketing to help us remember what it's not but… what is it?

It is an opportunity to board a Safari vehicle and see elephants, young and old alike, in their "natural" habitat. It's a chance to get up close and personal with Black Rhinos, lions, cheetahs, ostriches, zebras and Thompson's gazelle ("They're 'Tommies'")… among other animals native to Africa. 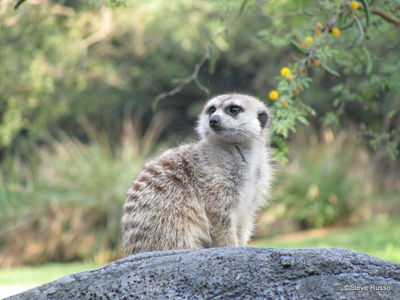 You looking at me? Photo by Steve Russo.

Animal Kingdom provides an opportunity to stroll at your leisure through either of two walking trails: the Pangani Forest Exploration Trail or the aforementioned Maharajah Jungle Trek. You'll get to see all types of creepy crawlies as well as viewing fruit bats hanging around for your entertainment. It's easy to spend significant time watching the gorillas interact or catch sight of a Komodo Dragon having lunch. Literally, I could spend a half-day on these trails alone. 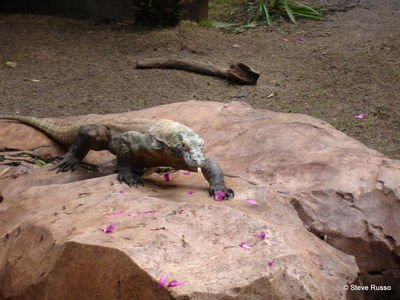 I admit it took me several visits before I ventured out on the train to Rafiki's Planet Watch (formerly Conservation Station). Sure, it offers a rather tame petting zoo but there are some very interesting exhibits inside, as well as the opportunity to see the park's veterinarians at work. I was once there to observe a physical examination given to a fruit bat and saw a bit of surgery performed on a lioness. Once in a lifetime opportunities? For me, they certainly were. 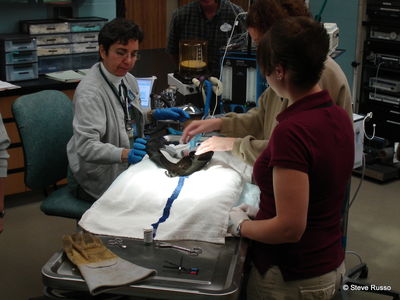 Turn your head and cough. Photo by Steve Russo.

While there are ample occasions to spend time viewing monkeys, kangaroo, hippos, meerkat, etc. it's not just about the animals. There are a number of rides and attractions that should appeal to the theme park aficionados among us. I mentioned Expedition Everest, which seems to be a favorite with the roller coaster crowd. There's also white water rafting past a burning rainforest on Kali River Rapids or taking a trip back in time on Dinosaur. For the traditionalists there are the two rides within the ever cheesy Chester & Hester's Dino-Rama: Triceratop Spin and Primeval Whirl. 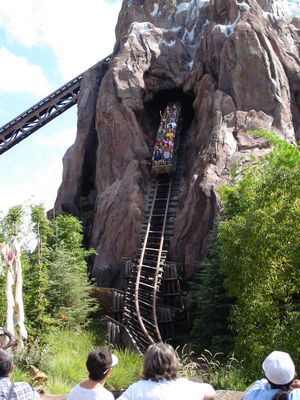 I admit to paying little attention to the Boneyard in Dinoland USA... but my two grandsons could have spent days digging and climbing in there. It's Tough to be a Bug is a first-class 3D attraction with possibly the most articulate audio animatronic in existence (Hopper). It's great fun but I would caution parents of small children that it can be frightening for toddlers (and possibly slightly older children as well). 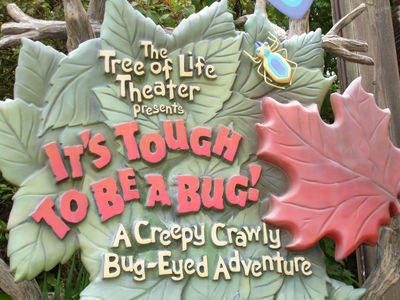 It's not for everyone. Photo by Steve Russo.

Animal Kingdom boasts what I think are the two finest live shows on property: the high-energy Festival of the Lion King and Finding Nemo: the Musical. Did you know the score for Finding Nemo was composed by the Tony Award-winning team that brought Avenue Q to Broadway? And let's not forget the always underrated Flights of Wonder. Yeah, the humor is a tad corny but it is both fun and informative.

Is it a half-day park? For me, they're all half-day parks. I'm lucky in that we visit often enough that spending all day in a theme park is a thing of the past. A morning at Magic Kingdom is followed by an afternoon break and an evening at Epcot. But, seriously, can anyone actually visit the rides and shows mentioned above—even half of them—in a half-day? I think not. 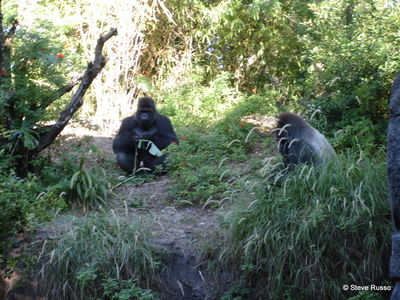 I could spend hours... Photo by Steve Russo. 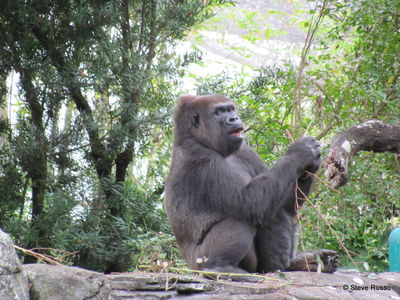 And hours... Photo by Steve Russo.

I guess my intent here is to plead the case for Disney's Animal Kingdom. It's not a zoo nor does it pretend to be one. It's also not Epcot, Magic Kingdom or Hollywood Studios but, at least in my opinion, it complements those parks nicely. I don't intend on spending an entire day there but, at least once each trip, I'll be on the Safari… and seeing the Festival of the Lion King… and riding Dinosaur… and…

As always, thanks for reading.