In a statement at last week's annual shareholder's meeting, Disney Chairman and CEO Robert A. Iger announced the return of the 2015 D23 Expo to Anaheim. The "Ultimate Disney Fan Event" is scheduled for August 14–16, 2015 at the Anaheim Convention Center, the same venue that hosted the expos in 2009, 2011, and 2013.

As with past events, Disney has released very few details about the expo, but has confirmed the inclusion of both the 2015 Disney Legends Ceremony and Treasures of the Walt Disney Archives exhibit. Returning in 2015 is Show Pass, a Fastpass-style system, for special performances.

Tickets for the 2015 D23 Expo go on sale Thursday, August 14, at D23Expo.com. Pricing has yet to be announced, but will again include a limited number of high-end Sorcerer's Package tickets, which provide special access throughout the event.

It's Tough to be Maleficent

When the Bug's Land Theater reopens on Monday, April 18, after a nearly three-week refurbishment, don't expect to see Flik, Hopper or the rest of the It's Tough to be a Bug gang return immediately. Disney Pictures is taking over the theater for a few weeks to help promote the upcoming release of Maleficent, billed as "the untold story of Disney's most iconic villain from the 1959 classic Sleeping Beauty."

Such movie previews are usually hosted in the Muppet*Vision 3D theater, but the recent release of the new Muppets: Most Wanted film may have prompted the studio to turn to the "the naturalistic underground setting" of the Bug's Land Theater for this extended sneak peek. Disney hasn't indicated how long It's Tough to be a Bug will be on hiatus.

Visitors to Cars Land will need to find a new place to fuel up in the mornings, as Flo's V8 Cafe is no longer open for breakfast. After we broke the news last week, MousePlanet readers expressed surprise by the change, asking why the seemingly popular meal service ended. A cast member at the location said that fans of the brioche French toast and chicken tamale breakfast platter will have one more opportunity to start (or end) their day at Flo's, as the location will have a breakfast service during the Rock Your Disney Side 24-hour event, though they weren't sure if the restaurant would serve breakfast on May 23, May 24, or both.

Breakfast is still available at these Disney California Adventure locations; click each link to see the full menu.

[The following, by MousePlanet reader currence, is a very thorough report that details her experience with the electric vehicle charging station now available at the Mickey and Friends parking structure. This was originally posted to our MousePad discussion forum; we are reprinting this with currence's permission.] 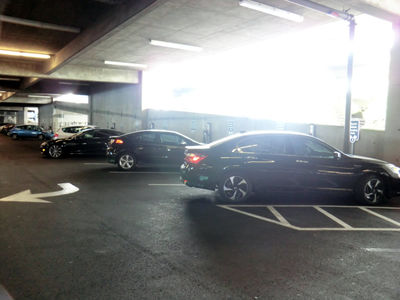 The ground floor of the Mickey and Friends parking structure at Disneyland has an electric vehicle charging station consisting of a row of 20 Chargepoint chargers. Photo by Adrienne Vincent-Phoenix. 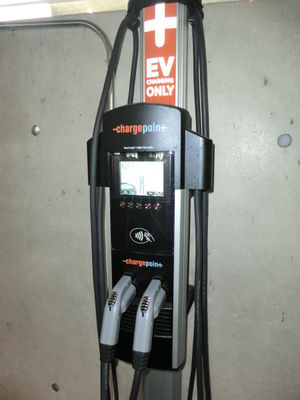 Disneyland offers 20 Chargepoint chargers, like this one, where visitors can recharge their electric vehicles. Photo by Adrienne Vincent-Phoenix.

Early registration for the Avengers Super Heroes Half Marathon Weekend events opened last Wednesday for annual passholders and Disney Vacation Club members, and the available spots for the 5K sold out in under an hour. The Diaper Dash and two more runDisney Kids Races sold out later that afternoon, and by Thursday afternoon the half-marathon was also full.

runDisney hasn't indicated what percentage of the total race capacity was offered during this early registration process, but the quick sellout should give fair warning to anyone planning to sign up for the races when registration reopens for the general public at 9:00 a.m. Pacific (noon EST) tomorrow, Tuesday, March 25.

It's unusual for a runDisney 5K race to sell out before a weekend's main race; we suspect the race's theme is attracting a high number of non-endurance athletes to sign up with friends for fun. If you and your friends are planning on donning your capes for the 5K and have yet to register, we strongly suggest everyone in your group sign up as soon as registration opens (that means pinning down anyone in your group who's yet undecided). The 5K events typically accommodate far fewer participants, and this one—even with its fee of $70 (almost unheard of for a 5K)—will likely sell out in a flash.

Once you've secured your spot in the race, come join our Team MousePlanet discussion forum to chat with other runners and share training plans and tips.

Disney parks to celebrate "it's a small world" with global singalong

In the meantime, you can take part in this celebration by going to smallworld50.com by recording yourself singing the iconic tune. You will need to have a webcam; the website does not give you an option to upload a pre-recorded video. You can also create a virtual Small World doll at the website.

Disney is donating $150,000 to UNICEF (United Nation's Children's Fund) in recognition of the attraction's anniversary, and is donating an additional $1.00 for every singalong video or doll created, up to $100,000.

If you have never experienced the joy that comes with not being able to get the song out of your head, we suggest you keep your browser open at the website so you can keep listening to the song, sung by a collage of contributors.

...With President Obama confirmed to give the commencement address at the University of California, Irvine graduation ceremony on June 14, visitors planning to visit Disneyland that day should leave extra travel time to get through Orange County. The graduation ceremony recognizing 8,000 undergraduate, graduate, and professional school students will be held at Anaheim Stadium, less than three miles from Disneyland.

...There are still a few spaces left for our Spring 2014 MouseAdventure event, "MouseAdventure Card Games: Deuces Wild!" You can learn more about the event and register your team at MouseAdventure.com. Be sure to sign up for our MouseAdventure Newsletter, find us on Facebook or follow us on Twitter for the most recent updates.

...You can still enter to win a trip to both Walt Disney World and the Disneyland Resort in the Disney Side of Summer Sweepstakes. Enter via Twitter once per day now through March 31. Full details and complete rules are on the Disney Parks blog.

...Disney VoluntEARS were among a group of 200 volunteers who turned an empty lot into a kid-designed playspace at John Marshall Park in Anaheim. The City of Anaheim, Anaheim Family UMCA, organizers from KaBOOM!, and area residents also participated.

Question of the Week

Reader kraftykaren49 has a question about a program offered exclusively for guests of the Disneyland Resort Hotels:

I found out that there is a power walk in California Adventure that leaves from the Grand Californian and is for [Disneyland Resort Hotel] guests. It sounds really cool, but I'm wondering how fast they walk. Has anybody done this?

Have you participated in this early morning walk? Come share your experience on our MousePad forum.