With all of the focus on the new Seven Dwarf's mine train premiering at the Magic Kingdom, it might feel that the 25th anniversary of Disney's Hollywood Studios was left in the shadows. So we're here to celebrate this magnificent park, and to share all that occurred on May 1st, 2014. 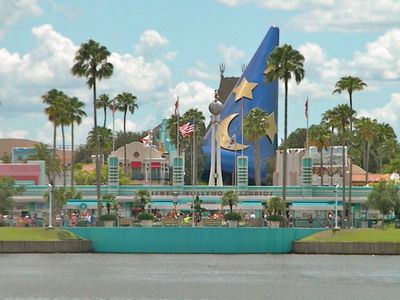 First, a 25 year timeline that leads up to this event. It's been a busy 25 years! See if you can find when your favorite attractions opened:

May 4, 1989: Walt Disney World's third major theme park opens. Along with it, The Great Movie Ride, SuperStar Television, The Monster Sound Show, The Magic of Disney Animation, and the Back Stage Studio Tour all open. Restaurants like the Hollywood Brown Derby and Prime Time Cafe also open. The Citizens of Hollywood make their debut as well as "Hollywood! Hollywood! A Star-Studded Spectacular." 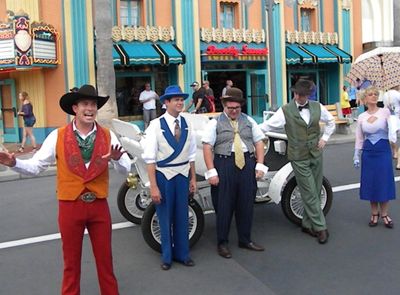 The famed Citizens of Hollywood, a streetmosphere improvisation group, has been performing for 25 years. Photo by J. Jeff Kober.

October 1989: The Walt Disney company signs an agreement with Henson Associates Inc. For MuppetVision 3-D film adventure, plus other attractions at the Studios. 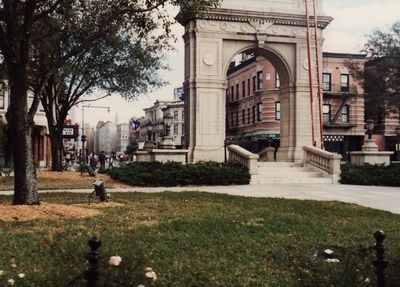 What was once a part of the Backstage Studio Tour, New York Street—now known as Streets of America—became a common guest area, and used for such appearances as Teenage Mutant Ninja Turtles and the Osborne Family Spectacle of Dancing Lights. Photo by J. Jeff Kober.

November 1990: "Sorcery in the Sky" fireworks opens in conjunction with Fantasia celebrating its 50th anniversary. 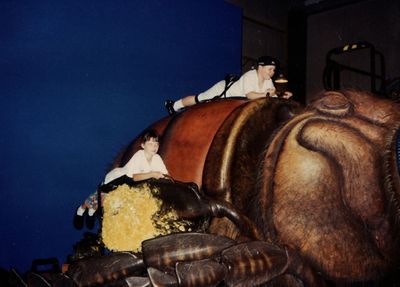 Movies like "Honey I Shrunk the Kids" and "Who Framed Roger Rabbit" were a big part of the earlier days of the park. Here, my daughter Mikell is on a flying bee in the Inside the Magic: Special Effects and Production Tour. Photo by J. Jeff Kober.

November 22, 1991: Beauty and the Beast stage show begins performances in the Theater of the Stars. 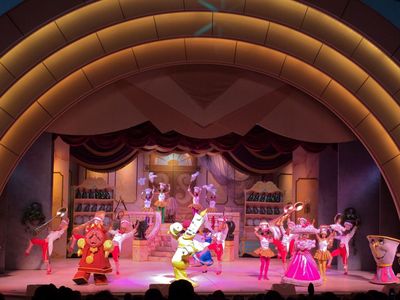 Beauty and the Beast would play three different venues over its 23-year career. Photo by J. Jeff Kober.

May 28, 1993: Groundbreaking is held for the Hollywood Tower Hotel. Beauty and the Beast is moved to the Backot Theater.

June 1994: Beginning with the Making of the Lion King, the Walt Disney Theater would host making-of movies series to include Pocahontas, Toy Story,, and The Hunchback of Notre Dame.

June 12, 1994: Sunset Boulevard opens with new shops, dining and a 1,500-seat Theater of the Stars, hosting the popular Beauty and the Beast show.

July 22, 1994: The Twilight Zone Tower of Terror attraction opens at the end of Sunset Boulevard. 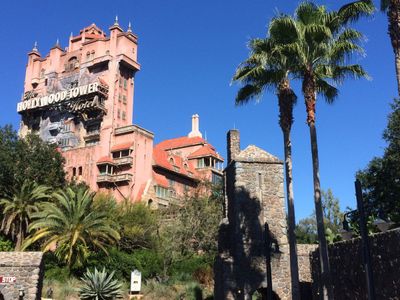 The original drop in the Tower of Terror was simply one drop. Over time, a variety of drop profiles were featured, until the present-day experience, which is much longer and more random in its sequence. Photo by J. Jeff Kober.

June 23, 1995: The Spirit of Pocahontas opens later at the Backlot Theater.

June 21, 1996: Disney's The Hunchback of Notre Dame – A Musical Adventure opens on the Backlot Theater.

1997: The HBO series, "From the Earth to the Moon," starring Tom Hanks, was produced throughout the year.

May 1997: Star Wars Weekends is introduced. Among its popular activities is the Jedi Training Academy, which would eventually become a permanent fixture at the park.

July 1997: ABC Sound Studio opens in place of The Monster Sound Show, where guests create a variety of effects to the theme of ABC-TV children's programming.

June 19, 1998: Mulan parade premieres. The film itself was produced primarily by Walt Disney Feature Animation at the Disney-MGM Studios.

June 1999: Bear in the Big Blue House stage show premieres on Soundstage 5, where once the Soundstage Restaurant stood. 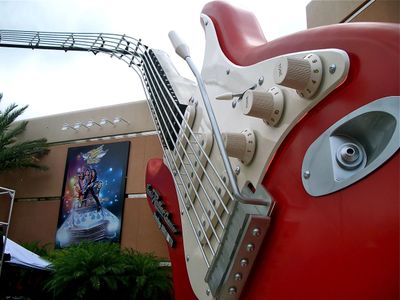 April 7, 2001, Who Wants To Be A Millionaire – Play It! starts daily shows on Mickey Avenue (now Pixar Place). It permanently ends the Inside the Magic: Special Effects and Production Tour.

October 2001: A property-wide 100 Years of Magic celebration brings to the studios "Disney's Stars and Motor Cars" and Walt Disney: One Man's Dream. It also brings a large Sorcerer Mickey hat to the end of Hollywood Boulevard.

December 9, 2005: Journey Into Narnia: Creating the Lion, The Witch and the Wardrobe opens on Mickey Avenue. 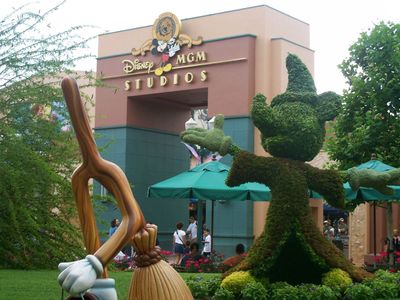 March 14, 2008: Block Party Bash debuts at the park, having moved over from Disney's California Adventure. 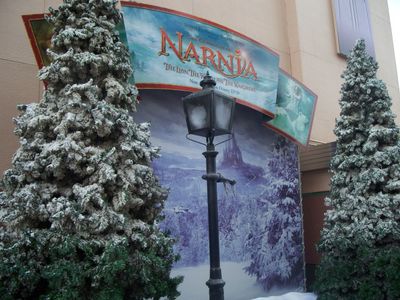 The two Narnia attractions are just a handful of the behind-the-scenes kinds of experiences guests would come to experience at the park. Photo by J. Jeff Kober.

May 20, 2011: Star Tours: The Adventures Continue takes guests to new places in the universe.

We now come to the present. In the morning the crowd entered the park, receiving special anniversary pins and commemorative park guides. At 10:00 a.m., they were welcomed to a special rededication ceremony. Don Lampkin, a 25-year veteran Disney cast member who works at at Disney's Hollywood Studios, served as master of cermonies. You may know Don as one of the hosts of Who Wants to Be a Millionaire-Play It! He helped host the Star Today program, and can even be seen currently at Lights! Motors! Action! show.

Don welcomed the crowd, then introduced Vice President of Disney's Hollywood Studios, Dan Cockrell, who honored some two dozen cast members who had been with the park since day one. Among them was Noel Campbell, who was selected among them to be especially honored.

Dan then asked for a show of hands of those who were there on opening day as park guests. He invited one, Linda, to join him on stage and share her memories of that opening day, as well as the years that followed. She expressed her love for The Great Movie Ride and Star Wars Weekends.

Don invited Linda, Noel, Dan, and Mickey Mouse to each place a hand in cement on a special anniversary plaque. Then Dan re-read the opening-day dedication speech given by former Disney CEO Michael Eisner:

"The World you have entered was created by the Walt Disney Company and is dedicated to Hollywood—not a place on the map, but a state of mind that exists wherever people dream and wonder and imagine, a place where illusion and reality are fused by techological magic. We welcome you to a Hollywood that never was and always will be." 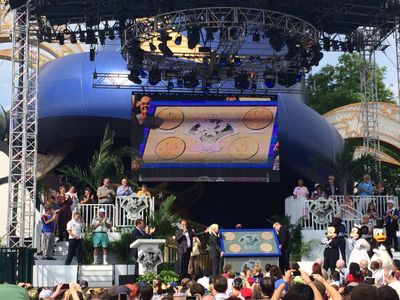 Silver anniversary veteran cast members of Disney's Hollywood Studios are present as a special hand print set is shown to guests at the re-dedication ceremony. Photo by J. Jeff Kober.

The festivities continued throughout the day. There was a line 60 to 90 minutes long for special 25th anniversary merchandise, which included shirts, bags, bear plush, keychains, and pins. Guests could also purchase a 25th anniversary chocolate Nutella cupcake. In the evening, guests gathered to watch the grand motorcade down Hollywood Boulevard that included Mickey and Minnie, Belle, Dock McStuffins, Phineas & Ferb, and Captain Jack Sparrow. 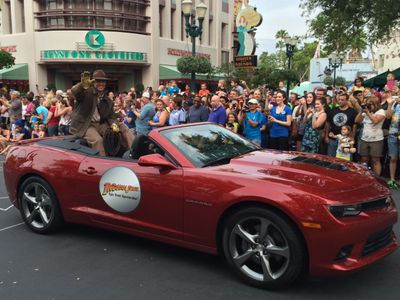 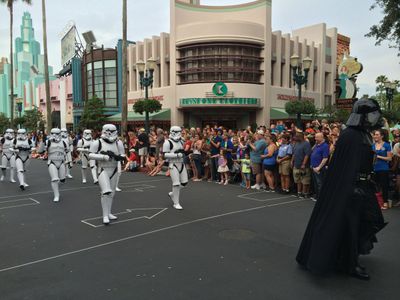 Darth Vader and his Stormtroopers show up as well. Photo by J. Jeff Kober. 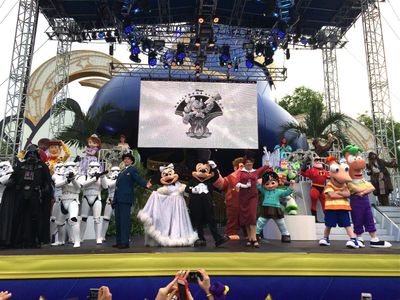 They all gather for a big photo op on stage in front of the sorcerer's hat. Photo by J. Jeff Kober.

Guests were also able to celebrate the night with a DJ dance party. That led into a major fireworks event that honored 25 years of Disney's Hollywood Studios, which included music from Toy Story, Indiana Jones, Star Wars, Pirates of the Caribbean, The Little Mermaid, The Muppets, and Beauty and the Beast.

What was significant about the event was the number of people who came wearing old Disney-MGM Studio shirts, and who simply enjoyed reminiscing about one of their favorite parks. There were many there in attendance that day. But it was only one day.

Still, it doesn't have to end here. Where you there when Disney-MGM Studios opened? What are your favorite memories over the years? Are there any attractions you particularly miss? And what would you like to see in the next 25 years at Disney's Hollywood Studios. Please share your experience with us, and keep the celebration going!