Anyone who books the Frozen Summer Fun Premier Package receives:

The package costs $59 for adults and $34 for children, including tax. No discounts apply to this offer. VIP package holders must pay for park admission to participate in the events. To purchase tickets, call (407) 939-1939.

The daily Anna and Elsa's Royal Welcome procession has a surprise for Disney's Hollywood Studios' guests looking to participate in the royal parade, according to Disney Parks Blog. 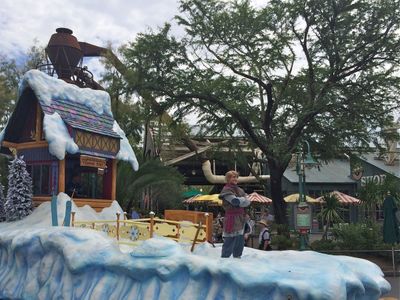 Anna and Elsa's Royal Welcome procession at Disney's Hollywood Studios looks more like a parade and features not only skaters and ice cutters, but Kristoff himself. Photo by J. Jeff Kober.

Disney Social Media Manager Jennifer Fickley-Baker reports that each day, cast members randomly select 20 to 30 children to march in the royal procession as "honorary royalty." Fickley-Baker suggests that children wanting to be chosen should dress in their Arendelle finest and be seen around the park. While Fickley-Baker did not guarantee this would get a child selected, she said "word on the street" points to this tip as helping out some lucky kids during the July 5 premier of the parade.

On July 1, a visitor at Disney's Hollywood Studios reported witnessing a crash during a morning performance of the Lights, Motor, Action! Extreme Stunt Show that involved one of the stunt cars.

According to photos posted to Instagram by user Tony Caggiano (@TonyCagg), it looks like the accident happened during the final scene of the show. A red stunt car is supposed to drive out a second-story window onto a ramp built inside a converted semi truck. A black stunt car immediately follows the red car as part of the chase scene.

During this stunt, the photos seem to show the red car clipping a support beam over the ramp during the jump, causing damage to the car and the truck. According to Caggiano, the black car followed as planned, but skidded to a stop and backed up the ramp without colliding with the red car. He also reported that no drivers suffered injuries from the accident.

This YouTube video shows what the finale scene should look like (jump to the 7-minute mark if the video does not automatically start there.)

Runners participating in the 2014 Twilight Zone Tower of Terror 10-Miler Weekend can look forward to some "glowing" encouragement and rewards thanks to the new medal designs introduced by runDisney last week. 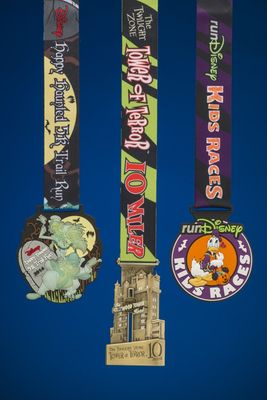 Any child crossing the finish line during one of the kids races receives a Donald Duck medal featuring the popular character trick-or-treating.

Participants in the Haunted 5K Trail Run who complete the course receive a medal with the Haunted Mansion's hitchhiking ghosts that also glows in the dark.

The Twilight Zone Tower of Terror 10-Miler Weekend is on October 3 and 4, 2014. The adult races are sold out, but spaces remain in the kids' races. Visit the race's official website for more information.

Views from "Around the World"

From the Fourth of July and the debut of Disney's Hollywood Studios' Frozen Summer Fun, to World Cup excitement and continued construction at the theme parks, Walt Disney World keeps things buzzing around the resort. Here are this week's highlights: 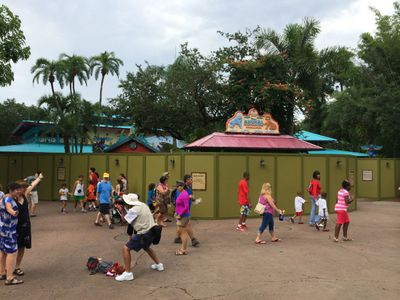 Disney's Animal Kingdom's Discovery Island continues to experience a number of refurbishment projects, including this one to the shops on the eastern side as you enter the village. Photo by J. Jeff Kober. 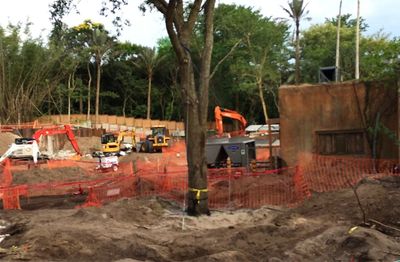 Construction continues in Disney's Animal Kingdom's Africa on the east side of Harambe Village. Photo by J. Jeff Kober. 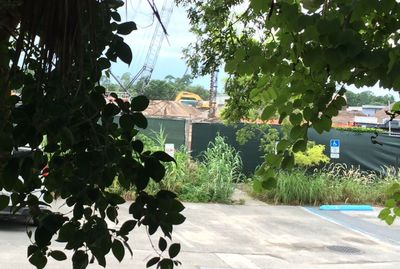 Three large cranes sit on the site of Disney's Animal Kingdom's biggest construction project: Avatar Land on the west side of the park. Photo by J. Jeff Kober. 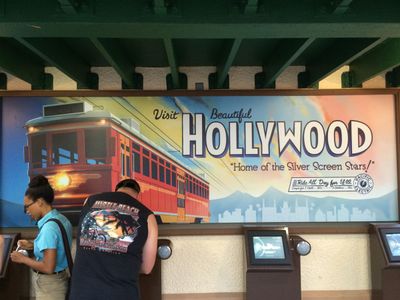 A new Fastpass+ area takes the place of Disney's Hollywood Studios' former tip board and a new Hollywood sign welcomes guests to the area. Photo by J. Jeff Kober 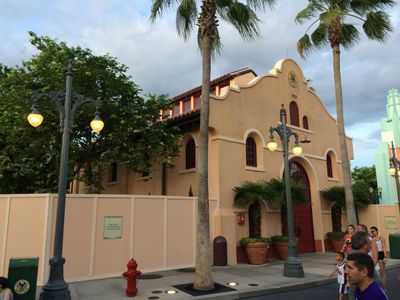 Construction walls cover the Power and Light building at Disney's Hollywood Studios as a new refurbishment project begins. Rumors suggest a Starbucks could take the place of the former retail area located at the end of Hollywood Boulevard. Photo by J. Jeff Kober. 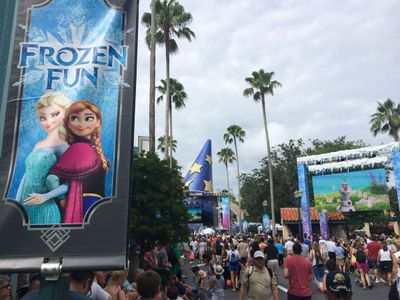 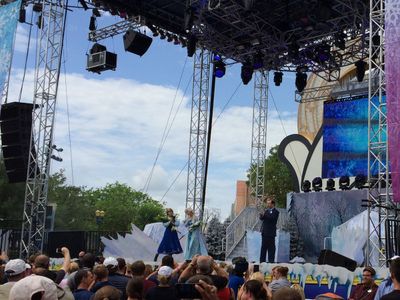 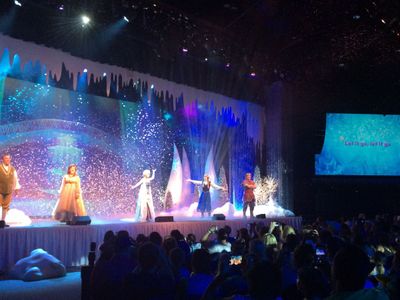 "For the First Time in Forever: A Frozen Sing-Along Celebration" provides Disney's Hollywood Studios' visitors the opportunity to join Queen Elsa, Anna, Kristoff in singing some of the film's favorite songs. Photo by J. Jeff Kober. 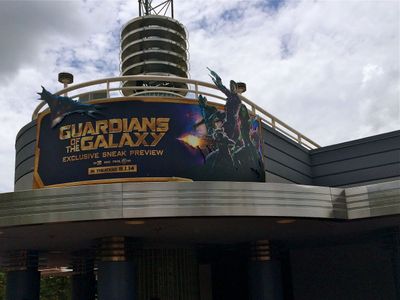 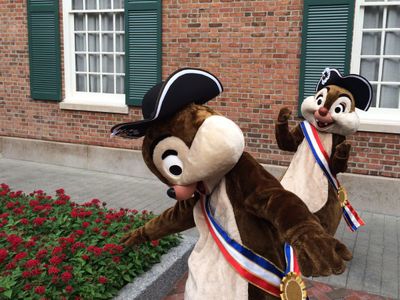 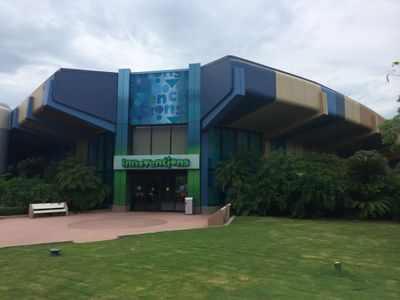 The portions of Innoventions facing the east and west sides of Future World are spruced up with a new coat of paint. Photo by J. Jeff Kober. 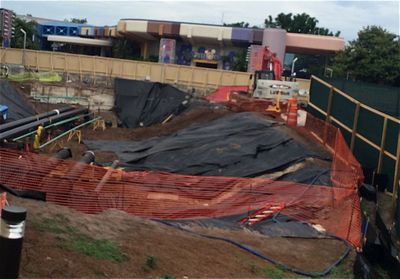 Crews fence off a massive area at Epcot just south of Club Cool to tend to a possible a sink hole extending from the nearby lagoon. Photo by J. Jeff Kober. 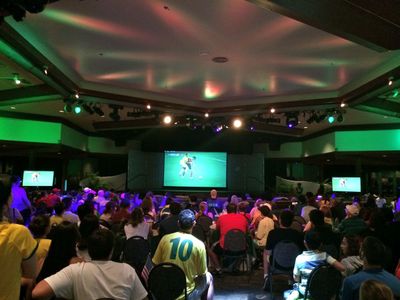 World Cup fans enjoy a match between Columbia and Brazil at a viewing area created in the Odyssey Restaurant. Photo by J. Jeff Kober. 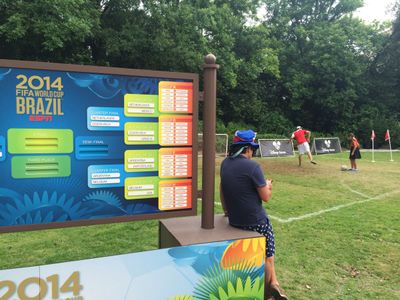 Epcot guests in World Showcase line up to try to score a goal against a skilled cast member as part of the World Cup festivities. Photo by J. Jeff Kober.

... A sneak preview of the new Marvel film Guardians of the Galaxy began showing at Disney's Hollywood Studios on July 5. The movie, which features the popular Avengers characters, hits theaters on August 1, but park visitors can head over to see a 3D sneak preview at the ABC Sound Studio.

...Walt Disney World's latest contest, "Recreate the Magic," invites entrants to recall magical memories made during a previous trip, in order to win a future trip to Walt Disney World, including an 8-day, 7-night vacation package for six people to the Walt Disney World Resort, round-trip airfare for six people (the winner and five guests), round-trip airport transfers to and from the Walt Disney World Resort (Magical Express service), accommodations at one 2-bedroom suite or villa at a Walt Disney World hotel, Magic Your Way tickets, and more. All entries must include a photo of people having a great time at Walt Disney World (preferably between 1971 and 1990, but not limited to that time period) along with a brief (no longer than 1,500 words) description of the magical memory experienced in the photo. Entrants can submit their photos and memories until 11:59 p.m. on August 11 and judging should end on August 11, 2014, according to the contest's official rules.

...Looking for more contests? Then, take a look at another Disney-sponsored contest: Be the 8th Miner for your chance to win. One lucky person wins the grand prize: an eight day, seven night vacation for four people to Walt Disney World including airfare, Magical Express transfers to a Walt Disney World resort, four 7-Day Magic Your Way Park Hopper Tickets, an $800 Disney gift card, a character meet and greet photo opportunity and winner's choice of any Disney Photopass service, up to $300.The contest, which ends July 22, asks entrants to show off their "Seven Dwarfs-inspired skills" with pictures or smartphone video. Each week, the official Be the 8th Miner website publishes a new challenge for entrants to use as inspiration for their pictures and/or videos. Once entrants submit their photo or video, they need to follow @WaltDisneyWorld on Twitter and tweet their entry with the hashtag #8thMinerContest. The Be the 8th Miner contest has a number of specific rules to follow to make sure your entry does not violate any copyrights, so please go to the official rules website and read them carefully before you enter.

Question of the Week

Our Question of the Week comes from MousePad Forum member Tinkermommy:

Hi all! We have the crazy idea that we'd like to squeeze in a trip to Florida before the Tinkerteen moves to college in August (Yah, already) I'm finding what we'd like to do sort of complicated, however, for a not-so-talented trip planner like myself, and am looking for any tips/suggestions you may have.

From Orlando, we'd like to go to Miami for a couple of days to meet family. I know it's never going to be cheap, but I'd like to figure out how to do all of this as cost-effectively as possible, since tuition and housing payments are going to send us to the poorhouse very quickly.

How would you schedule a trip like this? Would you stay at one resort, then move? I would be very grateful for any help anyone can offer. Thanks!

Get in on the conversation over at MousePlanet.com's MousePad forum and share your Disney expertise!

As previously reported by MousePlanet, some refrigerators in non-Disney Vacation Club rooms at Walt Disney World are being replaced due to a product defect. All Walt Disney World Resort rooms with the exception of DVC Villas, the family suites at the Art of Animation and All-Star Movie resorts, and the cabins at Fort Wilderness are impacted. Disney says "the schedule for replacing the refrigerators at these Resorts is expected to last several months."

In the interim, if you have a reservation at a Walt Disney World Resort hotel and need a refrigerator for medical reasons, we recommend contacting your resort directly to inquire about availability during your trip. The hotel should be able to arrange for one if your room does not yet have a new refrigerator, but supplies may be limited while they work to replace all of the malfunctioning units.