A Kiss for Luck on Main Street

We're just a few short weeks from Labor Day weekend and the ninth annual Disneyland Half Marathon Weekend, when tens of thousands of runDisney race participants descend on Anaheim with their families and their friends.

For race participants, the weekend is full of energy and excitement. After months of training, they're almost ready. On race day, their main focus will be on completing their respective race(s), collecting the medal(s), and spending the remainder of the day in the parks basking in the glow of achieving their goals.

But what about friends and family members who are heading to the resort on race day to offer support for their participants? How exactly does such a person offer support? Rather than simply saying you're supporting your friend or family member, there are specific things you can do to help.

The night before an event can be stressful for participants, especially if this is their first running or walking event. This stress often translates into chaos at home or at the hotel, as "nothing is going according to plan."

This prerace preparation can happen well before the day of the race (or even the day before). Thomas, my CSO (Chief Support Officer), often goes through my prerace prep list with me to make sure I haven't overlooked anything, such as packing my inhaler in my luggage, which I am prone to do.

A 5:30 a.m. race start means a very early morning for the participant (before 3:00 a.m. for some, depending on how long it takes to get to the race), but but you may as well get up at the same time. Participants may try to be quiet, but it's almost impossible to get ready and be out the door (especially in a hotel room) without waking others up in the room, and they will appreciate your show of support if you at least offer up a half-asleep hug for luck (as opposed to a grunt from under a pile of blankets) as they walk out the door.

runDisney races in Disneyland afford the luxury of start line spectator access, which is not an option in Walt Disney World (where race participants must walk a significant distance to the race start). If you go to the starting area in Disneyland, don't be surprised if you lose your participant in the corral crowds. If you haven't seen a runDisney race start, though, it can make for a pretty exciting morning.

Even though he couldn't see the start of my first marathon, Thomas tagged along on the bus with me to help calm my nerves and keep me focused by reminding me to keep my fears in my hat just like Lanny in "Prep and Landing." That image and the hug that rivaled that of those parting on the Titanic helped me get through my first 26.2 runDisney mile event. 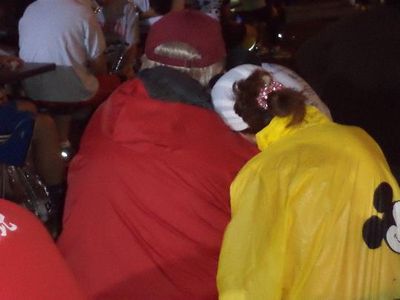 It's early for everyone including the spectators. Photo by Lorree Tachell.

"I'll be here" locations along the course route

While is it easier to hop to different locations in Disneyland than in Walt Disney World, it still takes planning to determine where you will meet up with your participant. Determine where you can get to based on your participant's estimated arrival time to that location. Make sure to take into consideration which corral they are in to adjust their estimated time of arrival accordingly. Many roads around the park and throughout Anaheim become blocked, with access limited to on-foot transportation, so it's easiest to pick just one or two spots along the course, as well as the finish.

Thomas usualy waits for me right outside our hotel, as it's on the half-marathon route around mile 1. I look forward to seeing his bleary-eyed smiling face as he holds a mug of coffee in one hand and is waves frantically to get my attention with the other. One other great vantage point in Disneyland is the Esplanade, between Disneyland and Disney California Adventure parks, as the race participants will be more disbursed by the time they reach that location, making it easier to spot your participant in the herd. 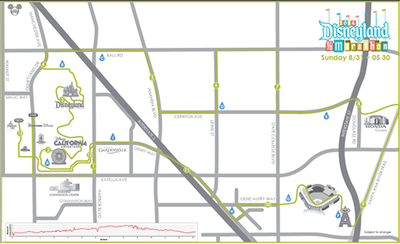 Your own wardrobe choices

This one is simple. Go bright. Really bright. Neon if you have it. This is not a time to be shy and try to blend with the crowd. Funny hats help, as well—especially tall ones that stand above the other spectators. Make sure your participant knows what you are wearing, and note what they are wearing as well. Thomas and I have actually missed one another because we removed our jackets bearing the colors we were looking for and had different colored shirts on underneath. 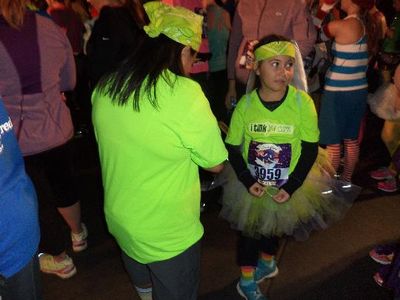 A funny sign not only cheers up your participant but can make the day for other race participants as well. One of my favorite race memories was running a 5-kilometer (3.1-mile) event back home in Spokane with a friend whose husband surprised her by showing up unannounced along the course with a big sign that just said "I love you" on it. It totally made her day, and drew a lot of "awws" from those running around us. If you need ideas, just search "funny running signs" online. 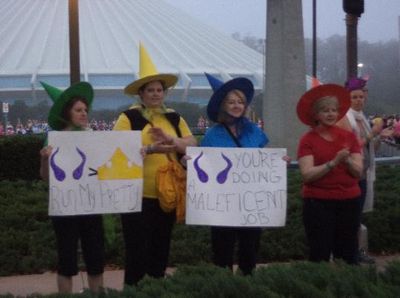 There are a variety of ways to track your participant along the course. runDisney offers free runner tracking that emails you or sends you text messages to your cell phone when your participant crosses certain course mile markers. Participant can also sign up to have their thresholds broadcast over Twitter or Facebook. Be warned: Participants have experienced issues in the past with official notifications not being made in a timely manner. We assume the sheer number of participants makes things a little chaotic in their system.

There are also smartphone applications you can use as well, such as the paid version of RunKeeper, and the iPhone Find Friends app. Just make sure to test the app out prior to the race event so you know how it works and keep in mind they aren't always 100 percent accurate. One of my old running buddies was in Portland doing her first marathon and her husband was meeting up with her along the course via bike. The app he was using to track her showed that he was quite a ways ahead of her so he popped into a bar for a quick beer. Turns out it had a hiccup and missed sending him an update. He had barely touched his brew when he looked out the window and watched her run by. Oops.

While there are official photographers all along the course, the pictures that you take often are the ones that mean the most. Perhaps it's the last look as your participant heads out the door in the morning, capturing their reaction to seeing you out along the route, the look of disbelief or joy at receiving their medal at the finish area, or the proud look as they wear their medal in the park. And you may even capture a memory that your participant doesn't even remember. I bonked very hard at mile 10 of the 2006 Walt Disney World half-marathon. It was my first half, and to this day, I still don't remember the last three miles of the race except for a choir singing, which I hoped was real and not a heavenly sign. Thomas captured my finish (I was running—imagine!) as well as the excitement of Chip and Dale as I crossed the finish line (I had no idea they were there). 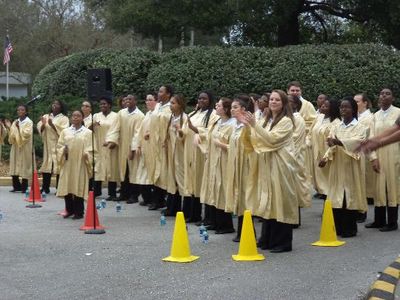 They are heavenly and very real. Photo by Lorree Tachell.

No matter what distance your participant may have finished, celebrating the accomplishment post-race with friends and family makes reaching the goal that much sweeter. If you can, bring along a cooling towel and a bottle of cold water with you to the finish line. Cold chocolate milk is also a winner and will help your participant with post-race recovery. Just make sure you agree on a meet-up location so you can easily find one another in the crowds. Don't count on using your mobile phone to find your participant post-race, as the finish line area might not provide adequate cell coverage, or the participant's phone battery may have died during the race. 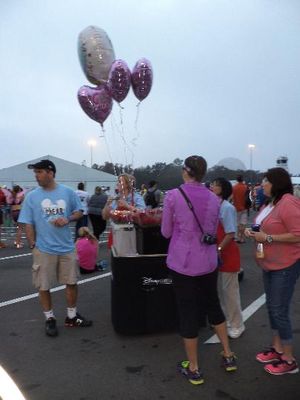 Roses and balloons for sale at the finish—runDisney thinks of everything. Photo by Lorree Tachell.

These are just a few quick ideas for friends and family to show support for their runDisney participant. runDisney events make memories; some are fleeting but many stay with an participant a lifetime. My first half marathon was memorable in so many ways but I will never forget seeing Thomas waiting for me on Main Street in Walt Disney World. Seeing him standing there in the crowd meant more to me than he will ever really know. A kiss and a hug for luck and I happily headed off towards Cinderella's Castle secure in the knowledge that no matter what happened that day, Thomas was there to share it with me. You just never know when you could be making a special memory for your runDisney participant.