On February 13, 2014, MousePlanet published “Rules of the Road: A runDisney Race Etiquette Guide." Since we are just a few short weeks away from Disneyland Half Marathon Weekend, it's time to add a few more items to the original guide, as well as clarify a few from the original article.

In the previous article, we looked at a "gotcha" known as proof of time, an optional field in the online race registration form that runDisney uses to determine which of the starting corrals to assign you. Designed for those who are planning to finish the Walt Disney World Marathon in under 6:30 hours, any runDisney half-marathon in under 3:15 hours, or the Tower of Terror 10-Miler in under 2:00 hours, this information is not needed for the races that are 10 kilometers (6.2 miles) or 5 kilometers (3.1 miles) long.

Remember, if you don't provide a proof of time, you will be placed in one of the last starting corrals! 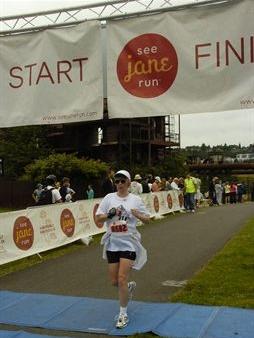 Faster finish times at smaller, less-crowded races can come in handy for proof of time. Photo by Thomas Skripek.

Previously, anyone with a signed waiver and a copy of photo identification could pick up a race packet at the runDisney expo. This allowed families, friends, and teams to pick up multiple packets, but it also provided an easy opportunity for race participants to sell their race entry, which is not allowed under runDisney rules. Starting with the inaugural Avengers Super Hero Half Marathon Weekend this November, race participants must show government-issued ID and can only pick up their own race number bib. For many participants coming in from out of town or for those who must work during the hours that the expo is open, this new policy promises to create a lot of confusion and probably more than one ugly scene at the expo Guest Relations booth. 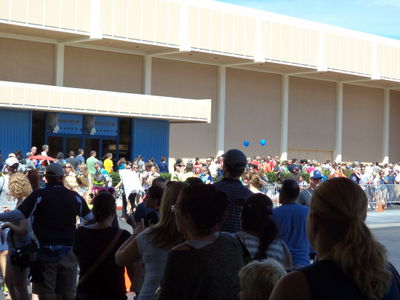 Navigating a packet pickup line can be a marathon unto itself. Photo by Lorree Tachell.

As for selling one's race number, let’s be honest; the new policy won’t completely solve the issue. Those who pick up their packets in person can still walk outside the expo and sell their number, as I observed several times during Tinker Bell Half Marathon Weekend. The new rule may drop the number of sales from out-of-town registrants who didn’t plan on attending the expo in person, but where there is a will, there always seems to be a way.

As you can imagine, this rule change has caused a storm of negative comments from participants in many of the runDisney-focused online forums, but runDisney is only following the policy of other races, such as Competitor’s Rock 'n' Roll events, so expect that the change will be permanent.

We looked in the previous article at how to queue up for races that have no assigned corrals, such as the majority of runDisney 5K races—there is a clock at both the start and finish line, but participants do not receive an official start or finish time. Where one stands at the start of the 5K is on the honor system; you are expected to line up in the corral that most closely matches your estimated finish time. Exceptions are:

Got it? Good. You will be tested later. 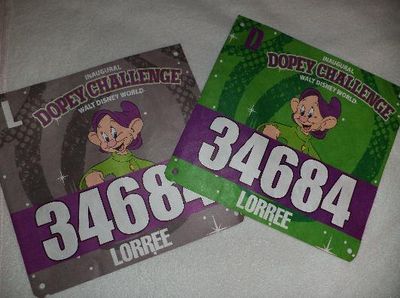 Race etiquette on the course (or "Oh my heavens, it's CAPTAIN JACK SPARROW!")

Half the fun of a Disney race is finding all the characters scattered throughout the course. Bring your camera along, as you will no doubt run across one or two characters that you absolutely must have your photo taken with. Unfortunately, you may find yourself on the opposite side of the road from the character, which can cause all sorts of traffic issues. It’s fairly common for participants, upon sighting their must-have character, to hit the brakes and make a sudden dart from one side of the road to another without checking for other participants coming up right behind them. This can be especially dangerous in the early morning hours when it’s still dark, and visibility is limited. I’ve learned to listen for a loud, "Oh my god, it's [fill in the blank]," which usually precipitates the darting behavior. I have seen runners knocked down by someone racing across the road in a hurry to cuddle up with Captain Jack Sparrow. Ladies, I hate to break it to you, but it's really not Johnny Depp. 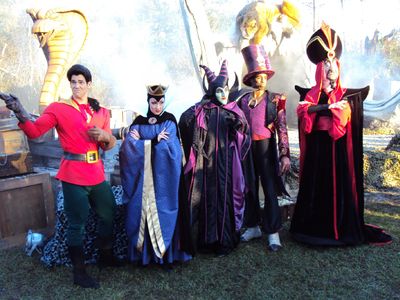 Perhaps a bevy of villians may be your "must have" photo opportunity. Photo from 2013 WDW Marathon Weekend by Lorree Tachell.

Jodi, a member of Team MousePlanet, offered her take on moving from one side of the road to another by comparing it to driving on the freeway. “I look over my shoulder, try to merge, and if I don't make my exit in time, I have to take the next available exit and backtrack (off of the freeway, not into oncoming traffic).” Just make sure you walk on the side of the road out of the line of traffic if you are backtracking. And don’t worry, Captain Jack (or a reasonable facsimile of) will still be there waiting for you.

Merging after a stop

Let’s say you’ve made it through the photo line and obtained your must-have character picture, and are now ready to jump back into the race. Even if you are running the same pace as those going by, this is not the time to just leap into the crowd. As with darting across the road, you can cause serious injury to yourself or to others by jumping in front of a pack of runners. It is extremely dangerous to expect other runners on the road to make way for you and it is very easy to trip someone (or yourself) if you attempt a merge at an inopportune moment. It’s better to take your time, find a break in the crowd, and then quickly merge in. If you cannot keep the current pace or need to move from one side of the road to another, you may have to wait until a larger break presents itself.  Just like on the freeway, use the left side to pass, and stay to the right if you're going slower (remember—"runners on the left, walkers on the right). 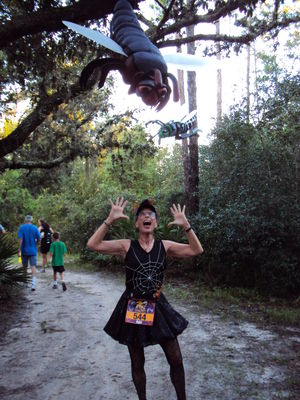 Bad things can happen to runners who don't look before merging onto the course. Photo by Lorree Tachell.

There are instances in runDisney races when, for whatever reason, the sudden urge to stretch seems to overcome race participants. Without warning, they begin to flail their arms like a weird uncle at a wedding reception dancing to "Y.M.C.A." from the Village People. Although this activity may be fun out on a dance floor or during pre-race warm-ups, you can easily injure other race participants if you try this in a crowded course. I have personally been beaned in the nose and punched in the solar plexus by fellow race participants who weren’t paying attention to their surroundings and launched an arm just as I was passing. If you find yourself tightening up and feel the need to stretch, make sure you look behind you to make sure you're clear, pull off to the side of the road, or find space on the course where you can do so without impinging on other runners and walkers. 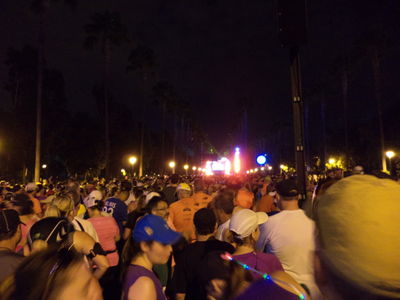 Keep in mind that the course may be a bit crowded. Photo by Lorree Tachell.

The cones are there for a reason

There are instances along the course when you will come across orange safety cones in the road. runDisney did not place them there in celebration of Radiator Springs and the Cozy Cone Motel, or supplied them for Buzz Lightyear to cross the street with. Cones along the course are usually placed to mark areas that race participants should avoid or to separate runners and walkers from spectators. They are not there for you to jump over, run through as an obstacle course, or ignore. While there may be open space on the other side of the cones that looks tempting—especially if you happen to be in a large, congested area of the course—for your own safety’s sake, stay on the correct side of the cones.

Given that the majority of race participants carry their cell phone with them during the race, it’s no longer unusual to see participants calling friends and family to pass the time during slow stretches along the course. Of course, there are those who take it to the extreme, such as the runner trying to take a business call as he ran through the tunnel on the way to the Magic Kingdom in Walt Disney World (he found out quickly that shushing everyone going by him didn't work). If you do make or take a call during a race, keep to the side of the road, watch your pace (it's easy to slow down to a stroll when your focus is not on the race), and please don’t expect thosearound you to provide you with a wall of silence. runDisney races are fun, loud, noisy events with lots of music and entertainment that you paid a lot of money to attend, so frankly, just forget the calls and enjoy the experience.

In the original article, we looked at how to avoid being a photo hog as you cross the finish line. Official race photographers are also out all along the course trying to capture action shots of participants making their way along the race course. If you see an official race photographer, keep moving (or if you’re like me and taking an ill-timed walk break, start running). This is not the time for you and your friends to stop in front of the photographer and start posing—this blocks other race participants from being photographed. Run, jump, walk, smile for the camera but keep moving so others can also have their moments captured, too. 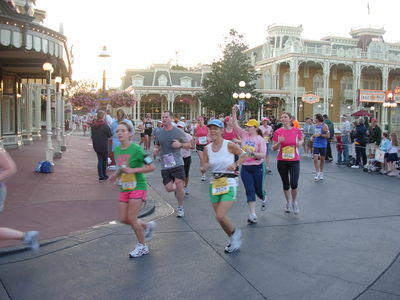 And speaking of pictures, what about taking selfies during a race? Most race directors view selfies as a race distraction similar to headphones and other electronics that keep runners and walkers from paying attention to the course. Stopping without warning for a selfie can cause runner pile-ups, while taking your own pictures instead of paying attention to the road can cause you to trip or run into other runners and/or items along the course like an open gate or a road cone. If you want photos to post on social media, take a selfie at the start of the race before you enter the corrals and then again at the finish. Take another with your race medals in front of the castle. If you absolutely must take a selfie during the race, pull off on the side and off of the course.

And that’s it for this updated addition. Until the next runDisney race, have fun, run safe—and enjoy your runDisney race experience!