Dick Clark famously said, “Music is the soundtrack of our lives.” He was 100% correct. Music has that power. It can take you out of a moment and instantly bring you someplace else. I can hear songs from the 70’s like “Seasons in the Sun” and vividly feel like I’m buckled into the backseat of my parent’s Volvo listening to the tinny sounds of AM radio. Journey’s “Don’t Stop Believing” will always take me right back to my teenage years hanging out by the bonfire at the beach. Will I ever forget that Grateful Dead performance of Fire on the Mountain at the Saratoga Performing Arts Center in 1988, which seemed to be completely in sync with a lightning storm off in the distance? As I wrote that sentence I was taken right back there. It’s a palpable phenomenon that only music can really accomplish.

Just the other night my wife and I were at a meeting up at our daughter’s school. There was a senior citizen concert band rehearsing in the band room next door. About halfway through the meeting I began to hear a familiar melody coming through the walls. I could easily make out the tune and starting singing the words – to myself, of course - “It’s a world of laughter, a world of tears…” At that moment, my wife, Diane picked up on it and so did fellow meeting attendee, Laura, who happens to be our latest and most favorite Disney traveling buddy. A smile came across all of our faces as we were, just for a brief moment, transported out of that meeting and happily dropped back into our trips to the Magic Kingdom.

The same can be said for much of the music in the Disney parks. There are tunes that instantly send me to Main Street U.S.A. in my mind. I can almost smell the popcorn. There are others that make me feel like I’m circling World Showcase looking for the best spot to stop and watch Illuminations. Several years ago, right here on MousePlanet, I documented my favorite Walt Disney World musical moments in a Top 5 article. Today, after that happy moment of musical escape brought on by the Glen Cove Senior Citizen Concert Band, I thought I’d get a little more specific and present my Top 5 Walt Disney World Attraction Songs. 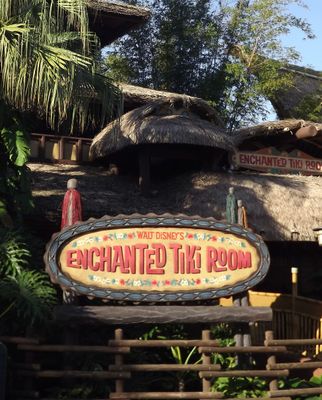 I’ve found myself on more than one occasion with this song from Walt Disney’s Enchanted Tiki Room in my head. I’m not talking about that insipid version from the Under New Management incarnation of the attraction. I’m talking about the original Sherman Brothers tune that has mercifully been reinstated into this quirky Adventureland show. It tends to pop into my head, in of all places, as I’m schussing down the ski slopes. I have no idea why, but I’m well aware that it puts a silly smile on my face. As if my time on the mountain wasn’t happy enough, add in me joyfully singing along, “In the Tiki, Tiki, Tiki, Tiki, Tiki Room,” – once again, to myself, of course – as I careen down the hill on a crisp, cold, sunny Vermont morning. If only the people around me knew what was going through my head! 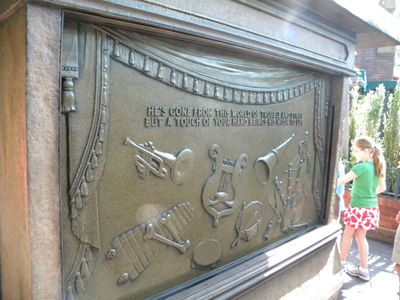 Place your hand over the instruments to create an orchestral rendering of Grim Grinning Ghosts. Play the keys on this musical organ and you get a musical grim grinning surprise. Photo by J. Jeff Kober.

I love the Haunted Mansion. To me, and to many others, it’s perhaps the ultimate Disney dark ride. There’s so much detail and so much to look at that it’s sometimes easy to ignore the song that you hear in various forms throughout the attraction. Once you exit the attic scene and enter the graveyard however, X. Atencio’s words kick in and Grim Grinning Ghosts becomes permanently etched into your brain. 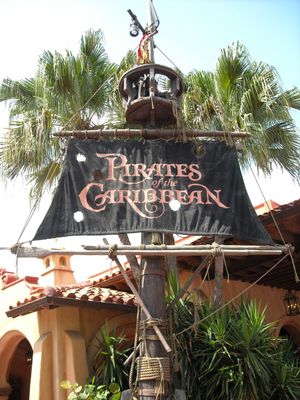 Pirates of the Caribbean at the Magic Kingdom. Photo by Samantha Barry.

“I love this song!” says Jack Sparrow as he dances around on the beach, under the influence of rum and Elizabeth Swan. I can echo Jack’s words, although certainly not as slurred. It’s another classic attraction and another one of those songs that just sticks in your head long after you disembark the boats. 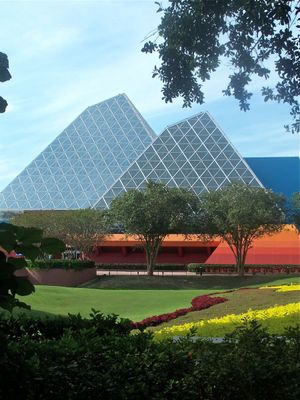 We finally leave the Magic Kingdom for this next entrant in the countdown. Epcot’s Journey Into Imagination with Figment is a family favorite in this house. While many can debate which version is better, and whether or not the Dreamfinder should return to this Future World classic, or whether the whole thing should be completely reimagined, one thing can’t be debated; the positive feeling you’re left with after listening to the catchy Sherman Brothers tune that is featured in the ride. 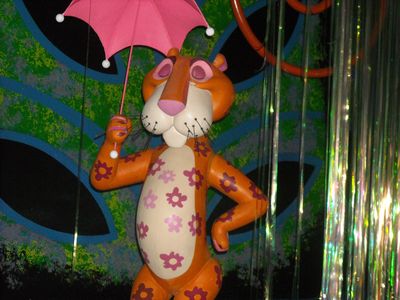 My favorite cat from it's a small world. Photo by Chris Barry.

Ok. Here it is. It’s at the top of my list and I’m not going to apologize. “My name is Chris…and I like the song 'it’s a small world'.” So many people despise this song and I don’t think that’s fair. Here’s the thing. I’m not listening to this song on my iPod, in the car, on the treadmill or really anyplace else. I don’t want Springsteen to cover it the next time I see him in concert. We love the ride. We hear it when we go on the ride…and we love it when we’re on the ride. It just fits.

When I’m at Walt Disney World, I’ve stepped back into a childlike state of innocence and magic. Quite honestly, nothing objectifies that state of being more than a trip on “the happiest cruise that ever sailed.” People say it’s sappy. I prefer to call it hopeful. They say it’s hokey. I’d rather call it timeless. Walt believed in this attraction and I like to think he believed in the song as well. So do I. When I think of Walt Disney World and what it means at its very core…I think of “it’s a small world.” And that’s why it’s my number one attraction song.

So, now that I’ve taken that brave step, let’s open up the comments and see if I take a beating for putting the song that everyone loves to hate at the top slot on my list. We’re all entitled to our own soundtrack in life and I stand by my selections.

How about you? Click on the link below; let me hear your thoughts and I’ll see you next time with another Disney Top 5.