Welcome back to another edition of Remembering the Magic. In this edition, we will take a look back at the history of DINOSAUR at Disney’s Animal Kingdom.

Opening with Disney’s Animal Kingdom, Countdown to Extinction was a roughly 3-minute intense dark ride on a computerized ride vehicle, called an EMV (Enhanced Motion Vehicle). The “time rovers,” which served as the vehicles for the ride, were named CTX Time Rovers for the ride, with CTX being an abbreviation or reference for Countdown to Extinction. The CTX Time Rovers are EMVs which simulate various different motions, such as bumpy terrain, uphill/downhill, loss of traction, and other motion that would be typical of a vehicle going over rough, unpaved terrain. The simulation takes place so that the top half of the vehicle (where the riders sit) moves, while the bottom half (the wheels and frame of the vehicle) does not. When you feel as if you are going over bumpy terrain, you really are not. The floor inside of the show building is actually very smooth; it is the motion simulation of the vehicle.

The ride takes place inside of the Dino Institute in DinoLand U.S.A. As Guests arrive at the show building (the Dino Institute), they see a statue of a Styracosaurus (relative of a Triceratops) on a platform with shallow water underneath and greenery surrounding it. Riders make their way to the entrance, which has Fastpass distribution machines on the right, and Fastpass return/rider entrance to the left of the Fastpass distribution area, and both are on the right side of the building (when facing it). As riders enter the building, they make their way into the preshow queue area, where there is a giant Carnotaurus skeleton (real). You can hear Bill Nye with some background narration. There are dinosaur murals near the ceiling, fossil imprints around the walls below that, and other decor. Near the back of the room is a Cast Member and a dividing point where the Cast Member will point your group to the right or to the left into one of the pre-show rooms. 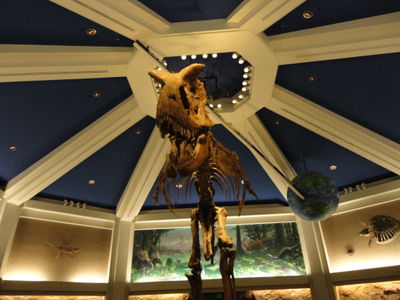 Carnotaurus skeleton in the Dino-Institute. Photo by Jonathan Heigl.

Once in the pre-show room, riders stand and view a short film to set the story for the ride. Riders are first introduced to Dr. Marsh (Phylicia Rashād), and she proceeds to tell the riders that they will be boarding the Time Rovers and going back to the “age of the dinosaurs” for a nice tour. She then says that they will be seeing the Control Center where they will get the safety briefing, and then on to the tour where they will see that the “future is truly in the past”. Breaking in to the video feed is Dr. Seeker (Wallace Langham), a rogue scientist in the institute wanting to perform a mission of his own; send the riders back to the late Cretaceous period and bring back a dinosaur he previously tagged on an “unauthorized field trip.” Dr. Marsh comes into the room when Dr. Seeker mentions the late Cretaceous time frame and they argue that it is the wrong time as it is dangerously close to the asteroid event that wiped out the dinosaurs. After showing Dr. Marsh that the time coordinates programmed into the Time Rovers are securely locked, she is satisfied and leaves the room. Once she does, he hacks into them and changes the time coordinates to the period right before the asteroid event. He reassures riders they will be back before the event occurs and will be safe. Once the video is over, riders are sent through the doors into the loading area.

Upon entering the loading area, riders must go down a few flights of stairs. The area looks like a typical underground loading area might, with different piping systems winding throughout, various overhead doors, crates, etc. Some of the pipes can be seen with chemical formulas on them (those formulas are actually for ketchup, mustard, and mayonnaise). Once riders get to the loading dock, they are greeted by a Cast Member and sent into a row number waiting to load the next available Time Rover.

Once aboard the Time Rover, riders begin their trip back to the late Cretaceous period. The Time Rover drives around the corner and into the tunnel where the time warp begins. After lights flash and the rover moves up and down, the lights turn off to reveal a star field for a brief second or two. After, the riders are placed into a prehistoric jungle. At first, the Time Rover drives through the jungle without any issue while looking for the tagged iguanodon. The first dinosaur riders come across is a styracosaurus. It is looking directly at the riders, but is an herbivore, so there is no need to worry. On the Time Rover’s sound system, the computer warns that the meteor shower is in range. The next dinosaur riders go by, in the distance, is the alioramus, which has a smaller dinosaur in its mouth. An adult hadrosaur watching over its babies is next. On the other side, a raptor is standing on the ledge.

As the Time Rover continues searching, there is a sudden, loud noise. Dr. Seeker asks “What was that?” and then the computer says it is losing signal. Shortly after Seeker regains the signal, and the computer reads “Carnotaurus” as lights flash on and off on the large dinosaur (similar to a T-Rex) who is standing right next to the Time Rover, roaring and snapping. Seeker says “Hold on! I’m getting you out of there!” and the Time Rover takes off on a crazy, high speed trip. Footsteps of the carnotaurus can be heard following for a short time. 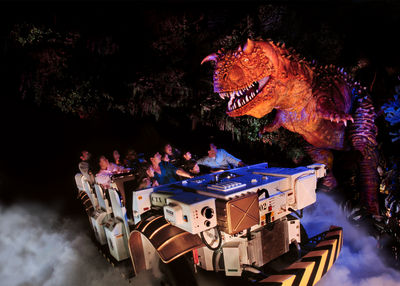 Just before exit, the vehicles come across the iguanodon, which is identified by the computer. A laser net shows on it and Seeker yells out, “That’s our dino! We got him!” The computer calls out “Asteroid impact in 3…2…1…” and an asteroid is shown coming down right in front of the Time Rover as everything goes dark and electric noises are heard. Then, the Return Time Travel chamber lights up. Seeker says “Good work team! You made it back, and so did our dino.” The Time Rover pulls back to the unload bay and the riders disembark.

Since the ride originally opened, there have been some adjustments made to the ride and effects. The first time warp tunnel (where the Time Rover is “sent back into the past”) no longer uses the lasers and pyro effects. The compsognathus that jumped over the Time Rover were on a chain and pulley system. This was deactivated and now they are only illuminated. A lot of the audio effects were tamed down, especially the chase with the carnotaurus. This was done as a lot of Guests were saying the ride was simply too frightening for children (and maybe themselves too!). The laser net was no longer used and the asteroid that is coming right at the Time Rover at the end is no longer in place; it was changed to a carnotaurus.

On May 1st, 2000, the ride changed its name and signs to DINOSAUR to coincide with the movie release of the same name, although the movie is nowhere near as “terrifying and intense” as the ride. The statue of the dinosaur in front of the Dino Institute was changed to Aladar, the iguanodon in the film. On the ride itself, the dinosaurs remain from the original, but the narration has some additions and deletions. The narration was altered slightly to add sensitivity feel, as well as add more drama to the ride; the previous narration didn’t have as much urgency and intensity as the narration for DINOSAUR does. For example, when the computer says the asteroid impact is in 90 seconds, Seeker says, with a bit of stubbornness and worry in his voice, “We can’t stop now!”

After the last encounter with the carnotaurus, Seeker finally says “That’s it. Abort mission.” As the Time Rover begins to make its way out, it comes across the iguanodon and Seeker says, “Forget it. Get them out now.” After the computer calls out the asteroid impact is happening, Seeker says, “They’re not gonna make it. They’re not gonna make it.” All of these changes add drama and intensity to the original, even though the original was toned down previously.

I am actually a big fan of DINOSAUR and enjoy the seemingly increased intensity as compared to Countdown to Extinction. I think it is really cool how most of the effects of the ride are simulated by the ride vehicle itself, meaning the bouncing up and down, the bumps, the rough terrain, the loss of traction, and so on. I love dinosaurs and I love the effects in the current version. I would definitely not revert the ride itself, but I would prefer the name return to Countdown to Extinction, or something along those lines. DINOSAUR just isn’t a great name of a ride in my opinion. Personally, the ride hasn’t grown stale on me yet, so I wouldn’t vote for re-imagine either, nor would I go with update since I don’t feel it is outdated (except for the name of the ride). I would vote for leave it alone.