Welcome back to another Disney Stuff.

I ended an era in my house recently. We’ve been trying desperately to clear out the old and de-clutter our home. The closets and storage areas have been gone through. Books have been taken off the shelves. Toys have been donated. The jeans that are never going to fit again have been bagged up and put in the donation bin. And, after many years of resisting, I’ve finally just about rid the house of VHS tapes. Remember VHS? Of course you do. It was a staple of home entertainment for a long, long time.

I carefully screened through the piles of tapes that I never watch and will probably never watch again. If I thought I could really, truly never find it on DVD or online, then it was spared and there were only a few like that. The footage of my parent’s old home movies that were transferred to videotape years ago were burned to DVD for posterity as were the early tapes of my daughter as a baby that I actually recorded on a VHS camera. We are, for all intents and purposes, a VHS free house, at long last.

However, when it comes to my passion for collecting Disney stuff, the one stack of VHS tapes that I just can’t get rid of is the stack of classic Walt Disney Masterpiece Collection tapes, frequently referred to as “clamshell” tapes. There’s just something about these old tapes that I just don’t feel like parting with. I don’t watch them, but I enjoy having a shelf full of them in my basement. They remind me of the days when getting a Disney movie at home was a big deal. You waited for these releases to arrive on store shelves, some for the first time, finally offering you the ability to watch these classics in the comfort of your easy chair.

So, it’s a funny coincidence that I was walking through a recent comic convention in New York City last month and I came across an entire box of these Disney McDonald’s Happy Meal Toys that celebrated those legendary Disney clamshell boxes that I can’t get rid of. I, of course, had to have a bunch of them. 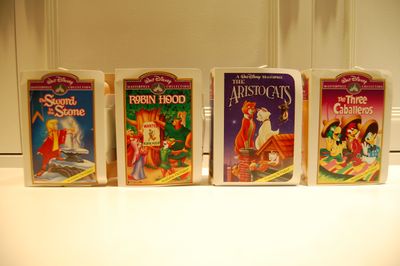 My set of Happy Meal clamshells. Photo by Chris Barry.

At $1.00 a box could I really pass them up? It was all I could do not to buy the whole lot of them, because inside each little clamshell is a classic Disney figurine. I’m a sucker for an action figure or a PVC figure, especially when it represents one of my favorite Disney films.

These boxes were released at McDonald’s in 1995. At that time, I had no kids and certainly wasn’t all that aware of what the latest Happy Meal toys were. What that means is that I missed these collectibles in their original release and have only recently discovered them. What a cool discovery it was. The small boxes replicate the VHS covers exactly. They’re like miniature versions of the clamshells with the added bonus of a cool figure inside.

That day at WinterCon, I only bought 4 of them. I found them later on in the day after walking through the convention for a few hours and had just about no more room to carry anything else out with me. I feel like I chose wisely and only took the four that I liked best. That said though, I am on the hunt to complete the set, but let’s take a closer look at these 4.

The Three Caballeros has always been a favorite of mine and while I really would have liked one of the lesser-known birds in the box, it was no surprise that the big star, Donald Duck was the figure included. 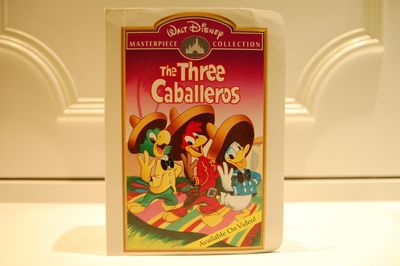 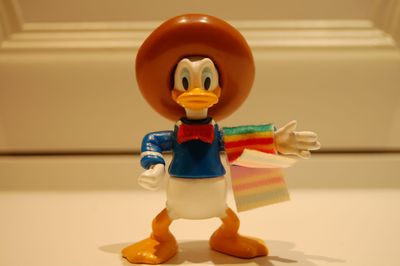 Donald Duck in his Mexican garb. Photo by Chris Barry.

However, I was quite surprised that in the Aristocats box, the big star was not included. I was totally expecting a Thomas O’Malley figure but was thrilled to find Scat Cat, voiced by the legendary Scatman Crothers in the film, instead. When was the last time you saw a Scat Cat toy? 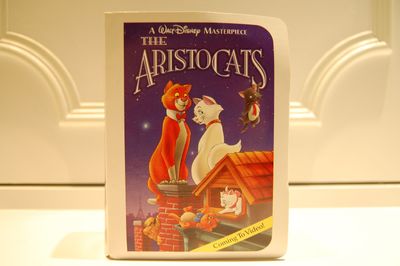 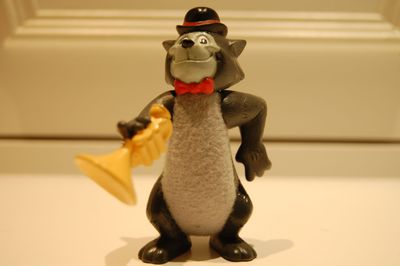 Everybody wants to be a cat. Photo by Chris Barry.

Robin Hood, however, was a perfect choice for me. I know some Disney fans malign this film, but Robin Hood reminds me of my childhood and Robin, himself, has always been one of my favorite unsung Disney characters. I was pretty happy he was in the box. 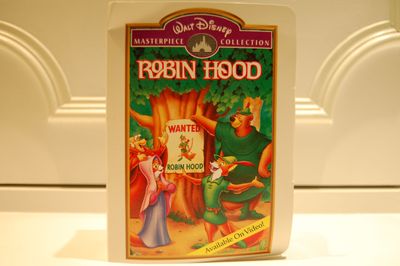 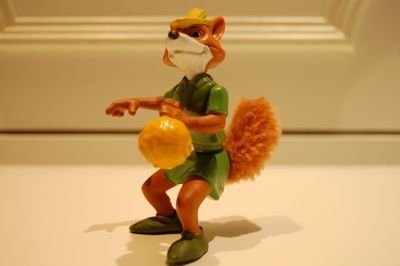 Robin Hood ready to give to the poor. Photo by Chris Barry.

Another of my childhood favorites was Sword in the Stone. Who better to represent this Disney classic than the one and only Merlin? 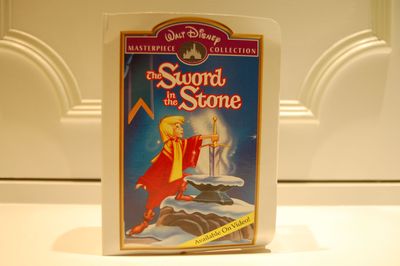 The Sword in the Stone Happy Meal clamshell. Photo by Chris Barry. 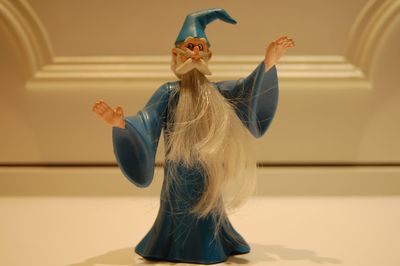 It should be noted that these are quality figures. Fast food toys are typically rather cheaply made and aren’t all that detailed. The Disney toys were usually a better quality to begin with. This collection takes it up a notch. They are made out of PVC. The arms and heads are poseable, which is unusual for a fast food toy. One definite difference is that each figure has something fabric. Donald’s Mexican blanket is cloth. Robin Hood’s tail is soft and fluffy. Scat Cat’s belly is fuzzy and Merlin’s beard is hair as opposed to being painted on. It’s a nice extra and sets them apart from other collectible figures.

In addition to the ones I have shown here, the following boxes and figures were released in 1995/1996.

All of these collectibles are readily available on eBay and on other secondary market sites. I got a great buy at $1 a box, but they are certainly an affordable little collectible if you want one or more than one. Me? I think I might buy a few more to add to this small collection. The figures are unique and well made. The boxes sit on my collectible shelf and remind me that down in the basement, next to my Grateful Dead bootleg audiocassettes and my bins of vinyl records are a stack of Disney clamshell VHS tapes that I cling to. They’re a reminder of yet another dead entertainment format that I have watched come and go. The vinyl is staying. The bootlegs are slowly getting digitized. What’s the fate for the clamshells?

Only time will tell, but I’m sure I’ll hold onto these little versions for a long time to come.

That’s all for this time around. As usual I’d like to hear what you have to say. Click on the link below and let me hear your thoughts on these collectibles and the original clamshells that they honor and I’ll see you next time with more of that great Disney Stuff.