If historical price increases timelines remain constant, the price increase could happen has soon as the end of this month based on reports from a report from the Tampa Bay Times and other Internet sources. The new reported price for a single-day ticket for Magic Kingdom will likely be $105, which is $6 more than the current price of $99 and which brings the entry price above the $100 mark for the first time in history. Walt Disney World would likely set the admission price of its other three theme parks to $99 for a single-day ticket, a $4 increase from 2014.

It is unclear how or whether crossing the $100 level would impact park attendance. Even at $99 last year, Walt Disney World saw crowd levels continue to rise. If the reports are accurate, the new $105 single-day ticket price means admission to the Magic Kingdom has doubled since 2003.

Disney announced the upcoming closure of the Richard Petty Driving Experience in the Magic Kingdom parking lot in June. 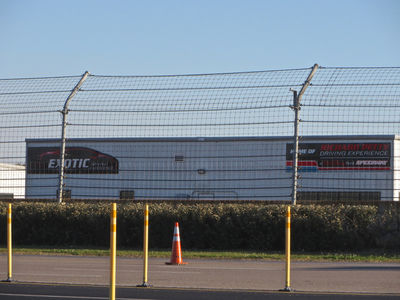 Also known as the Walt Disney World Speedway, the racing track hosted visitors looking to live their speed-demon dreams as they either experienced a ride-along in a NASCAR or exotic car (such as Lamborghinis and Ferraris) or the chance to get behind the driver's wheel.

According Rikki Niblett of our sponsor TouringPlans.com, the closure comes as a result of upcoming transportation improvements in the area. Disney, however, has not confirmed the specifics of the project.

"Any reserved guests prior to July 1 will have the same fantastic experience that we have delivered since 1997 at Walt Disney World Speedway," said Bill Scott, Vice President of Petty Holdings.

Scott added that anyone with reservations beyond June 30 for either the Richard Petty Driving Experience or Exotic Driving Experience can call (800) 237-3889 to reschedule the session at any of the other 14 Petty locations around the county, including the Daytona International Speedway. A new Orlando location is in the planning stages and will feature exotic and stock car programs.

Disney Cruise Lines announced the introduction of Star Wars Day at Sea for select dates in early 2016 on board the Disney Fantasy cruise ship.

The special, themed cruises are announced for sailings that depart January 9 and 23, February 6 and 20, March 5 and 19 and April 2 and 16, 2016. Each of these sailings leave from Port Canaveral, Florida and have a seven-night itinerary to the Western Caribbean and includes a stop at Castaway Cay, Disney's private island in the Bahamas.

The day-long, at-sea celebration happens once during each of the eight special sailings on board the Disney Fantasy and provides passengers a chance to meet and greet favorite Star Wars characters, and enjoy a deck party, themed youth activities, food and drink, and exclusive merchandise. The Disney Fantasy is also featuring screenings of the Star Wars films and the new Disney XD series Star Wars Rebels.

A Houston, Texas family including a mother, father and three young children continue a walk they started last August from Disneyland to Walt Disney World to honor a young family member who lost a battle with cancer.

Last year, 8-year-old Julia Cobb passed away from Ewing's Sarcoma, a rare form of bone cancer. Not long before Julia passed away, the entire Cobb family, including dad Jonathan Cobb, his wife Jennifer and their kids, Julia, Jonathan, Jenna and Jaxie took a trip to Walt Disney World courtesy of the Make a Wish Foundation, according to MyFoxOrlando.com. The family had the "best week of our lives" mom Jennifer said.

Sadly, before the family could even get back to the airport to return home from the trip, Julia became critically ill and went to the hospital. Within 24 hours, she passed away.

To help cope with their loss and as a way to raise awareness of the disease, the grief stricken Cobbs decided to walk from the California theme park to the Florida theme park. They have a chase vehicle where one parent will drive and carry the kids who are tired, while the other parent continues to walk with the others. The family averages about 25 miles a day and stay in donated hotel rooms.

The Cobbs have created a foundation named for their daughter. The Jucan Foundation provides details about their Walk Across America campaign. In addition to offering support in spirit by using their #teamjucan hash tag in social media, their website also details ways in which people can help.

The Cobb family hopes to reach Walt Disney World by late May or early June.

In honor of the upcoming release of the live-action Cinderella movie on March 13, Disney is offering a special sweepstakes with a grand prize that gives one lucky family a taste of what "happily ever after" is about.

Entries can be submitted online through the sweepstakes' official webpage until March 29, 2015.

Walt Disney World Resort Hotels recently added a new feature to their celebration packages for guests looking to add a boost for a special occasion: cake! Previously, only candy cakes could be delivered to resort rooms, but now anyone staying on property can enjoy a vanilla or chocolate cake with a special occasion package.

From traditional cakes to large gift packages, Disney's Floral and Gifts now can deliver the party right to your on-site resort room. Among the newest celebration package additions are:

To place an order, visit the Disney Floral and Gifts website.

Our photographers snapped some fantastic photos of lots of activity around Walt Disney World—from major progress in the Magic Kingdom and Disney's Polynesian Village Resort to a magical addition over at Disney's Hollywood Studios and even some natural beauty around the parks. 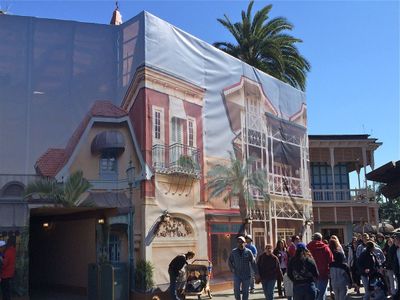 Renovation to the front of the Adventureland Veranda is in play as permits have been extended to remodel the food and beverage facilities, believed to be themed to former Jungle Cruise skippers starting their own restaurant business. Photo by J. Jeff Kober. 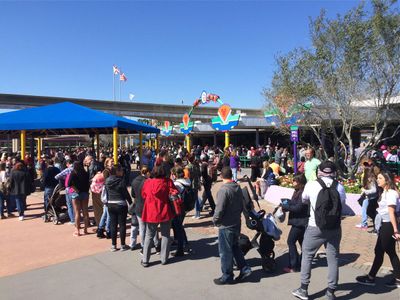 Crowds like this lining up for tickets are not uncommon on mornings at the Transportation and Ticket Center. But on President's Day weekend, this is how far the crowds extended well into the afternoon. Photo by J. Jeff Kober. 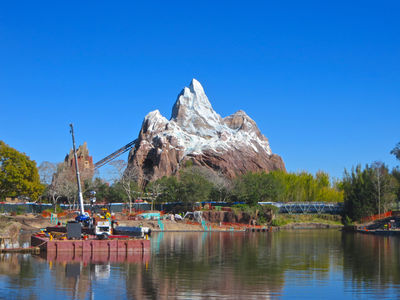 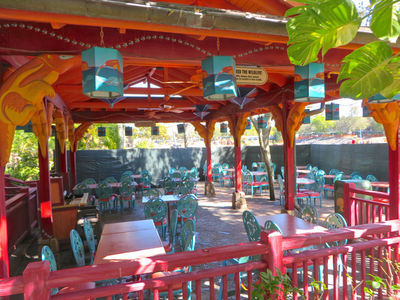 Although the FlameTree BBQ counter service restaurant has temporarily closed during construction of the "Rivers of Light" nighttime spectacular at Disney's Animal Kingdom, much of its seating area was still open this past week. Photo by Alan S. Dalinka. 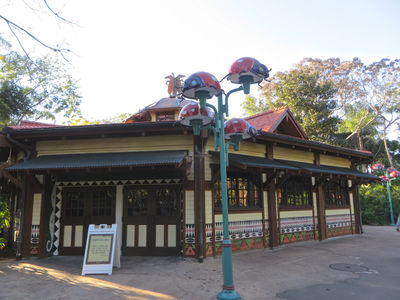 There are no exterior signs of construction going on within the presumed future location of Starbucks inside Disney's Animal Kingdom. Photo by Alan S. Dalinka. While the tip of the hat came down quickly, the base structure of the sorcerer's hat requires more effort to remove. What is clear is that the Chinese Theater is again becoming more visible. Photo by J. Jeff Kober. 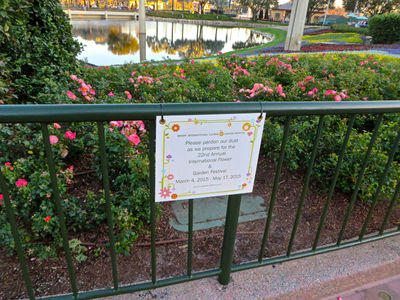 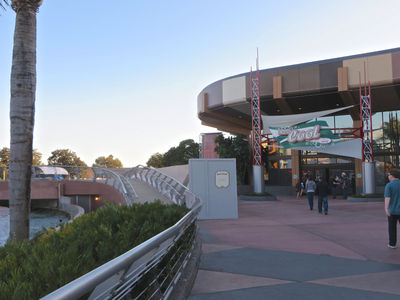 Epcot's parking lot provides a spectacular view of Spaceship Earth and the finale of the nighttime Illuminations: Reflections of Earth fireworks. Photo by Alan S. Dalinka. 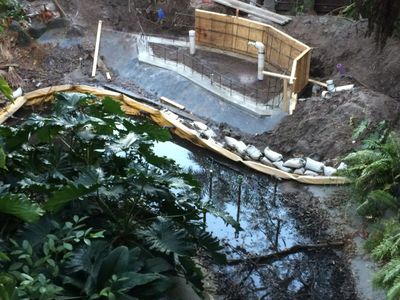 A new water feature is being added to the entrance to the Great Ceremonial House. Photo by J. Jeff Kober. It is still difficult to determine whether this playground structure will be wet or dry. Photo by J. Jeff Kober. A different view of the volcano reconstruction being done to the pool area at Disney's Polynesian Village Resort. Photo by J. Jeff Kober. The causeway has finally opened at Disney Springs, in time for President's Day weekend. Photo by J. Jeff Kober. This logo has appeared in poster form around the construction area, but now it appears as a medallion here on the causeway. It also now includes a tag line, "The Source of Inspiration." Photo by J. Jeff Kober. This is not necessarily "the source of inspiration" but it is the source of what will be the springs for Disney Springs, still well under construction. Photo by J. Jeff Kober. The back half of Midtown Jewelry on Main Street U.S.A. has been completely remodeled to house a new selection of Pandora product. Pandora is also the new sponsor of Wishes fireworks. Photo by J. Jeff Kober.

...Looking for some great shows for preschoolers in the Walt Disney World Parks? Disney Parks Blog published a post featuring some of the best live shows for the littlest travelers.

...Take a look at some of the cool new merchandise for the upcoming Disney Princess Half Marathon weekend which runs from February 19-22. It looks like the runners are getting the royal treatment with this year's designs and items.