In a true sign of spring being just around the corner, the 2015 Epcot International Flower and Garden Festival opens this Wednesday, March 4 and runs through Sunday, May 17.

Here's what you can expect for Week #1 of the 2015 Epcot International Flower and Garden Festival:

Party fans, get out your calendars.

Disney released the dates for the 2015 Mickey's Not So Scary Halloween Party and Mickey's Very Merry Christmas Party at the Magic Kingdom last week.

These annual, hard-ticket events invite visitors of all ages to celebrate these holidays in a variety of magical ways, from dressing up in costume and trick-or-treating around the Magic Kingdom during the Halloween party to enjoying cookies, cocoa, live shows and so much more during the Christmas party.

The Magic Kingdom hosts Mickey's Not So Scary Halloween Party for 25 evenings from September to November:

Based on this schedule, Disney decided to start the party about two weeks later this year compared to the premiere night of September 1 in 2014. This year's schedule also has one fewer day than last year.

Then, in November and December, the Magic Kingdom welcomes Mickey's Very Merry Christmas Party for 20 nights:

Anyone looking to travel to Magic Kingdom during these months should keep these dates in mind, as the park closes at 7:00 p.m. on scheduled party days. Visitors may want to plan their park days accordingly.

Pirates of the Caribbean scheduled for lengthy refurbishment through the summer

Disney announced last week that one of the Magic Kingdom's most popular attractions, Pirates of the Caribbean, will be closed all summer due to a major refurbishment project.

The project, which Disney scheduled for May 11 through September 25, focuses on a number of items that need attention. MousePlanet fans may recall reading about two accidents with injuries reported at Pirates of the Caribbean in 2014. Recent visitors also report numerous closures of the ride and claim there are issues with the pirate Audio-Animatronics not working properly, as well as other potential issues with the boats on the attraction.

We plan to let you know about the specific areas addressed in this refurbishment project as we learn about them.

Visitors scheduled to visit at this time should be aware that this closure could affect wait times at other major attractions in the Magic Kingdom.

Workers are wrapping up the first phase lengthy construction project in and around the Magic Kingdom hub in front of Cinderella Castle. The Central Plaza area between Main Street U.S.A and Cinderella Castle opened, adding gardens, new pathways and expanded restaurant seating. 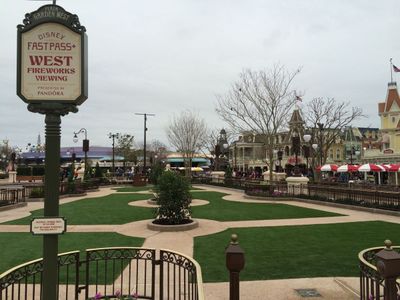 The new Central Plaza park has opened along with signage indicating that it's dedicated at night to Fastpass+ viewing. Notes the sponsorship as well with Pandora. Photo by J. Jeff Kober.

A new Fastpass+ viewing section for the fireworks and parade relocated to the Main Street Plaza Gardens, which is adjacent to The Crystal Palace, according to a post on Disney Parks Blog.

To make Fastpass+ reservations, visit the My Disney Experience website. 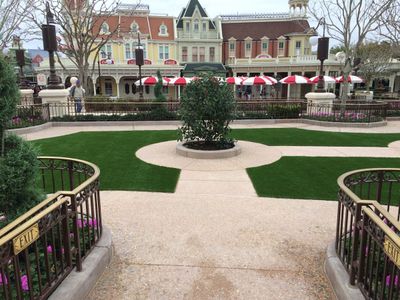 A view of that same west side park facing back toward Main Street U.S.A. Note the exit signs for the fireworks viewing. Photo by J. Jeff Kober.

The WonderGround Gallery in Downtown Disney's Marketplace Co-Op is expanded starting in March, according to a post on Disney Parks Blog.

The gallery, which hosts its grand opening on March 6 and 7, features drawings, limited edition photographs, signs, and other valuable pieces of art. Many of the original pieces in the gallery came from the Downtown Disney District in California.

The MarketPlace Co-Op offers a unique experience for visitors, as the space is often used for new retail space and and experimenting with store concepts before they hit the general public.

The Walt Disney World Swan and Dolphin Hotel has a 40 percent discount for visitors who book a stay between March 4 and May 17, 2015.

These dates make up the 2015 Epcot International Flower and Garden Festival, and the hotel decided to provide an extra incentive for anyone wanting to come down to enjoy the annual festival.

According to a report from the Orlando Sentinel, the Swan and Dolphin also plans to offer Easter activities for guests during April 1 and 8, 2015. Some of these activities include egg hunts, races, meet-and-greets with favorite characters and more.

For more information on rates and how to book a trip, visit the Swan and Dolphin official website.

Between March 27 and April 25, 2015, Epcot visitors have the chance to participate in a Egg-stravaganza filled with special hidden eggs around World Showcase.

Visitors can pick up a map and stickers for $4.95 per tax at either Heritage Manor Gifts at the American Adventure Pavilion, Pin Central, Plaza Towers (Port of Entry) and World Traveler (International Gateway). These maps help egg hunters make their way around the park to find the elusive colorful eggs. Once an egg is found, the hunter places a sticker in the appropriate pace. Once the map is complete, the hunter can return to pick up a special prize.

Even those who do not purchase a special map and stickers can still participate in the Egg-stravanza and return an incomplete map to redeem a prize. Participants must claims his or her prizes by April 30, 2015.

More shots from our photographers showing some of the new viewing areas around the Magic Kingdom and Disney's Hollywood Studios courtesy of months of hard work by construction workers. 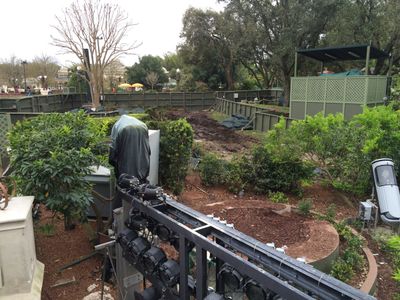 From the walkway leading to Cinderella Castle, one can see the construction underway on both sides. Here, old Victorian-style ramada are being removed, and new castle turrets are being installed to house audio/video support for the castle shows. Photo by J. Jeff Kober. 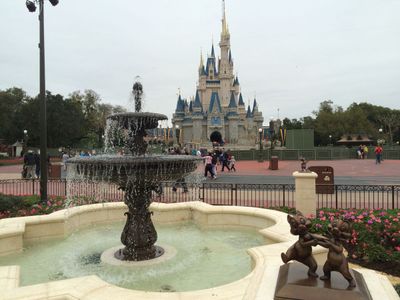 The fountains are quickly becoming a popular spot to take a photo in front of the castle, especially given construction closer in. Note that the statues of Disney characters such as Chip 'n' Dale surround the fountains. They used to be closer in to the Partner's statue of Mickey and Walt. Photo by J. Jeff Kober. 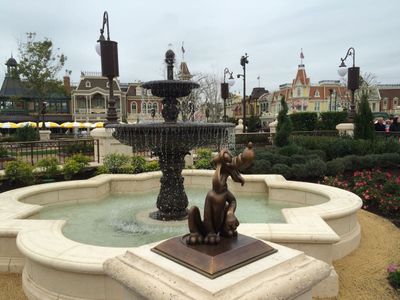 Another shot of the fountain on the east side, this time with Pluto. The east side is opening up shortly. It is fairly identical to the west side park. Photo by J. Jeff Kober. 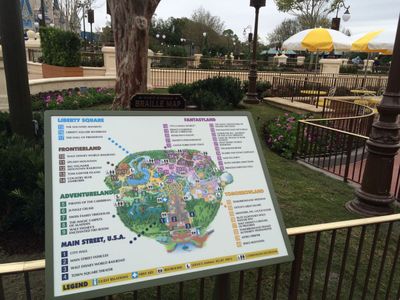 The braille map has been replaced, but this time on the right side of the street entering the park. What is noticeably missing is the tip board that used to be across from Casey's on the left side. With the online additional helps of MyMagic+, it is possible that the tip board will not return. Photo by J. Jeff Kober. 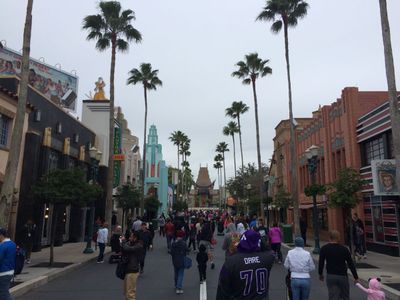 An old familiar site has returned to the end of Hollywood Boulevard, now that the Sorcerer hat has been removed. Photo by J. Jeff Kober. 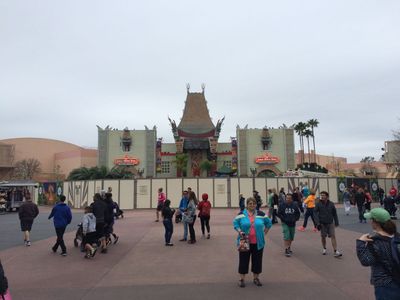 Closer up the Chinese Theater seems sort of barren. The original design had a low Mickey-nose planter in front with tall palms flanking the theater on both sides, sort of framing in the view. Photo by J. Jeff Kober. 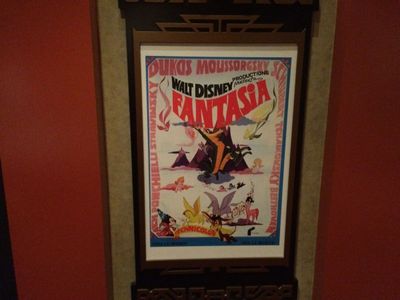 Inside The Great Movie Ride, new marquee posters line along the interior queue right before the theater queue. Here we see a poster showcasing Fantasia. Photo by J. Jeff Kober. 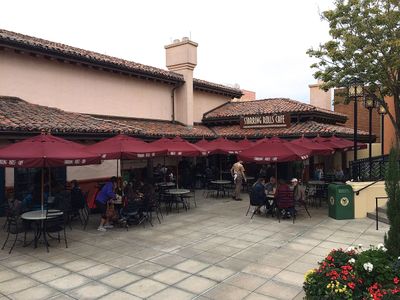 Fans of Starring Rolls will be happy to know that this corner spot in the park did not go away when the larger Starbucks opened across the street. And, there's a place to sit and enjoy your refreshments, no matter which eatery you bought it at. Photo by J. Jeff Kober. 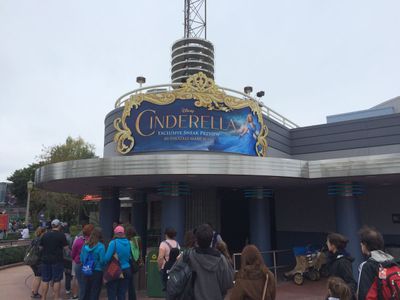 ...Disney announced Bob Chapek would become the chairman of Walt Disney Parks and Resorts, taking the place of Tom Staggs, who was recently named chief operating officer of the Walt Disney Company. According to a report from Variety, Chapek has been with Walt Disney World for more than 27 years, including serving as president of Disney Consumer products since 2011.

...Disney released a new video about the changes coming to Disney's Animal Kingdom with the AVATAR construction.

...On Friday, March 6 from 6:00 to 10:00 a.m. the public is invited to join the 15th anniversary celebration of The "Mike and MIke" show festivities at the Waterside Stage at Downtown Disney Marketplace. The “Mike & Mike” show airs nationally on ESPN2, ESPN Radio and ESPNRadio.com and features Mike Greenberg and Mike Golic giving the daily rundown of the top sports news.

... Disney Cruise Line received 12 first-place designations from The Cruise Critic Cruisers’ Choice Awards last week. Awards are given based on the personal experiences of cruisers who sailed in 2014. All four Disney ships received recognition in categories such as Best Overall, Best for Families, Best Service and Best Entertainment. Thanks to Disney Parks Blog for sharing the news!

Entries can be submitted online through the sweepstakes' official webpage until March 29.