One of the highlights of the Disneyland 60th anniversary celebration is "Disneyland Forever," a new fireworks show designed by Steve Davison (he with the impressively long title, "Lead Creative Executive of Parades and Spectaculars for Walt Disney Creative Entertainment"). Earlier this week, Davison gave one of his famous live presentations about the new show for a group of media, providing some brand-new details about this much-anticipated show.

In many ways, labeling Disneyland Forever as a fireworks show ignores the other technology used in the show, the lasers and projectors, water screens and bubble blowers, snow makers, and inflatable dancers. In talking with Davison, though, one gets the sense that he may be OK with that oversimplification. He says that he never wants visitors to see behind the curtain, to be thinking about the infrastructure of the show.

Davison also said that Disneyland Forever wasn't designed in an effort to top his previous shows, which include the incredibly popular "Believe..." and "Wishes." Instead, he says his creative focus was immersing the viewer in the story, and bringing it to life in new ways.

The show is described as it would be seen from a hypothetical area in the middle of Main Street USA with a perfect view of both Sleeping Beauty Castle and the Matterhorn.

The show goes right for the nostalgia factor in the opening scene, as projectors transform the buildings of Main Street into an Anaheim orange grove, circa 1950. Viewers might get the sense that they're standing with Walt Disney in the time before Disneyland, as his voice fills the air.

As the music swells, the oranges grow and burst into clouds of pixie dust. An animated Peter Pan that is projected onto Sleeping Beauty Castle interacts with a live action Tinker Bell as she flies over the castle to collect the pixie dust.

Projectors turn Main Street into the rooftops of London, and a new voice recording by Mary Poppins star Dick Van Dyke leads into "Step in Time" and "Let's Go Fly a Kite" from the movie. This scene winds down with "At Last I See the Light" from Tangled, as hundreds of projected lanterns "float" into the sky. Davison said that most people have never attended a lantern festival in person, and he wanted to create that experience for them.

Winnie the Pooh and friends star in this sequence. Main Street is transformed into a giant honeycomb for "Rumbly in my Tumbly" before melting away into the psychedelic "Heffalumps and Woozles" scene. 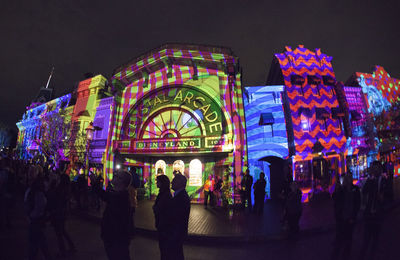 The call of "Nants Ingonyama!" sparks a pyrotechnic sunrise behind Sleeping Beauty Castle, as the animals of the Pride Lands march in stylized silhouette down Main Street to "Circle of Life" from The Lion King. The savannah makes way for Cambodia's Temple of Angkor Wat for "I Wanna Be Like You" from The Jungle Book. A storm, complete with lightning effects and a digital waterfall, provides the transition to the next scene.

Davison admits that he's included "Under the Sea" from the Little Mermaid in other shows, including the World of Color, but says that the audience has never seen it like this. Giant inflatable figures atop the buildings on Main Street come to life during this sequence, which also includes projection and bubble effects. 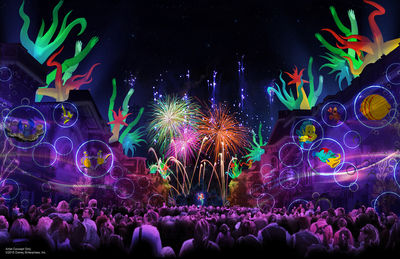 Bubble effects, inflatable figures and projected animation are used during the "Under the Sea" section of the Disneyland Forever fireworks. Photo © Disney.

The Matterhorn takes center stage during the next two acts, first transforming into Mt. Wannahockaloogie from Finding Nemo. With an animated Tank Gang looking on from Sleeping Beauty Castle, a figure of Nemo "swims" between the castle and the Matterhorn, and through the ring of fire for his initiation as the volcano appears to erupt. Davison calls this his favorite scene from the new show.

The ash from the volcano turns into snow flurries on Main Street, and the Matterhorn transforms into Elsa's Snow Palace for "Let it Go" from Frozen. Davison says the pyrotechnics during this sequence serve as a first finale. 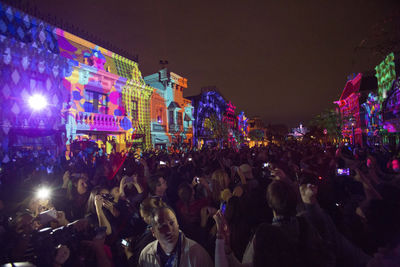 Tinker Bell and Peter Pan bring viewers back to the orange grove with a remix of "When You Wish Upon a Star." Peter Pan signs off by saying "Wow, just think—Disneyland is yours forever," launching the spectacular finale, which incorporates a bank of 100 LED searchlights all around Disneyland. Davison jokes that alien ships will likely be attracted by all the light.

While there's no denying that you'll have a great view of Disneyland Forever from Main Street—or perhaps from the International Space Station—there seems to be no single perfect spot from which to watch the show. Get too close to Sleeping Beauty Castle, and you'll miss the projected magic on Main Street. Catch the show from "it's a small world," and you won't see the Matterhorn effects. Davison says the show is deliberately designed to encourage people to explore different vantage points for repeating viewing.

The water screens of Fantasmic and the "it's a small world" facade will be used as projection surfaces during the show, with different animation than you may find on Main Street. This is honestly good news for annual passholders and day guests alike, as it will help spread the crowd beyond Main Street.

Disneyland Forever debuts on Friday, May 22, and there are no previews announced as of press time.