Haunted Mansion: Hatbox Ghost in, original pet cemetery out | Frozen Fever melts away, but Olaf and friends to stick around | Diamond Anniversary photo ops and the Word of the Day? | Lenore Moreno sets new course record at 2015 Tinker Bell Half Marathon | This and that... | Crowd Forecast

One of the original Happy Haunts has reappeared at Disneyland's Haunted Mansion. The Hatbox Ghost debuted Saturday morning, with large crowds in attendance to see the return of a figure some considered to be an urban legend. Disney was clearly expecting strong interest in the new ghost, and opened Fastpass service for the weekend. Once the Fastpass tickets were gone, the wait time swelled to as much as 75 minutes. 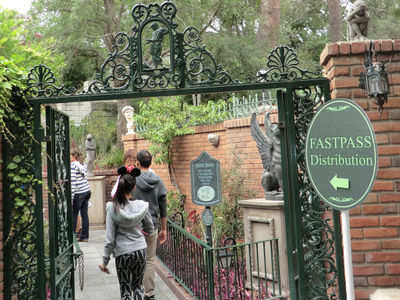 Disneyland takes the unusual step of opening Fastpass for the Haunted Mansion during a non-holiday period to accommodate crowds who turn out for the return of the Hatbox Ghost. Photo by Adrienne Vincent-Phoenix.

ThemeParkHD posted a good video of the elusive specter (see below). For those who want information without spoilers, the Hatbox Ghost is located after the bride, on the right as you transition from the attic to the graveyard scene. This is a new space created where there was previously no show scene. It's impossible to miss him. and you should be able to see the effect in the time your buggy is in front of his location.

MousePlanet columnist David Koenig writes that even as the Hatbox Ghost has reappeared at the mansion, another longtime feature might be disappearing:

The scuttlebutt among cast members is that Walt Disney Imagineering has been eyeing the attraction's original pet cemetery, which is located on the north backstage side of the building.

The cemetery is the final resting place of Stripey the skunk, Bully the bullfrog, Big Jake the dog, and Miss Kitty the cat.

Most guests, apart from those who are "backdoored" around the side of the building, don't even know it exists.

Team Disney Anaheim considers the area "dead space." So, WDI is considering demolishing the cemetery in order to make it a parking lot for guest ECVs.

The pet graveyard, admitted one cast member, "is not much, but it is something guests often ask about and request to see," adding that "it is part of the Mansion's history."

The area was originally built about 35 years ago. In 1993, a larger pet cemetery was added on-stage, in front of the Mansion.

Frozen Fever melts away, but Olaf and friends to stick around

Frozen fans can still get their fix in the "For the First Time in Forever: A Frozen Sing-Along Celebration" in the Crown Jewel Theatre. The show remains on the entertainment schedule after the official end of Frozen Fun, and Disney has made no announcement about an end of the show.

You can still meet Olaf in Hollywood Land after Frozen Fun officially ends. The meet-and-greet is scheduled from park opening until 5:00 p.m. daily through Saturday, June 13, the last date for which detailed entertainment schedules were available as of press time. Likewise, Anna & Elsa's Royal Welcome continues in the Animation Building. Fastpass is used for both meet-and-greet experiences, so be sure to grab one before you start your day.

Diamond Anniversary photo ops and the Word of the Day?

Last month, Disneyland announced the Diamond Days Sweepstakes, a promotion tied to the park's 60th anniversary celebration. The contest offers daily and weekly prizes, including: VIP tours; a replica Cinderella slipper topped with a diamond and topaz pendant; invitations to private events like a tailgate party in Cars Land; or even a 1-carat, custom-engraved diamond gemstone, along with an overnight stay in the Disneyland Dream Suite. 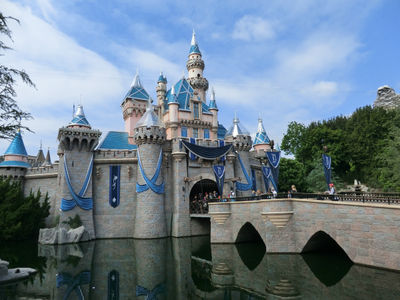 Another layer of fabric draping decorates the towers of Sleeping Beauty Castle. Photo by Adrienne Vincent-Phoenix.

Disney provided no details about how to enter the contest, but we think we have an inkling. Disney is set to install "word of the day" signs at each of the theme park entrance locations: 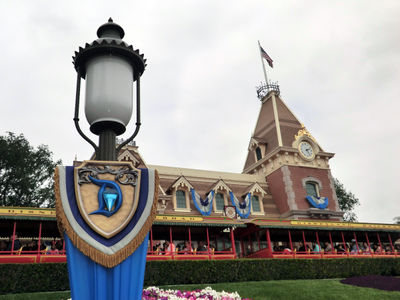 When the contest website was first published, it read that visitors "must be present on the Disneyland Resort premises" to enter or win the prizes. That language has since been removed, but we're guessing that Disney will use this "word of the day" as part of the entry process. You may be required to submit the word via email, text message, or tweet (Twitter message) to enter, and will be notified if you are randomly selected as the winner. Or maybe a new version of the Dream Squad will approach random visitors in the parks or hotels and award prizes if they can produce the word of the day on request. Either way, the "on the Disneyland Resort premises" requirement prevents people from entering the contest from their home in the other side of the country as soon as the word of the day is shared via social media. 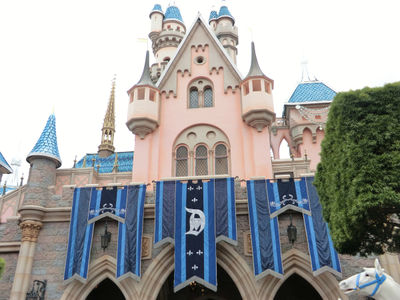 Banners decorate the back of Sleeping Beauty Castle for the 60th Anniversary celebration. Photo by Adrienne Vincent-Phoenix.

Disney says that all details and official rules will be announced on Friday, May 22, but also that "specific prizes to be awarded in the weekly sweepstakes will be announced online the preceding week," so we may know more by this Friday (May 15). One thing that hasn't changed is the eligibility requirements—the contest is open to legal residents of the 50 U.S. states, D.C., Mexico, and Canada (excluding Quebec) who are the age of majority as of date of entry. 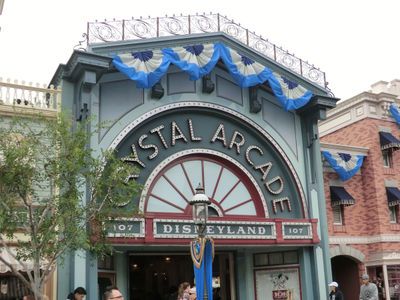 Along with the three word of the day signs, Disney is also set to install a handful of 60th Anniversary photo spots around the resort. So far, we know of these locations for photo spots:

With a finish time of 1:15:55, Southern Californian Lenore Moreno (from West Covina) not only won yesterday's 13.1-mile Tinker Bell Half Marathon in Disneyland, but she also shattered the course record (of 1:24:11) by over 8 minutes. [This comes out to a pace of roughly 5:47 per mile.]

"Just being inside Disneyland, I think that's what gave me that push and helped me to forget about how long this half marathon was and just to enjoy the moment," Moreno said. "I couldn't have done it anywhere else. Passing under that castle was just magical."

Topping the field of 13,000 runners was second-place finisher Ann Mazur of Charlottesville, Virginia, who finished in 1:24:10. Right at her heels was Anne-Marie Nuno of Irvine, California, who came in third at 1:24:21. 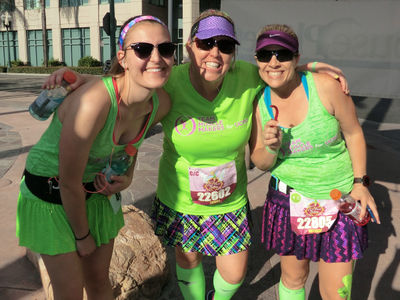 Hannah, Lonna, and Melissa from Team Muscle Makers stop by the Team MousePlanet cheer station during the 2015 Tinker Bell Half Marathon. Photo by Adrienne Vincent-Phoenix.

Although individual male runners are not eligible for prizes in the women-focused event, Michael Long (34) of London, England, was the fastest male finisher, crossing in 1:21:27.

Race results are available on the runDisney website, so you can check your official time.

The 2015 Tinker Bell Half Marathon weekend also featured the Inaugural Pixie Dust Challenge, which combined the 10K and Half Marathon events. Disney has released the results of that challenge, but there was not a separate prize in that category. An estimated 32,000 runners competed in the weekend events, which also included a (3.1-mile) Never Land Family Fun Run 5K and runDisney Kids Races. 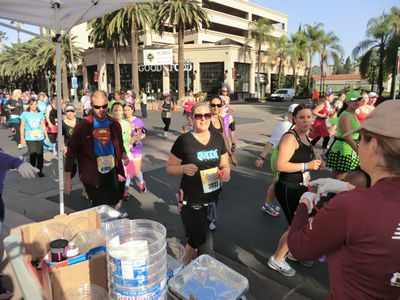 Team MousePlanet volunteers pass out licorice to runners during the 2015. Tinker Bell Half Marathon. Photo by Adrienne Vincent-Phoenix.

Special thanks to Jen and Jenny who helped staff our Team MousePlanet Cheer Station at mile 8.5. The station provided over 60 pounds of Red Vine licorice, and loads of support and inspiration to the more than 13,000 runners and walkers in the half-marathon.