Inside Out pre-parade to debut at Disney California Adventure | Bug's Life Theater to host preview of Ant-Man movie | CHOC Walk Update and CHOC-tober discount tickets | This and that... | Crowd Forecast

Inside Out pre-parade to debut at Disney California Adventure

The Disney Parks Blog last week announced a new pre-parade will appear before the Pixar Play Parade at Disney California Adventure starting June 19. The new pre-parade is based on the upcoming Disney-Pixar film Inside Out, and will feature the five Emotions from the film: Joy, Fear, Anger, Disgust, and Sadness. 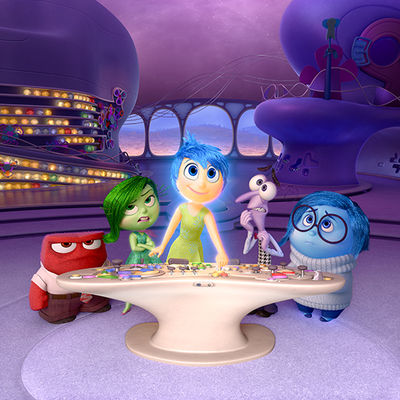 The Emotions will star in a new pre-parade at Disney California Adventure starting June 19. Photo © Disney.

We noted several weeks ago that Disney had posted an audition call seeking hand-and-rod puppeteers for a "new exciting and high-energy parade that winds its way through the heart of the Disneyland Park." At the time, we speculated that perhaps there would be a new Muppet unit for the Paint the Night parade. We now know that wasn't the case, but there has been no sign of hand-and-rod puppeteers in either that or Mickey's Soundsational Parade. Could it be that Disney was really auditioning potential puppeteers to portray the Emotions? We'll know June 19.

Disney California Adventure will also host a preview of the new Ant-Man movie, fittingly housed in the Bug's Life Theater. The preview will include a display of the Ant-Man suit from the movie. The sneak peek begins June 19, and the movie opens July 17. 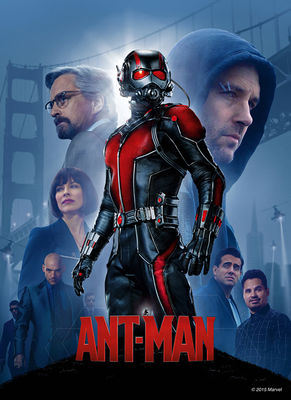 The Ant-Man suit will be part of a sneak preview of the movie available at Disney California Adventure. Photo by Adrienne Vincent-Phoenix.

Registration is now officially open for the 2015 CHOC Walk in the Park, to be held Sunday, October 11 at the Disneyland Resort. This year marks the 25th Anniversary of the CHOC Walk, and Team MousePlanet will return for our eighth year supporting Children's Hospital Orange County. Thanks to the efforts and generosity of our readers, Team MousePlanet has raised over $48,000 for CHOC since 2008.

For this 25th Anniversary event, CHOC has raised the minimum fund-raising commitment. There is no charge to register for the walk, but walkers (ages 3 and up) must commit to raise $65 before the event. We invite MousePlanet readers, friends, and family members to join our team for the event.

When you walk with Team MousePlanet, we handle check-in for you, saving you a drive to Orange or Irvine the week before the race to collect your wristband and t-shirt. You only have to meet us in Downtown Disney the morning of the walk to collect your goodies, and then head right into Disneyland to start the walk.

If you prefer to have your shirt and wristband before the walk (some people like to personalize them), you have the option to have them shipped to you by CHOC for a fee of $10. Be sure to select this option when you register—we don't know if you can add it later.

Are you ready to CHOC Walk with Team MousePlanet? It's easy to sign up—just visit our team page.

In addition to helping support an outstanding local charity, one of the benefits of participating in the CHOC Walk is the opportunity to purchase discounted Disneyland tickets during the CHOC-tober promotion. Walkers who meet the $65 fund-raising minimum can purchase a 1-Day 1-Park Disneyland Resort ticket for $50, or a Disneyland Resort 1-Day Park Hopper ticket for $78. The tickets are valid starting October 11, 2015. CHOC has not yet announced the end date of the CHOC-tober promotion, but we will share details as soon as we know them.

...Disneyland is again offering Fastpass tickets for Buzz Lightyear's Astroblasters. Fastpass service for this ride was discontinued because the machines were converted to issue Fastpass tickets for Star Tours: The Adventures Continue. Star Tours will continue to offer Fastpass service, sharing space with Buzz. Fastpass distribution has ended at Autopia, where the machines are now behind the Innoventions construction wall.

...Guy Selga at TouringPlans notes that the Mad T Party at Disney California Adventure is "dry" on nights when Grad Nite events are being held in the park, meaning there are no alcohol sales at the dance party's two bars. The non-alcoholic options are still on the menu on these nights. There are three Grad Nites scheduled this week: Wednesday, Friday, and Saturday.

...Disney will be renovating two rooms of the Grand Californian Hotel in preparation for an upcoming refurbishment of all guest rooms in the hotel. The two rooms (3451 & 3453) will serve as models for the renovations, allowing planners to see the finished designs actually installed in rooms before the renovations begin.

This may also present a future opportunity for Disney fans to purchase the current room furnishings when the renovations begin. When the Grand Californian replaced their original entertainment centers with the current version several years ago, the old units were offered for sale at Disney's property control sale. If you love the Arts & Crafts-style furnishings used at the Grand Californian Hotel and know a Disney cast member, ask them to keep their eye out for information about a possible sale.

The Orange County Register contacted Disneyland for comment—something that didn't seem to occur to any of the other sites spreading this news—and received a reply that the park will remain open on June 15. The park is scheduled to be open from 8 a.m. to midnight. It's possible that the Kardashian-West clan may visit Disneyland on the 15th, but they won't have the entire park to themselves if they do.

...Artist Dave Avanzino will debut two new editions in his popular Icon Letters collection this weekend during his appearance at the Disneyana shop in Disneyland. The Icon Letters series was first introduced for Disneyland's 50th Anniversary, and some of the titles became very hard to find shortly after their introduction. 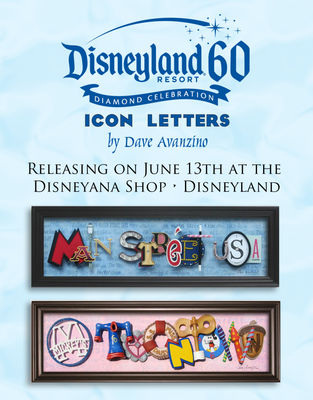 ...Look for a new D-Tech sales display to debut at the D Street shop in Downtown Disney later this summer. D-Tech has been hugely popular at Walt Disney World, where the Marketplace Co-Op shop offers customized D-Tech on Demand phone cases for a variety of models. It's unclear if the on-demand product line is coming to Disneyland, but a building permit filed by Disney for the new display certainly suggests that it could be in the works.

...One of the gifts distributed to media and invited guests during the 60th Anniversary premiere events at Disneyland was a messenger bag featuring the anniversary logo, and filled with Disneyland souvenirs. MousePlanet has listed the set we received on eBay, with all proceeds to benefit Children's Hospital Orange County via the Giving Works program. These unusual items cannot be purchased at Disneyland, so be sure to check out this auction for your chance to win a unique anniversary souvenir. The auction closes Sunday, June 14 at 7:40 p.m. Pacific. 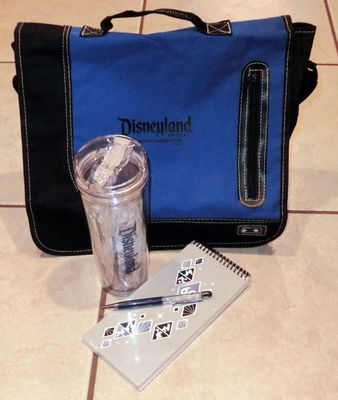 All proceeds from the sale of this Disneyland souvenir benefit Children's Hospital Orange County. MousePlanet photo.