Star Wars Realism and the Goods from San Diego Comic-Con

Most of the latest news regarding Star Wars has come from the San Diego Comic-Con International, which took place this past week. Lucasfilm conducted a panel for The Force Awakens but did not present a new trailer for the movie. The panel did, however, present one large fan-service smorgasbord that at times allowed the cast to speak directly about their experience in the filming and at other times flooding the auditorium with an aura of nostalgia.

This panel was not about revealing tidbits of information or unveiling a new character or plot twist, no, it was about generating excitement, about assuring fans that the approach to the film is grounded in realism, and about creating an atmosphere for fans to just feel good about Star Wars. I can't speak for the fans that were there, but I believe there was little to be disappointed about.

Before recapping the panel, let me follow up on my previous article ("Playing Star Wars," June 25, 2015) to mention some of the new toys revealed at another Comic-Con panel, this one by Hasbro and Lucasfilm. A new TIE Fighter vehicle from Episode VII shows the iconic design of the original but with new embellishments, like white panels, as part of a new paint scheme. 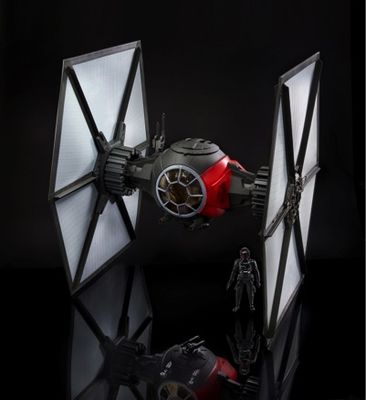 TIE Fighter and Pilot figure coming to the Black Series (i.e. this is big) © Lucasfilm Ltd.

New Force FX lightsaber toys will be sporting "new tech" and come with a clear display stand for its new models of Yoda's and Darth Vader's weapons.

When it came to the movies, the only news about the forthcoming Anthology films was that the first, Rogue One, was to begin shooting in a couple weeks. This is good news for the first of the new standalone movies set to hit theaters in December 2016, one year after Episode VII.

Information about a Han Solo anthology film wasn't divulged, nor was anything revealed about the character Boba Fett being a part of that story. Rumors have recently sprung up about an Obi-Wan Kenobi anthology film, but again, nothing official has been stated. Even though we know little about these spin-off movies, it is certainly enough to create a buzz about Star Wars keeping its momentum going for many years to come. I'm personally excited for these Anthology films, since it will fill in the gaps between the episodic releases where the wait seems like forever.

The momentum of Star Wars properties carries over to its publishing division, which also had a panel at Comic-Con. There are a lot of stories coming out in different formats and I have found it a little hard to keep up. Fortunately, there is a great summary of the coming books and comics at the Star Wars website.

The stories that fill in the actions of the characters and events occurring after Episode VI: Return of the Jedi and before the new film are part of a series called, "Journey to Star Wars: The Force Awakens." In short, two novels set their stories after the Empire is defeated and the first is Star Wars: Aftermath by Chuck Wendig followed by a young-adult novel by Claudia Gray called, Lost Stars.

Probably the most anticipated story is the five-issue comic book series from Marvel (and don't forget who owns Marvel) called Shattered Empire, which is supposed to be a much more direct presentation of events following the collapse of the Empire that also lead up to the setting of The Force Awakens. There are also some fact books, blueprint books, and even a look-and-find activity book coming out, so there are several pieces of material helping to pass the time until December. 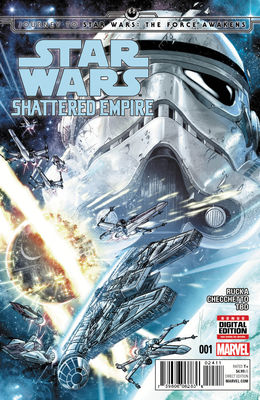 Cover of Shattered Empire #1 of a five-issues series set after Return of the Jedi, coming September 2015 © Marvel.

Let's get back to that Force Awakens panel at San Diego Comic-Con. So, there wasn't a great deal of announcements, no new footage of the movie, and no trailer. But that's OK, right? There were about 7,000 fans attending the session and millions more were on the Web watching social media and live blogs to catch the action.

For the company, the panel at this large event would seem like a good place to make some revelations, just as other movie franchises did. But Lucasfilm took a different kind of approach. They had already released the second trailer about two months ago at the Star Wars Celebration convention, so perhaps it was too soon to show another preview when there are still several months between now and the actual release of the film.

The pacing of the marketing makes it a good enough reason to hold off on any new video for now. Besides, anticipation for the first Star Wars movie in 10 years is already pretty fired up and putting out too much too fast could backfire easily. If by chance some part of a preview got negative reactions then the company would possibly have a long period of sour buzz to address.

The marketing strategy does seem to have control of its plans which seem to be of the "under-promise, over-deliver" sort that arguably sets conditions better for the most satisfaction when the film finally comes out. I like this approach because I don't want to know too much about the plot before going into the theater. Also, I am already planning to buy tickets. The only information I need now is when my local theater will begin selling them.

On the other hand, not showing any new footage at all is also a bit of a risk. While they don't want to saturate the world with too much information and have the movie spoiled before its release, they also don't want fans to feel ignored. We like finding things out in a natural-feeling course of time but that only comes from a trust between fan and company. That trust must be built. So, how would they approach this sticking point. Well, Lucasfilm and company actually showed footage at Comic-Con, but of a different variety. Here is what they showed at the convention:

Needless to say, the footage shown in this video is both amazing and poignant. Amazing in that we saw a lot of hard work and passion going into the film's creation. Poignant in that the impression we get from stuff like this is that Star Wars is the stuff of many fans' dreams—it is more than a movie, it is part of something greater: a collective fandom, or a collective consciousness of people who find joy in these stories and also find a bit of themselves in these stories.

And to make these stories believable, every detail is important because the greater the attention to the details means greater care is put in the craft in order to give you an experience that feels genuine and above all, real.

We want to feel like we did when we first saw Star Wars, we want to feel that "this may all be happening right now" to quote the original film's teaser. We want to be amazed again. Worlds created from computer-generated imagery and movies that rely too much on them doesn't quite amaze us as it once did because we've grown accustomed to recognizing them. For Lucasfilm to underscore their process of using practical effects and real sets, it demonstrates their commitment to accomplish the sense of realism we desire.

Finally, after the trailers, announcements, and conventions over the past months, where there has been little to no mention of Disney's presence in this production, none other than the director himself, J. J. Abrams, spoke highly of the company for giving them one great resources: time. At Comic-Con, he said:

"We're editing. We have a cut of the movie. We're in this extraordinary moment where we're doing fine-tuning. And I say 'extraordinary' because in this business a lot of times there are release dates before there are scripts. And to have the time and to have Disney give us the time to do it right is not a small thing. And so we're working hard to make the movie more of what it wants to be."

I like how Abrams speaks of what the movie wants, and not what he wants. There is a slight distinction in such a statement. Fans have felt ownership of the old movies for some time now—"they belong to us" we have often said. Because of this, fans have been critical of newer movies and of changes to the old ones. So, to hear the director of the movie that is yet to come refer to it as its own thing, it indicates he views the movie as art, as something larger than himself and outside of himself. It is, to me, an assuring sentiment, one that does create an aura of nostalgia, one that generates excitement, one where the result could transcend the medium.