The Vacation Kingdom of the World: Travels in Tomorrowland

Each land at the Magic Kingdom has an identity all its own, an often difficult-to-describe feeling that permeates the area, from the architecture to the music and the landscaping.

As evening falls, each Magic Kingdom land glows with a special ambiance as shops, attractions, walkways, and landscape elements sparkle in the glow of evening with stunning accent lighting.

In the very early morning, when the Magic Kingdom is fresh and bright, each land glistens in the morning dew and seems as fresh and new as on opening day.

Several years ago when my sons were four, I wrote a piece defending Tomorrowland. While I acknowledged its flaws and highlighted its shortcomings, the overall tone of the piece was positive. Tomorrowland had much to offer, I wrote, and my family and I had enjoyed a pleasant morning there partaking in its many adventures. I realize now that I was seeing this land through the eyes of my sons. To them, Tomorrowland did seem to "sparkle and shine" with a promise of a forward marching parade that we could share. This year, however, Tomorrowland seemed to have lost whatever luster it once held.

What is different other than my perspective? As it turns out, nothing is different—and therein lies the problem. I love Disney parks, and by and large, I dislike wholesale changes to places I've come to admire and cherish. Tomorrowland is different. While the architectural bones of this land still hold much promise, the entire area needs an overall design upgrade as well as an overarching theme or cohesive storyline.

Let's start at the very beginning, the entrance to Tomorrowland. The original approach was modern and austere featuring lots of water, blue tile, and palms. From my childhood memories (and my dad's slides) I recall liking this look and feel. In the mid-1990s, the entire entrance to this land was reworked to keep with the sci-fi fantasy approach to the future. Rockwork, a colorful archway, and the neon-colored Avenue of the Planets ending at a new Astro Orbiter and mobile-like planet configuration now greet guests. It's warmer and a bit more inviting, but a lot more confusing. The infusion of cartoon characters and a cluttered storyline involving a League of Planets and a community of aliens gets lost in the myriad spinning, twirling details. The design of the entrance tries to create a time and a place, but it fails to establish a feeling for this land in that same way that Adventureland and Frontierland feel right and understandable.

The heart of any Disney Parks land resides in the attractions that anchor that land, and Tomorrowland's attractions are at the heart of the problem. The first two attractions—Stitch's Great Escape and Monsters, Inc. Laugh Floor—are really unworthy of the large footprints they occupy. My family consistently walks right past them as if they don't exist. Clearly Disney could use this valuable space for something more innovative and engaging than these two attractions. My sons would like to see something based on the new Disney Junior show Miles from Tomorrow. I'm not sure what I would put here if I had the power to change these two particular attractions, but I am sure that somebody at Walt Disney Imagineering must have an idea or two.

Next up: Rocket Tower Plaza and two iconic attractions. The Tomorrowland Transit Authority Peoplemover represents an era when Walt Disney Imagineering's innovations were often applicable to the world outside a Disney theme park. This slow-moving attraction offers a wonderful overview of Tomorrowland as well as some breath-taking views of the Magic Kingdom's Cinderella Castle and the Hub. It also represents a sincere effort to improve transportation in urban areas and has actually been adapted at several airports in the United States. The Astro Orbiter is a glorified Dumbo ride themed to space travel. Despite its long, slow-moving lines; uncomfortable elevator rides up and down from the loading platform; and all-too-brief ride, we still enjoy this attraction for its colorful, iconic rockets and the brightly lit planets that form its center. We learned something interesting this past trip from the host at this attraction: the Astro Orbiter is the tallest ride at the Magic Kingdom. As would be expected, the views are extraordinary. 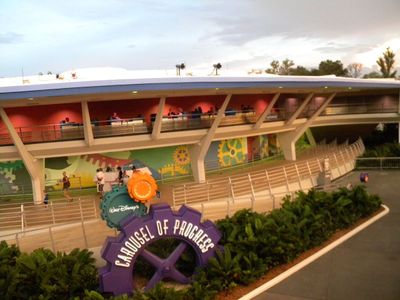 The Peoplemover glides past Tomorrowland attractions, including the Carousel of Progress. Photo by J. Jeff Kober.

While fans of Delta Dream Flight and If You Had Wings may mourn the loss of these particular attractions, we enjoy the replacement: Buzz Lightyear's Space Ranger Spin. Its colorful, interactive, and much more fun than Toy Story Mania at Disney's Hollywood Studios. The larger-than-life Buzz Lightyear audio-animatronic and the huge Etch-a-Sketch in the queue are worth the wait that often accompanies this popular attraction inspired by the Toy Story films from Pixar.

Walt Disney's Carousel of Progress is a landmark attraction for its day. While I am sentimental and extremely protective of attractions and places created during the heyday of Disney Imagineering, it seems that now may be the best time to revamp this old favorite. We took a spin on the Carousel for the first time in many years, and it is definitely showing its age. The show is charming in a nostalgic sort of way, but the stereotyped roles of a "typical" white middle-class family are a bit uncomfortable; the domesticated mother is cliched and the chatting father seems to have a lot of time on his hands. The theater itself is also looking terribly worn, dirty, and even a little smelly. Not exactly "good show" in Disney parlance.

Luckily, Space Mountain is as wonderful as ever. The thrills here never seem to age, due in part to the wonderful sensation of soaring through the cool darkness aboard a smoothly gliding rocket. Disney has certainly created bigger thrills since the 1975 debut of Space Mountain, but even Expedition Everest and Rock 'n Roller Coaster pale in comparison to the thrill and joy provided by Disney's original thrill ride. 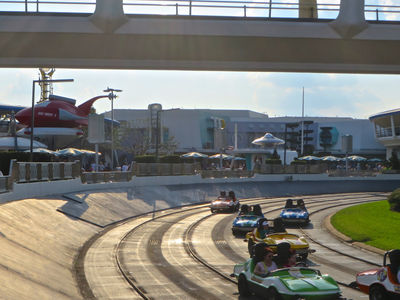 The Tomorrowland Speedway is a perennial favorite of children who fantasize about driving their own car. Photo by Alan S. Dalinka.

The final attraction is the Tomorrowland Speedway. I personally dislike this particular attraction for several reasons: it's hot, smelly, and ruins the theming of the surrounding Mad Tea Party and Dumbo, the Flying Elephant. Again, this attraction takes up a large amount of real estate which surely could be put to better use. That said, my kids love the Speedway, so I hate to be too hard on it.

There aren't many shops in Tomorrowland. There's a small kiosk featuring the Little Green Men from the Toy Story films that offers toys featuring familiar Pixar characters. At the end of Buzz Lightyear's Space Ranger Spin, there's a small shop featuring similar wares. The Merchant of Venus—one of the worst names of any shop on property, rivalling some of the worst puns once found at Disney's California Adventure—carries typical Disney Parks merchandise. The nearby Mickey's Star Traders is much better, offering a wide range of merchandise. While most, if not all, of the wares here are found everywhere from the Emporium to the World of Disney, sometimes Mickey's Star Traders features harder to find toys or t-shirt sizes. We've found some great treasures here over the years. Clearly, a better selection of appropriately themed merchandise might enhance the shopping experience in this land.

There are two eateries here and I must admit that I have never dined at either of them, so I cannot comment on the quality or value of the food. Cosmic Ray's Starlight Café and Tomorrowland Terrace are fast food restaurants that lack atmosphere and charm. They are not my family's cup of tea. There is nothing on the menus or in the look of these establishments to entice us to waste a precious vacation meal at these locations. 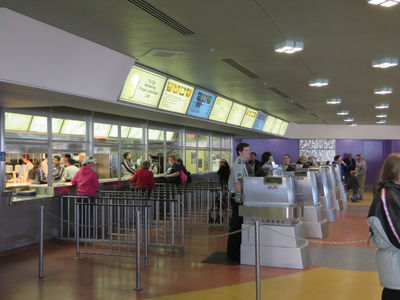 One reason that Tomorrowland seems so barren is its lack of colorful, inviting landscaping. Vast expanses of concrete and blacktop cover this land. While there is some attempt to soften the hardscape with plants, the choice of honey locust trees, with their scruffy bark and thin leaves leave much to be desired. The addition of metal palm trees does not help. Over at Disneyland, there was a concerted effort to bring life and color to the future through the use of varied and warm plantings. The Magic Kingdom's Tomorrowland needs some of this attention to landscaping's role in creating the atmosphere of an environment. 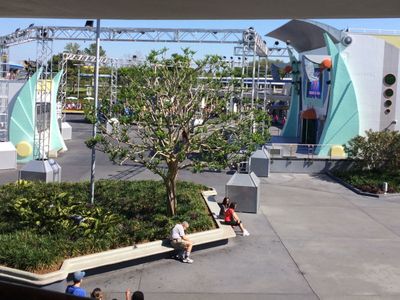 The dance party stage in Tomorrowland is surrounded by large areas of concrete. Photo by J. Jeff Kober.

As might be expected, the overall ambiance of Tomorrowland is most lacking. The landscaping, lack of thematic unity in the attractions, and the contrasting look of the "new" Tomorrowland with the "old" Tomorrowland all contribute to this lack of ambiance. In her piece on Tomorrowland's music, FoxxFur at Passport to Dreams Old and New notes that "the 1994 Tomorrowland sometimes seemed more sarcastic than genuinely optimistic" and the music that accompanied it was similarly lacking in warmth or sincerity. She goes on to note that with the return of the older musical tracks, "the soothing, upbeat New Age loop" works for the New Tomorrowland because it gives Tomorrowland "back a beating heart which perhaps it would have otherwise lacked."

What Do You Think?

While I have many suggestions for improving Tomorrowland, there's much I like. My family enjoys many of this land's finest attractions; in fact, I was probably the only member of my family to consciously note the faded glory of this area. Visions of a rebirth for this land inspired by the promising look of Disney's hope for a summer blockbuster Tomorrowland have filled my head. Those visions have faded along with the disappointing box-office for the George Clooney film. Still, with the addition of so many stunning details in the Magic Kingdom's other lands, surely Tomorrowland should be next on the docket for an extreme makeover.