Disney's new Harambe Market is a small area located behind Mombasa Marketplace in Africa. It's both a destination to find some great African street food-inspired dishes, and an alternative walkway when the central square in Harambe Village is crowded.

To get to Harambe Market, head over to Africa when you enter Disney's Animal Kingdom park. Immediately after crossing the bridge over the Discovery River, turn right as if going to Asia. By then you should be seeing signs showing the way to Harambe Market, but it's the first walkway on the left after passing Tamu Tamu Refreshments. 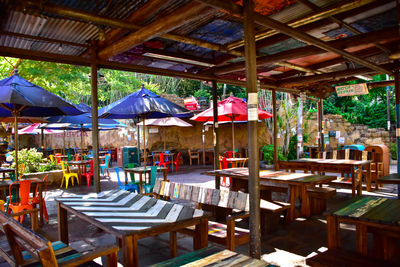 With room for more than 200 people, there's plenty of outdoor seating in Harambe Market. Photo by Bonnie Fink.

We arrived at Harambe Market in the morning right after the park opened, and found it virtually deserted. The reason? Probably because the restaurants don't open until 11:00 a.m. Up until that point, there's no real reason to go there, other than it being an alternate route to get through Harambe Village. 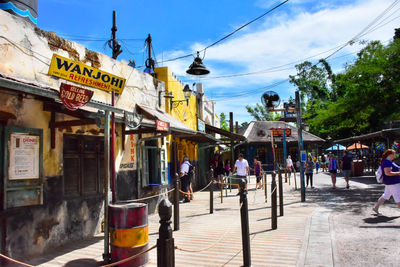 It's great fun to walk through and see the workmanship and decorations that make you feel like you're really in east Africa. And of course, we found it a great place to sit quietly and enjoy our coffee. 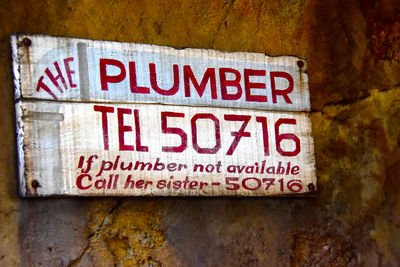 The signs look like something you might expect to see in an east African village. Photo by Bonnie Fink.

There are four quick-serve restaurants at Harambe Market. They all open with a ceremony that involves a speech by a local merchant and the ringing of a bell by a guest.

The restaurants are Wanjohi Refreshments, Kitamu Grill, Famous Sausages, and Chef Mwanga's. Menus are varied but all feature African-inspired cuisine with the appropriate spices. 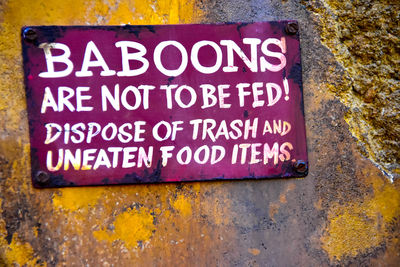 There's a message here, whether you're in east Africa or Animal Kingdom. Photo by Bonnie Fink. 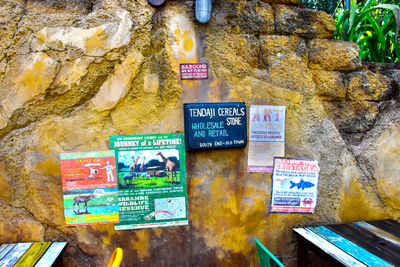 Many of the walls at Harambe Market are decorated with authentic-looking signs and posters. Photo by Bonnie Fink.

For dessert, there's an African milk tart consisting of coconut custard in a chocolate tart shell, dusted with sugar and spice powder, that is then drizzled with dark chocolate ganache. Each restaurant serves this dessert. 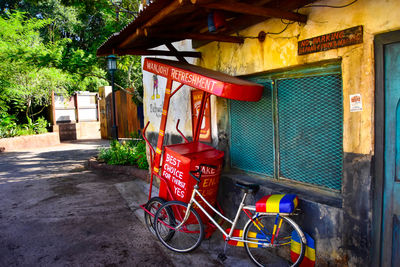 Attention to detail all around Harambe Market can easily lead you to believe you're in Africa. This abandoned bicycle and food cart look like they were just left there last night by the owner. No doubt the food cart will be re-stocked for tomorrow's market. Photo by Donald Fink. 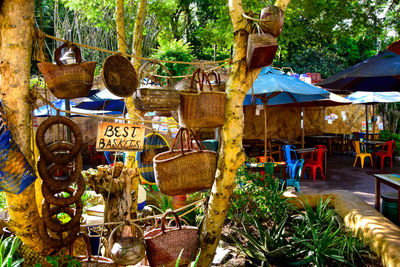 Did the vendor from Best Baskets just step away for a moment and leave the baskets unattended? That's the way it looks. Photo by Donald Fink.

It's worth a pointing out that the attention to detail in Harambe Market is remarkable. We've learned to have high expectations from Disney Imagineers, but the detail here is above and beyond, in our opinion. 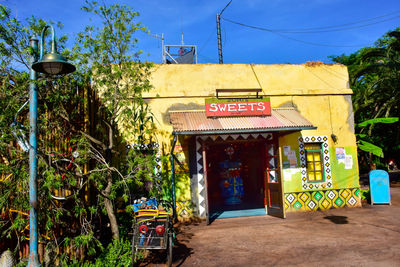 Zuri's Sweet Shop is located directly across the walkway from Harambe Market. Photo by Bonnie Fink.

While probably not part of the Harambe Market, Zuri's Sweet Shop is located directly across the walkway and is well worth a stop in if you pass through. There is an assortment of Animal Kingdom-inspired items, including the usual hats, T-shirts, and coffee cups—and of course, a great selection of Animal Kingdom sweets; everything from candied apples to brownies. Our favorite was still the chocolate chip Mickey cookie. 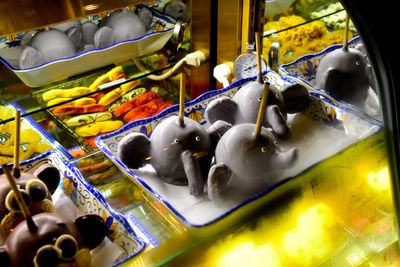 Zuri's Sweet Shop near Harambe Market offers all sorts of treats, like these elephant-inspired candy apples. Photo by Donald Fink.

Another stop that's definitely not part of Harambe Market but worth mentioning is the new Starbucks. This venue was recently opened, and a Tom Richards wrote a piece here on MousePlanet about it. But we were so taken with the interior of the shop that we wanted to show it off.

The decorations are perfect for an Africa-inspired setting in the Starbucks at Animal Kingdom. Photo by Donald Fink.

When you next come to Disney's Animal Kingdom, Harambe Market is certainly worth a visit. Whether you're looking for lunch or just using it as a shortcut to get around the often crowded Harambe Village, you'll most likely be pleased with what you find. Even if you don't stop to eat, at least spend a few minutes and admire the attention to detail the Disney Imagineers have presented.