The Walt Disney Studios D23 Expo presentation on Saturday morning of their upcoming live action slate was flashy and full of celebrities, but without many new revelations; most of the news had been previously announced.

Kevin Feige (President of Marvel Studios) kicked off the Marvel presentation by thanking everyone from the creative teams to the fans for a successful Phase II, then continued to introduce next year's Marvel films out of order from their release dates. 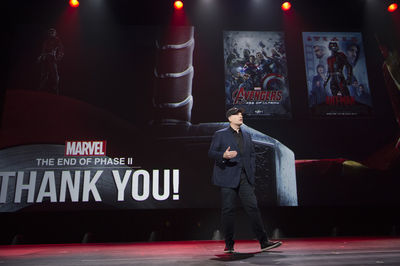 Kevin Feige thanks Marvel fans for their support. Photo © Disney.

First up was Doctor Strange, which will be directed by Scott Derrickson; shooting begins in November. Chiwetel Ejiofor will play Baron Karl Amadeus Mordo and, after months of rumors, Benedict Cumberbatch was officially confirmed to play the titular role of Doctor Strange. Cumberbatch—who was unable to attend Expo due to his run on London's West End as Hamlet—sent an exclusive video message to fans, expressing his excitement for the role. Although no footage has been shot, guests were treated to exclusive concept art for the film. Like Guardians of the Galaxy and Ant-Man before it, Doctor Strange promises to unlock many new dimensions, figuratively and literally, in the Marvel cinematic universe.

The much-anticipated Captain America: Civil War is scheduled for a May 6, 2016 release. Directed by the Russo brothers, this film promises to have even more Marvel heroes and villains than any previous Avengers film. The sizzle reel shown at the expo, introduced by Anthony Mackie (Falcon) and Chris Evans (Captain America), revealed several things to the audience. It confirmed the rumor that Black Panther will be in the film, that Bucky Barnes (Sebastian Stan) has regained his memories, and that Brock Rumlow (Frank Grillo) seemingly returns from the dead as Crossbones. In addition, an exclusive Easter egg was added by putting "D23" on a prison cell containing Bucky. The fast-moving clip also showed attendees the first glimpse of Martin Freeman in the Marvel universe. Although guests were anticipating an official trailer of the newest Captain America movie, they will have to wait to watch the official teaser for the film when it is released. 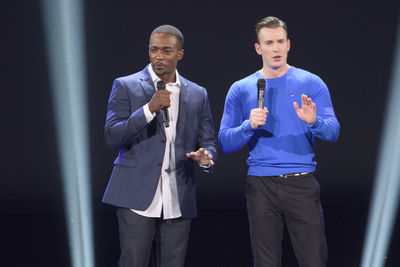 The first film discussed was The Finest Hours, which tells the story of a daring Coast Guard rescue of a tanker ship in the Northeast, and is based on a true story. Set to be released January 29, 2016, the film stars Chris Pine (Star Trek), Casey Affleck, Holliday Granger, Ben Foster, and Eric Bana. Pine talked about how inspiring his role as Captain Bernie Webber was, and a clip from the film was shown. This film is one of the few upcoming titles that is not a live-action remake or part of a franchise.

The live-action version of The Jungle Book is scheduled for an April 2016 release. Directed by Jon Favreau, the movie promises to be extremely technologically advanced with extensive use of motion-capture technology. Three cast members were at the presentation: Ben Kingsley (Bagheera), Lupita Nyong'o (Raksha), and newcomer Neel Sethi (Mowgli), whose childhood enthusiasm and purity stole the show. The sizzle reel also showed credits for Bill Murray (Baloo), Christopher Walken (King Louie), Idris Elba (Shere Khan), and Scarlett Johansson (Kaa). A new poster was premiered at the expo in addition to the exclusive sizzle reel. The poster was given to attendees of the presentation. 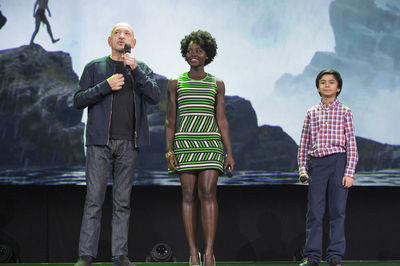 Alice Through the Looking Glass, the sequel to Alice in Wonderland, is set to be released May 27, 2016. The film is written by Linda Woolverton, directed by James Bobin, and produced by Tim Burton. Alice (Mia Wasikowska), the Mad Hatter (Johnny Depp), the White Queen (Anne Hathaway), and the Red Queen (Helena Bonham Carter) all return to their roles in the new Wonderland adventure. Sacha Baron Cohen joins the cast in the new role of Time. Alice returns to Wonderland to help save the Hatter, leading to a literal and figurative race against Time. This involves plot lines dealing with time travel to the past, giving the audience more information on why the inhabitants of Wonderland are the way they are. Wasikowska was at the presentation to introduce the sizzle reel.

The live-action version of the Disney classic Pete's Dragon is set to arrive in theaters in summer 2016. The David Lowry movie was filmed in New Zealand, although the story is set in Maine. The film stars Bryce Dallas Howard (Grace), Oaks Fegley (Pete), Robert Redford (Grace's father), Wes Bentley (Jack), and Karl Urban (Gavin). Dallas Howard was present, and a brief clip of the film was shown to the audience.

The Queen of Katwe joins Disney's long list of sport films. Based on a true story, the film takes place in Uganda and was mostly shot on location. It tells the story of a missionary who teaches people in a small Ugandan village the game of chess, and who discovers a young girl with a special talent for the game. Directed by Mira Nair, the film stars Lupita Nyong'o and David Oyelowo. Nyong'o came on stage to discuss how inspiring the story was, and, as a native of Eastern Africa, particularly close to her heart.

Another live-action version of an animated classic, Beauty and the Beast, will be a musical with many of the old favorite songs from the original movie. Set for a March 2017 release, the Bill Condon-directed musical was filmed in London. In addition to the music in the animated feature, two new songs written by Alan Menken with lyrics by Tim Rice will be in the movie. Due to filming schedules, none of the cast was able to be at the presentation. However, a few cast members did make exclusive videos to send to D23 Expo attendees across the pond. Emma Watson (Belle) said it is a childhood dream come true to be playing a Disney princess. In a second video, Luke Evans (Gaston) and Josh Gad (Le Fou) sang a few bars of "Gaston." 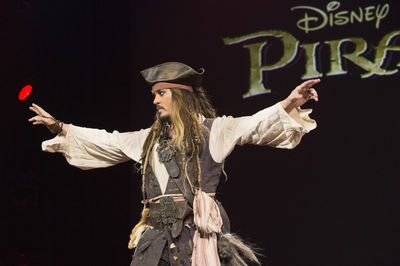 The final film presented by the Disney Studios was the franchise-continuing Pirates of the Caribbean: Dead Men Tell No Tales. Johnny Depp (Captain Jack Sparrow), Orlando Bloom (Will Turner), and Geoffrey Rush (Barbosa) reprise their roles. They will be joined by Brenton Thwaites (Henry), Kaya Scodelario (Carina Smith), and Javier Bardem as Captain Salazar, a new villain. It is being filmed in Australia and has an anticipated release of July 2017. Newly minted Disney Legend Depp was present in character as Captain Jack. Showing method acting at its finest, attendees were treated to the sight of their favorite pirate captain stumbling around the stage and even throwing grapes into the audience.

The upcoming slate of Star Wars films was discussed last during the live-action presentation. Rian Johnson, who directed three of the most critically acclaimed episodes of Breaking Bad ("Fly," "Fifty-One," and "Ozymandias") will be the writer and director of Star Wars VIII. It is planned to be released May 2017. Colin Trevorrow (director of Jurassic World) is directing Star Wars IX. The film will be in theaters some time in 2019. 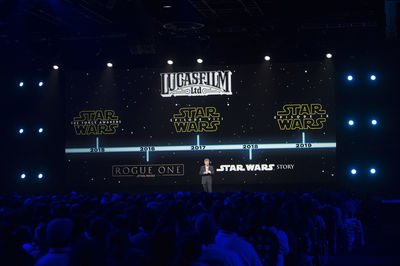 Phil Lord and Christopher Miller are directing a new Star Wars movie that will be an origin story of Han Solo. Lawrence Kasdan and son Jon are writing the script.

Rogue One, directed by Gareth Edwards (Godzilla [2014] and Monsters), is currently filming in London. Set to be released in 2016, the film takes place before Episode IV: A New Hope, telling the story of a group of rebels who steal the Death Star plans. The film stars Felicity Jones, Diego Luna, Sam Claflin, Ben Mendelsohn, Forest Whitaker, Mads Mikkelsen, and Riz Ahmed. 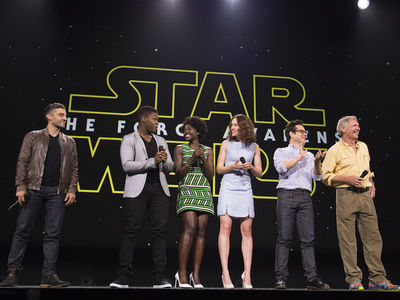 The cast of The Force Awakens, including Harrison Ford (right), and director JJ Abrams (second from right) takes the stage at D23 Expo. Photo © Disney.

Bob Iger made the final announcement of the presentation, trumping the D23 Expo's own Parks & Resort panel that was scheduled for later in the day. Star Wars-themed lands were announced for Disneyland and Disney's Hollywood Studios. The project is the largest single-themed land expansion in Disney park history at a whopping 14 acres per park. The new land will transport theme park guests to a new planet on the outer rim. Every store and restaurant in the land will be operated by a different local, allowing a fully integrated story throughout the land. One of these businesses will be a cantina. 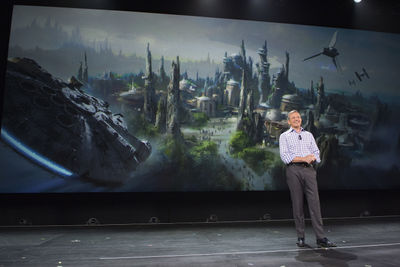 Two attractions are currently planned for the lands. One will allow guests to fly in the Millennium Falcon on a custom secret mission straight into a fight between the first order and the rebels. The second attraction was only vaguely described as involving guests in a cinematic battle The land promises to be a fully immersive experience for Star Wars fans of all ages.