Following the Walt Disney Animation Studios presentation, Pixar next took the stage during the big animation presentation on Friday at the D23 Expo. Inside Out directer Pete Docter and producer Jonas Rivera introduced Josh Cooley, who was story supervisor for the film. Cooley came up with the idea for a new short featuring the main character, Riley, from Inside Out. Riley's First Date? will be a bonus feature on the DVD and Blu-Ray release of the film. The short offers a cute inside look into the minds of Riley, her parents, and Jordan before the Riley and Jordan go skating. The short was shown in its entirety to attendees. 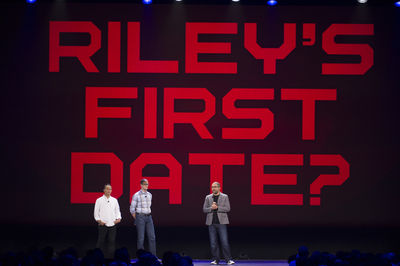 Jonas Rivera, Pete Docter, and Josh Cooley (left to right) introduce Riley's First Date?, a new short from the Inside Out team at Pixar. Photo ©Disney.

The next full-length film from Pixar is The Good Dinosaur, to be released on November 25, 2015. Directed by Peter Sohn (Ratatouille, animator) and produced by Denise Ream (Cars 2), the film takes place in the prehistoric northwest United States where nature takes on a role as a character. The movie follows Arlo, a young apatosaurus. He lives with his father Henry (voiced by Jeffrey Wright), mother Ida (voiced by France's McDormand), older brother Buck, and older sister Libby. Arlo, a young, fearful dinosaur, has an especially close relationship with his father. After the tragic death of Henry, Arlo is swept away in a river away from his family. He then meets Spot, a young boy who seems more animal than human. 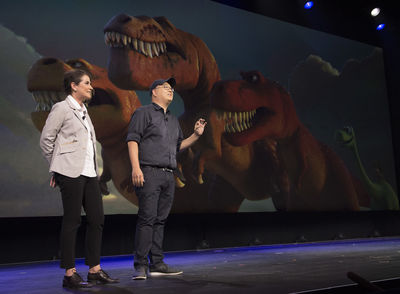 The story, which closely resembles the "boy and his dog adventure" genre, chronicles the two trying to get back to Arlo's family. Other characters include an eccentric Styracasaurus with talismans (three named Fury, Destructor, and Dream Crusher), pterodactyls, and even a group of tyrannosaurus rexes. The t-rexes, Butch (Sam Elliot), Ramsey (Anna Paquin), and Nash (AJ Buckley) are like cowboys whose arch enemies are the wranglers. This was seen in a clip during the Expo. The second clip shown featured Arlo and Spot and how much they have in common. The third showed the duo enjoying the wonders of nature. Ultimately, the movie is the story of Arlo realizing the world is a place of wonder, not of fear.

The film takes place six months after the first movie, after Dory has moved in next to the clownfish and joined Mr. Ray's class. Later in the film Dory arrives at the Marine Life Institute, also called "The Jewel of Monterey," where aquatic animals undergo rehabilitation. There she meets several new characters: Hank (Ed O'Neill) the seven-armed octopus, Bailey (Ty Burrell) the beluga whale who is convinced he has a head injury, and Destiny (Kaitlin Olson) the whale shark who is convinced she is a whale. 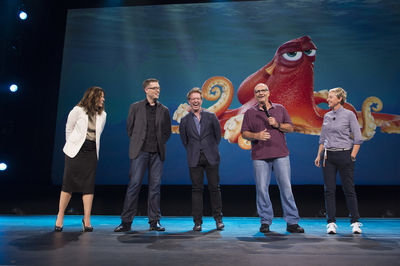 Clips were shown of each of the new Institute characters. There were also two longer clips, the first showing Dory having dreams of her past life with her parents and the second showing her arrival at the institute and first encounter with Hank. DeGeneres, O'Neill, Burrell, and Olson were present. Ultimately, Finding Dory is about the titular fish accepting herself as she is.

The long rumored Pixar film about Dia de los Muertos (Day of the Dead) finally received a name: Coco. The title comes from a character in the film, although no further details were given about who Coco is. Directed by Lee Unkrich and produced by Darla K. Anderson, who both worked together on Toy Story 3, the film is about a twelve year old boy named Miguel who discovers a family secret just before the Day of the Dead that will change his life forever. An extended animation test was shown. 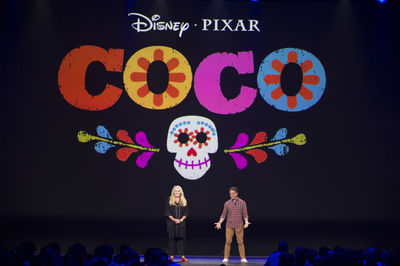 Master of ceremonies John Lasseter doubled as the director of the final film at the presentation: Toy Story 4. Produced by Galyn Susman, co-directed by Josh Cooley, and written by Will McCormick and Rashida Jones, the film presents a new genre for Pixar: the love story. The film centers around Woody, with the help of Buzz, going to find Bo Peep. The presentation ended with Randy Newman performing "You've Got A Friend In Me" for the audience. 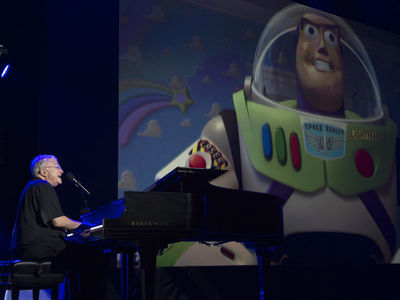 Overall, the Pixar slate looks strong. The clips for The Good Dinosaur coupled with the audience's reaction shows a sneak peak of how powerful and moving this film will be. It could very well surpass Inside Out as the best Pixar film of the year. Although many had fears Finding Dory would turn out to be another Cars 2, the ensemble of new characters gives much needed hope for the sequel. Even though Coco and Toy Story 4 are too early in development for much information to be divulged at the presentation, the quick snippets shared were enough to hook the audience.

This year's animation presentation was not as great as some of the past Expos, especially the presentation in 2013. The program went an hour and a half over its planned runtime, causing quite a few people to leave early for other events; the Pixar portion didn't even start until slightly before the planned end time. Although delightful teasers were given, many portions of the presentation left audience members wanting a bit more. A few, especially Coco and Toy Story 4, felt as if the presented material was thrown together at the last possible second. In addition, there was little to no mention of some upcoming animation projects, most notably the Frozen sequel from the Disney Animation Studios and Incredibles 2 from Pixar. Hopefully these films and more will be covered in length at the next D23 Expo.