The big animation presentation on Friday of the D23 Expo kicked off with a few words from Alan Horn, Chairman of the Walt Disney Studios, following a Studios sizzle reel that got the crowd pumped up. The main presentation was hosted by Chief Creative Officer John Lasseter, who highlighted the heritage of Walt Disney Animation Studios (WDAS), which has now been operating for 92 years since Walt Disney started it. Lasseter emphasized how WDAS has been revitalized since he came on board, and is focused on being an artist-driven studio with a mix of veterans and new young talent. 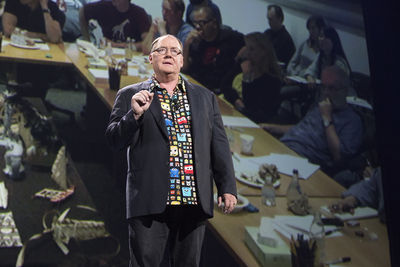 John Lasseter discusses the combination of talent at the WDAS. Photo ©Disney.

The first film highlighted at the presentation was Zootopia, which is set to open on March 4, 2016. Directors Byron Howard and Rich Moore and producer Clark Spencer hosted this portion of the panel, giving more detail into the plot of the film. Zootopia is a world created by animals, for animals. The animators studied the movements of animals at Animal Kingdom as well as on a trip to Kenya in order to understand how they might translate those movements to a two-legged version for the film. 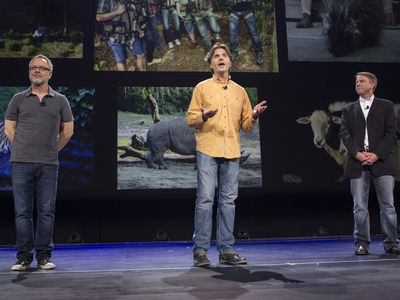 The main protagonist is a bunny, Judy Hopps, voiced by Ginnifer Goodwin, who came on stage to say a few words about voicing her character. Jason Bateman voiced the other main character of the film, a fox named Nick Wilde, who is a bit of a con man. The two team up to solve the case of a missing otter. The creators showed several development clips from the film highlighting the comedic and emotional moments that will tell the story. International pop star Shakira has written a song for the film, "Try Everything," and voices a singing gazelle in the film.

The big announcement of the day came next, when an as-yet-unannounced film was revealed. Consistent with WDAS's long history bringing fairy tales to life, the team will next tackle the tale of Jack and the Beanstalk. The film is titled Gigantic, and is set in Spain during the Age of Discovery. It is directed by Nathan Greno (Tangled) and produced by Dorothy McKim ("Get A Horse!"), and will be in theaters in 2018. Especially popular with the crowd was the news that Gigantic will feature music from Oscar-winning songwriters Kristen Anderson-Lopez and Robert Lopez (Frozen). The songwriters performed a song from the film that is sung by the 11-year-old girl giant that Jack encounters; the girl begins to play with him like a toy. Along with the girl, Gigantic features a whole land of giants, not just a single lumbering oaf as has been told in previous versions of the tale. 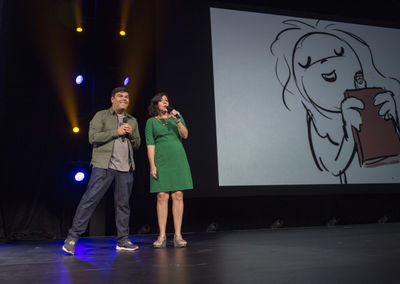 Kristen Anderson-Lopez and Robert Lopez perform a song from Gigantic while storyboard art is displayed on a large screen. Photo ©Disney.

The final presentation from the WDAS side was for Moana. Directors John Musker and Ron Clements (The Little Mermaid, The Princess and the Frog, Aladdin), and producer Osnat Shurer (Oscar-nominated Pixar shorts “One Man Band,” “Boundin’") shared some preliminary footage from the film that highlights the wonderful animation we expect from WDAS. One impressive segment showed an animation test for an island god made of lava and magma as she angrily speaks with Moana.

The story is set in the South Pacific 2,000 years ago and centers around 16-year-old Moana and her desire to be a wayfinder like her ancestors before her. Of course this brings her into conflict with her father, but she sets off on her own anyway where she meets demigod Maui, voiced by Dwayne Johnson. Johnson made a personal appearance on stage to speak about his Samoan heritage and how that inspired him for the part. The filmmakers have worked to assemble a great music team, including Opetaia Foa'i (founder and lead singer of the world music award-winning band Te Vaka), Mark Mancina, and Lin-Manuel Miranda (creator of Broadway's Hamilton). 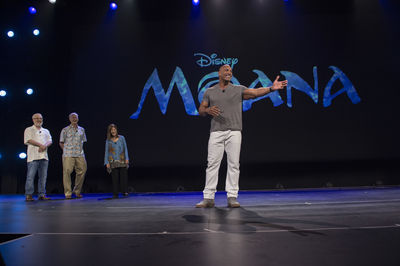 The WDAS presentation was capped by a performance from Te Vaka along with Polynesian dancers to highlight the movie's music. 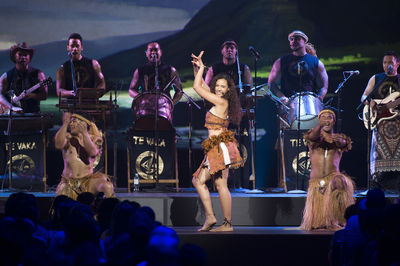 Te Vaka are part of the musical team for the film Moana. Photo ©Disney.

The animation program was originally scheduled to run from 3 to 5 p.m., but the Te Vaka performers were just wrapping up at 4:45 p.m. Some people left the presentation early to attend other programs before the Pixar contingent even took the stage. Overall, the WDAS slate has a lot of promise and originality, and it will be exciting to see the films when they hit theaters.