Many people focus on the big, flashy presentations and merchandise at the D23 Expo, but the real value of the event lies in the quieter corners of the Anaheim Convention Center. Presentations highlighting the people who aren’t always in the spotlight, but are still an integral part of making the parks run the way they do are a rare delight. The addition of the Walt Disney Archives Stage this year provided additional opportunities for the historians and archivists who work to preserve Disney history to share their passions and projects with D23 Expo attendees. The following summaries give a taste of what was presented at this year's D23 Expo.

Moderator Leslie Iwerks, director of The Imagineering Story, a documentary film currently in production and set for release in 2016, led this two-part panel covering Imagineering from the early days with Walt Disney to more recently or currently active Imagineers. Part one of the panel, “Working with Walt,” included Disney Legends Marty Sklar, Richard Sherman, and Orlando Ferrante. All three discussed their first visits to the park, and their early days working at what was then known as WED Imagineering. 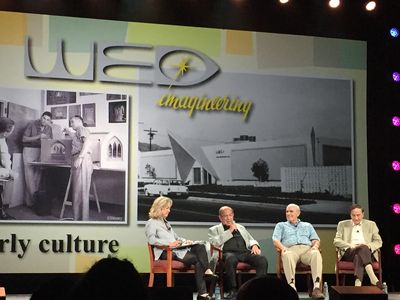 It was fun to hear the panelists reminisce; I could listen to Richard Sherman relay anecdotes for hours, like how Walt Disney wanted an upbeat song for “it’s a small world” that was upbeat but not too preachy. Ferrante shared a story of a puzzling issue they were having with the Mr. Lincoln animatronic. He would start to spasm at seemingly random intervals, which would not do during a show. Eventually they were able to trace the cause: when two monorails passed each other behind the show building, the resulting electrical surge would cause Lincoln’s glitch.

Part two of the panel addressed “Continuing the Legacy” of Imagineering with Tony Baxter, Kim Irvine, Kevin Rafferty, Steve Davison, Charita Carter, and Marty Sklar. These Imagineers all shared the stories of how they came to work at Walt Disney Imagineering (WDI) and some of the Imagineering mentors they have encountered in their careers.

Hosted by Disney Legend and retired Imagineer Marty Sklar, this session revolved around Sklar’s new book One Little Spark!: Mickey’s Ten Commandments and The Road to Imagineering. Sklar began by highlighting the list of principles and ideals that he developed for the Imagineering team during his tenure as president, nicknamed “Mickey’s Ten Commandments.” The book includes a whimsical illustration by Pam Newton of the principles. 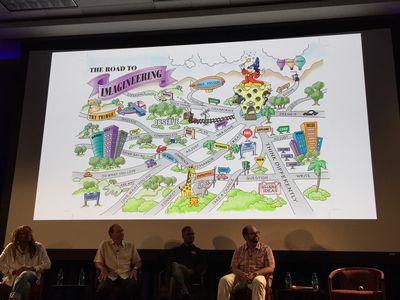 The Road to Imagineering, as illustrated by Pam Newton for Marty Sklar. Photo by Stephanie Wien.

The major highlight of the presentation was the panel of Imagineers who each shared their story about how they came to work for Walt Disney Imagineering. Daniel Joseph, who most recently worked on the new Hatbox Ghost animatronic for Disneyland’s Haunted Mansion, was fascinated by Haunted Mansion and Horizons after a childhood trip; he loved to tinker and experiment to replicate the effects he had seen.

Dex Tanksley, Project Design Manager, emphasized the need to find something you love and are passionate about, then formulate a plan to achieve your goal. Dex thinks of the people saving and spending their hard-earned money when they visit Disney Parks, and focuses on giving people the best experience they can have.

Shelby Jiggetts-Tivony, Creative Development Executive, comes from a different background than the other panelists, having not frequented the Disney Parks as a child. Her passion for theater grew out of the programs put on by the National Endowment for the Arts, in particular a peformance of “Cry” by Judith Jamison of the Alvin Ailey Dance Theater. This performance opened her eyes to what the arts can be, and her passion for art, design, and storytelling have followed her into her current role. Jiggetts-Tivony feels that “to live a creative life, you have to lose your fear of being wrong.” 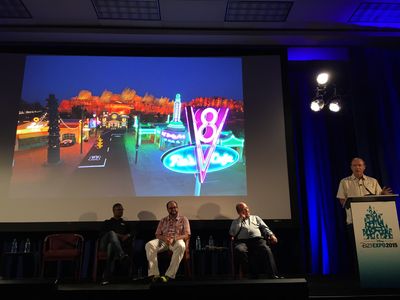 Kevin Rafferty, Executive Creative Director, has been with the Walt Disney Company since the early days of Disneyland, working his way up from dishwasher at the Plaza Inn to assistant manager at Club 33. A backstage job board announcement from WED Imagineering (predecessor to WDI) led him to Imagineering, where he still started at the bottom dusting models and arranging conference room chairs. His art background combined with mentorship from Imagineers, many of whom Walt Disney handpicked, led him to a position as a show writer. Some of his most recent work was on Cars Land at Disney California Adventure. He reflects on the time when he used to stand in the cast parking lot and dream about the future of Disneyland; almost in the exact spot where he would daydream (and meet his wife) is where the Cars Land courthouse now stands.

The diversity represented on the panel was good to see, and I enjoyed hearing each person speak about his or her path toward and work at WDI. Each panelist was clearly enthusiastic and passionate about the work.

Moderated by Don Hahn (producer, Beauty and the Beast), this panel included Sara Colt (director and producer of American Experience: Walt Disney), Becky Cline (director, Disney Archives), and Neal Gabler (author, Walt Disney: The Triumph of the American Imagination). Colt discussed the process she used to develop the four-hour documentary film that will air over two consecutive nights (September 14 and 15) on PBS. The filmmakers worked closely with the Walt Disney Archives team, however there was no editorial control given to the Walt Disney Company. This independence allows the film to take an honest, objective look at the life of Walt Disney while humanizing him for a younger generation who aren't as familiar with his work. 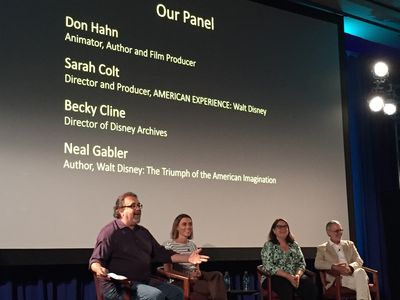 The filmmakers worked to get firsthand accounts of what it was like to work with Walt Disney; footage of interviews with Marty Sklar, Bob Gurr, Rolly Crump, and Richard Sherman was among the preview material shown to the D23 Expo audience. Sarah Colt was able to spend several hours with Diane Disney Miller at the Walt Disney Family Museum getting a personal tour of its collection, but her planned interview was not completed before Miller's death. The film will also feature home movies shot by Art Babbitt while he worked as an animator for Walt Disney that have only recently been made available by Art Babbitt's widow. 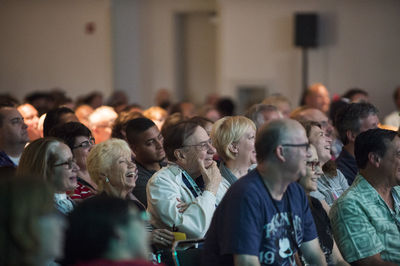 Richard Sherman looks on from the audience during the "American Experience" panel. Photo ©Disney.

Another clip shown to the audience highlighted the importance of Snow White in cinematic and animation history, and the high anxiety that Walt Disney experienced around its premiere. He was incredibly concerned that it wouldn't be well received, but Snow White turned out to be one of the most successful animated films ever made.

The second part of the series starts after the 1937 artists' strike and failure of Fantasia, when Walt Disney was feeling somewhat disillusioned with animation. It's at this point where he starts to turn his focus toward theme parks and the creation of WED. In addition, Walt Disney is at the forefront of television, working to strike a deal with ABC, the then third place network, that essentially bankrolled the $5 million dollars needed for the creation of Disneyland.

After attending this session, I'm even more excited to see this PBS documentary. Walt Disney's persistence and stubborn optimism (both terms used often during the panel) made him a tough businessman who wasn't always easy to get along with, but it's hard to argue with the results he generated.

If you've never attended a presentation given by historian Stacia Martin, you're missing out; she is a delight. In this session at the Walt Disney Archives Stage, she shared selections from her extensive private collection of Disney vinyl. It was a fantastic aural journey, including a reach back to the Danish origins of the classic "Hi to You" song that was often performed by the Mouseketeers. 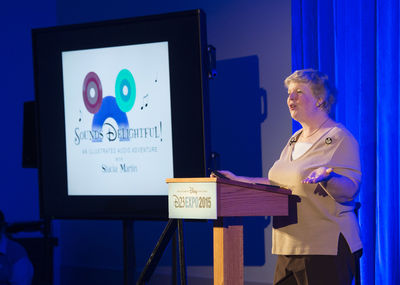 Martin's research on the historiy of the tracks she presented was woven among the musical interludes, and made the hour session fly by much too quickly. I regret getting shut out of her later session Disneyland: Fond Memories of the Past. Next time I will be sure to queue early enough to get in to her sessions.

Aimed at those who weren’t able to attend D23 Destination D at Walt Disney World last year, this session presented two highlights from that event. Historian Dave Smith covered Walt Disney World’s beginnings (“The Way We Were”) and Imagineer Jason Grandt presented “Retro Re-Rewind” discussing some attractions of Yesterland as well as Easter eggs currently in place on some newer additions at the Magic Kingdom.

Smith’s presentation included some fascinating photos from Walt Disney World’s construction, showing what a drastic transformation the area has undergone with the construction of Magic Kingdom, and the parks and resorts that followed. 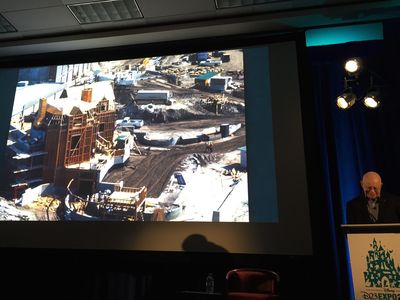 Dave Smith shares a photo of the Haunted Mansion under construction, which shows the transition from the exterior to the show building. Photo by Stephanie Wien.

Imagineer Jason Grandt brought his signature wit, sharing the concept of “environmental narrative” that is the backbone for theme park design. Environmental narrative focuses on what you see and when you see it, subtly directing the guest’s attention where the designer wants them to look instead of elsewhere. Easter eggs are another favorite Imagineering item. During the recent redesign of the Town Square Theater, the Imagineers placed references to extinct Magic Kingdom attractions on the postage stamps in the mail slots of the room you enter right before you are ushered in to see Mickey. Inside Mickey’s magic show dressing room, the Imagineers added references to Disney animation’s many magicians, including Madam Mim, Merlin, Presto, Hoodunit, and Timothy. See if you can spot them the next time you visit. 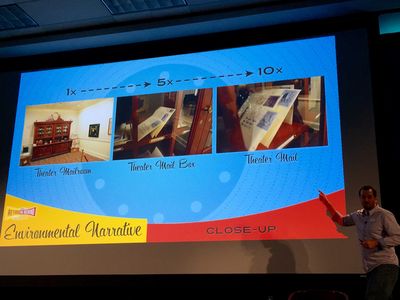 This year's D23 Expo solidified my view that the real value of the event is in the smaller sessions held by the Imagineers, historians, archivists, and artists involved in the nitty gritty of creating, presenting, and preserving. Hearing them share their stories with such excitement, you can't help but feel more connected to the material they present. Now when I visit Walt Disney World, I'll remember the photos of its construction and the Easter eggs hidden within. When I visit Disneyland, I'll recall the time Orlando Ferrante visited and had a picnic on the as-yet-unfinished hub. The wealth of history shared during this one weekend are enough to keep me going at least until the next Expo, where I'll skip the big hall for a more intimate trip down Disney memory lane.