Computer Glitch or Vandals? Some Fast Runners Moved to Slowest Corrals in Half Marathon

Whether due to a computer glitch or vandals with ill-intent, a number of runners in this past weekend's Disneyland Half Marathon discovered that their proof-of-time did not match what they had submitted, leading fast runners who typically get assigned to corrals A or B, to be placed in the slowest corrals.

Could this have been due to a computer glitch, or something more nefarious?

Unlike past races, where proof-of-time information was a field in the online race registration form, the Disneyland Half Marathon introduced a new method. The race registration form did away with the proof-of-time field altogether, and all registered participants were instructed to go to a special online proof-of-time submission form, where they were told to enter their full name, birthdate, and the name, date, and finish time of a previous race as proof of time. In the past, runners who improved their finish time in another race after they had registered for a runDisney race had to submit an email; with this new online proof-of-time form, the idea was to standardize the submission information, and provide runners with an easy way to continue updating their proof-of-time information all the way up until the last day of submission.

This new form was a great idea, in theory. Unfortunately, the form lacked some very basic security measures, the biggest being the lack of any sort of login/password requirement. Anyone could submit a proof-of-time for any registrant, as long as they had the runner's basic information. Worse, when someone else updated this information, the registrant never received a confirmation email to acknowledge that a new proof of time had been submitted.

Because of this, many people assumed everything was fine with the submission they made, and never knew anything had gone awry… until they found out their corral placements was not what they expected.

One victim of this proof-of-time switch is Karen Chu. Known for her elaborate race costumes, Karen is a fast runner. After she registered for the Dumbo Double Dare to race in both Saturday's 6.2-mile 10K and Sunday's 13.1-mile half-marathon, she followed the official instructions by submitting the form to Disney with her proof of time of 2:07 for a previous half-marathon she had run. With this time, knew she would be in one of the faster corrals.

Karen was thus puzzled, when runDisney announced race bib availability and corral placement, that she had been assigned to the very last corral. "I thought it was weird that I was in (corral) H when I'm usually an A or B," Karen said. She immediately contacted the runDisney race registration officials at TrackShack to figure out what was going on, and it was at this point that she received some startling news: TrackShack asked if she may have written a typo in her proof-of-time submission, because the information they had from her form showed a proof-of-time of 3:59, almost twice as slow as the time she'd submitted. 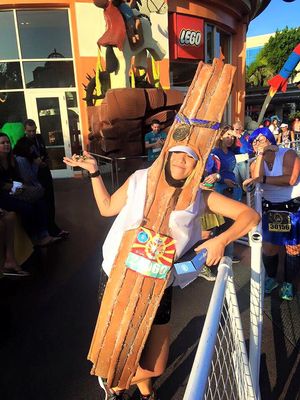 Dumbo Double Dare participant Karen Chu is known for her elaborate and clever race costumes, including this larger-than-life-size churro for the Disneyland 10K this past weekend. Karen's original proof of time was "overwritten," and she had to have this corrected. Her race bib shows an official sticker indicating her corrected corral placement. Photo courtesy of Karen Chu.

Fortunately for Karen, TrackShack was very prompt and friendly in helping her correct the "error," and she chalked it up to some odd hiccup. When Karen went to pick up her bib at the race expo, they put an official sticker on her bib to show that she was formally placed corral B, rather than in corrals E for the 10K and H for the half-marathon.

Karen grew suspicious, however, when she discovered that a friend of hers—also a fast runner who is typically assigned to corral A or B—had entered a similar "error" with a slow time that placed her in corral H.

According to Karen, she never received a confirmation email when the form was updated. And because anyone with a person's birth date could submit a fake proof of time, there is no way to tell until participants get their official bib assignment if they are in their appropriate corral. Karen suspects that someone decided to play a prank on her and her friend by moving them to the back of the pack, but was satisfied with the quick correction from race staff.

Karen was not the only victim of this "prank." Another victim was runner Louis Blanco, along with his brother, and his brother's wife. When the bib numbers were released, he saw that instead of the A corral that he expected, they had been moved to the back. Louis says he contacted TrackShack, and discovered that their proof-of-time information had been changed from "1 hour and something to 3 hours and something,"

"From what I understand, the changes were made at or near the June 2 deadline, but I cannot confirm that. Anyway, at that point I knew someone was messing with us," Louis said.

Fortunately, as with Karen, Louis said TrackShack was very responsive and quick in helping. "They were very nice in making the correction. They just sent us an email to bring to the expo." Louis did ask them if they could provide him with the IP address of the person(s) that sabotaged their times, or whether they were taking the matter seriously and investigating these fraudulent resubmissions, but he says he did not hear back from them.

Another person who had the proof-of-time information incorrect with TrackShack was Matt Marcella, an administrator for the Team #runDisney Facebook group. He says he was among a number of runners for whom TrackShack did not have the correct proof of time. "A lot of runners, including myself, found that their proof of times were not properly processed in the new system that runDisney is using. The times showed slower that the proofs that were submitted. runDisney acknowledged that there was a problem with the new system and corrected the issue for these runners by placing them in the correct corrals." Matt said that he had not considered the time changes to be something other than a computer glitch, but acknowledges that there should be a way to protect people's proof-of-time submissions.

This could have a larger implication for the runDisney race community in general. If this was a computer glitch, how many runners were affected? After your deadline passes for submitting the proof-of-time form, you can no longer find out what your officially submitted time is. But what if this was, as runners suspect, a malicious act made by pranksters? The current method makes it very easy to downgrade faster runners into slower corrals, and not everyone will notice (until too late) that their corral assignment is wrong—especially for first-time runDisney participants who aren't familiar with the paces for the corrals. A person could file a fraudulent proof-of-time submission to purposefully move age group winners back, essentially eliminating a lot of their competition by cheating before the race even starts.

Regardless of reason(s) or the perpetrator(s), we recommend that you do these three things to reduce your chances of being a victim of any downgrading sabotage:

Things runDisney and TrackShack could do to minimize such incidents:

But could this have happened to more than these runners? Did this happen to you? If so, when did you find out about the problem? How was your experience?

[We attempted to contact runDisney for a response, but they were unavailable over the holiday weekend.]