The Vacation Kingdom of the World: Dining at the Grand Floridian

Disney's Grand Floridian Beach Resort and Spa, the flagship Walt Disney World Resort, has a reputation for luxury, opulence, and superior service. It also has a reputation for being very expensive. Dining here can deplete the vacation budget in a hurry. For example, a dinner for two at Victoria and Albert's can set you back $300, with an additional $130 if you choose to enjoy wine with your meal.

Nonetheless, a surprising number of reasonably priced dining options are available here as well, featuring lovely settings with picturesque views at every turn. When travelling with a family, these three dining locations offer good food at good prices with some of the best Disney service found anywhere on property.

One of our family traditions is to enjoy one character meal per visit—typically the character meal offered at our resort. This summer, we enjoyed a wonderful breakfast at 1900 Park Fare, the character dining location at the Grand Floridian. The dining room's pastel-colored stripes, patterns, and paints is splendid. It is decorated with four fanciful carousel animals, and the walls are adorned with imaginative artwork featuring these animals, beach scenes, and other turn-of-the-century themes.

Like most character meals, 1900 Park Fare features table service beverage orders and a "help-yourself" style buffet. The breakfast items here are typical of Disney buffets, which is by no means a bad thing. There are special offerings designed for children including cheesy scrambled eggs, breakfast pizza, and Mickey Mouse waffles. For everyone else, 1900 Park Fare offers traditional fare like bagels, pancakes, scrambled eggs, French toast, hash browns, biscuits and gravy, bacon and sausage, and oatmeal.

There are a few surprises here: eggs Benedict and lobster eggs Benedict, potatoes O'Brien, crushed avocado, and hand-carved hickory-smoked ham to name a few. The Floridian Strawberry Soup is one of this location's signature dishes, and it was a hit with everyone in our family. There's a fresh fruit station, as well as a few tempting sweets: the bread pudding with vanilla sauce was great. 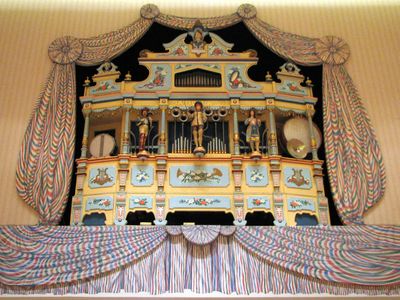 The highlights of our visit, however, were the character interactions. Ours was the first seating of the morning, so we had the special treat of entering with Mary Poppins herself while the lovely Irwin Kostal-arranged Mary Poppins overture played in the background. Mary Poppins was "practically perfect in every way," quoting the film's dialogue, asking how the kids might "measure up" and which of them was "more inclined to giggle."

Alice stopped by next, and her bubbly chattering was quite a contrast with Mary Poppins' more "prim and proper" interactions. My sons asked Alice, "Where's your cat?" With a twinkle in her knowing eyes, she informed them that Diana was quite well and back in the English park where she belonged, thank you very much for asking. The Mad Hatter arrived next, all foolishness and blunder. He had my sons in stitches. When they asked him if he had any mustard for their breakfast food, he replied, "Mustard? Mustard? Let's not be silly!" just as they hoped he would.

To conclude the very "classic British literary character" theme, that "willy, nilly, silly old bear," Winnie the Pooh himself, arrived for a brief visit and a number of hugs. One of the most enjoyable aspects of this particular meal was the unhurried, relaxed feeling of the entire affair. Unlike Cinderella's Royal Table in the Magic Kingdom, where the various courses arrive so quickly that there's rarely enough time to enjoy them, 1900 Park Fare allowed us to slow down and relax. And after all, isn't that one important aspect of a "jolly holiday?"

The setting, characters, and breakfast specialties made this a very memorable and unique character dining experience. Reasonably priced at under $17 for children and under $30 for adults (seasonal pricing varies), this meal comes highly recommended.

A step above the average self-serve resort food court, Gasparilla Island Grill offers a wide range of choices on a convenient 24-hour operating schedule. Named for a fictitious pirate who plays a prominent role in the children's pirate cruise, Gasparilla Grill offers ample seating both inside and outside where guests may enjoy a meal or a quick snack.

For kids, there are the standard Disney meal choices: peanut-butter and jelly, cheeseburgers, plus a unique vegetable wrap. For grown-ups, there's a surprising number of choices to accompany the standard burgers, chicken sandwiches, and salads one might expect. For example, the Boursin cheesesteak sandwich, the chicken cordon bleu sandwich, and the corned beef and Swiss panini are all very good.

However, there are two sandwiches that are the real stand outs. First is the Cuban panini, modeled on the classic Cuban sandwich of roast pork, ham, and Swiss cheese all on Cuban bread. Second is the Grand Gaspy Burger, which features a burger piled high with pulled pork, Tillamook Cheddar, barbecue mayonnaise, and fried onions. There are more than fifteen other entrees to choose from, so there's truly something for everyone.

The desserts are varied and good, especially the gourmet cupcakes. The s'mores cupcake was our favorite, followed closely by the blue-frosted Frozen-inspired cupcake. 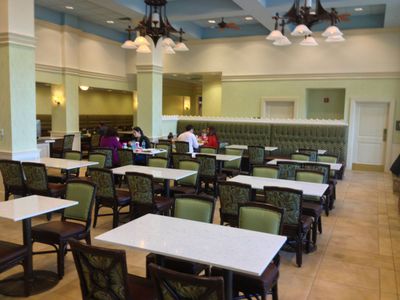 After placing an order, guests are invited to find a table; meals are delivered by friendly and accommodating cast members. While the inside dining area is open and somewhat characterless, the outside areas offer relaxing views of the Grand Floridian docks. Gasparilla Grill may not break any new ground in themed dining experiences, but for a quick-serve, cafeteria-style location, it more than exceeds expectations.

We enjoyed another fine lunch at the Grand Floridian Café, a charming establishment located just off the lobby of the main building. With its huge windows and sweeping views, the Grand Floridian Café is another location that fulfills the Disney goal of transporting guests to another time and place. It's a sprawling establishment, but its many nooks and crannies make it seem intimate and cozy. The service here was superb and our lunch enjoyable.

During our lunch we tried some of the Café's specialties. The seasonal salad was as refreshing and tasty a starter as one could envision with local greens and a house-made vinaigrette dressing. The open-faced café sandwich was an interesting mix of warm ham, turkey breast, bacon, and tomato smothered in a rich Boursin cheese sauce and topped with fried onion straws. The orecchiette pasta of the day with pan-roasted chicken breast was incredible: zesty and filling. The original Cobb salad is another fine choice. 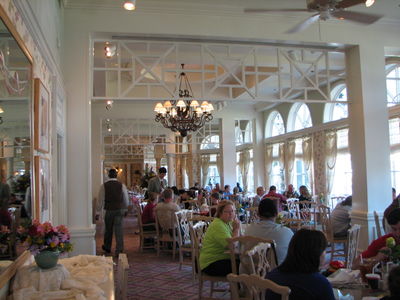 Seating for the Grand Floridian Cafe is full of natural light from its large exterior windows. MousePlanet File Photo by Brian Bennett.

For dessert, we suggest the Grand Floridian Dessert Sampler which includes all sorts of wonderful choices including a fresh berry tart, a chocolate timbale, and a strawberry cheesecake. There's also a solid milk-chocolate Mickey Mouse. It's enough for two or more so be prepared to share. My sons loved the "Worms in Dirt" dessert which our hostess assured them was "dug up fresh every morning out by the beach."

Prices range from $12.99 to $18.99 for most lunch entrees, and even the desserts were reasonably priced. Best of all, the atmosphere, food choices, and location truly embody that difficult-to-define classic Walt Disney World feeling.

Is the Grand too "Grand"?

I have a friend who avoids the Grand Floridian and its eateries because she fells that it's all just too upscale to be comfortable. While there's no denying that the Grand Floridian is, well, "grand" in the best sense of the word, it is also relaxed, comfortable, and very inviting. For guests planning a visit to the Vacation Kingdom of the World who want a taste of this world-class resort, try one of the dining options above and see if you agree.