Season of the Force at Disneyland: Dates and Details

Season of the Force debuts November 16 at Disneyland

Today's breaking news about the construction-related closures of the Disneyland Railroad, Fantasmic, and the Rivers of America attractions was actually the second story in a Disney Parks Blog article providing official dates and details of the Season of the Force promotion that will begin November 16 at Disneyland. [Read the full MousePlanet story here.]

While you're making plans to catch the final performances of Fantasmic before its year-long hiatus begins next January, you can also schedule a stop in Tomorrowland to take in the Star Wars: Season of the Force offerings. 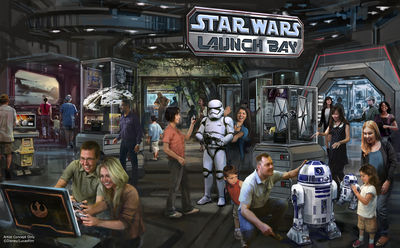 The Star Wars Launch Bay is a highlight of the Season of the Force promotion at Disneyland. Photo © Disney.

The highlight of the promotion is the Star Wars Launch Bay, currently under construction in part of the former Innoventions building in Tomorrowland. Star Wars will occupy most of the lower floor of the building, with the Avengers remaining on the upper level.

From Disney's description, it appears that the outer ring of the building will be devoted to a series of four galleries, featuring props, costumes and concept art from around the Star Wars universe:

Not to be left out, Disney Interactive will have a piece of the Launch Bay real estate, with a demonstration of Disney Games. Gamers can play park-exclusive Toy Box levels of Disney Infinity 3.0, which should prove popular with the annual passholder crowd. From building permits filed with the city of Anaheim, we also know there will be at least one gift shop inside the Star Wars Launch Bay. 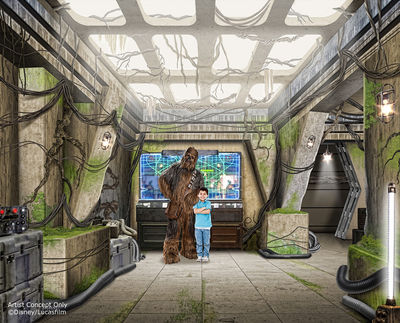 Visitors can meet Chewbacca or Darth Vader inside the Star Wars Launch Bay as part of the Season of the Force promotion. Photo © Disney.

Jedi Training: Trials of the Temple

The popular Jedi Training Academy show will be updated in December to include characters from the Disney XD series, Star Wars Rebels. We previously reported that Disneyland tried a two-day test of enrolling potential Padawans in the morning, rather than picking them at the start of each show. If the park decides to implement this change, we'd expect it to begin with the debut of the new show.

Disney will reopen the Tomorrowland Theater during Season of the Force, and present "favorite scenes from classic Star Wars films." We can't be the only ones wondering why Disneyland isn't offering a "sneak preview" trailer of the new Star Wars: The Force Awakens, at least until the film opens on December 18. 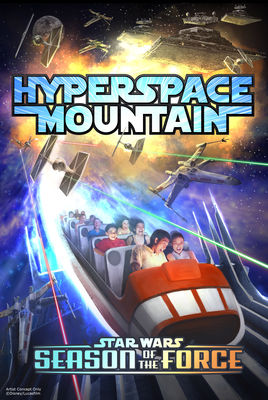 Hyperspace Mountain opens at Disneyland on November 16 as part of the Season of the Force promotion. Photo © Disney.

Disneyland's latest attraction overlay debuts November 16 when Hyperspace Mountain opens. Disney says you will "climb aboard a reimagined Space Mountain attraction, in which guests will join an X-wing starfighter battle."