Frontierland 2016 should revive some unpleasant memories for those who recall 2004, when Disneyland was turned into one giant construction zone with workers scrambling to fix up the neglected in time for the 50th anniversary celebration.

As soon as Disneyland closes for the evening on January 10, 2016, the construction walls will start going up, boarding off the back section of Frontierland to make way for the new Star Wars Land. First, the backstage Circle D Ranch and (hazardous) waste and recycling center will have to be relocated, followed by land clearing, so groundbreaking on new construction can begin no later than the start of 2017.

The primary obstacle to work around will be the Disneyland Railroad, which currently passes right through the middle of the new land and will have to be shut down for at least into 2017 to reconstruct its route and presumably build a tunnel so it doesn't distract from the Star Wars theme.

In addition, the Rivers of America and all of its entertainment will be closed nearly all of next year, as well.

"Circle D and the disposal area are right on the other side of the berm near the Rivers of America entry point," explained one cast member. "Access to the River will be severely restricted because the main entry point crosses the train tracks behind the Festival Arena. Behind the Arena is the drydocks for all the Fantasmic floats and support boats. It also has a slipway for anything that needs to be pulled out of the water."

In the meantime, shows, exhibits and modest ride updates will have to sate guests' appetites for something new. We're about six weeks away from the opening of the Star Wars/Marvel-ized Innoventions, but those who've peeked inside say there's still not much to see: "The building is pretty much empty, but fixed up and ready for the Star Wars stuff to be moved in as well as more Marvel."

Star Wars merchandise now comprises about 80 percent of the retail space inside the Star Trader. When Episode 7 arrives in theaters December 18, clerks expect it to take over the entire store (prices were already hiked—toy lightsabers, for instance, recently rising from $21.99 to $24.99).

Another Round for Cosgrove

Joe Cosgrove, the longtime Club 33 member who is suing for reinstatement, fights on. Since we last left our intrepid octogenarian, Disney has responded to his claims by denying all charges. They've also filed to have his case, originally filed in Los Angeles Superior Court, transferred to Orange County. Disney's motion is scheduled to be heard October 15.

As readers of my new book The People v. Disneyland: How Lawsuits & Lawyers Transformed the Magic will know, this is Disney's reflexive response to nearly all L.A.-filed suits. For while plaintiffs have a low chance of beating Disney in an L.A. courtroom, the historic odds of having their suit make it to court and receive a favorable verdict against the Mouse in O.C.? Barely two percent.

The Latest from the Jungle

For those of you looking to get a little more Jungle in your life, we've got three news items to report:

First, yours truly is featured on the latest installment of the "Tales from the Jungle Crews" podcast, discussing lawsuits, Mickey, and more. 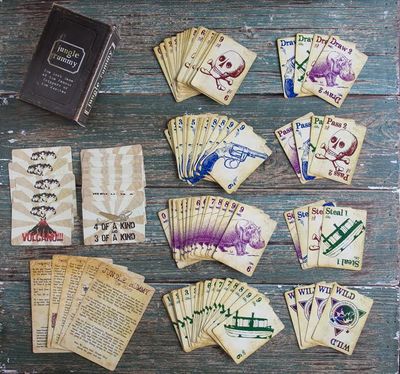 Jungle Rummy is a new Adventure-inspired playing card game from the creators of the "Tales from the Jungle Crews" podcast.

I've seen the first set, and the cards and box look sensational, all professionally produced—and the game sounds like great fun. Check it out here for a preview.

And, third, this Sunday, October 4, mark your calendars for the return of the Skipper Stand-Up Show at the Brea Improv

Their first show at the Improv was a virtual sell-out, so buy your tickets early!