Disney recently held a press event at Disneyland to celebrate the upcoming home release of Tomorrowland. The guests of honor were people deemed to be "Disney dreamers," innovators within the company and those who worked on the film. The group included Tomorrowland writer/director/producer Brad Bird; actors Raffey Cassidy and Thomas Robinson; Imagineer Charita Carter; and Mike Goslin from Disney Consumer Products. 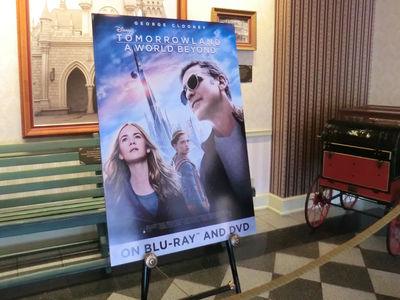 The family adventure Tomorrowland takes dreamers of all ages on a journey beyond their wildest imaginations. A group of optimists try to save the world from impeding doom in a movie that takes the idea of, "If you can dream it, you can do it" to heart. Tomorrowland is now available on Blu-Ray Combo Pack, DVD, Digital HD/SD, Disney Movies Anywhere, and On Demand. Photo by Katie Metzger.

Contributing writer Katie Metzger had an opportunity to talk with each of the dreamers to talk about the movie and their other projects.

Brad Bird, the director, writer, and producer of the film, has been an inspiration to many young dreamers around the world from his work on The Iron Giant, The Incredibles, Ratatouille, and Mission: Impossible – Ghost Protocol, in addition to Tomorrowland.

When it comes to dreaming, Bird said:

"People can accomplish amazing things and far beyond what they think they can accomplish… by getting up everyday and kind of driving towards something slowly but surely.

"Then there are all these other steps where you have to and you're going to encounter resistance, where things are going to be hard, and you have to push through those things but you can get to this other place that you want to get to."

This concept of dreaming being only step one is an important theme of the film. "Part of the idea of the film is Tomorrowland is a destination but it's over there," said Bird. "You're not automatically, you can't automatically, be in it. You have to be implanted with the vision of it and then you have to drive toward that vision."

Although he got his start working in animation, Bird also enjoys working in the live-action medium. He believes there are fewer differences between the two than what many people believe. About both mediums of storytelling, he said:

"Animation is much more precise, which means there are also more ways to screw up because you don't have and you can't do coverage on a scene and then cut it five different ways. It's more exact than live action in terms of if you want a raindrop to land right on somebody's nose you can do it right on the frame you want it to be. But it's less spontaneous than live action. Live action is a spontaneous medium and accidents can happen that really help a film.

So as long as you understand that and change the way you do it a little bit for each, you can take advantage of what is great about each medium."

When asked what he believes to be the most overlooked theme in the film, Bird said:

"I think one thing that was misinterpreted was that the film was saying that apocalyptic stories are bad and that we shouldn't have apocalyptic stories… But what we were trying to say was not 'those [apocalyptic] movies are bad; you shouldn't see them,' but it was more to say that can't be the only kind of story that we can tell… a negative vision of the future is not the only credible vision of the future. There also is this other one that is not getting enough airplay."

Bird did not stop long after completing Tomorrowland before moving onto his next project. Currently, Bird is writing the script for the much-anticipated Incredibles 2. Although he could not reveal much about the sequel, he said, "I'm having fun playing with the Incredibles play set again and we're at work on it and we don't have a release date. We're in early days, but we have a good story that we think we like and we're moving forward." Although this sequel may be far into the future, thanks to the themes of Tomorrowland, dreamers can agree that the future does look bright.

Raffey Cassidy and Thomas Robinson, who play Athena and Young Frank respectively in Tomorrowland, are not only dreamers, but are also living out their dreams at incredibly young ages. 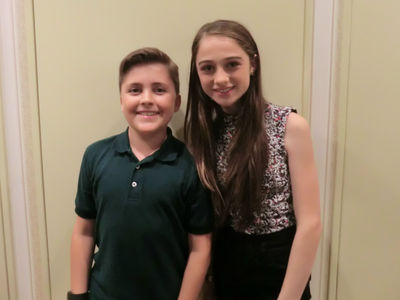 When Robinson first found out he was cast as the younger incarnation of George Clooney's character Frank Walker, his first thoughts were of the stunts. He was excited to do the stunts and they became his favorite on-set memory.

Cassidy said that doing anything involving the (chroma key) green screen with the production of the film was easy. She said Brad Bird created such a vivid picture of what was going on around them that it was not hard to imagine they were really there.

For the film, which had an astounding 90 different set and location combinations, both actors traveled extensively. Both especially loved the filming inside of the Disney theme parks, Cassidy citing that Space Mountain and California Screamin' became fast favorites.

However, Robinson shared the dark side of this. In the film, Young Frank rides it's a small world.  During the shooting of the scene, Robinson said he had to ride the attraction numerous times without any of the iconic Sherman Brother's music as the dolls moved their mouths in complete silence. Because of that, the ride that used to be one of his favorites now holds a creepy connotation for him. 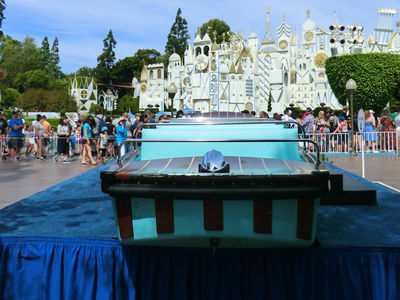 The prop boat used during filming of Tomorrowland at Disneyland was displayed outside of "it's a small world." Photo by Katie Metzger.

Both actors loved the experience of working on Tomorrowland. Cassidy said her favorite memory of the filming was the family that was formed by everyone involved on the film and the memories they have together. The whole film family loved making the movie and adding it to the pantheon of classic Disney films. When asked who they would give an Optimist pin to, both actors chose Disney characters: Cassidy chose Mike Wazowski from Monsters, Inc., while Robinson chose Hiro Hamada from Big Hero 6.

In describing Tomorrowland in one word, Robinson said "Dreamy" and Cassidy said "Optimistic."

The young actors both agree that there are important lessons for people their age to get out of the film. "An individual can do anything they set their mind to," said Robinson. Cassidy added, "You, as one person, can make a difference."

Charita Carter, a producer at Walt Disney Imagineering, knows firsthand what being a dreamer is all about.

"I define a dream as really a kind of a vessel that houses your hope and aspiration and they're things that we should have and we should pursue," says Carter. She adds, "I often tell people that the endgame is really finding your destiny. So your dream should lead you to your destiny."

Carter says that being a dreamer has led her from starting as an accountant at Imagineering to working her way to the creative side, where she is now the senior creative producer and development manager of the Scenic Illusion team.

She went on to say, "We're the team that will test something. We'll mock it up and we'll see what works and our goal is to be able to create something new in terms of a method or technique."

Examples of technologies her group has rediscovered and changed with modern advancements include the projections used for Pirates of the Caribbean: The Legend of Captain Jack Sparrow and the recently implemented overlay in the Indiana Jones Adventure. Currently, she is working on an unannounced project in Japan.

For young dreamers hoping to someday be Imagineers, Carter offers this advice:

"I would say to start out with what you really want to do and follow our passion. You want to really understand what makes you tick, what gets you excited, what gets you up.

"Even if you don't see an immediate application for that, I would still say follow that passion because I think, as we go into the future, there will be so many roles and opportunities that don't exist right now that will.

"The other thing I would encourage… is find like-minded people and kind of have your support group, your cheerleaders if you will, because there will be times that you'll really believe in yourself and there will be times where you kind of doubt it. It's really good to have people who believe in you and are willing to be your cheerleader and get you through those seasons."

"Try to expose yourself to as much as possible. You might have a certain course that you're going down, but as different opportunities present themselves, even if they weren't on your radar, be open. Be open to pursuing them, because you never know just what that critical mass of experiences that will lead to something else." 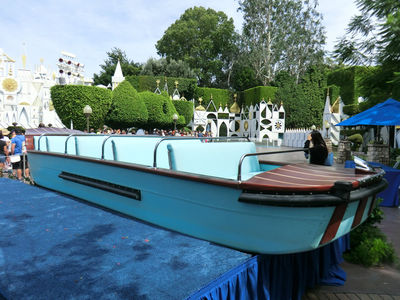 Disney displayed the "it's a small world" boat prop used during filming of the movie at Disneyland. Photo by Katie Metzger.

Part of being open is to be exposed to new ideas and to learn from any source material, including films. "Just one of the messages I gleaned from the Tomorrowland film, this idea that we can impact and we have an impact as individuals on our future and bringing that into fruition, I think is really strong," says Carter. "I think that optimism and that sense of being empowered to have that impact is really important for young people to really grasp as they go through their day to day pursuits and knowing that even if it doesn't seem major, even small impacts collectively add up and they can change an environment and change the future."

Mike Goslin is vice president of production and content at Disney Consumer Products. Currently hard at work on the new Playmation system, he is bringing on a new age of interactive games for families.

Goslin implements this idea of being a dreamer into the new Playmation system. He says, "It's a collection of toys and wearable devices that all connect with each other, but also to the Internet, to allow us to deliver a new kind of play experience."

The first product in the line is an Avengers-themed system. According to Goslin, "We're going to give kids superhero powers for real in the real world. So what that means is we're going to let you put on Iron Man's gauntlet and battle robots and help the Avengers save the world from Ultron."

This will surely be on many kids' holiday wish lists, since they will be able to team up with their favorite superheroes. When describing more about how the active play system works, Goslin said, "We're doing this with lighting effects and immersive audio, primarily. We do have an app that is its companion, but you don't need the screen. It works perfectly fine since all the technology is imbedded in the toys themselves."

Playmation, which works both for children and adults, will have follow-up games based around the Hulk, Star Wars, and Frozen.