Disneyland doubles up the entertainment schedule for Thanksgiving week | Testing new Fastpass technology in Tomorrowland | Here comes the Spider-Man | Disneyland Resort Hotel offer for Spring 2016 | This and that... | Crowd Forecast

Disneyland doubles up the entertainment schedule for Thanksgiving week

Disneyland visitors will have two chances to see the "Disneyland Forever" fireworks every night during the peak Thanksgiving week of November 21–28, according to the Orange County Register, although the official entertainment schedule posted on Disneyland.com does not currently list the second show.

The second fireworks show would be in addition to daily double doses of A Christmas Fantasy parade, Paint the Night parade, and Fantasmic scheduled that week, and most weekend days during the Holidays at Disneyland Resort promotion (November 13 through January 6). 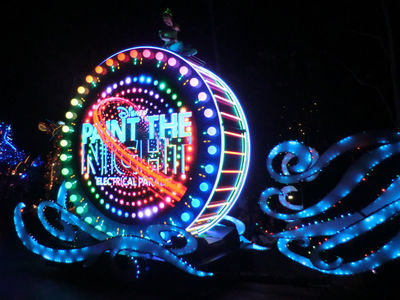 Disneyland visitors will get two chances to see most of the nighttime entertainment offerings during the peak Thanksgiving week, including the Paint the Night parade. Photo by Adrienne Vincent-Phoenix.

The Register says the second show would be presented at 6:30 p.m., after the second Christmas Fantasy parade, and before the first Paint the Night parade. The article quotes Disneyland Resort spokeswoman Suzi Brown saying, "Adding more entertainment options enhances the experience for all our guests during this popular time of year."

As is typical. Disneyland hasn't released information about the Candlelight Processional, but sources have told us the performances are on December 5 and 6, at 5:30 p.m. and 7:45 p.m. each night. The entertainment schedule shows two performances of A Christmas Fantasy parade that afternoon (1:00 and 3:15 p.m.), and two performances of the Paint the Night parade that evening (8:50 and 10:45 p.m.).

A Fastpass test conducted at Space Mountain last week has us wondering how soon we might see MyMagic+ or MagicBands at the Disneyland Resort. The test took place Tuesday, Wednesday, and Thursday, with two different versions of Fastpass tested.

On Tuesday, readers at Disneyland reported that they received a normal Fastpass ticket at the kiosks as usual. When they returned to ride, they were directed to scan the barcode on their ticket at a temporary kiosk installed in the return line.

On Thursday, readers reported that their Fastpass tickets had an embedded RFID (radio frequency identification) chip in the ticket instead of a printed barcode. When they returned, they tapped the Fastpass ticket against the temporary reader, similar to the way Walt Disney World visitors tap their resort ID cards or MagicBands to use the Fastpass system.

What does this all mean for Disneyland visitors? We've been waiting to see how Disney would adapt the billion-dollar MyMagic+ program for the Disneyland Resort. The Los Angeles Times quoted Disneyland vice president Mary Niven as saying in May that MagicBands would not be coming to Disneyland, citing a different visitor demographic from the Florida resort, which has used the devices since 2013. Still, the "no wristbands" remark doesn't mean that Disneyland can't and won't include some other elements of the technology, perhaps going to paperless Fastpass using barcodes or RFID chips in admission tickets and annual passports.

Such an offering would likely require the rollout of a Disneyland version of the My Disney Experience smartphone application currently offered for Walt Disney World. The Florida-specific app allows visitors to make, track, and change their Fastpass reservations, and takes advantage of free in-park Wi-Fi, a service Disneyland does not yet offer.

Come share your thoughts about this test on our MousePad discussion forum.

And Big Brother has arrived. RFID in the new Space Mountain fastpasses. Let's just hope it doesn't lead to full on Magic Bands.

Spider-Man makes his first appearance in a U.S. Disney theme park next month, according to the Disney Parks Blog. The webslinger, who has previously appeared in person at Disneyland Paris, will be featured in a temporary meet-and-greet at the Tomorrowland Expo Center. David Koenig has more about this highly anticipated debut, and the unfortunate consequence for another Marvel hero, in his MousePlanet blog. 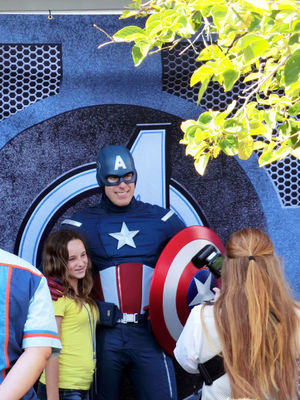 Captain America may return for the runDisney Avengers Half Harathon weekend, but he won't be part of the starting lineup in Super Hero HQ. Photo by Adrienne Vincent-Phoenix.

When Innoventions—er, I mean the Tomorrowland Expo Center—opens November 16, the second-story Super Hero HQ will be missing a superhero.

After 20 months on the job, Captain America will be on hiatus until just before the premiere of the film Captain America: Civil War on May 6, 2016. In his place will be the heavily publicized debut of Spider-Man.

The benching of Captain America has cast members scratching their heads. The only thing they can come up with is budgetary concerns, since the lion's share of the Expo's budget is going to the Star Wars exhibits—and collectible store—on the first floor.

If fans of the First Avenger wish to see him before he goes, drop by the park by November 8.

Although Iron Man had been expected to be appearing at Disneyland by now, reportedly the owners of Hong Kong Disneyland will be opening an Iron Man flight simulator attraction (similar to Star Tours) and demanded exclusive rights to have the costumed character at their park.

The other thing you won't see at the Expo is the building moving. Sadly, during this current rehab, much of the mechanisms that made the building rotate were removed. And if you're curious why, check out that hot new book, The People v. Disneyland:?How Lawsuits & Lawyers Transformed the Magic.

We shared last week information from our partners at Get Away Today Travel about a Disneyland Resort hotel offer for Spring 2016. Sue from Small World Vacations let us know that Disney Visa cardholder can book this offer before it goes public on October 28.

Disney Visa cardholders can book through their travel agent, or by calling 866-285-1578. You can also visit the Get Away Today website, or call 1-855-GET-AWAY for a quote.

...Disney has filed for a building permit to expand the Blue Sky Cellar in Disney California Adventure. The permit references a "DVC expansion," so it looks like the Disney Vacation Club will take over the space. The permit covers a new patio cover, low retaining walls, and lighting.

...The Fossil store in Downtown Disney is closed for refurbishment through October 29. 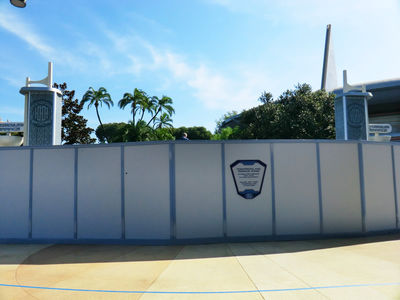 Jedi Training Academy reopens November 20 with a new show, as part of the Season of the Force promotion. Photo by Adrienne Vincent-Phoenix.

...Jedi Training Academy is closed through November 19 because of the Tomorrowland Terrace stage construction.

...Van Eaton Galleries is hosting an opening reception and preview of their upcoming "Collecting Disneyland" auction this Thursday, October 29. The auction is Saturday, November 21, with the consigned items on display at the gallery through November 20. You can view the auction catalog online, a 280-page trove of paper goods, props, costumes, ride vehicles, and more.

...The Merchandise Events schedule has been updated with events through November, though we expect additional appearances and releases to be to be added to the schedule. 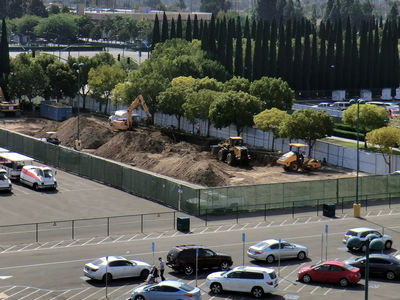 Work continues on a refueling station for the Disneyland trams in the Pinocchio parking lot outside the Mickey and Friends parking structure. Photo by Adrienne Vincent-Phoenix.

...D23 members can purchase tickets to the "Light Up the Season with D23" event to be held Friday, December 4 at the Walt Disney Studios in Burbank. The two-hour event offers members the opportunity to visit the Studios lot, shop at the Studio Store, and dine at the Buena Vista Cafe. Photo opportunities, character meet-and-greets and an appearance by Santa are all included.

Note: Not all of attraction closures have been officially confirmed by Disney, and are all subject to change at any time. Refurbishment schedules are estimates only. We recommend checking for updates as you plan your visit. All information is subject to change without notice. To get the most recent updates, visit Disneyland.com – this information is no longer available from the automated phone service. 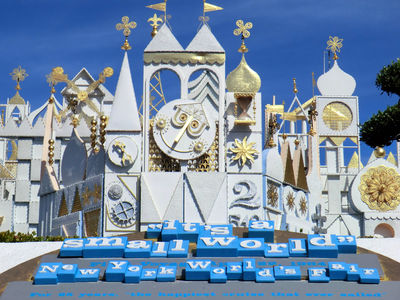 "it's a small world" is closed for installation of the holiday overlay. Photo by Adrienne Vincent-Phoenix.