Epcot's Soarin' attraction will halt service as of January 4, 2016, the Disney Parks Blog announced last week. The ride will reopen sometime in "summer of 2016" as Soarin' Around the World, with a new ride film that will "take guests on a journey to far-flung lands."

Soarin' is the twin to Soarin' Over California at Disney's California Adventure, and opened in 2005. The 5-minute simulated hang glider ride currently offers a tour of California destinations, from Big Sur and Monterey to Palm Springs and Disneyland. The current film features a score by composer Jerry Goldsmith.

The new Soarin' Around the World film is expected to be similar to the Soarin' attraction created for Shanghai Disneyland, and include both domestic and international destinations.

Four new celebrities join the previously-announced list of narrators for the 2015 Candlelight Processional at Epcot. The new narrators are journalist and television host Meredith Vieira; actress America Ferrera; actress Chandra Wilson; and actor Daniel Dae Kim. All four have ties to Disney and/or ABC - Vieira hosted "Who Wants to be a Millionaire;" Ferrera starred in the show "Ugly Betty;" Wilson stars in "Grey's Anatomy;" and Kim starred in "Lost."

Reserved viewing for the Candlelight Processional is available to people who book a Candlelight Dining Package, with breakfast, lunch and dinner options. Any remaining seats are filled on a first come, first serve basis, though you can usually snag a spot in the standing-room-only viewing area.

Lunch packages are $37.99-$60.99 ($14.99-$21.99 for children) and dinner packages are $51.99-$79.99 ($17.99-$33.99), with price depending on meal and restaurant. The package includes an appetizer, entree, dessert and non-alcoholic drink at table service restaurants, or a full buffet at The Garden Grill. Each member of the party will also receive access to the reserved Candlelight Processional viewing area, and also reserved viewing for the Illuminations fireworks show.

Restaurants, meals and pricing is detailed below. Call (407) 939-3463 to book, or visit the Walt Disney World website to book online.

The dish on dining changes

Following a menu update at Pecos Bill Tall Tale Inn & Café, which replaced the former burgers-and-fries fare with TexMex staples, it seemed unlikely that Tortuga Tavern would continue to offer its own Mexican menu. As expected, Tortuga Tavern last week debuted a new selection of sandwiches and salads, with the sandwiches built on thick Texas Toast.

Starting January 4, Minnie Mouse and friends will host Minnie's Seasonal Dine at Hollywood and Vine. This follows on the popularity of Minnie's Holiday Dine, which runs November 7, 2015 – January 3, 2016. According to Disney, Minnie's seasonal dinner parties will each feature seasonal music, decor, costumes, and menu. While no specific characters were listed, the holiday dinner includes appearances by Mickey Mouse, Donald Duck, Daisy Duck, and Goofy.

Disney Junior Play ‘n Dine is still offered during breakfast and lunch. Reserved seating can be added to Minnie's Seasonal Dine, based on availability.

In 2015, Disney offered Jedi Mickey's Star Wars Dine during Star Wars Weekends. Disney has not said if that offering will return in 2016.

This Thanksgiving dinner offers a choice of carved turkey or pot roast, with traditional side dishes and desserts.

Special entertainment is planned, including character meet-and-greets and themed photo opportunities with a souvenir photo for each family.

The meal is served Thanksgiving Day, Thursday November 26, from 3:00 to 5:00 p.m. in the Fantasia Ballroom of Disney's Contemporary Resort hotel. Reservations are required, and can be made now through Friday, November 20, 2015, or until the event reaches capacity. Call (800) 800-9800 to book through member services—the Disney Dine Line cannot make reservations for this meal.

Belle and the Beast host this Christmas Eve event, which features a holiday buffet menu with traditional entrees, side dishes and desserts, plus a kids buffet and a create-your-own hot chocolate station. Diners will receive a souvenir family photo with Belle and the Beast. The event will include live musicians and magicians.

The meal is served Christmas Eve, Thursday December 24, from 3:00 to 5:00 p.m. in the Fantasia Ballroom of Disney's Contemporary Resort hotel. Reservations are required, and can be made now through Thursday, December 17, 2015, or until the event reaches capacity. Call (800) 800-9800 to book through member services—the Disney Dine Line cannot make reservations for this meal.

DVC members and their guests can attend special holiday mixers in Epcot throughout the season. The free events include character meet-and-greets, live entertainment, crafts, and refreshments. They are hosted from 3:00 to 5:00 p.m. in the World Showcase at Epcot (entrance is between the Canada and United Kingdom Pavilions).

Members do not need tickets or advance reservations, and can bring up to 6 guests per membership card. 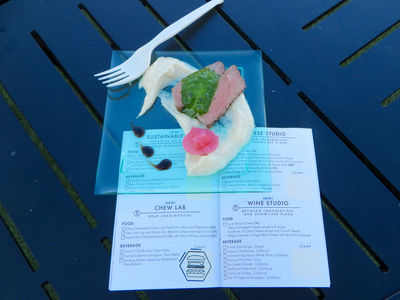 Like most of the food kiosks at the 2015 Epcot International Food & Wine Festival, portion sizes at one of this year's new kiosks, the Chew Lab, are merely "tastes" but tend to be rather tasty. Pictured here is the New York Strip Steak. Photo by Alan S. Dalinka. 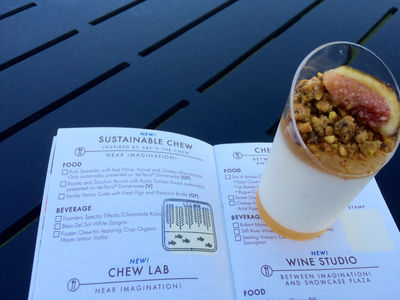 Vanilla panna cotta with fresh figs and pistachio brittle is one of the tastes offered at the Sustainable Chew kiosk. Photo by Alan S. Dalinka. 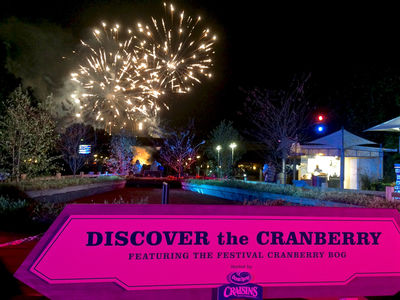 Illuminations: Reflections of Earth lights the sky beyond the Cranberry Bog at the 2015 Epcot International Food & Wine Festival. Photo by Alan S. Dalinka. 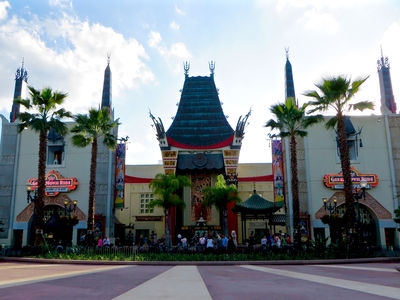 A slightly raised area that is guest-accessible is now open in front of the Chinese Theater at Disney's Hollywood Studios. Photo by Alan S. Dalinka. 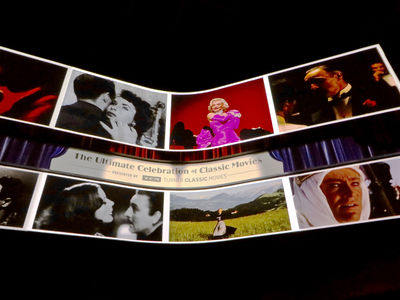 A new display of changing images promoting Turner Classic Movies has been added just after the movie montage on The Great Movie Ride at Disney's Hollywood Studios. Photo by Alan S. Dalinka. 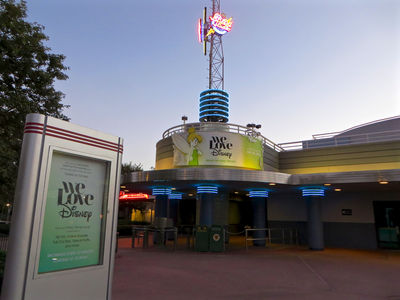 A preview promoting the upcoming album release of "We Love Disney" is presented in the ABC Sound Studio at Disney's Hollywood Studios. Photo by Alan S. Dalinka. 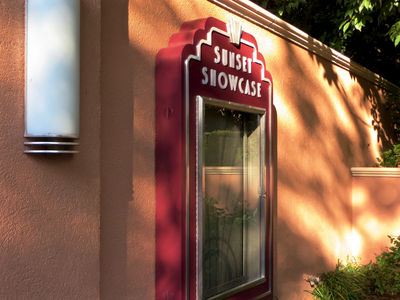 A theater-style lobby sign has been added to one of the walls near Rock 'n' Roller Coaster for the newly constructed Sunset Showcase flexible space theater next door at Disney's Hollywood Studios. Disney recently announced that "Club Disney" will open in the theater in December. Photo by Alan S. Dalinka. 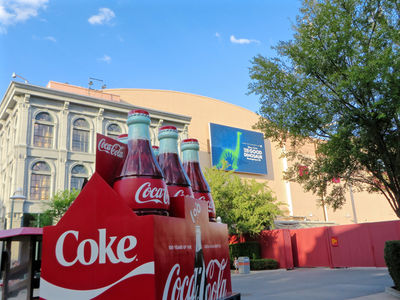 A billboard promoting the upcoming Disney Pixar film "The Good Dinosaur" is in the backlot area of Disney's Hollywood Studios. Photo by Alan S. Dalinka. 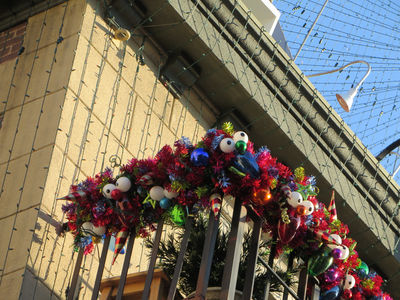 As the holiday season approaches, the final presentation of the Osborne Family Spectacle of Dancing Lights installation nears completion on the Streets of America at Disney's Hollywood Studios. Photo by Alan S. Dalinka. 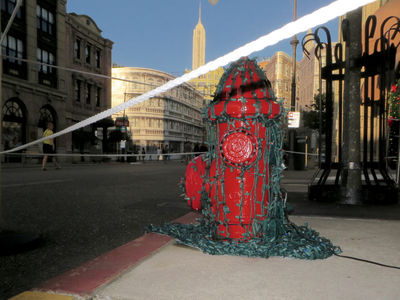 During the day, the Osborne Family Spectacle of Dancing Lights lose some of their impact, but after dark this hydrant will spring to life. Photo by Alan S. Dalinka. 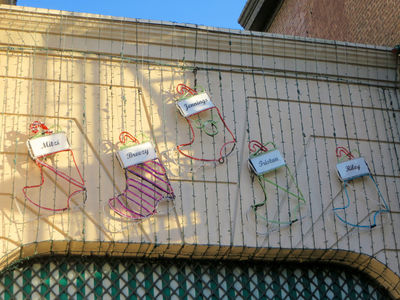 The Osborne Family Christmas Stockings adorn a building on the Streets of America for the last time. Photo by Alan S. Dalinka. 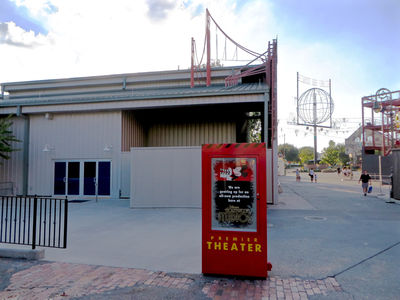 Hopefully, the holiday season will bring another run of the Comedy Warehouse Holiday Special at The Premier Theater at Disney's Hollywood Studios. After the holiday season, it is likely the theater will be torn down for the construction of the Toy Story and Star Wars Land expansions at the park. Photo by Alan S. Dalinka. 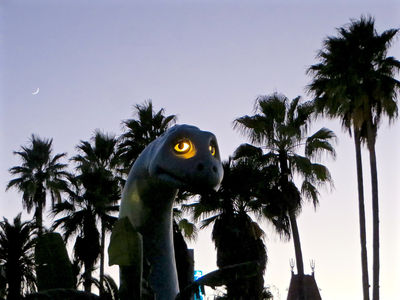 Gertie the dinosaur (ice cream stand) at Disney's Hollywood Studios contemplates what changes may come to this area of the park after the holiday season. Photo by Alan S. Dalinka. 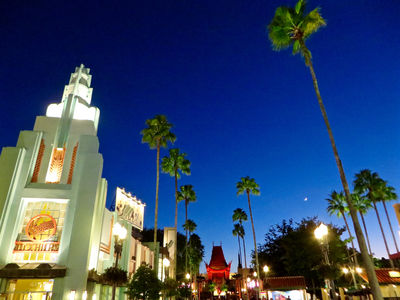 Though some miss the Sorcerer's hat, its removal has given Disney's Hollywood Studios more of the appearance of "The Hollywood That Never Was But Always Will Be." Photo by Alan S. Dalinka. 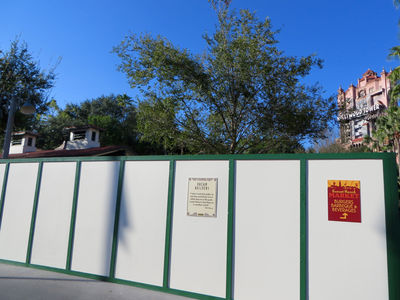 Parts of the Sunset Ranch Market on Sunset Blvd. at Disney's Hollywood Studios are now behind construction walls. Food items from the closed locations are available at other locations and Fairfax Fare and Hollywood Scoops Ice Cream remain open. Photo by Alan S. Dalinka.

...To encourage multiple visits to the 2015 Epcot International Food & Wine Festival by Passholders, a commemorative port wine glass is available (while supplies last) to each Passholder who returns three separate days and collects specific stamps in his or her Food & Wine Passport. (Pass, Passport, and photo ID required for each stamp and gift.) 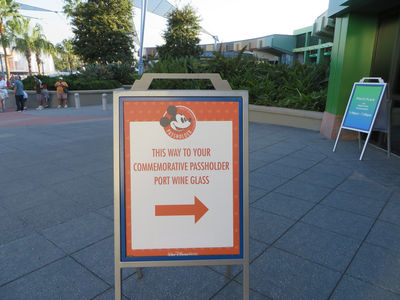 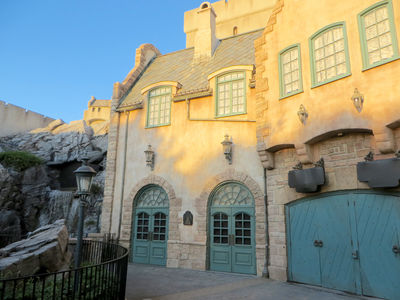 There is still no external evidence of the Frozen ride to come at Epcot's Norway pavilion. Photo by Alan S. Dalinka.