Two holidays passing in the night | Entertainment notes | Candlelight rumors | It's time to make dinner (reservations) | Ghirardelli pop-up shop to open in Downtown Disney | This and that... | Crowd Forecast

Two holidays passing in the night

This week marks the start of the holiday transition for the Disneyland Resort, as holiday garland replaces fall foliage around the parks, and a Christmas tree replaces the great Mickey pumpkin in Town Square. In reality, the holiday swap began even earlier than this—the Downtown Disney Christmas Tree and the start of the Winter Village were installed last week, and Mickey's Halloween Party guests trick-or-treated past winter garland in Toontown Saturday night. 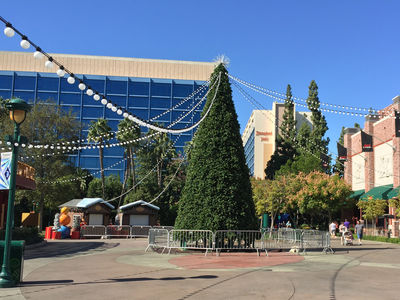 The Downtown Disney Christmas tree was installed last week. The ice rink will be installed after the tree is decorated. Photo by Adrienne Vincent-Phoenix. 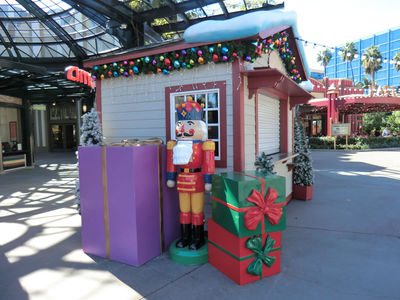 The buildings of the Downtown Disney Winter Village are in place. Photo by Adrienne Vincent-Phoenix.

This weekend, November 6–8, is when Disney is expected to film the West Coast portions of the Disney Parks Christmas Day Parade. The performances are usually taped on Friday and Saturday, with Sunday reserved as a back-up day in case of weather. Filming is always subject to change without notice; do not make a special trip just to see the filming.

We have confirmed with Disney that this will be the entertainment schedule presented nightly during the Thanksgiving peak week, November 21 – 28, 2015:

Visitors will be able to choose whether to get a Fastpass for World of Color – Winter Dreams or the 60th anniversary Celebrate! version.

If this extended entertainment schedule produces the results Disney managers hope for, expect to see a repeat during the two peak weeks of the Christmas tourist season.

If the (reliably sourced) rumors are true, Disneyland's 2015 Candlelight Processional will be narrated on Saturday, December 5 by actress Geena Davis, and on Sunday, December 6 by Once Upon a Time actress Lana Parrilla.

Davis has narrated the Candlelight Processional at Epcot, but this would be her first time behind the podium at Disneyland. This would be Parrilla's first time to narrate the show at either Disney resort.

Sources tell us the show has been revamped for this year, with new songs and arrangements. The performances are at 5:30 and 7:45 each night.

Correction: An earlier version of this article stated that the first performance of the Paint the Night parade would take place between the two Candlelight shows each night. The correct parade times are 8:50 p.m. and 10:45 p.m., with the first parade stepping off from "it's a small world."

Disney has not yet made any official announcements regarding the 2015 Candlelight event, and everything should be considered rumor until confirmed.

It's time to make dinner (reservations)

As of yesterday, Disneyland Resort dining reservations are open for the remainder of 2015. If you haven't already booked meals for your upcoming holiday trip(s), this is a good week to get everything nailed down before holiday fever sets in. Here are some key dates to keep in mind:

After Apricot Lane closed in Downtown Disney in January, the space was divided into two units, with Disney Vacation Club taking half of the space. It's long been rumored/expected that Starbucks would use the other space to open a second location the company said would be built in Downtown Disney, but there's been no visible progress on the space. 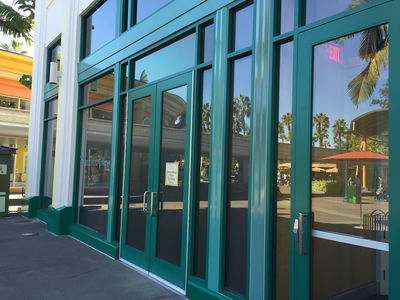 This vacant space in Downtown Disney will become a Ghirardelli pop-up shop during the holiday season. Photo by Adrienne Vincent-Phoenix.

Last week, we learned that Ghirardelli will open a pop-up chocolate shop in that space. The shop opens sometime this week, and will remain open into January. This is a chocolate shop only—not a soda fountain ice cream outlet. It's still unclear whether this location will eventually become the second Starbucks, or if that plan has been scrapped.

...Soarin' Over California is closed through November 12 for refubishment. This was a last-minute addition to the schedule. 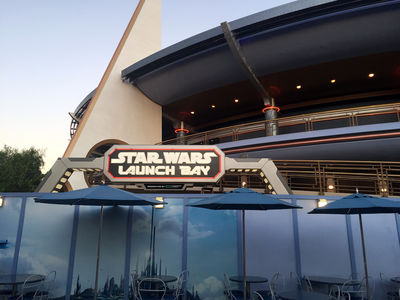 The sign for the Star Wars Launch Bay is in place outside the Tomorrowland Expo Center, formerly known as Innoventions. Photo by Adrienne Vincent-Phoenix.

...A new bridge structure appeared in New Orleans Square last week, and is generating a lot of buzz and speculation. The structure, dubbed by some as the "bridge to nowhere," is near the Mint Julep Bar on the back side of the French Market restaurant, and spans the walkway known as Front Street. On one side, it connects to an employee access staircase on the side of the French Market building. On the other side, it currently leads to the New Orleans Square Railroad station platform. 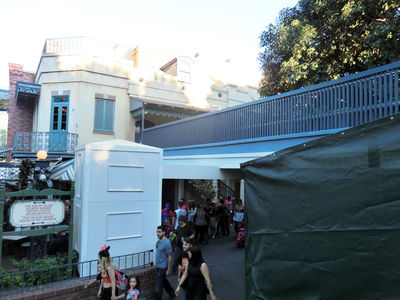 A new bridge in New Orleans Square connects the French Market building with the railroad station. Photo by Adrienne Vincent-Phoenix.

Still, that doesn't explain the need for a bridge over the railroad tracks, or over Front Street, for that matter, unless the tracks and/or Front Street will become impassable in the near future. 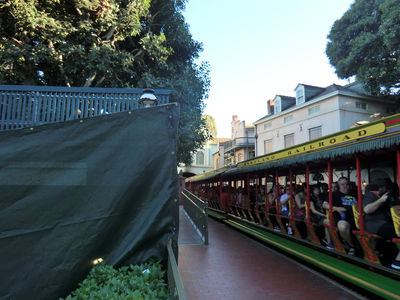 The new bridge may be extended to span the Disneyland Railroad tracks, but for now it just crosses Front Street. Photo by Adrienne Vincent-Phoenix.

Note: Not all of attraction closures have been officially confirmed by Disney, and are all subject to change at any time. Refurbishment schedules are estimates only. We recommend checking for updates as you plan your visit. All information is subject to change without notice. To get the most recent updates, visit Disneyland.com – this information is no longer available from the automated phone service.