Sometimes being a Disney fan makes you an instant depository for everyone else's unwanted Disney stuff. Some people's Disney trash is certainly other people's Disney treasure, for example the item that I'm going to discuss today. Once upon a time some years ago, my sister-in-law was doing some spring cleaning and wisely decided it was time to throw away all of their old videotapes. The digital revolution had definitely made VHS tapes nothing more than clutter on most people's shelves. On her way to the trash bin, she did, however, put aside a few things for me, her Disney obsessed family member. One of them was this little piece of history that she had received for free almost 20 years ago. 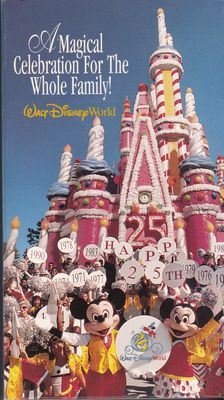 For years now Disney has been sending potential guests vacation planning videos. They're essentially a sales pitch to explain what all the fuss is about and show off whatever's new at the most magical place on Earth. For most people, it's a one-time view to help you make your decision on whether or not you want to make the pilgrimage to the most popular tourist destination on the planet. For others, like yours truly and I'm sure many of you out there, it's a priceless snapshot of a particular time period in Walt Disney World history. These videos are a professionally produced time capsule. If you were there at the time, they help you to reminisce. If you weren't there at the time, you can learn a lot about what your favorite place in the world was like 20 years ago and how dramatically it's changed.

This calendar of events from 1997 was included in the VHS box. ©Disney Enterprises. 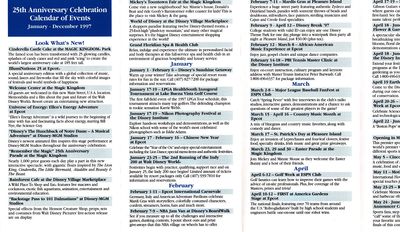 A close up of the calendar shows the early 1997 events in more detail. ©Disney Enterprises.

In 1996, Walt Disney World began a nearly two year long 25th anniversary celebration with quite a bit of pomp and circumstance. While most people may remember their infamous decision to turn the most photographed icon in the world, Cinderella Castle, into a candy covered, Pepto Bismol pink birthday cake, there were many more new things to take notice of during this grand celebration. For example:

That alone is a fairly impressive list of new attractions, redesigned lands and even a whole new resort, dining and shopping area on Crescent Lake adjacent to Epcot.

As you watch the video today—yes, I actually just watched it on an actual working VCR that I still have here in the basement—you're struck by what's featured that has since disappeared from Walt Disney World. For example:

The Disney Studios (as it's referred to in the video)

Let's not forget Pleasure Island, The Disney Institute, and River Country. So much has changed in 20 years. When you watch the video you not only realize what's been lost but what hadn't yet been added. For example:

So many of the these things that have become staples of even the casual Walt Disney World visitor weren't even a thought yet when this tape was being shipped home to families in 1996-97. It just goes to show you how much and how frequently things change.

I really enjoy looking at tapes like this, not too mention DVD's, brochures and travel magazines from Walt Disney World's storied history. It was fun to watch this tape with my 13-year-old boys. I realized how much of these things I got to see and experience that they never will and how many newer things that they just assume have always been there.

Seek out these tapes if you can find them. If you don't have a VCR anymore (and let's face it, you probably don't) there are plenty of them posted on YouTube nowadays, such as this one. Don't forget to check the bins at garage sales and flea markets. People can't wait to get rid of these old tapes and DVDs. Or maybe, you'll get lucky like I did and get a little piece of bona fide Disney history handed to you.

You begin to appreciate just how much of a living, breathing, and forever changing thing Walt Disney World really is. It truly drives home Walt's original thoughts on Disneyland: that it would never be completed and that, "It will continue to grow as long as there is imagination left in the world."