So the wait is finally over. Star Wars has at long last returned to us and with original cast members to boot. Lord knows I've been waiting long enough for this monumental moment in cinematic history. The original Star Wars films arrived at the perfect time in my life. I was all of 9 year sold when Episode IV premiered and that was it—I was on board for life. It was a perfect age and time for Star Wars to hit. I soon had all the toys. I had the posters on my wall. I had the t-shirts on my back. Star Wars completely took over my friends and my life and it's never really loosened its grip since. My dad took me to see the first Star Wars movie back then and I vowed that I would take my boys and my daughter when and if another episode hit the theaters. I did just that on opening night and I've been smiling ear to ear ever since.

My wife, however, is admittedly not the Star Wars fanatic that I am. She remembers seeing the first film and has a vague recollection of parts of The Empire Strikes Back, but that's really it for her. On opening night, she did the responsible thing and stayed home to wrap Christmas presents and get ready for the oncoming holiday. We both knew that I would eventually want to go see it again and she would probably go with me then. It wasn't such a pressing need for her, but I had to go.

On the day after Christmas, we were in chill out mode and we embarked on a Star Wars Episode IV, V, and VI marathon to prepare her for the newly released Episode VII – The Force Awakens. When it all wrapped up, she had an interesting reaction. She enjoyed all of them but when they ended she asked, "Why do I need to see another one? This series ended well. Luke became a Jedi. He reconciled with and saved his father. The emperor was destroyed. It all tied up so nicely." I hate to say she has a point, but to be honest, she does have a point. Was there really a need to continue the storyline from the original trilogy?

I guess the difference between the two of us is time. Essentially, she just completed her first Star Wars experience this past weekend and was in no real rush to see another one. Me? I've been waiting for decades to see what has become of Luke, Leia, Han Solo, and Chewbacca. Time made me hungry. I've wanted another Star Wars film featuring the original crew since the closing credits of Return of the Jedi in 1983 when I was 15. Thirty-two years is a long time to wait. So, the question bodes… was Episode VII worth the wait? The answer is a resounding and emphatic, "Yes!" It was more than worth the wait. The Force Awakens is a movie miracle. It only took a matter of seconds to grab hold of me and transport me right back to the RKO Keith's Theater in Flushing, Queens where I saw the original. It's an old school Star Wars movie in all the best ways. I couldn't be happier with the end results. But as always, this is a countdown article, so let's take a look at my Top 5 Things to Love About Star Wars: Episode VII – The Force Awakens.

Please Note: This list is spoiler-free, so read on even if you haven't seen the film.

5 – The Millennium Falcon is Back 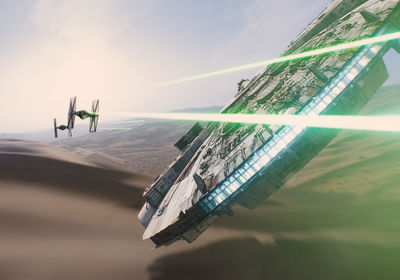 The Millennium Falcon as seen in "Star Wars: The Force Awakens." ©Disney Enterprises.

As far as onscreen vehicles go there are few as cool as Han Solo's Millennium Falcon. The Batmobile from the 1960s TV show or maybe James Bond's original Aston Martin from Goldfinger come to mind, but it's the Falcon's reputation as an ornery hunk of junk that defies all expectations and beats the odds to make it the coolest movie vehicle of all time. It's an underdog just like its pilot and we all know that everyone loves the underdog. When it first reappears in The Force Awakens, I admittedly got chills. The first time the Millennium Falcon takes to the skies once again for a classic Star Wars chase scene is an absolute cinematic roller coaster ride. What a blast it was to sit there and witness that. I felt like a kid all over again. The ship and its history add so much to the story it should be listed in the credits as a main character.

BB-8 screams across the desert planet of Jakku. ©Disney Enterprises.

The small rolling droid BB-8 is perhaps the true breakout star of the film. He (I think it's a he for some reason, not sure why) has achieved instant icon status in the Star Wars universe and beyond, much the same way the beloved R2-D2 did generations ago. There's good reason behind this. BB-8 was designed by director and newly ordained cinematic god J.J. Abrams. He is astonishingly simple—essentially a rolling ball and a half circle put together. He is physically real, not computer-generated. Obviously being the Disney and Muppet fan that I am, I've long been taken in by inanimate objects that magically develop a full-blown personality.

It's one thing to make a drawing of a dwarf come to life, or even a frog puppet. You have so much more to emote with in those cases. You have eyes, a mouth, and a voice to convey feelings. BB-8 is just a rolling ball with no real speech except beeps and blips, and no human features whatsoever. Yet it conveys more emotions, moods, and feelings than most real actors. BB-8 is instantly lovable and relatable. Best Actor in a Non-Human Supporting Role: BB-8 for sure. 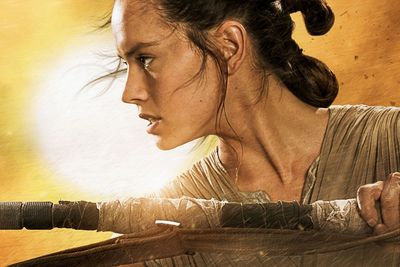 Sure, I couldn't wait for the original cast members to be on the screen. But, for the Star Wars universe to truly continue to inspire, it had to conjure up some new heroes. For me, Daisy Ridley's Rey hit the bull's-eye dead center. I was on board with Rey pretty much from the first moment I saw her. She's strong, smart, capable, intriguing, beautiful, fierce, and a dozen or so more adjectives that I don't have space for. To me, Rey represents the promise of the future installments in this series. I can't wait to find out more about her backstory, and I can't wait to see where and how she is going to take us through the upcoming films. 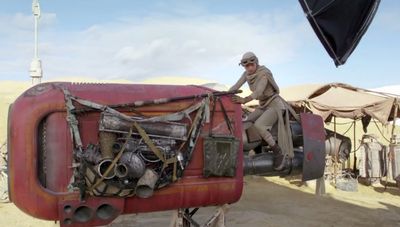 To quote C-3PO, "Thank the Maker." Thank you J.J. Abrams for having the wisdom to avoid over-using computer-generated effects and instead actually building things that we can all feast our eyes upon in your film. The world of Star Wars came alive in the original trilogy with minimal help from computers and much help from the props department. George Lucas broke new ground with set design, prop design, and use of models in the first three Star Wars films. The universe he created felt real because most of it was, in fact, real. The Force Awakens looks and feels real for the exact same reasons. It's a wonder to behold and a benchmark that more and more directors should strive for nowadays.

Han Solo and Chewbacca re-enter the Millennium Falcon after a long absence in "The Force Awakens." ©Disney Enterprises.

If you felt the same way that I did when you first heard and saw the "scene heard round the world" then you know why this took the number one spot on my list. "Chewie… we're home." Those three words caused so much joy in so many people when they were first revealed to us last spring. Even though we saw the Falcon flying through the skies in an earlier trailer. Even though we saw that photo of the original cast members sitting in that big circle for a read through of the script. Even though we knew Harrison Ford was indeed coming back as Han Solo. All of those facts meant nothing until that moment when we actually saw this famous duo on screen together again.

Even though I watched the "we're home" moment over and over online, I was still blown away by them actually being right there in front of me on the big screen. Instantly, I was nine and my childhood movie hero was on the screen in front of me. He was the same wisecracking, charismatic, "flying by the seat of his pants and hoping for the best" Han Solo that he was the first time around and it was so fulfilling to watch it unfurl. The truly fantastic thing is that we get so much Han and Chewie screen time in The Force Awakens. Not only are they back; they're back big time. These aren't cameos. Han and Chewie reclaim their place as, perhaps the greatest on screen buddies in the history of movies. It was so, so good to have them back.

As you can probably tell, I was beside myself with Star Wars: The Force Awakens. In my eyes it was perfect. It was everything I wanted and have been waiting for. The next two films can't arrive fast enough. I've never left Star Wars behind—not since I was that wide-eyed 9-year-old kid at the movies in 1977 watching in awe as all sorts of unforgettable movie magic unfolded on the silver screen in front of me. Now, so many years later, I get to go through it all over again, this time with my own kids along for the ride.

Star Wars has become multi generational and thanks to Disney, George Lucas, and geniuses like J.J Abrams, there's no end in sight to the wondrous stories that happened a long time ago… in a galaxy far, far away.