One of the best kept hotel secrets on Disney property is Disney's Coronado Springs Resort. Hidden along Buena Vista Drive, the resort is west of World Drive near Disney's Animal Kingdom. This quiet hotel doesn't seem to get much attention, but there's not anything in particular wrong with it—quite the opposite in our view. 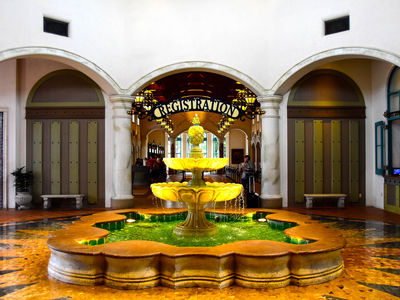 The main lobby of Coronado Springs sets the mood. When you enter through the main doors and first view this fountain, it's clear that you're about to enter the world of old Mexico and the Southwest. Photo by Donald Fink.

Coronado Springs is designed and themed after old Mexico and the American Southwest. We've had the pleasure of staying here a couple of times, and each time has been a remarkably relaxing experience. The pace seems slower than with other Disney hotels, and it's sometimes a welcome change.

The registration area of Coronado Springs certainly reminds us of the architecture used in the old California missions. Maybe it was just a senior moment, but it took Don several minutes to find the hidden Mickey in this scene. Photo by Bonnie Fink.

We've often read on user forums that Coronado Springs is too far away, or too remote to be considered as a possible destination hotel. We've found that the remoteness is largely irrelevant. When staying at a Disney hotel, we usually rely on Disney transportation for all our needs, and the distance then becomes simply a matter of time management. The truth is, if you go to Google Maps and look at the distances from Coronado Springs to virtually all the parks, its driving distance is not significantly different from many of the other Disney resorts. 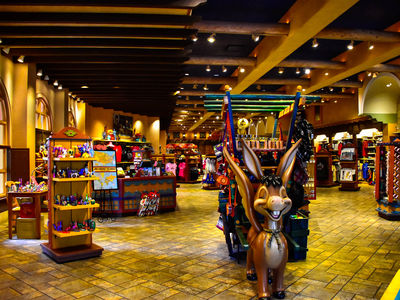 Panchito's Gifts and Sundries is a general merchandise store located in the El Centro area of Coronado Springs. They have gift items as well as necessities. Photo by Bonnie Fink. 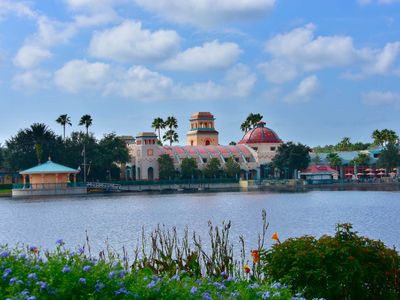 You can appreciate the old Mexico charm of Coronado Springs when viewing the El Centro area from across Lago Dorado. Photo by Bonnie Fink. 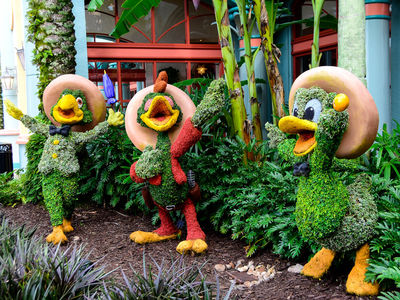 Jose Carioca, Panchito Pisotles, and Donald Duck (left to right) are a perfect fit in the gardens of Coronado Springs Resort. These topiaries represent the Three Caballeros from the film "Saludos Amigos." The characters are also featured on the Gran Fiesta Tour at the Mexico Pavilion, Epcot. Photo by Donald Fink. 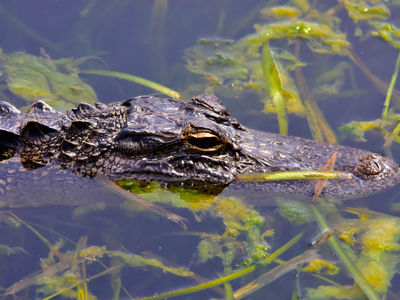 The wildlife is real at Walt Disney World. Here, a small American alligator is seen near the El Centro area. Guests were feeding him, so it won't be long before Disney will have to find him a new home. Photo by Bonnie Fink.

One thing that is a bit surprising is the quality of the food in the food courts of the moderate Disney resort hotels, and Coronado Springs is no different. We visited the Pepper Market for breakfast and were treated with the usual scrambled eggs, bacon, sausage, and a small Mickey waffle. It was more food than we needed and the taste was good, for a food court. There is Joffrey's Coffee in all the Disney hotels now, so the morning coffee was good too.

The food court at Coronado Springs is called Pepper Market. It's decorated with figures and colors from old Mexico and the American Southwest. Like many of the food courts on Disney property, the food is surprisingly good. Photo by Bonnie Fink.

The Pepper Market, with its colorful Mexican style tables and chairs, is a fun place to find quick service food at the hotel. Photo by Donald Fink.

We also had the opportunity to visit the two full service restauruants at Coronado Springs: Las Ventanas and Maya Grill. We had breakfast at Las Ventanas and it immediately went down on our list of best places on Disney property for breakfast. Whether you choose the cheese quesadillas with huevos and black beans or the sourdough French toast, you won't be disappointed. 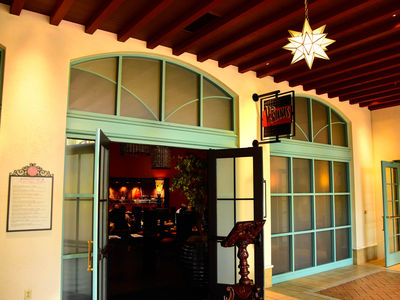 Las Ventanas restaurant is unassuming in its appearance, but the food can easily compete with some of the best restaurants on Disney property. Photo by Donald Fink. 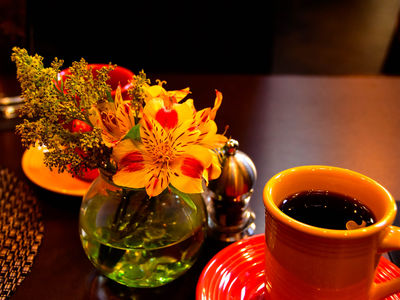 Las Ventanas restaurant is decorated in warm and inviting colors. The food is pretty good too. Photo by Donald Fink.

At the Maya Grill, we stopped in for dinner. This restaurant also serves Mexican food, but it's not what most of us have come to expect with a typical Tex-Mex menu. We tried the braised short ribs with mole sauce and menonita cheese. Our conclusion was that this restaurant can easily compete with any of the full service restaurants on Disney Property. If you're visiting Walt Disney World, either of these restaurants are worth a visit even if you're not staying at this resort. 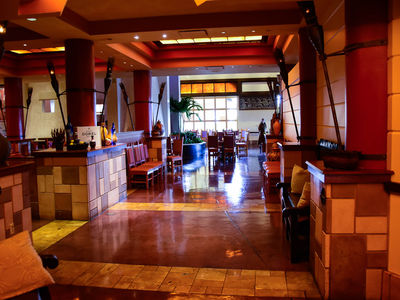 The Maya Grill at Disney's Coronado Springs is a Mexican style restaurant with a Mayan theme. Photo by Donald Fink. 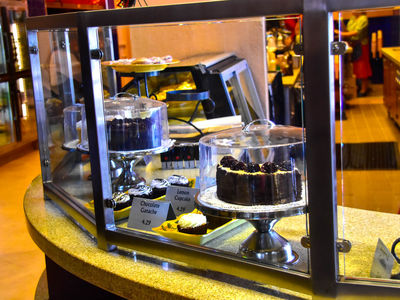 Cafe Rix, located near the main lobby, is a place to grab a quick snack. They offer many items, from hamburgers to gelato, and much more. Photo by Bonnie Fink.

There are three areas to Coronado Springs: The Casitas, the Ranchos, and the Cabanas. They're all located around a lake called Lago Dorado, but each area is distinct and has different architecture. As one of Disney's moderate resort hotels, the rooms are usually equipped with two queen beds, but there are other configurations and even a few suites. There is free Wi-Fi in the rooms as well as a flat-screen television. The rooms we stayed in had a refrigerator and a coffee pot. 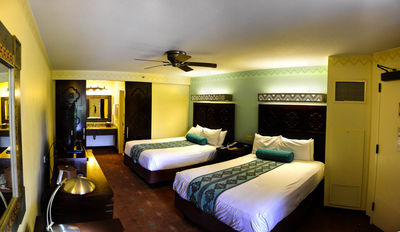 Typical rooms at Coronado Springs are what you would expect from a moderate resort. The rooms are usually equipped with a desk, flat-screen TV, and two queen beds. Single king beds are available is some rooms too. Photo by Donald Fink. 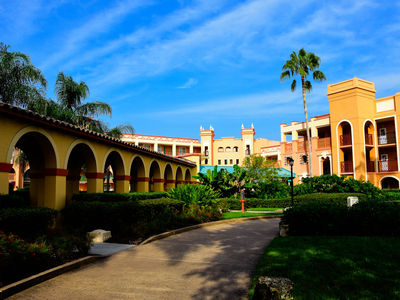 The architecture at Coronado Springs reminds us of the Spanish Missions throughout California. Photo by Donald Fink. 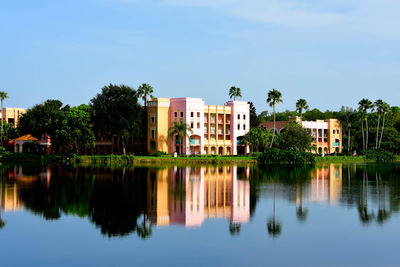 The Casitas reflect across the water of Lago Dorado in the morning. Photo by Donald Fink. 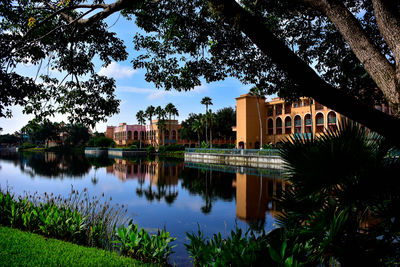 The Casitas area as viewed from across Lago Dorado, near The Ranchos. The Casitas are the rooms nearest the lobby. Photo by Bonnie Fink. 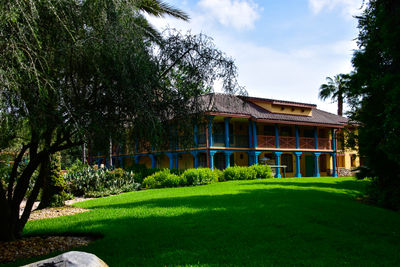 The Ranchos area, with its tile roofs and wooden pillars, is reminiscent of a southwestern ranch style home. Photo by Bonnie Fink. 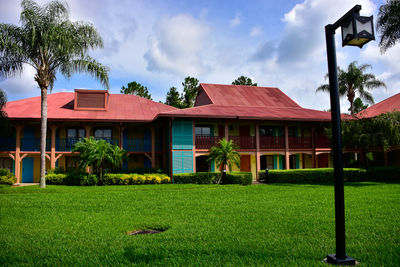 The Cabanas have more of a beachfront feel to them with tin roofs and posts that resemble simple wood framing. Photo by Bonnie Fink.

The main pool area at Coronado Springs is located across Lago Dorado from the El Centro Area. It's called The Dig Site and its main attraction is the Lost City of Cibola Swimming Pool. There's a fifty foot tall Mayan pyramid in the backdrop and guests can enjoy a 123 foot long waterslide. 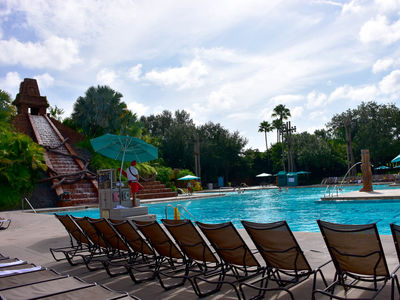 The main swimming pool at Coronado Springs is called the Lost City of Cibola Pool. Its backdrop is a fifty foot tall Mayan pyramid. Photo by Bonnie Fink.

The Dig Site is an active area with plenty to do. There's the swimming pool, a waterslide, several spas, arcade and of course a bar. If you're more interested in a quiet pool experience, each of the three room areas has a Leisure Pool. These smaller swimming pools have fewer amenities with a more relaxing and quiet atmosphere. 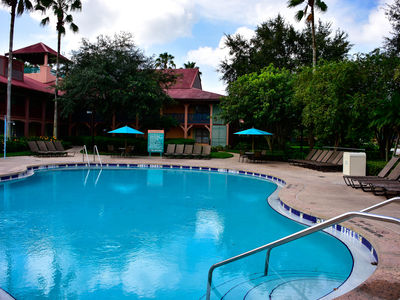 Like most Disney resorts, there are smaller pools with more private, intimate settings located around the property. This pool is located in the Rancho area and offers seclusion from the higher level of activities found at The Dig Site. Photo by Bonnie Fink. 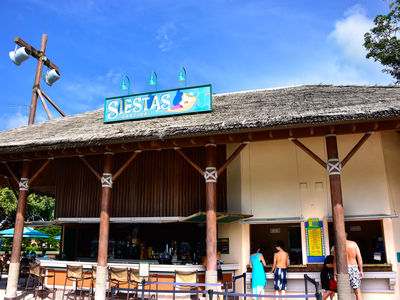 Siestas Cantina is the poolside bar at The Dig Site. Photo by Bonnie Fink.