Deep in the heart of Asia lies a unique dining experience, the Yak & Yeti Restaurant. Conveniently placed at the foot of Expedition Everest, its theming plays well with the overall motif of the land. Stepping through the ornately carved doors and into the pale blue building there was an immediate sense that something special was afoot. Twice we have tried to make reservations through the My Disney Experience App, twice it has shown no availability, and twice we have been able to walk in and have a table within fifteen minutes. Your experience may vary, but we suggest asking even if it shows completely booked.

If you ask or if you are just lucky, there are tables on the second floor that look out over Asia and nicely frame the bridge to the Tree of Life. Rarely have we had this magnificent a bird's eye view for people watching. 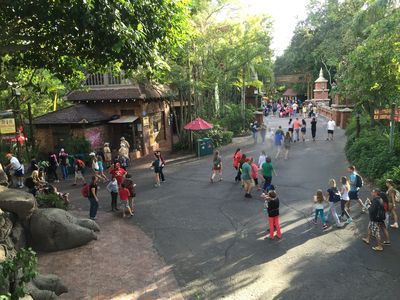 A splendid view of the coming and going of Disney's Animal Kingdom guests. Photo by Roan Poulter.

The interior of the Yak & Yeti is even better than the outside, with beautiful statues and dark wood beams that make it seem the restaurant has somehow always been there. The tables and chairs are similarly unique and beautiful. 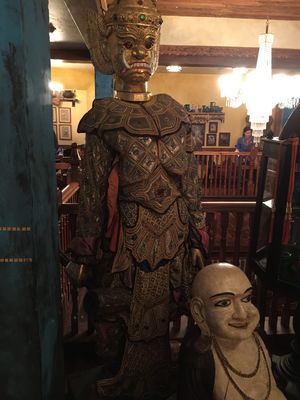 Opulent details abound as you make your way to your table. Photo by Roan Poulter

Once you are sitting at your table you may notice a seemingly out of place flyer for the Landry's Select Club to receive rewards and discounts. Honestly I thought someone must have left it at our table, but not true. The Yak & Yeti is in fact a Landry's restaurant. Being within the walls of a Disney theme park, this was unexpected, in a very delicious way.

Menus are delivered and drink orders taken, but if you're not careful, you might end up spending the next ten minutes learning about the legend of the Yak & Yeti from the backside of your menu instead of studying the food selections. The story is about a hotel on the footsteps of the Himalayas where travelers would stop on their way to Mount Everest. Study the food options and save a menu for reading after they've taken your order; the story will add a dimension of curiosity to your exit. 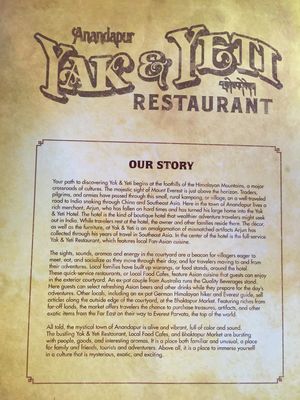 The story of the Yak & Yeti appears on the backside of the menu. Photo by Roan Poulter.

The menu is described as Pan-Asian cuisine. I'm not sure the last time you played Risk, but Asia is quite large and includes many countries. The menu covers a selection of Asian cuisines from countries including India, Thailand, Japan, China, and Korea. The children's menu is truly uninspiring with the classic burger, chicken finger, and Uncrustables selections.

Dim Sum Basket for Two – a nice little starter with pork pot stickers, shrimp siu mai, cha siu bao (steamed pork-filled buns), and pork siu mai steamed on a banana leaf, served with soy lime dipping sauce. This was gone so fast and so efficiently, I was only able to photograph the empty container. Each item had delicious and authentic flavor; the cha siu bao was incredible, with savory, sweet, and tender barbecue pork inside the bun. The portion size is rather small, so unless you're alone I wouldn#39;t order this expecting to be filled up. 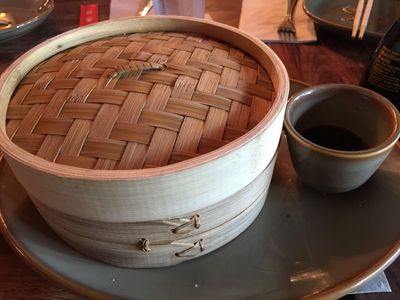 The dim sum is served in a bamboo steamer. Photo by Roan Poulter.

Lo Mein – Chicken – When my daughter requested this I rolled my eyes in frustration. Having suffered through a mountain of limp noodles in my lifetime, I only agreed reluctantly. What came out was good enough to change my mind on this dish. Fried lo mein noodles with crisp carrots, cabbage, green onions, and bean sprouts in just the memory of a sauce. A subtle garnishing of cilantro makes this really pop. You can request it hot, but that just adds Sriracha. We suggest asking for your own bottle for the table to spice it to your taste. 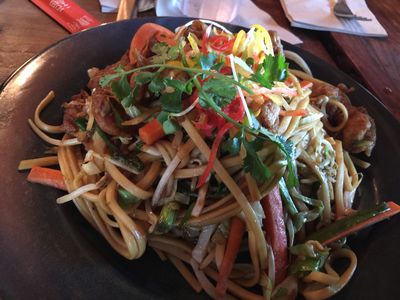 The chicken lo mein is served with a garnish of cilantro. Photo by Roan Poulter.

Chicken Tikka Masala – The legend, as was relayed by our server, is that during certain times of the year, large populations of Indians would come to the Yak & Yeti. The chef took it upon himself to add this dish to the menu to accommodate those guests. The report back from said anonymous guests is that this is authentic tikka masala.

I concur with this assessment; the flavors in this dish made me wish I had a second tongue. The chicken breast is marinated in yogurt and freshly-ground herbs, cooked in a traditional masala sauce, and served with jasmine rice and garlic naan bread. It's a large amount of food, and easily shared by two people. Just remember to save a little naan to wipe the bowl clean. 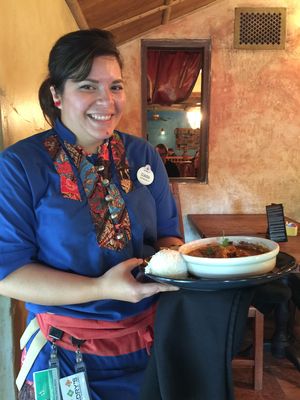 Our chicken tikka masala presented by a gregarious server who ensured our every need was satisfied. Photo by Roan Poulter.

Malaysian Seafood Curry – Ordered at the suggestion of our wonderful server, this was yet another surprise delight. I enjoy seafood, but usually avoid sauce-heavy dishes. The light coconut broth brought sweetness with a hint of spice to the dish that complimented the shrimp and scallops nicely. We played chopstick jousting as we fought over the mussels and littleneck clams. The fresh cilantro again added a flash of flavor that brought the whole dish together nicely. The ball of rice sank ever lower in the broth, soaking up the delicious flavor and forcing us to resort to spoons before the end. 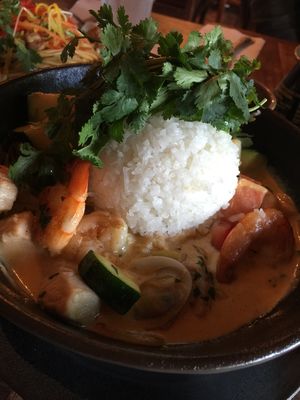 Those four items—one appetizer for two and three entrees—were more than enough to fill us. We waddled back into the park in search of a cool dark space where we could digest that masterpiece. It's Tough to Be a Bug is a great space for that activity, and if you got the right table, you already know the way. 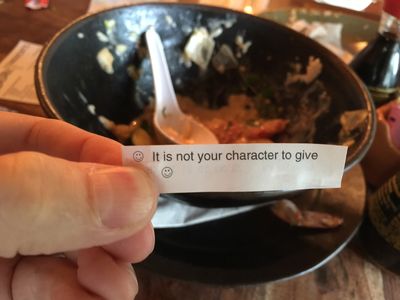 My fortune that I recieved on both occasions at the Yak & Yeti; under my thumb is the word "up." Photo by Roan Poulter.

Dad (41) – 4.9/5 – Food was the best ever tasted in a park. Theming is superb, staff is cordial and accommodating. A rogue air conditioning duct blew directly on our food, forcing me to hold off a perfect rating. Ask for a table upstairs with a view of the bridge.

Son (15) – 5/5 – Convinced that the Kobe beef burger must be his next meal. Loved the food and watching families melt down in the Florida heat outside.

Daughter (17) – 5/5 – Feeling triumphant after being the one to suggest lo mein. Convinced by the extraordinary food that World Traveler is her chosen occupation.

Reservations are easily made within the MyDisneyExperience App, online, or by calling (407) 939-1947 and are often available same day. If reservations are not available, don't let that dissuade you. We have never been able to reserve online, but have always gotten in. Don't forget Annual Passholders get a 10% discount, and Landry's offers one as well if you're a member of their club; the two discounts cannot be combined.