Disneyland celebrated a major milestone in 2015, and as big Disney fans, we were there to celebrate, too. The two biggest days last year were May 22, which launched the 60th anniversary celebration with a 24-hour party, and July 17, which is the actual park "birthday." We were there for both days for what I refer to as "Crazy" Disneyland. Yes, we are crazy, and we know it.

In 2005, when Disneyland was celebrating its 50th, there were similar events held at the resort. The kick-off of what would be the more-than-year-long celebration was in May (05-05-05). Back then, I was in college and I remember being there with my family and a group of friends to see the new fireworks show. It certainly was exciting. Then came July 17. My friend, brother and I were planning to be there for the celebration, but when we saw the news that people were lining up to get into Disneyland the day before, we knew we had to be in that line. We arrived at the Disneyland Resort around midnight to join the line of thousands, and thousands came after us, too. It was quite the experience to be in line overnight, waiting for the 8 a.m. opening. Crazy, right?

Fast-forward to 2015. I am now married (to someone who has learned to be just as much of a Disney fan as I am) and have 2 boys, both younger than 6. I knew that we had to be at the park for both of the celebration days. But what was that going to be like with two young kids?

May 22 was the 24-hour kick-off party. My husband and a friend were planning to stay for the full 24 hours, but I knew I couldn't do that with the kids (actually, they probably would have slept in the stroller overnight, but I would have been a mess). We got the kids in the car at 4:15 a.m. and arrived at the park just after 5 a.m. for the 6 a.m. opening. When we walked in the gates, Main Street USA was already full of people who were even more dedicated to being there than we were, but there were very few strollers that early. 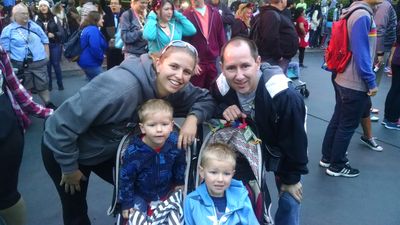 Up early, with the boys still in their jammies, but we were excited to be among the crowd on Main Street for park opening on May 22. Photo by Lisa Maulhardt.

Once we got in, we had breakfast (and waited in line for 30 minutes for food). Then, we checked out the new merchandise, started collecting the pressed pennies, and tried to stay away from the crowds by spending time at Tom Sawyer&39;s Island and riding the canoes. 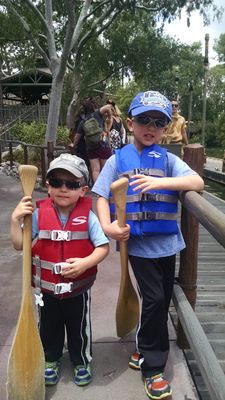 Even on the busiest days, the canoes may still have a short line. Photo by Lisa Maulhardt.

As we neared lunch time, we decided to try the Hungry Bear Restaurant in Critter Country, since it was a little more out of the way and—we assumed—less likely to be crowded. We got in line at 11 a.m. and it was noon before we got our food. The crowds were incredible!

Since my boys are at Disneyland all the time, they know that, after lunch, it's nap time. Yes, even my (now) 6-year-old still sleeps in the stroller.'That day it was extra-important for them to nap, since they were up really early and we were planning to stay late for the new Paint the Night Parade and Disneyland Forever fireworks. At 1 p.m., when they were both asleep, I decided to try to secure a spot on Main Street for the parade at 8 p.m. Yes, it sounds very early to find a spot, but Main Street was already full of people waiting. I was lucky enough to find a spot right in front of the Photo Supply, just behind another group of people. I laid out the blankets we brought and let the boys sleep.

When they woke up around 2:30 p.m, I knew we were in for a long haul since we still had several hours to kill before the parade started. Luckily, I had planned ahead. I had hit up the Target dollar bins the week before, and had new stuff for them to see—like building blocks, books, cars—as well as a deck of cards to play games. Disney cast members were pretty strict about saving space, so we were all in the same spot for most of the time, with the occasional bathroom break. After our lunch experience, I was concerned about getting dinner—how long it would take and how to stay in our spot to eat it. Then I remembered that Pizza Port in Tomorrowland sold whole pizzas and sent my husband to go get one at 4:30 p.m. to bring back to our spot. Twenty minutes later, he was back with our dinner. It worked out perfectly! The parade and fireworks were amazing to see for the very first time. For us, it was worth the long wait for a good spot. 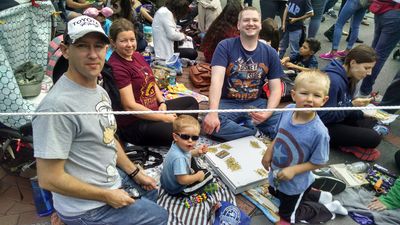 Toys, games, food and friends are all great ways to pass the time while waiting for a show or parade. Photo by Lisa Maulhardt.

I was so impressed by how well my boys handled their 18-hour day at Disneyland. It was nearly 11 p.m. by the time I got them back to the car to go home. It certainly was a marathon day, and we were facing another one for the July 17 celebrations.

Just like 10 years before, the line to get into Disneyland started the afternoon of July 16, but with the lack of excitement about the ceremonies at the park, it wasn’t anything like the 2005 party. We decided to sleep at home and get the kids up early again to head out to the resort. We were able to get a good spot for the birthday ceremony near the castle. Yes, I got my kids up at 4 a.m. to wait until 10 a.m. to sing "Happy Birthday" to a theme park (with Disney Legend Richard Sherman!). We got our birthday cupcakes and ended up heading home after lunch since there weren't any other "special" events planned for the day. 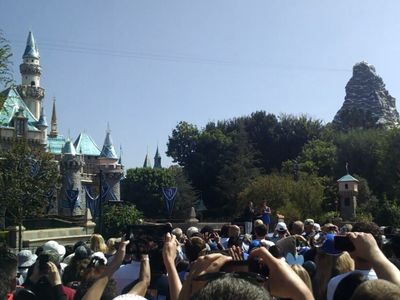 OK, so by now you might agree with me that all of this is crazy and has nothing to do with the average Disneyland Park guest, and yes, you would be right. Consider it an encouragement to those of you with young kids who are worried about your day at the parks.

Will you have to wait with your kids for the parade for seven hours? No, but it makes a wait of an hour or two seem like nothing. Not every kid is used to spending all day at a theme park, but there are some things you can plan for in advance. Bring some new toys, books, or coloring pages they can do while waiting in line or for a show. Pack lots of snacks, plan to eat early or at non-peak times, and know that it's not about doing everything while you are there. It's about making memories with the people you love, no matter how crazy those memories may be.