The Boardwalk: A Photo Tour

This time we're concentrating on a small area along Crescent Lake known simply as The Boardwalk. In keeping with Disney's Boardwalk Inn theme of an east coast beach community, The Boardwalk recreates the feeling of Coney Island, New York, around the turn of the last century. There are restaurants, small food concessions, midway gaming stands, and even a couple of dance halls. And while we normally visit this area only as a transition between Epcot and Disney's Hollywood Studios, there really is quite a lot to do. 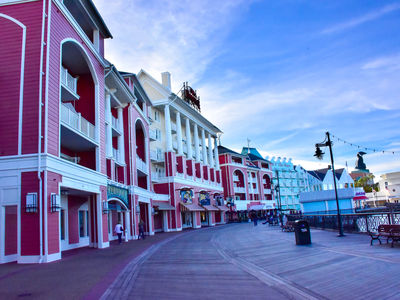 The boardwalk is nearly a quarter of a mile long, and aside from the storefronts on the first floor, it's mostly part of Disney's Boardwalk Inn Resort. There are 378 rooms at this deluxe hotel and 383 Vacation Villas dedicated to Disney Vacation Club owners. Photo by Bonnie Fink.

Most folks who visit the Boardwalk are probably staying at one of the resorts in the Epcot Resort area. Admission is free, but parking can be challenging. The only close by parking is at Disney's Boardwalk Inn, and they've started to be a little picky about who parks there. If you have a reservation at a restaurant, you can certainly park at the Inn, and you can always use valet parking, but free parking can be limited during certain times.

Let's begin our stroll along the Boardwalk and hopefully you can get a sense of what it has to offer. 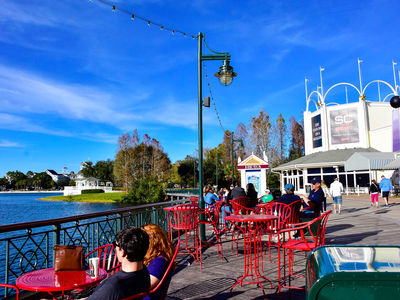 Outdoor seating is set up near the eateries, offering great views of Crescent Lake, which is alive with boat traffic and wildlife. Photo by Bonnie Fink. 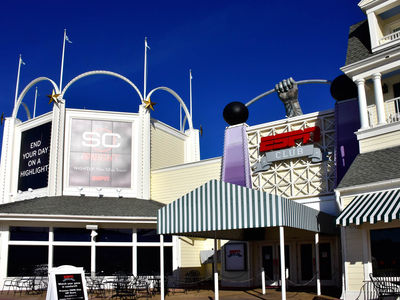 The ESPN Club is the first business you'll encounter as you enter the Boardwalk from Epcot. With nearly 100 video monitors, you can view many of the world's sporting events. The staff will also make an effort to put your favorite game up on a monitor near your seat if you ask. Photo by Bonnie Fink. 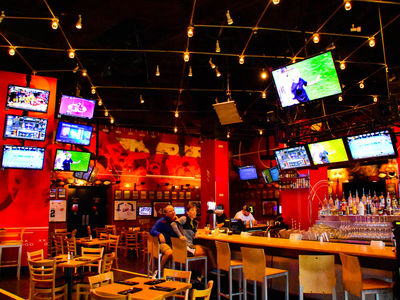 The ESPN Club is nearly 13,000 square feet of pure sports bar, but during major events it fills to capacity in a hurry. Reservations are a good idea. Photo by Donald Fink. 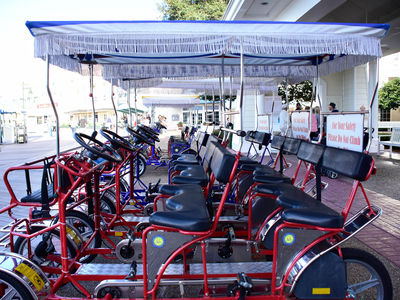 It was common to see surrey bikes along the Boardwalk of old Coney Island. Actually, it's still the case but you don't have to go to New York to try one out. Photo by Donald Fink. 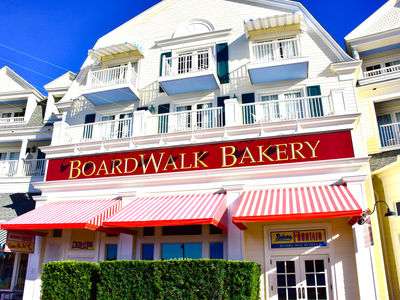 The Boardwalk Bakery should not be overlooked if you're in the area. They open for a quick breakfast with some hearty offerings including eggs and sausages, then serve pastries of all kinds throughout the rest of the day and evening. Photo by Donald Fink. 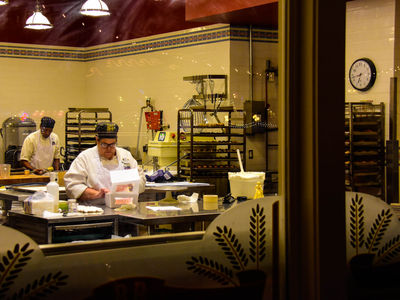 The bakery kitchen is adjacent to the retail space; items are baked on site daily. Photo by Donald Fink. 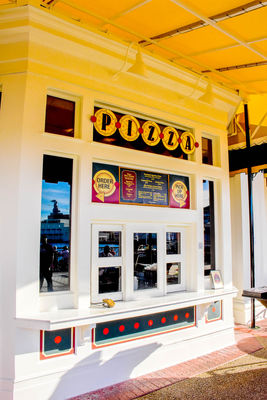 The pizza window along the Boardwalk is called, simply enough, Pizza Window. They offer to-go pizzas and other Italian-style quick service foods. There's nearby outdoor seating to enjoy your meal. Photo by Donald Fink. 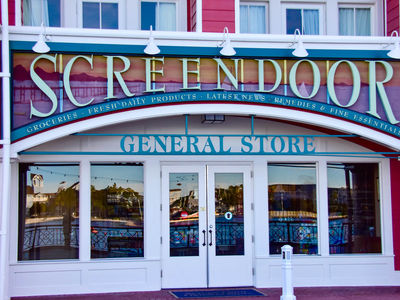 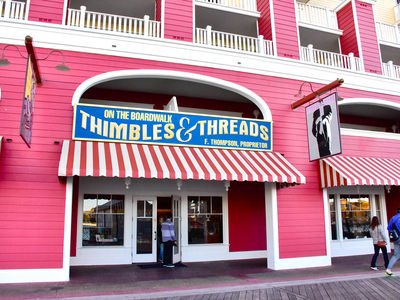 Thimbles and Threads is a general merchandise store near the Boardwalk Inn. You can purchase a variety of items here, including food souvenirs and Disney brand clothing. Photo by Bonnie Fink. 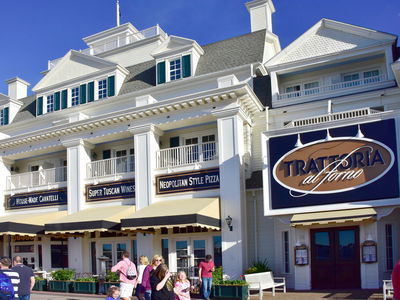 Trattoria al Forno is an Italian restaurant along The Boardwalk. It's open for breakfast and dinner; a reservation is a good idea for the dinner meal. Photo by Bonnie Fink.

The back story of Trattoria al Forno tells of a small family-owned boarding house and tavern along the Boardwalk at Coney Island, New York. It began around the turn of the century. As they slowly developed into a sophisticated restaurant, the dishes—which started out as purely Italian cuisine—evolved into a combination of authentic classical Italian food along with more progressive and innovative dishes. New menu items were added and improved upon as the restaurant was passed along to newer generations of the original family. There's a large selection of Italian wines to go with your meal, so wine drinkers will surely find something interesting. We had the pleasure of having dinner here a few weeks ago, and we will definitely be back. 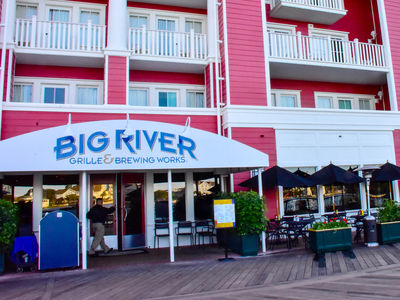 The Big River Grille and Brewing Works serves an all American menu. They also brew their own beers and ales. Photo by Bonnie Fink. 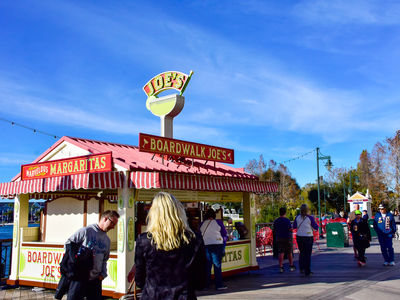 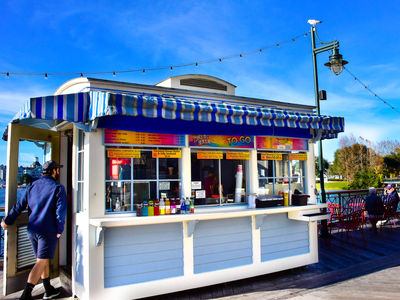 Disney's To Go is a concession stand along the Boardwalk featuring foods you might expect to see at Coney Island. Some of the choices are foot long hot dogs, fried ravioli, hamburgers, and corn dogs. Photo by Bonnie Fink. 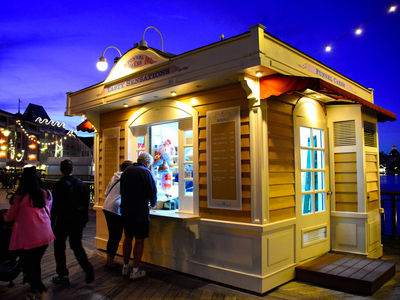 If you're in the area of the Boardwalk and need a funnel cake, here it is. At Tasty Sensations along the Boardwalk at Crescent Lake, you can order various funnel cakes, cotton candy, pretzels, and fried ice cream. Photo by Donald Fink. 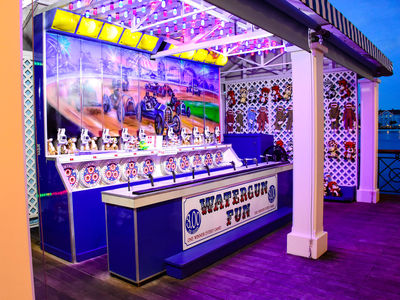 In the evenings, various midway games open for guests' entertainment. Typical of other Midway games, you can "win" stuffed animals and other prizes. Photo by Donald Fink. 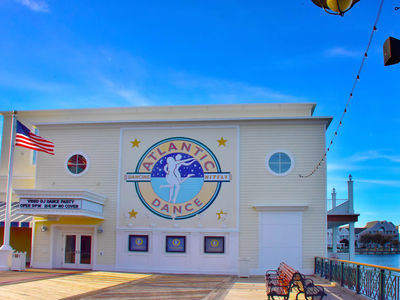 Atlantic Dance Hall is a night club that opens five nights a week, usually from 9:00 p.m. until 2:00 a.m. There's a DJ that takes requests, and there's no cover charge to get in. This venue is often used for private events so it's a good idea to check ahead. Photo by Bonnie Fink. 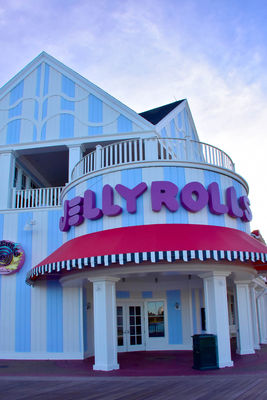 Jellyrolls is a sing along bar featuring dueling pianos. They take requests. The bar is open nightly from 7:00 p.m. until 2:00 a.m. Try to be there before 9:00 p.m. if you want to get in. There is a cover charge, and it's often standing room only if you arrive late. Photo by Bonnie Fink. 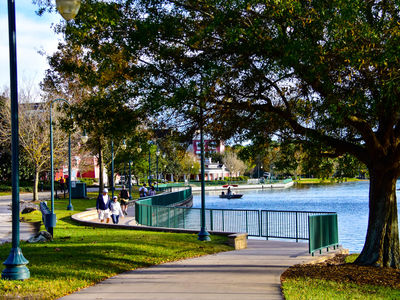 This path leaves the Boardwalk area and follows the canal to Disney's Hollywood Studios. It's about 1.5 miles from Epcot to Hollywood Studios and makes for a very pleasant walk, or run. It's one of our favorite paths on Disney property. Photo by Bonnie Fink. 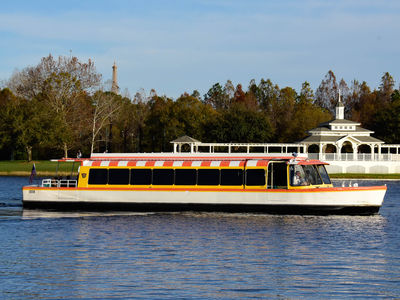 The Friendship class water taxi on Crescent Lake travels from Epcot to Hollywood Studios, with stops at the Boardwalk, Yacht and Beach Club, and the Swan and Dolphin. Photo by Donald Fink. 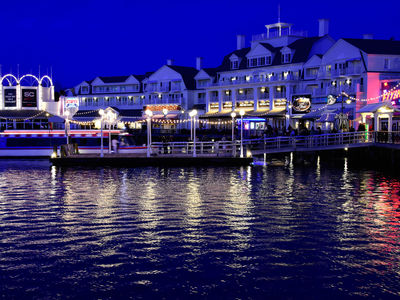 The Boardwalk changes personality after dark, with the accent lighting on the buildings and the reflections shimmering on Crescent Lake. Photo by Donald Fink.

Most of our experience with the Boardwalk is from our walks to and from Epcot and Hollywood Studios. We are usually just getting into aerobics mode when we pass by, so we don't stop. Occasionally, however, we've stopped in for a cup of coffee at the bakery or had lunch at Big River Grille. Not long ago we had dinner at Trattoria al Forno which was a very pleasant surprise.

We would suggest that you spend some time here on your next visit to Walt Disney World. If you're not staying at one of the Epcot Resort Area hotels, it's an easy walk from Epcot's gate between England and France. It's not that far (about a mile) from the entrance to Hollywood Studios either, and from both areas you can take a water taxi if you don't feel like the walk.