The Disneyland Resort Half Marathon Weekends: Eating for the Big Races

I'm a runner—well, sort of. So when I heard about the runDisney races a few years ago, I decided to give one a try. I ran the half marathon during the Disneyland Half Marathon Weekend and was proud that I finished before the dreaded "balloon ladies." When a runner can outdistance these villainous figures on pace, one can obtain the coveted finisher's medal. Since then, I've completed a few more laps, and then some, and learned how to navigate the runDisney weekend events, including the expo, merchandise queues, and, above all, the food.

A quick background on the races for those of you who are unfamiliar with them. Both the Walt Disney World and Disneyland resorts host several races a year, all organized by runDisney.

With 43 square miles available, the Walt Disney World races include everything from a 5K to a full marathon. There is even an E-ticket equivalent in the world of Disney running called the Dopey Challenge, consisting of the 5K, 10K, half marathon and a full marathon (48.6 miles all together) over the course of four days. Of course, with the races comes the afterglow, which includes fueling your body, making Walt Disney World a starving racer's paradise. A friend of mine just finished the Dopey Challenge in January and said she ate back her body weight around Walt Disney World.

What this all means is, with the addition of multiple race weekends, The Disneyland Resort has had to adjust menus and dining experiences to support the athletes and their families who visit. Thousands of racers and spectators descend upon Anaheim to partake in the festivities. That's a lot of food needed for hungry runners.

Hooray! An excuse to carb overload at Disneyland, because we all know pasta is a runner's best friend. Whether you like your pasta with alfredo, marinara or pesto sauce, there are plenty of places to get some throughout The Disneyland Resort. Mars-inara Meatballs is just one of the pasta picks at Redd Rocket's Pizza Port in Tomorrowland. Photo by Lisa Stiglic.

Across the way in Disney California Adventure, racers can choose ravioli at Boardwalk Pizza and Pasta or visit Downtown Disney's Naples Ristorante e Pizza for linguine and gnocchi specialties (don't forget the garlic bread)! And, there are several other carb options for runners throughout the Disneyland Resort, such as clam chowder in bread bowls, cheesy pizzas, and even rice dishes. One of my favorites is a marvelous Mediterranean meal at Paradise Garden Grill in Disney California Adventure. Skewer choices include chicken, beef or tofu (for the non-meat diners). Rise and shine. That alarm clock goes off early. Since I'm local, I usually grab and go a banana and power bar from home. However, for racers staying on property or meeting friends at the corral queuing, Downtown Disney has several restaurants open for portable meals. Signs are visible throughout the Downtown Disney corridor informing racers where the pre-race eats are located. Photo by Lisa Stiglic.

The best part of completing the half marathon for me, besides acquiring the medal, is deciding where to eat a hearty breakfast to fill my tired, sore body. The group of Disney friends I tag along (or rather lag behind) with always end up at La Brea Bakery in Downtown Disney. The restaurant offers an express line, as well as the standard sit-down option. Most racers just want to eat and rest afterward so the express location is where we go. There's a great variety, and guests can choose everything from breakfast sandwiches to muffins to oatmeal La Brea Bakery Express and the adjoining bakery are popular destinations for runners ready to rest and refuel after the big race. Photo by Lisa Stiglic.

Besides Downtown Disney locations, the Disney Resort Hotels offer great morning meals for athletes, including Storytellers Cafe at Disney's Grand Californian Hotel and Spa, which is a great place to meet up with the family afterward. Plus, the buffet offerings will satisfy the hunger pangs for a few hours, maybe. Another friend of mine raves about the pancakes (also available gluten-free) served at Steakhouse 55 at The Disneyland Hotel. The menu boasts a bountiful breakfast variety, including make-your-own omelets.

Believe it or not, a lot of race participants go back into the parks and walk, walk, and walk some more (showing off your victory medals is part of the fun). Besides, it's another opportunity to eat more. There are plenty of portable snacks throughout the parks, such as fresh fruit, pretzels, and the ever-popular churros. For a more substantial snack to savor, stroll on over to the quick-service window at Schmoozies in Hollywoodland at Disney California Adventure, home to the refreshing Mango Madness and Strawberry Sensation power drinks. 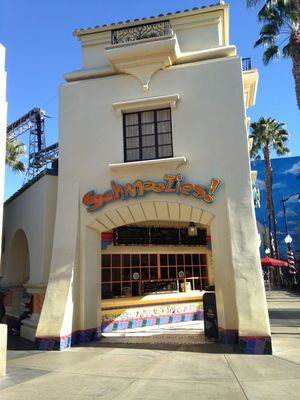 What do you do when you get to Hollywood? Schmooze. Head to Schmoozies for energizing smoothies. Photo by Lisa Stiglic.

So this concludes a quick food sprint throughout The Disneyland Resort. I'd love to end with dessert, but that in itself would have to be an entire article. Besides, I think I'd have to complete a few more races to balance out all the tasting. Maybe the Dopey Challenge? I'll have to "weight" and see.

A note on discounts

A reminder for diners, most places in the parks and Downtown Disney accept Annual Passport discounts. Schmoozies does not. Check Disney Dining for confirmation. For those of you interested in running a Disney race, go to runDisney.com for a schedule of the upcoming races. Note that registration can open as early as eight months in advance, but many races sell out quickly. Annual passholder discounts do not apply for races but holders can register earlier than the general public (limited amount).