The Indians Lose Their Land

Although Disneyland's Rivers of America has been down for nearly four weeks now and some tarps have been installed on the periphery, the only big sign of the major construction-to-come is the abundance of closed attractions. Otherwise, the river seems eerily tranquil.

Yet backstage and on the back side of the river, the demolition has begun. They've started to pull up train tracks. The Friendly Indian Village is now gone, and its former inhabitants packed away presumably to be relocated to the smaller back shore after the river is shortened. By the end of this week, all other show pieces that are out of guests' line of sight should also be gone. 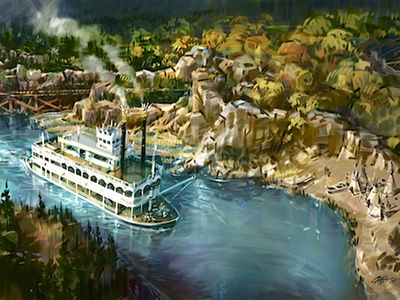 Concept art for the reconstructed Rivers of America shows a new train trestle along with a Native American village. Photo ©Disney.

On Tom Sawyer Island, Tom & Huck's Treehouse—closed for years due to American with Disabilities Act (ADA) and lawsuit concerns—will be demolished. As one glimmer of hope, tentative plans are also to eventually tear down Fort Wilderness 2.0 and rebuild it the way it was; guests can once again enter and it will feature a canteen where visitors can buy snacks. Big Thunder Ranch will be leveled, although Imagineering has tagged the cabin (formerly known as Esmeralda's Cottage) to be dismantled and saved so it can be "retasked."

Last week, the stables at the Circle D Corral were torn down and the "Pope House" was on its way to its new home in the Team Disneyland Anaheim visitors' parking lot. In fact, an entire block of backstage support facilities—Enviromental Affairs, the Security Kennels, the Service Garage, Fantasmic float staging and maintenance, and several maintenance shops—is also being removed and relocated.

Cast members I talk to continue to have misgivings about all the disruption the addition of Star Wars Land is causing. "Is it worth it?" they ask. In the Roundhouse, those familiar with the locomotives have expressed concern about the Railroad's new route, which includes a 3-percent grade increase as the trains make their way along a trestle over the back of the River. Will the trains be able to take the climb with a full load?

And hourlies aren't alone. As one shared, "I overheard two Imagineers talking backstage about the project. They didn't sound too confident, and I got the impression that Walt Disney Imagineering bit off more than they can chew. Think about it: Cars Land was built on pretty much an empty parking lot backstage. Not much [was required] as far as prepping for building a new land." As the back quarter of island and the river get sized up for elimination, the same cannot be said for Disneyland's coming resettling of the West.