Star Wars Land Details About to be Revealed Soon

A lot of what I'm going to offer here will become outdated on this coming Sunday, February 21. That's the day of the television special, "The Wonderful World of Disney: Disneyland 60" (8:00 p.m. on ABC), which will have segment devoted to sharing details about the coming Star Wars land hosted by none other than Harrison Ford himself. I've been making many conjectures about these new park attractions over the last couple years and I'm excited to learn some more specific information and hopefully see some visuals or renderings of the park with some details about the rides and the work going into them. I'm not sure how much information we will actually get, especially since the program has a lot going on.

I wish this program was like the old shows hosted by Walt Disney himself, with a conversational approach and low-key tone that allows us to take in the details and even talk to the creators and imagineers. But no. Disney, like every media producer thinks, it instead have long lists of big celebrities, fireworks, musical guests (Elton John probably singing "Can you Feel the Love Tonight"), and lots of leggy dancers learning crazy routines while wearing sparkly frills with sequined streamers. There will probably be no hint of the quiet dignity Walt Disney would convey. Harrison Ford's segment is probably going to be cool, especially with less-grumpy Ford these days. But I want to hear from the creators; I love to witness some of the creative process like Walt used to show.

Back in the day, when people first saw Star Wars back in 1977, there were fans that would even ask the model builders and special-effect engineers for their autographs. People don't always just seek the actors and celebrities—we appreciate more and more these days those who are behind the scenes, creating the spectacles and rides that we will experience. Why does everything need to be some mother-of-a-blowout, seizure-inducing, stimulus-overloaded party?

Yes, by all means celebrate, but treat it like your mom's 60th—have a nice dinner, chat about the old times, look at what's new, bring some gifts—don't blow up half the sky and destroy our ear-drums just because that's the only way you think TV viewers will think this is a special day. Lord knows what's going to happen, if anything, for Walt Disney World's 45th anniversary this year.

Regardless of how much substance over spectacle we will see in the TV special, Star Wars land is coming, and after the great success of The Force Awakens (which has given the Disney company its highest-earning quarter ever) we can be expecting amazing things. But what do we know so far going into this TV program?

We know the Star Wars land is still going to be 14 acres in both Disneyland and Florida's Disney Hollywood Studios parks. That size immediately presents particular challenges for Disneyland. Thunder Ranch will be gone and a slice of the Rivers of America will be cut (though not quite as much as originally thought). It will be challenging connecting the new land to Critter Country to form one of its entrances. It looks like Toontown will survive, but needed updates to Tomorrowland will now be delayed.

It is still not all that easy for Disney Hollywood Studios even though there remains the "blessing of size" in Walt Disney World. Dealing with swampy lands and water tables in Florida must be difficult without just wiping everything out and creating new ground. And although we're saying goodbye to Lights, Motors, Action and the Backlot Tour attractions, as well as the iconic Earful Tower (now that, I'll actually miss), the Star Wars land addition (along with Toy Story Land), will be a shot in the arm to the Studios park. We all hope that with these two large expansions, Hollywood Studios will once again be a must and an all-day experience.

For Star Wars land, what attractions are we talking about?

One has been dubbed the "Battle Escape" attraction and from its scant details, seems to be the largest show building in Star Wars land, the biggest one in Disneyland, and one of the biggest in Walt Disney World. Just its sheer size has fans intrigued. It will include an expansive queue area that includes X-Wing fighters in some way (which may be interactive or just great to look at). The ships and the queue will serve as a a sort of Act I to the experience. The ride itself has been said to take place in the timeline of the new trilogy, where the Resistance faces the First Order. There is a rumor that Battle Escape will somehow be a ride without a track; perhaps it will have a hidden track—it remains to be seen how that will function. This ride will probably not be a simulator type of ride because that sort of experience wouldn't require such a large show building.

Speaking of smaller buildings and simulators, the Millennium Falcon attraction will be a little less than half the size of Battle Escape, but not small by any means. It will include a themed queue, but the queue will also have some sort of pre-show in its own separate building. We don't know too much about this one, either, but the whole two seconds about it from the special's TV spot shows the cockpit of the Falcon in what appears to be a motion simulator. Before you groan too much, it is supposedly going to be a bit more interactive and advanced than previous simulators (like Star Tours) because, according to Bob Iger's initial announcements, it will be "customized" in some way. What that means could be a random set of destinations and scenes like in Star Tours, but it could also be related to something else he said, that of being able to "take the controls" of the Falcon. If you truly take the controls, then you may get to choose where you go and may get to choose what mission you take.

This reminds me of Horizons back in the day in Epcot. In Horizons, you didn't necessarily take controls of your ship, but you did choose a scene in which to fly. At that point of Horizons, all riders in the car would press a button for their desired destination—with choices of water, desert, and space sense—the majority would win and the ride would fly you through that scenario. For the Millennium Falcon ride, you may have to do other things in the mission while you're there such as blast enemy ships, make turns around asteroids, and jump into hyperspace. These ideas sound a bit like Mission Space currently in Epcot where each person has specific duties to perform during the journey. However, I pray that this won't be a centrifuge ride or it will be the Millennium Vomit.

Those are brief glimpses of what the two major attractions will be. Both are supposed to have some amazing queue areas and pre-shows which will add to the immersive feeling of Star Wars land but those ideas also address how they handle long lines of people and exhausting wait times. This is something the Disney parks have tried to address in recent years with attractions like Dumbo in Walt Disney World with its new interactive queue area (and a second Dumbo ride altogether).

It's pretty much a foregone conclusion that there will indeed be a Star Wars-themed Cantina eatery. I hope the theming matches as closely as possible the look and feel of the original Cantina from Tatooine, which is one of the most iconic scenes from the original movies. This scene had such an impact on viewers because it was so Earth-like but at the same time it was so out of this world. It should have the tables, the bar, the band (animatronics are fine here), some costumed characters, plenty of seating, and most importantly, an excellent menu. 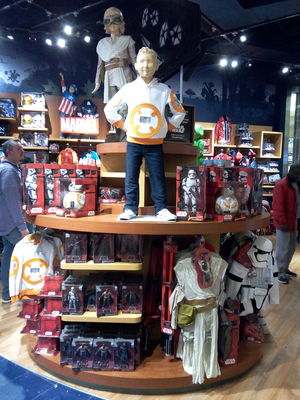 There will be a second place for dining in Star Wars land and I don't think much has been revealed about that. It ought to be well-themed and highly immersive, too. Universal Studios made immersion its top priority in the Wizarding World of Harry Potter. The Harry Potter franchise, especially the books, had a lot of food and drink to defictionalize like butterbeer, chocolate frogs, and every-flavor beans. It also had a lot of stuff ready for making into souvenirs, like wands, brooms, jewelry, and robes. What kind of stuff like this does the Star Wars franchise have? It had blue milk in Star Wars. And recently in The Force Awakens, we saw Rey's rising bread in her desert home inside an AT-AT. Other than that, there's not much else food-wise to draw on in the franchise. There was that time in Empire Strikes Back that Yoda took a bite of Luke's dinner and disgustedly reported, "How you get so big with food of this kind?" Likewise, Luke didn't think too much of own Yoda's stew. Maybe the new dining place could be Yoda's hut called, "Good Food, Hot." 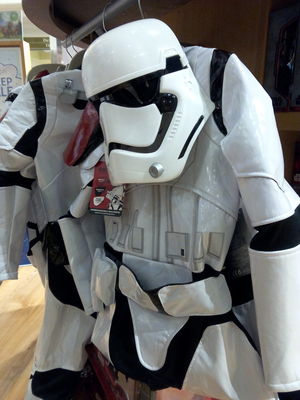 With the merchandise, it has been around for more than 30 years, and stuff at Star Tours' Star Traders shop has been around a long time, too. But what can they bring that's new? What can there be that isn't in department stores now? Costumes, lightsabers, shoes, hats, action figures, remote-controlled BB-8s, bumper stickers that say "My other car is a Tie Fighter." Disney has never been too short on merchandise ideas, and Lucasfilm has been at it since 1977. 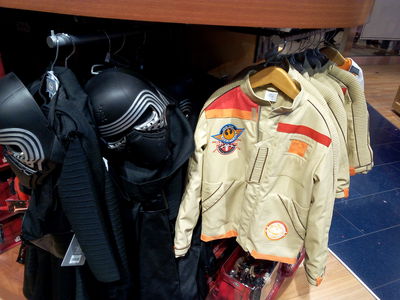 Disney Store costumes include Kylo Ren as well as a Resistance jacket worn by Poe and Finn that could be worn any day. Photo by Todd King.

For this new land, what kind of Star Wars park exclusives will there be? I would really like to hear your ideas in the comments below this article. I think costumes could be a big thing: they should have Darth Vader masks, Boba Fett helmets, new and old Stormtrooper (and Clonetrooper) uniforms, X-Wing pilot outfits, etc. Also, what kind of new technology could they bring to lightsaber toys? Maybe one shop could be themed after Maz's castle and you can discover some cool stuff if you look around like Rey did in the movie. I'm rambling here but the point is, the immersive experience really does continue into the shopping so I hope Disney goes wookie-wild here. 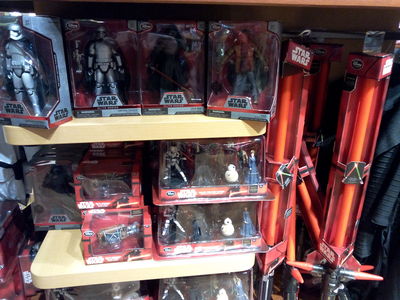 You gotta have the meet-and-greet opportunities. They're already there at Star Wars Launch Bay. That's pretty cool. They've had Chewbacca, Darth Vader, and now, Kylo Ren. Will we see Rey? I mean, they find actresses to play the parts of Cinderella and Jasmine, why not Rey? She's awesome and recent press about the lack of Rey merch shows people love her. How about Finn? And Poe? They would be cool to meet, too. Will there be some new Star Wars parades? Maybe have some Stormtroopers on dewbacks! The Force Awakens and its emphasis on real sets and practical effects made the movie feel real and now let's bring that idea to the immersive experience we desire in the new park. It needs to feel real.

If anyone can bring this kind of magic to the world, it's Disney. Wow us, Disney, wow us.